The curious case of Silverstone 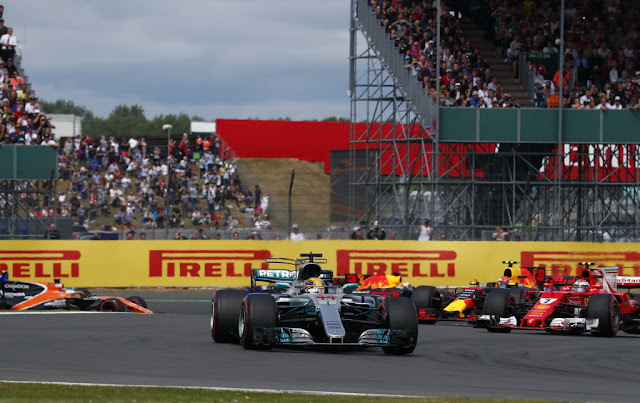 At the season's halfway point Silverstone represents a significant milestone in the battle for the 2017 championships. Mercedes have extended their lead in the battle for the constructors title over their Italian counterparts, whilst the gap between Vettel and Hamilton is down to just one point. Once again tyre failures played a significant role in the outcome of the British GP and now the attention turns to Pirelli as the tyre manufacturer investigates the cause of Ferrari’s issues in the closing laps of what was a fraught Grand Prix for the Scuderia.

Silverstone was always going to be a challenge when it came to tyres, given the increased demands, as the 150mph barrier was broken in terms of average lap speed and lateral loads in excess of 5g were sustained.  The high-speed clockwise nature of the circuit puts the left-front tyre through extreme torture as the tyre’s shoulder is heated up and whilst the early safety car to clear Sainz’s car swung strategy toward a one-stop race it came with the risk of pushing the tyre into an uncomfortable window.

Ferrari found themselves between a rock and hard place early on as Vettel was unable to clear Verstappen in wheel-to-wheel combat, forcing the team to box the German earlier than was ideally planned.  This allowed them to clear the Dutchman during the pitstop as he lost out through time stopped in the box and the advancement of Vettel as the undercut allowed him to take some life out of the fresh tyres and lap time out of Verstappen. Stopping on lap 18 was an extreme compromise for Ferrari though, with the pitwall knowing that their driver would now have to eek out the life of the tyre for 33 grueling laps save any climatic changes that may call for a set of wet weather tyres.

It could be argued that their undoing was racing the Red Bull rather than being mindful of the charging Finn behind, as Bottas at the wheel of his W08 started the race out of position and on a contra tyre strategy to those around him. Knowing he’d take a five place grid penalty it was decided that Bottas would try to squeeze through Q2 in qualifying on the soft tyre, which of course is used as your race tyre should you make it to Q3.

Bottas’ first stint was impressive using the clean air afforded by the other drivers making their pitstops to be second on the track but a net fourth come his own pitstop at the of lap 32.  This paved the way for an even more impressive drive through the field to claim second place, passing Vettel en route and may have caught Raikkonen on track at the end of the race had it not been for the Ferrari drivers tyre delamination.

What Bottas’ race and to a slightly lesser extent - Daniel Ricciardo’s first stint proves is that although the soft tyre is considered the better race tyre, ie it should be able to go further in a race whilst providing little drop-off, this is extremely setup and temperature specific.  One thing that jumps out to me at this point is the known temperature working ranges for each compound of tyre. The soft tyre is classified as a high working range compound, at its best somewhere between 110-140oC, whilst the super soft tyre is in the low working range, performing at its best between 85-115oC. It would appear that on that given day, with the loads being generated that the super soft was actually the better race tyre - of course this was complimented by the W08 and RB13 chassis’ which appear to have flourished in the hands of their respective drivers.

Much of this, in my opinion, can be put down to the way in which each car’s concept suited the demands of Silverstone something I covered in detail for Motorsport.com earlier in the season - https://www.motorsport.com/f1/news/tech-analysis-the-concepts-that-split-mercedes-ferrari-and-red-bull-882735/. Perhaps the biggest takeaway though is how the disadvantage that many have talked about in the opening stages of the season - in terms of Mercedes longer wheelbase perhaps played into their hands here, with the elongated W08’s kinematics allowing them to maintain the optimum core temperature in the tyres over both stints.

This is a topic that we’ve circling for several races now with the shorter wheelbase Ferrari clearly more adept at bringing the tyres up to temperature and maintaining it on the low to mid speed circuits to maximise performance.  However, at Silverstone they were just on the wrong side of the curve, perhaps not helped by the team feeling the need to chase a slightly lower downforce configuration - utilising the ‘spoon’ shaped rear wing they ran in Baku, having initially pursued a setup with the conventionally shaped rear wing. 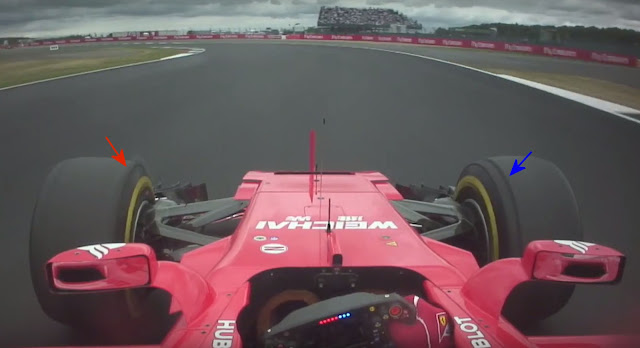 Turning our attention back to Ferrari, Pirelli have already stated that the issues faced by Raikkonen and Vettel are different in composition, mainly owing to the fact that Kimi’s tyre did not deflate, rather the tread platform began to break up.  As we can see from the onboard both front tyres were heavily marked, with the graining caused by load and temperature spikes building on the tyres surface and edging toward the inner shoulder. The left-front tyre had already begun to unravel on the lead up to the Wellington straight with a frayed edge pulling the tread away from the carcase (red arrow).

On lap 45 FOM played in a message from Vettel to the pitwall -
“I have no more fronts, they’ve been blistering for twenty laps - I have zero fronts” 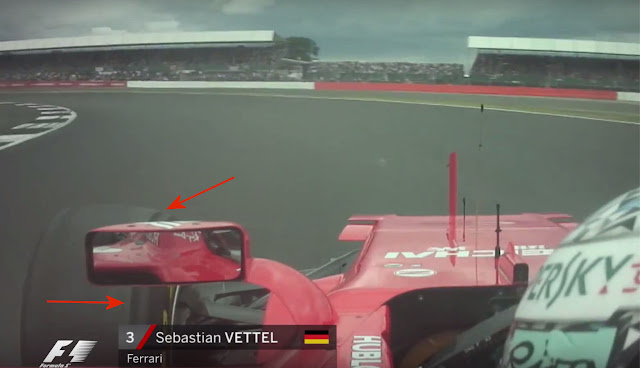 This was a problem exacerbated by his wheel-to-wheel duel with Bottas as the Ferrari driver locked up in defence of his position, dramatically heating up the tyres and further blistering the tyres surface. Now they say an image is worth a thousand words so I’ll use the GIF stolen from the depths of Reddit in order to illustrate what I’m talking about here - the tyre receives a great deal of energy in a very short burst as it under rotates and then locks, this is disastrous when we consider how finely balanced the tyre temperature eco-system is, creating a sort of seesaw that is difficult to reign in once in motion.

The next few corners are critical after such an event as the driver must move gingerly as he tries to reduce the tyres core temperature which has increased due to the spike in surface temperature. This inevitably leads to a loss in apex speed and lap time and in Vettel’s case it was compounded by the fact that Bottas was still applying pressure and Vettel didn’t want to yield the position.

Ultimately I suspect Pirelli's findings will suggest it was a combination of factors that lead to Vettel’s tyre issue, all of which centre around the creation of surface blisters from overheating the tread’s surface, leading to a loss of pressure as the blister continued to open up. Raikkonen's issue isn't so cut and dry, given the way in which the tyre let go but again I think the focus will remain on their setup when compared with those around them, with the tyres graining toward the inner shoulder due to suspension and chassis settings unique to them, which as you'll note from the GIF above is heated more aggressively due to the camber angle run by F1 teams.