New York, New York, so good they decided to race it twice.... That's right, Formula-E lands in New York for the first time this weekend so for anyone lucky enough to peeking through the fences at the all electric race series here's a guide on how to get there and what to do when they're not racing from our very own local - Matt 'Trumpets' Ragsdale...

Those of you headed to NY for Formula E this weekend in Brooklyn’s Red Hook neighborhood might be wondering about the best way to get to the race. As someone who’s lived in NY for the past 30 years, I’m here to give you some practical advice.
Step 1: Do not drive. Really. Trust me on this. I’m not selling you a bridge, so to speak. Having been to the track to take pictures of construction, I will happily attest that in the middle of the day on a Wednesday with no race going on, I had to park in a highly dubious manner just to wander around and get some pics.
If you must be shuttled about in an antiquated petrol burning machine, then I highly recommend the services of Lyft, Uber or a Yellow or Green cab. Technically, Yellow cabs and Green cabs are for street hails (no, there are only a few stands, mostly in midtown near Madison Square Garden), and if the light on top of the car is lit, it’s open for hire and in NYC, Cabs are not legally allowed to refuse a fare. Technically, Yellow Cabs can operate anywhere whilst Green Cabs are restricted to the outer boroughs (everything but Manhattan), but since you have nothing to lose, definitely go for it regardless of colour. You could also book a car service (Arecibo FTW) but you’ll need to give the driver an address so be prepared.

Step 2: Public Transit: You may, should you follow me on twitter (@mattpt55), have seen me rage tweeting at the NYC subway and/or our Governor, or even heard of the emergency meeting that has been called to solve the issue of our crumbling and ill-funded infrastructure. Possibly you’ve even heard of the massive and catastrophic shutdown that will make this summer memorable to dedicated straphangers for all the wrong reasons. Rest assured, despite the stories of trains delayed for hours, escapes made through smoke filled tunnels, and derailments, bouncing about the twittersphere that the biggest problem faced by most riders is that the trains are no longer reliably getting them to work on time. In other words, leave extra time. (Fortunately for you, dear reader, I will be giving you the lowdown of a few places to visit within walking distance in the next installment of my series). 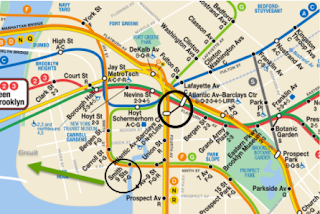 The closest train stop to the race is on the F train, at the Smith/9th street stop. Take a moment to enjoy the view, for despite its being called a subway, that particular stop is the highest point in the entire system and will afford you several, properly touristy views for stuffing the hungry maw of your Instagram feed.  At the foot of the station, there will be shuttle buses waiting to whisk you into the general vicinity of the track.  If  you’re coming from Manhattan you’ll want the Coney Island Bound, Stillwell Avenue bound train (directions are usually noted by the terminus)  and if you’re further out in Brooklyn, then it’s the Manhattan or Queens bound train you want. And yes, there are usually little placards on the platform that tell you what direction a train is headed. Best places to transfer if you’re starting your fun on a different subway line, are at either the Jay Street/Metrotech stop and/ or West 4th Street.

Alternatively, take almost any other train to Atlantic Ave/Barclay Center, where you can also grab a shuttle bus to the race.  Do take a moment to download a map to whatever device you will carry with you, as the maps on the trains tend to be obscured by peoples’ heads, making it awkward to figure things out.

Step 3: Alternate ways to get to the event: You could just walk. Or download the citibike app and bike there ( I will warn you, Red Hook does have it’s fair share of cobblestones though).  A day pass is $12 for unlimited rides less than 30 minutes. The closest docking station to the event is supposed to have a valet so more bikes can be ridden to the event, but do check the map in the app to make sure bikes are available, before setting out.
Lastly, yes, you can ask a New Yorker for directions on the subway. Generally, they will want to help you get where you are going so you stop slowing them down. Good Luck and see you there!!

So, you’ve come to New York to see the ePrix only to discover that Red Hook looks nothing like
what you always see on the telly. That’s right, if you’re being polite, it’s a warehouse district that
remains an active working waterfront and commercial area. As a result, it might seem
intimidating to wander loose, yet the fact of the matter is, within steps from the circuit are some
amazing places and if you’re here for both days, no doubt you’ll be looking for something to do
within walking distance because you didn’t drive (see part 1 if you weren’t clear on this).
Fortunately for you, dear reader, I have been shopping in this nabe for 12 years and am prepared
to give up a few of its secrets to you. 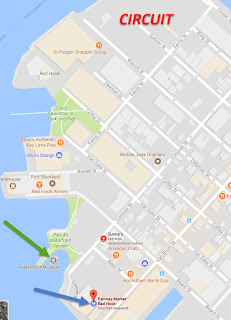 Breakfast at Fairways. Not much to add, other than look at that patio. Included with your cheap breakfast are views that the folks upstairs are paying a lot more for than the $6 you just shelled out for pancakes etc. Or just grab a coffee/tea and have a sit, enjoying the early morning boat traffic on New York Harbour, with the Statue of Liberty and Manhattan as your backdrop. Then wander down the path past the Waterfront Museum (yes it’s a thing) and keep on going till you
hit the circuit, about a 5 minute walk for your average New Yorker. 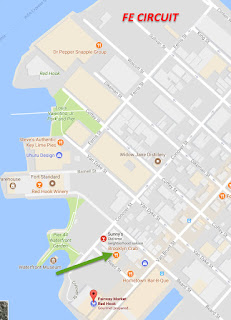 Dinner at Brooklyn Crab. Pretty much the same as Fairways, only the deck is on the 2nd floor and is definitely aimed at the catch a sunset crowd. The seafood is a bit more pricey than the
pancakes at Fairways across the street, but who cares, the serve booze too! If you are really looking to be active, there once was putt putt on the ground floor but caveat emptor on that one. 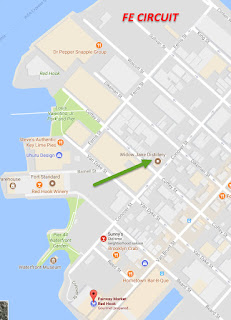 Finer things. Cacao Prieto is the place you should go if you happen to hanker after high end, exquisite chocolates. Owned by the family that produces most of the cacao from the Dominican Republic, run by a chocolatier from Paris, in addition to tasty delicacies they also offer factory
tours as all their products are produced on site.
On the other hand, if you’re after something of a boozier nature, Widow Jane distillery is right next door and offers tours as well. In fact, they are sister operations so a tour of one will get you through both operations. Tours aren’t free and can
be booked in advance at widowjane.com/tours/ though they do include a tasting. If you’re interested, that is. 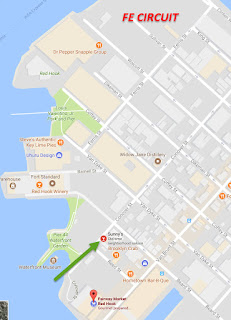 Low Life. Of course, if you’re in the market for authenticity, there can be no better experience than Sunny’s Bar, right around the corner from Brooklyn Crab. The only thing that can ruin thatis all the other authenticity seekers. Still, if you’re after the feel of what the neighborhood wasbefore it got expensive, then Sunny’s is decidedly the place. I’m betting the beer will be a bit cheaper, too. www.sunnysredhook.com

Vino Veritas. For those of you who prefer you’re grapes fermented, the Red Hook Winery has a tasting room that’s second to none for it’s view. Beautiful wines and a strong point of view adequately express the various offerings on hand. Abe Schoener makes interesting wines and if you can find the time to wander over, it’s decidedly worth it. www.redhookwinery.com 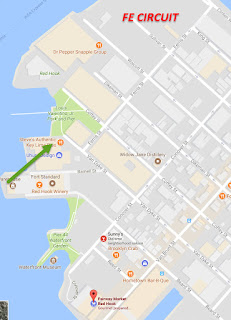 Sweet Tooth. Check out Steve’s Authentic Key Lime Pie on the the way to the winery if you like for an exceptionally tart and delicious treat. Go on, your waistline says no but your tastebudsbeg to differ.

Slightly further away. Sixpoint Brewery is next up on the list, and their variety of
craft beers (I am partial to the Sweet Action, if you’re asking, but find it on tap if you can) makes
their lack of a public space all the more tragic. Don’t despair, though, as they are set to be open
by 2018 with a proper tap house. Van Brunt Stillhouse is raring to go, however, and they offer a
fully functional tasting room and a variety of highly distilled and delicious delights.
www.vanbruntstillhouse.com


And if you’re looking for a late night, then check out the tasting room at Other Half brewing.
Located just 2 blocks from the Smith/9th street subway that’s closest to the circuit and
conveniently near where the shuttle bus will drop you off, Other Half is one of the finest craft
brewers in the city right now. Bonus, show up early Saturday AM if it’s a release day (check the
calendar on the website before foregoing sleep, natch) and grab some cans for the hotel room!!

Protip: Pick the smallest size glasses or you will be very, VERY sorry. 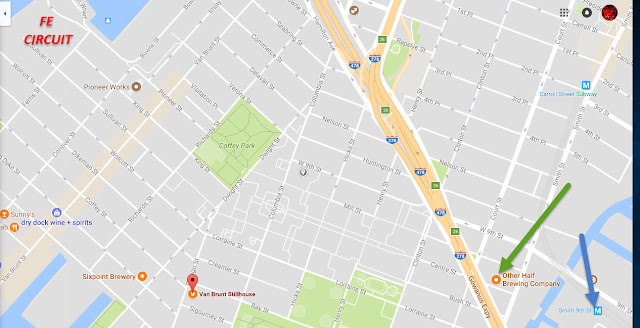 Enjoy the ePrix and should you feel the need to ask an actual NY’er, hit me up Twitter
(@mattpt55), anytime.