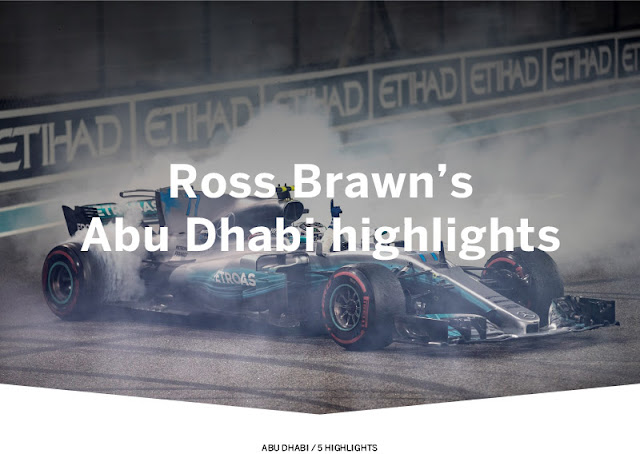 Silver Arrows sign off in style.
Mercedes ended the 2017 campaign in fine style with a dominant performance at the Abu Dhabi Grand Prix, and with Valtteri Bottas winning from team-mate Lewis Hamilton.
On Friday, it seemed as though Ferrari and Red Bull had closed the gap slightly to the champions, but on Saturday and Sunday the Silver Arrows delivered an unequivocal response, with pole winner Bottas marginally ahead of Hamilton in qualifying but half a second clear off the third-placed Ferrari of Sebastian Vettel, and victorious in the race almost 20 seconds of the German who was again third behind Hamilton.
Bottas ended his first year in a top team in the best possible way. The Finn had a strong start to the season, but after the summer break, his team-mate got the upper hand. Had Valtteri gone off the boil? Yes, but Lewis had stepped up a gear and, with the exception of qualifying at Interlagos a fortnight ago, from Spa onwards it was 'Hammer Time', the Englishman also seeming to develop a more mature driving style. For Mercedes, Sunday's result contributed to a season-total of 12 wins, 15 pole positions, 9 fastest race laps, 4 one-two finishes and 668 points – a simply amazing season. Once again, congratulations to them for a job well done.

Ferrari step up
That's four years on the trot that Mercedes have been the grid's most potent force. This time, however, it had a worthy opponent in the shape of Ferrari. Vettel led the Drivers' classification for a long time, but then came a bad spell of three races – Singapore, Malaysia and Japan – that compromised the German's chances of taking the title fight to the wire.
That was a shame, as it would have been great to see a tight duel all the way to the end, just as it had been up until Monza.
The results didn't come even though the Maranello car was always competitive: proof of the good job done by Ferrari's Chief Technical Officer, Mattia Binotto and his team in preparing and developing the car over the course of the season. Now they need to dig deep to take the fight to Mercedes all the way to the end of 2018. Ferrari know what is required and I'm sure they will prepared right down to the smallest detail over the winter.

Levelling the playing field
The Abu Dhabi race confirmed in no uncertain terms the huge gap between the top three teams (Mercedes, Ferrari and Red Bull) and the rest of the grid. After 10 laps, seventh placed Nico Hulkenberg was already 19.170 seconds off the leader, which grew to 85s by the end of the race. And here we're talking about an exceptional driver and a factory team representing one of four major automotive manufacturers in Formula 1.
I think we have a duty to look at ways of making the championship more balanced, without resorting to artificial or improvised means. That's why, for several months, working first and foremost with the FIA and the teams, we have been looking at ideas to make the sport we all love, more interesting. That's what the fans want, as has been seen from the research we have carried out over the past few months and let's not forget that they are the sport's most important asset.

Formula 1 makes a new mark
The Abu Dhabi paddock was the scene of two events, which one way or another, are symbolic for the sport. The first was the unveiling of the new Formula 1 logo, which came immediately after the podium ceremony. Over the past few days the question was asked as to whether the logo is really a major priority and the answer is yes. Apart from the commercial aspects, the new logo is much more flexible in terms of its use, especially when it comes to its application on merchandising and in the digital world. It has impact. The old logo was neither iconic or memorable. It was important to let Formula 1 fans see that we are entering a new era. Our sport is changing and must look to the future and also outside its own environment if it is to attract new fans, especially among the young. We believe this logo exemplifies this desire: in a world where visual communication is ever more important, we must also move in this direction.

It's all in the game
And on the subject of getting more youngsters to follow Formula 1, the Yas Marina paddock hosted an amazing event, the final of the first ever F1 Esports Series, which featured 20 drivers going head-to-head to take the World Championship title. The winner was Brendon Leigh, an 18-year-old from England, who beat two other very young competitors, Chile's Fabrizio Donoso Delgado and Germany's Sven Zurner. I had the pleasure of meeting them on Sunday and I was struck by their enthusiasm, their youth and the passion they demonstrated for something we must now consider a real sport, which has in fact been recently recognised as such by the International Olympic Committee.
I must admit that, purely down to my age, I'm not a user of games consoles and that sort of thing, but I realise that younger generations live their sport through these new (to me!) methods.
At Formula 1 we strongly believe in esports and that's why we wanted to host the final title-deciding round of the 2017 season in the real paddock. And judging by the interest generated by the event it was the right decision.
On Saturday night, there were a lot of people in the paddock, including drivers and engineers, all watching the final on the giant screens and they clearly found it exciting, especially Leigh's last lap overtaking move, which saw him win the race and the title. How good would it have been to see something like that on the real track. Moves like that do sometimes happen for real – I'm thinking of the 2008 finale in Brazil – but wouldn't it be nice to see it happen more often?
Tagged
Newer Post Older Post