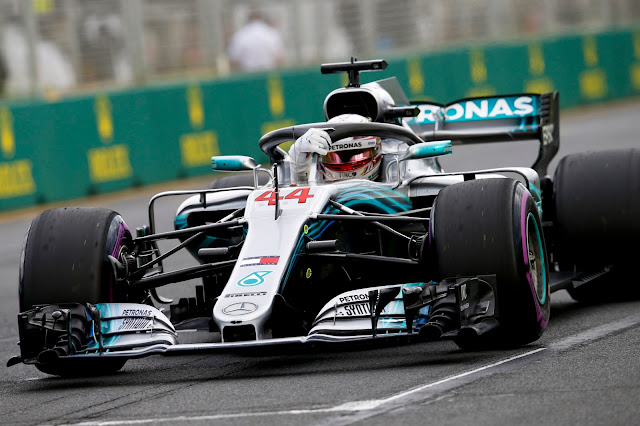 As the start of the first qualifying session of the year approached, leaden skies reigned over the paddock, dull grey oppressive weather after the unmitigated glories of the previous day. Of course, still quite the improvement from the utter bucketing that assaulted FP3 and saw only about 4 drivers set times on slick tyres.
Ricciardo was top of the charts, with his shellacking for exceeding red flags and resulting 3 grid spot penalty being a hot topic, along with the apparent miss from broadcasting, that the HALO might interfere with the onboard shots. Hard to know how many times they might have to be pointed in the direction of visor cam from Indy before they figure it out, but one hopes sooner rather than later.

Green Light!! With a thoroughly green track it was Hulkenberg first out of the gate, followed by Leclerc, Ericsson and Grosjean to inaugurate the 2018 season. Ferrari joined the party as the clock ticked over the 16 minute mark and the track filled up. Mercedes joined around the 14:30 mark and as the lads from Brackley got their machines up to temp the first times began posting. Sainz was the early leader until the Ferrari's rocked in, Raikkonen leading Vettel with a 1:23.616. Hamilton slotted P2 with his traffic laden effort but Bottas surpassed him and as the field awaited the times from Red Bull, it was Raikkonen, Bottas, Hamilton, Vettel and Sainz at the top.

Ricciardo and Verstappen both improved on the two Mercedes dropping Hamilton to P5 and it was Raikkonen maintaining his iron grip on the field with a crushing 1:23.096, a result of his second bite at the apple.

7 minutes to go and it was Gasly, Stroll, Hartley, Ericsson and Leclerc with it all to do, with Sirotkin in the hot seat. Ericsson rocked it up to P12 as the last 5 minutes rolled off the clock and in all the excitement, Hamilton shook off the rust and took P1 with a 1:22.824.

Ocon meanwhile had dropped to P15 and was on it with 2:30 left and as he hit the line, he improved to P10. His teammate Perez, however, rapidly took his toy away, despite a big lockup. Grosjean rocked it up to P6 and as the last of the time ticked off, it was Sainz to P6 followed by Alonso. Hartley managed to improve to P16, but Gasley had a mistake and it was the ignominy of P20 for him, potentially sparing Ocon from a bit of embarassment as he had dropped to P15 by time Gasly had his faux pas. Done like a dinner then, were Hartley, Ericsson, Leclerc, Sirotkin and Gasly. The rest got down to brass tacks as Q2 loomed large in the team's wing mirrors.

As the lights went green for Q2, it was a big handful of nothing as everyone waited for the other team to go out first and help rubber in the track. Verstappen was first off the blocks on the Supers, with Ricciardo following suit. The rest of the field opted for the more traditional strategy, emerging on the Ultras as the track burgeoned with traffic as the clock ticked past the 12 minute mark.

1:22.830 for young Max on his Supers, the first lap in the books and Raikkonen rapidly outdid that, taking P1 away from the Dutchman. Hamilton, then crushed the both of them, rolling up with a 1:22.051 like THAT was no big thing as Hulkenberg entertained the crowd with a massive lockup into T1 and a trip through the gravel.

7:30 to go and it was Hamilton, Raikkonen, Vettel Bottas and Verstappen at the top, with Vandoorne, Grosjean, Perez, Hulkenber and Ocon with it all to do. 5 minutes to go and Alonso reported it was getting dark, suggesting they get on with the program as quickly as possible.

4 minutes left and out they came, Ocon leading the way. Red Bull joined the fray as well, again sporting the Supers and with the rapid track evolution none of the teams felt safe, as even Ferrari and Mercedes joined the party. Grosjean to P7 then K-Mag outdid him. Vandoorne could do no better than P12 and Alonso joined him on the wrong side of the top 10, with a P11. Ocon failed to improve, stuck in P15 and Perez was not much better P13. Sainz rocked it up to P7 and just to make it interesting, Vettel bounced Hamilton from P1 by a tenth. Setting up by the barbie were Alonso, Vandoorne, Perez, Stroll and Ocon while the rest turned it around to tilt for all the glory. 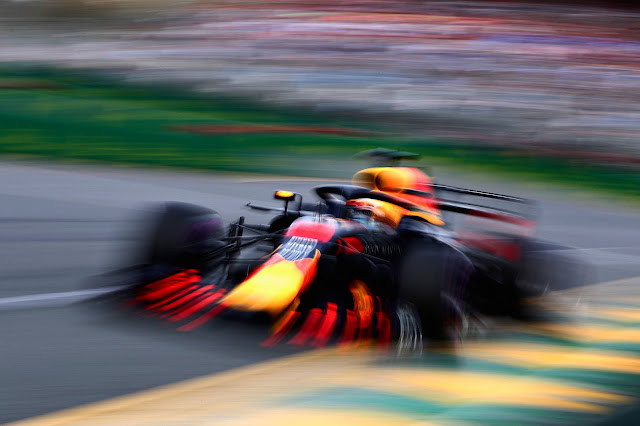 Hamilton was first out in Q3, wasting little time, followed by Bottas. Ferrari were first to give chase, 30 seconds back and lazily trailed by Ricciardo. Verstappen finished the 2x2 as Hamilton rocked up to his first hot lap. Bottas, trailing behind was a bit wide in T2 and touched the grass. When he regained the track the rear broke loose and it was across the track into the wall, bringing out the red flags at 9:47 and a head-desk from Toto Wolff.

While @LewisHamilton stormed to pole in Melbourne, things didn't quite go to plan for his @MercedesAMGF1 teammate... 🙈 💥#AusGP #F1 pic.twitter.com/7V8jZapP6b

The lateral impact made qute a mess of the right side of his car, and the possibility of a penalty palooza for having to replace parts loomed as a very real possibility. 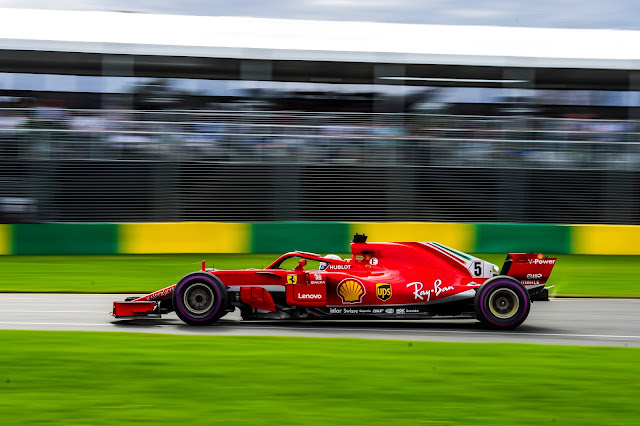 Ricciardo was first out when the pits reopened, then Hamilton and Verstappen. Again, Raikkonen and Vettel trailed out about 20 seconds later as the rest of the top 10 held their fire. Hamilton wove his way around the Red Bulls and once again, was the first to rock off on his hot lap. Neither Red Bull could touch his S1 time, but Vettel could and did. 1:22.051 for Hamilton but Sebastian laid down a purple S2 and was on a proper challenge. He gave it all up in S3, going 0.034 seconds slower. Verstappen, too,  was not far off, 0.061 seconds off Lewis' time.

As the track cleared and the sharp end reset for their last runs at glory, the midfield emerged for their turn. Grosjean was in quite the hurry, passing Hulkenberg, who was released directly into his path, in the pitlane. No harm no foul, apparently, as they carried on without incident on their outlaps.
Grosjean to P7, followed by Hulkenberg and Sainz, with Magnussen being best of the rest and as the midfield sorted themselves, Hamilton was on a thoroughly unhinged lap, 0.4 seconds up just in S1. Neither Ferrari could touch that and Lewis continued to wring the neck of the track getting round S2 in just about 22 seconds flat. By time he cracked the line he was nearly 0.8s up on his first effort with a 1:21.164, the better part of a full second up on his pole lap from the previous year. Raikkonen was the closest to him, 0.6 seconds slower, then Vettel and Verstappen rounding out the top 5. Hamilton dropped that it wasn't the modes, it was the tyres.

Tomorrow's race promises some entertaining battles, not least of which will be the out of place Ricciardo and Bottas trying to slice through the field like hot butter. The battle between HAAS and Renault looks to be epic, and as Alonso said, a bit of rain wouldn't be amiss, at least if you're Macca and hoping to nail some points. With Verstappen on Supers for the start of the race, the sharp end won't be lacking for strategic variety and if Mercedes lunch the Ultras early on, then it could be quite the epic battle.