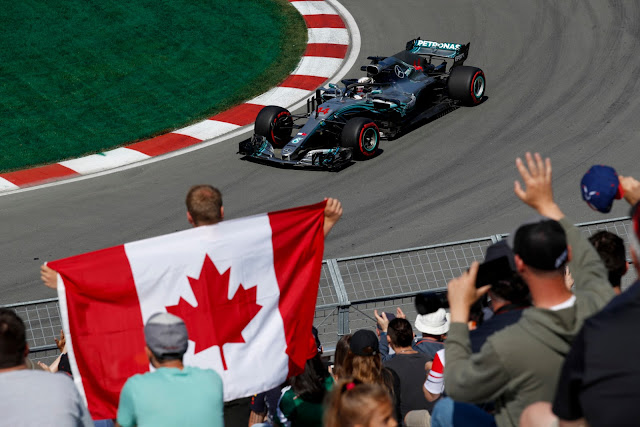 Montreal has long been a Hamilton track, he has won 6 times, crushing the opposition mercilessly relative to current drivers. But Qualifying is all about who's fastest over a single lap, not a race distance and if you bloodlessly evaluate the evidence from the Free Practices (minus one very squished groundhog) Hamilton would be odds on favourite to win the race, but no one should be betting on him for pole, as both Vettel and Verstappen (assuming he doesn't bin it before his first run in Q3), should have the means to beat him...

Circuit Gilles Villenueve sparkled in the dense sunshine, the weather every bit the gloriousness one expects Montreal to deliver this time of year. Mercedes on the Ultrasofts looked positively terrifying but having brought just enough Hypersofts for qualifying, it's clear that their focus is more on race pace as Canada has a relatively low win percentage from pole compared to, I don't know, let's say Monaco for example. So they most certainly will try to make Q3 on the Ultra's as opposed to the Hypers, with the only question being will Ferrari and Red Bull choose to follow suit. Still, the lack of running on Hypers looks to have penalised them relative to both Ferrari and Red Bull, and crucially there was rather a lot of work being done to the front end of Hamilton's car just before he set his fastest times. HE was dead quickest in S1, just missed in S2 and was well off in S3, but he had also done an aborted lap that saw him bail at the end of S1 so he might have just enough in hand to pull it off. Should be interesting.

An oil spill at T7 will also complicate Q1, as it had been cleared but the drivers were advised with 10 minutes to go that the track would be "dusty". Another unfortunate event is the lack of running Ricciardo had, after he melted his MGU-K in Monaco. The unit was repaired, however, it seems that his pace with the repaired engine was not evident in any of the practices, though one could think it likely that they will stress his PU as little as possible. In any event, he was unusually off the pace, as was Bottas for Mercedes, who improved the least amongst all the sharp end when he strapped on the softest of the tyres.

Force India seem to be having a it of a resurgence, as they made the most of their updates and boardroom politics aside, seemed to be ticking over quite nicely now they have sorted the issues they had at the start of the season. Renault were not far off and yet again, Gasly and the Toro Rosso turned up in the top 10 and the end of FP3, where one might least expect them.


Green Light!!  Goodness, RoGro's engine let go in magnificent fashion with just 20 seconds gone from the 18 minutes of the first session. Meanwhile, Leclerc, Magnussen, Sirotkin Ericsson all carried on on their outlaps. Vettel and Raikkonen were out and early days it was Sirotkin on top till Vettel dethroned him with a stout 1:12.11.

11 Minutes to go and Mercedes were out and about, with Bottas being first to set a time for the team. Ricciardo was leading the way for RBR and got himself more than a bit out of shape with his first effort, dodging traffic for added entertainment and going P4 as Vettel chunked another 0.25 seconds off his time, rocking a 1:11.725.

8 minutes to go and Ericsson just about took out Verstappen as he visited the wall of champions with his Rght Front suspension. Hamilton, with his first go had himself a massive bit of oversteer and was forced to roll out and reset. Bottas had gone P3 behind Raikkonen and Ricciardo slotted in behind him. Lewis chucked it in again and was able to make P4 as his teammate had a second go and was up to P3.

Verstappen, looking amazingly scrappy took it across the line P4 and with 3 minutes left, it was time for those at the back to start sweating. Kmag, Strol, Sirotkin, Ericsson and of course the non-participating Grosjean were on the outside looking in, as Hamilton started setting purple sectors with less than 2 minutes to go. Flat spot for Stroll took him out, and it was McLaren under the gun as Alonso was P16 on his outlap and Vandoorne had just kicked it off for his final go. Leclerc and Gasly were just ahead of him as the checquers flew.

Leclerc jumped to P12, Gasly hit the pits and was immediately excommunicated as Alonso brought it up to P14, which dumped the Toro Rosso out. Lot of pace in the chassis left with Hartley going P10, but perhaps Gasly not going to the new spec PU had caught him out.

With the dust of T7 settled, it was Gasly, Stroll, Sirotkin, Ericsson and Grosjean (curse of the groundhog?) off in search of poutine with the rest turning it around for Q2.

Kmag, Raikkonen and Vettel kicked off the fun for Q2, wasting little time. Mercedes followed them out and both the Ferrari and Mercedes were sporting Ultras rather than the quickest Hypers, to the surprise of almost no one.

13 minutes to go and they were on it, Raikkonen, Vettel, then Hamilton trading purples as they smashed around the circuit in order. Vettel topped Raikkonen and it was just the question of S3 as Hamilton flashed across the line, a lockup at the hairpin dooming him to P3. That was rapidly converted to a P4 as his teammate, who had been mostly nowhere, jumped up to the top with a 1:11.514. Unlike the others at the sharp end, Red Bull chose to rock out with the Hypers and with just under 10 minutes left, they cranked it up for their hot laps. Personal bests and not purple sectors, a trend that carried on throughout the lap, but divergent results, with Ricciardo going P6 whilst Verstappen was up to P1, eclipsing Vettel with a 1:11.472, just about matching his P3 time.

With 6 minutes left, Magnussen, Hartley, Vandoorne, Alonso and Leclerc had it all to do whilst Hulkenberg sat rather uncomfortably on the bubble. Given the damage he did with his lockup, it was looking likely that Hamilton might yet set another time. But no, the strategy was actually to go around on the Hypers, use them if needed or bail to the pits, as Mercedes headed back out to the track.

3 minutes to go and Ferrari decided that WAS a good idea and followed Mercedes out as Leclerc took advantage of a fairly empty track to improve to P13. Alonso was the head of the queue rolling down the back straight as the clock ticked down toward a minute. Personal bests for Alonso in the first 2 sectors as the drivers backing up for their laps interfered rather seriously with Vettel's attempt at a lap.

Alonso, up to P14, Hartley P12 leaving Magnussen the only one with a shot, but he fell short and it ended the way it started, save for Ricciardo, who rocked up to P1, a rather miraculous 0.038 seconds faster than Verstappen. Magnussen, Hartley, Leclerc, Alonso and Vandorne retired for some Caesars while the ultimate glories of Q3 beckoned for the rest.

Q3 kicked off with Hamilton leading the way, trailed by Bottas. Raikkonen and Hulkenberg were out next and as the early starters rolled down the back straight, Sainz and Vettel rocked out of the pits. Hamilton set early purples, but they were eclipsed by Bottas, sector by sector and it was a 1:11.227 for him but Bottas took him to the cleaners, with a 1:10.857.

Raikkonen split the Mercedes as Vettel chucked up purple after purple and it was P1 and a 1:10.776 as the Red Bull finished up their out laps. Again, no purples but solid green for both Ricciardo and Verstappen, and it was 1:11.281 and P6 for Ricky Danny, and P4 with a 1:10.904 for Max, ahead of Hamilton.  Hulkenberg bested Sainz and neither Force India chose to set a time as they turned it around for the last tilt at the palmares.

Perez, Ocon, Sainz Hulkenberg were out with just over 2 minutes left in the session for their personal struggle. Then Raikkonen, Hamilton, Bottas, Vettel Ricciardo and finally Verstappen rolled out line astern to have their say.

Perez and Ocon were halfway through their laps, setting personal bests and then Raikkonen kicked it off and immediately went wide at T2 chucking it out the window before he even got started as the sharp end got under way. For a moment, it looked like the Force India drivers might even catch up the sharp end finishing their outlap, but that's what you get for taking the app GPS too seriously. Ocon outpointed his teammate with a mighty S3, taking enough advantage of the brute force of his Mercedes' PU to be able to split the Renault's as well, who decidely had the advantage in S2. Hulkenberg was just that bit quicker than Sainz in the last sector, though, and managed to maintain his place as best of the rest, whilst Sainz slipped behind the fast Frenchman of Force India. Perez had a dismal final sector, and wound up nearly 0.5 seconds off the back of Sainz.

Hamilton was all over it after Kimi mucked it up, ahead of Vettel early on, but a lockup into T10 cost him and it was P3 and a consistent inability to get round S3  as Vettel brought it home with a 1:10.764. Verstappen meanwhile turned S1 purple and was stealing focus like mad by not crashing things, while Bottas, rocked it across the line in P2, mistake free and in a most unassuming way. Verstappen kept on it, thrashing the car through the lap, but the long back straight did him no favours. Despite this, he was STILL able to slot it into P3, ahead of Hamilton, complicating James Vowell's night considerably.

Tomorrow's race is now full of all kinds of interesting, Verstappen P3 combined with the fantastically crashtastic T1-T2 complex should yield all sorts of excitement. With passing a real possibility there should be plenty of action throughout the field, especially from RoGro and Gasly near the back with reasonable pace to deploy. Mercedes have been weak in traffic, and should Lewis get stuck behind Verstappen it will go very bad for him quickly. Still, with DRS and despite a non-updated PU, the Bulls look vulnerable down the long straights. Less so will be his teammate and the curiousity of how Mercedes will handle that is to be much anticipated (plan B, Valterri?), should Bottas prove unable to get round Vettel. Of course, said crashtastic start could easily upset the apple cart but at the moment, Vettel and Ferrari look once again like they have the package to beat and the real mysteries, and heart of the competition lay in the midfield this round.