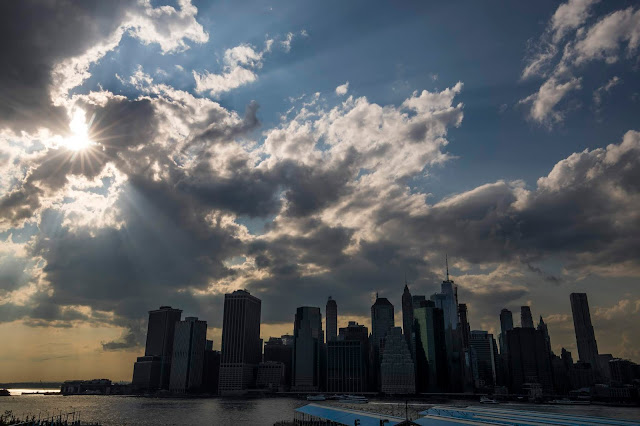 Group Qualifying for the first race of the NYC ePrix was, if nothing else, not the least bit short of drama. As has been the case recently, the groups have been organized by championship order with group 1 being those at the top. Group 1 also traditionally has been the worst group to qualify in and at yesterday's presser Vergne swore that he would not be the first one out if he were in group 1. In fact, he was last and it appeared at first that his gambit would pay off as he hit the line with just a second to spare on the clock, clearly quickest in group 1 going P1 with a 1:13.89 with Buemi, his nearest competitor, more than 2 tenths back.

The news was worse for Sam Bird and Virgin, as the best he could do in the increasing heat was a 1:14.484 nearly 0.6 seconds down on his rival and only good for a dismal P14 once all the times were in. As bad as it was for Bird, though, the news for NIO was worse as their driver, Oliver Turvey, had sustained a suspected fracture to his wrist with his earlier shunt in FP2. As a result, not only was he out of qualifying but the team was sent scrambling for a solution that would allow them to participate in tomorrow's race. Barring the seemingly unlikely event of him being cleared to race this afternoon, the field was already down to just 19 cars.

With Turvey missing and just 4 cars in the second group things were a bit less hectic for group 2. Just like Vergne in group 1, Lotterer looked dominant with a crushing 1:13.927, despite a massive lock up on his fast lap. With Techeetah looking untoucheable, Mitch Evans had a squirelly looking run, the car unstable under heavy braking while Daniel Abt, looking well under control, slotted in just ahead of the Jaguar driver. That bumped Bird down to P8, with just Rosenqvist, who had a dreadfully slow lap, below him as group 3 got ready to head out on track.

While they were waiting, the stewards announced that Vergne was under investigation for maximum power use during his qualifying laps. D'Ambrosio rocked it up to P5 with his go, with Buemi, yet to have had a pole this year, was just off Jerome's time. Heidfeld fared a bit better than Rosenqvist, going P9 with his turn and da Costa managed to rock up to P11 with just the last group to qualify. And then it was announced that Vergne's times had been cancelled. Which, to put it mildly, did cause a bit of a stir. It also turned out that Lotterer was under investigation and his times, too, were rapidly stricken from the charts.

With that bit of drama, group 4 was off and it was Nico Prost, in his penultimate race, turning in quite the nice effort for Renault, just 0.02 seconds off of Buemi. Lopez then put in a second strong drive for Dragon, though admittedly not quite on par with his teammate, D'Ambrosio. At the other end of the spectrum, Sarrazin stuck it in the wall in turn 11, though he was able to get the car moving and not spoil the runs behind him. With Techeetah excluded, the Super pole shootout was down to Daniel Abt, Sebastian Buemi, Jerome D'Ambrosio Mitch Evans and Nico Prost.

With just an outlap and single run, and no chance to prepare the tyres, Super Pole times often wind up being slower than group qualifying and today was no exception.

Prost was up first and made a clean, but unremarkeable run, looking somewhat unstable under braking and putting in a 1:14.921. Next came Buemi, and the Swiss driver just did what he does best, clean, precise and well under control. The result of his effort? A remarkably quick 1:13.911.

D'Ambrosio's lap looked a polar opposite, messy in every way and a very unfortunate 1:15.391 looked to have him solidly in 5th place. Mitch Evan's effort, though much, much quicker still had an element of on the edge to it that Buemi didn't and it showed in his second sector especially, where he lost nearly 0.3 seconds to Sebastian. Still 1:14.465 was a good result and it moved him ahead of Prost and onto the dirty side of the track for the moment.

With that all eyes were on Daniel Abt, with Audi reputedly the fastest package on the grid and his string of excellent results this season pole looked to be on the line, at least until he had a massive lock up into turn 6, which ended his challenge and left him more than 2.5 seconds slower than Buemi, who, rather remarkably, claimed his very first pole of the season.


After the session was done, team principal Mark Preston explained that a software update, done for reliability purposes, had been behind the technical infringements of both his drivers. The update has been rolled back and wasn't detected in practice because neither driver got a clean qualifying simulation in FP2. Regardless of the reason, the practical result is this afternoon's race will feature both championship contenders starting at the back and out of the points, with the headstart to Sam Bird who currently and desperately needs too make up ground on Vergne. Which, if you were writing a script, would be just the cliffhanger you want.
Tagged
Newer Post Older Post