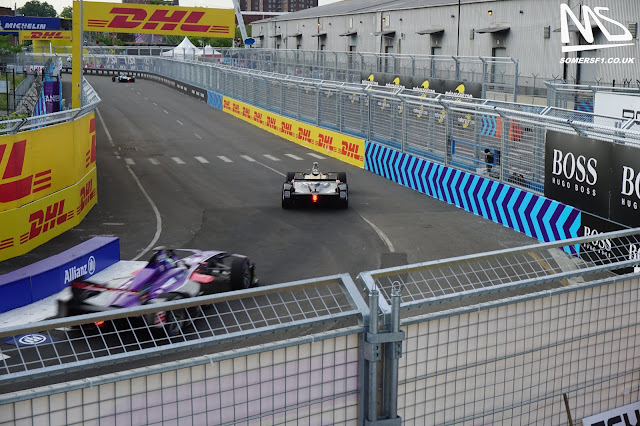 Where P1 was just a ball of excitement, P2 wound up being a head scratcher, with the championship leading Techeetah setting a decidedly way below average P11 (Lotterer) and P14 (Vergne) while the precariously placed Mahindra lingered right at the bottom of the timing chart, in a session that generally features most teams running qualifying simulations at full power, usually near the beginning and end of the practice.

Of course, there was still plenty of action on track, and the marshals were kept busy by a variety of spins and wall taps. Among those bringing out the yellows were Daniel Abt with a tidy little spin, his teammate Lucas DiGrassi who also got a bit frisky with the TecPro, bent his suspension and had to crab it round to the pitlane, and Andre Lotterer who completely baked the braking for turn 2 and gently parked it right up against the barriers with no damage done.

Even Sam Bird, who wound up P3 when the dust had settled (OK, not gonna lie, dust probably won't have settled by time this is published, it's terrifyingly dirty out there, like serious old school Times Square dirty) wound up having quite the lurid spin near the end of the session. The winner of the damage competition this round though was Stephane Sarrazin, who utterly destroyed his right rear suspension when he put it in the wall out of turn 8.

Nelson Piquet Jr. intriguingly managed to get himself investigated for some sort of practice start infraction but it was his teammate, Mitch Evans, who went fastest of all to top the timing sheets just as things wound to a close. A surpisingly elegant lap from Jerome D'Ambrosio put him P2 followed by Bird, Lopez and Buemi. But as in FP1, the dust on the track was the real story, even though some kind of a racing line started to appear by the end of practice, it still appeared as though Michelin perhaps should've brought some rally cross tyres to deal with local conditions.

Down the long back straight into the turn 11-12 complex the cars churn up a massive haze, clearly visible on telly. This looks to be exacerbating the already challenging surface conditions of the track and may well have caught out some of the teams we expected to see at the top going into qualifying.