Being a native New Yorker it made perfect sense to get our very own Matt 'Trumpets' Ragsdale down to his local E-Prix, complete with a full media pass. As such, we'll have plenty of content over the coming days and some stuff that we'll hide in a locker somewhere, ready to be deployed when the mood suits. 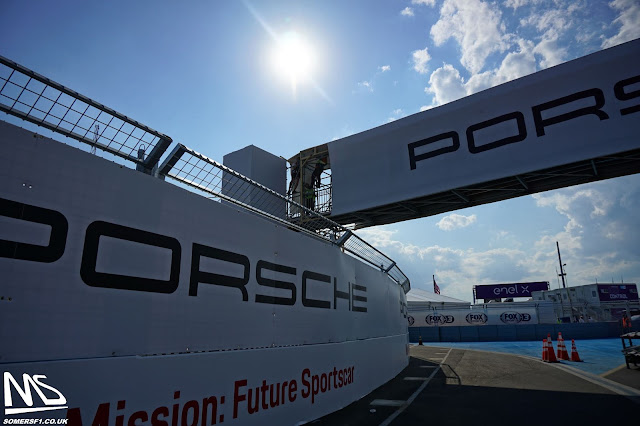 The day was hot, sun blazing down on the pitlane as the teams got to the serious work of setting up the cars while the drivers, when they could be spotted, alternately joked about and engaged in serious looking discussion with a panoply of media types, mostly with expensive looking video rigs. There was also the inevitable (and entertaining) driver car swap practice, last vestige of the old batteries and cars that were going to be headed the way of the dinosaurs for season 5. 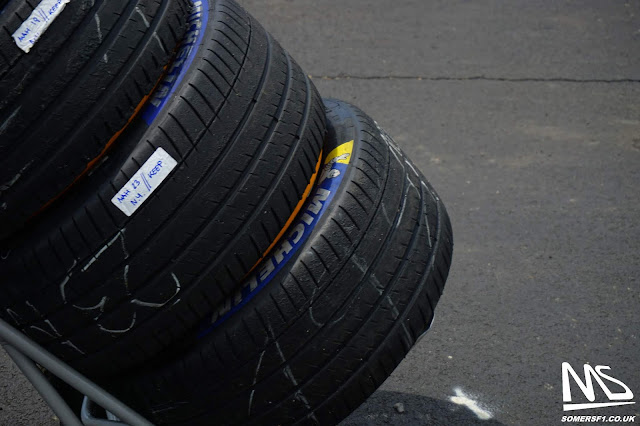 Peter, from Dragon Racing, was kind enough to share that in the event everything went well, usually two or three times was the magic number for both driver and crew but, in the event things went less well, they'd press on until everyone was happy. He also ventured a detailed explanation of how to properly set tyre pressures, which involved using an internet connected device to accurately measure barometric pressure, while making measurements of the tyre pressure and tyre temperature, along with a fixed spot on the floor (usually in the sun) and ambient temperature in the garage. As each measurement gets made, the barometric pressure gets registered simultaneously and it all gets sent back to the Home Office, where an engineer will put all the puzzle pieces together to make exact recommendations for qualifying and the race. 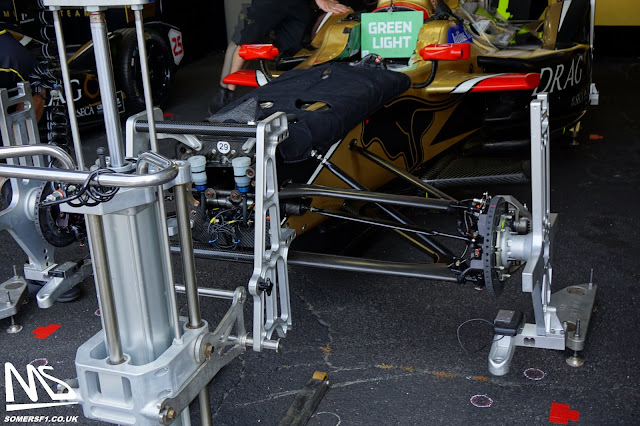 Another detail that demanded closer attention was the fact that the brake discs on Formula E cars, look fairly puny in comparison to Formula 1 cars, with less visible cooling and no hollow axles. This is primarily due to the use of regeneration as a component of the braking systems, along with the lower speeds overall. 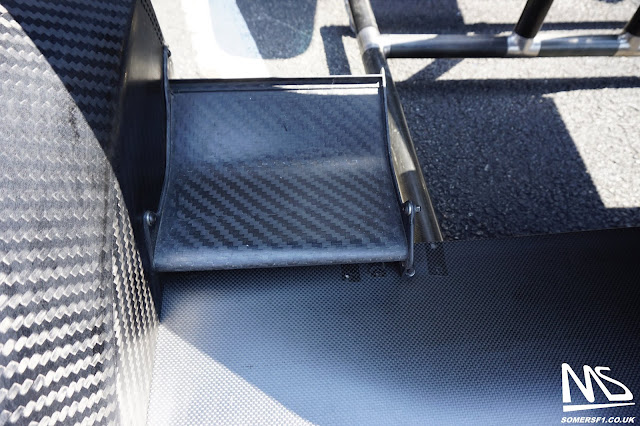 Even though Formula E is primarily a spec series, in terms of chassis, and one that uses minimum aerodynamics, team principal Mark Preston confirmed that there was indeed some adjustment available on the front wings, for the team to use in help balancing the car at different circuits. Given a minimum weight of 880 kg for the car and 320 kg for the RESS (rechargeable energy store system) anything to help get weight over the the front tyres will be worth it.

Of equal interest is the remarkably diverse surface of the track itself. Ignoring things like drain covers for the moment, there were three distinctly different surfaces that the drivers, and teams, will have to contend with. Fairly new asphalt, laid last year, older asphalt with more aggregate visible and then a stretch of cracked, very aged asphalt, each offering varying levels of grip for the 18" Michelins. The surface is also fairly bumpy and uneven and as an added bonus, features an uphill launching pad into T14 which not only leads onto the finishing straight, but also sports a short length of concrete across the width of the roadway. To add a bit of variety, there is also the odd patch of asphalt over and around various electrics and drain covers embedded in the roadway. 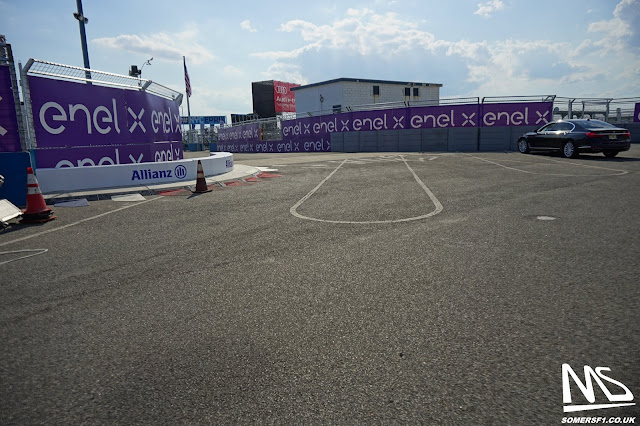 But the biggest change from last year is very clearly the transformation of the hairpin just after the start (which is not the finish line) into a 4 turn complex. Although work wasn't entirely finished on the complex, the pictures clearly give a good indication of the new challenge facing the drivers this year. The intent of the changes was to stop a first turn (really Turn 6) massacre which was generally thought to be encouraged by the nature of last year's hairpin.

Although Virgin think that the change might make their chase of the championship a bit harder, with Jean Eric Vergne of Techeetah needing to outscore Sam Bird by just 7 points to clinch the championship in Saturday's race, all in all it is representative of the race series that they would seek to bring racing to the fore, rather than random chance
Tagged
Newer Post Older Post