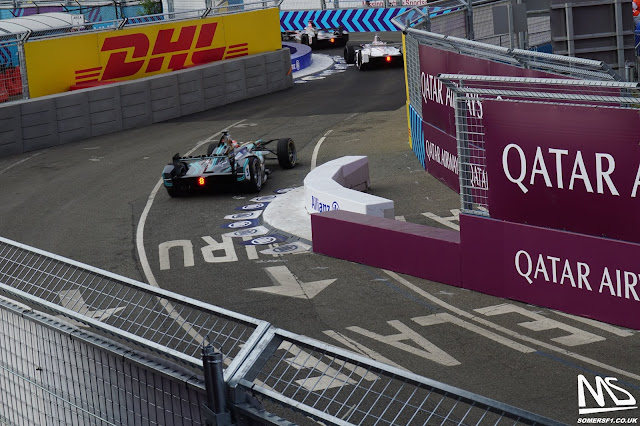 Matt 'Trumpets' Ragsdale dissects the action in Free Practice One, as he goes track side to get all the best views and sense of the speed of these machines.

Practice 1, in typical Formula E fashion, was anything but a sleepy session despite the hour. Two red flags and two cars into the wall in various fashions during the somewhat abbreviated action, which was extended 10 minutes due to the lengthy nature of the 2nd red flag, while track conditions were investigated after Jose Maria Lopez trashed his right rear suspension after riding the kerbs out of turn 12. Fortunately for him, there is no shortage of garages in the area.

Early running saw the Mahindra's and Audi's trading fast times, but that fun was quickly ended when Heidfeld just nosed it into the wall, also in turn 12. This brought out a short red flag and as running resumed it was Jaguar that claimed top spot, with Nelson Piquet Jr. taking the honours until Pechito parked it in the pitlane with the wheel barely attached to the axle after getting perhaps a bit too aggressive with the kerbs.
Nearly 20 minutes later and with an extra 10 minutes to play with, it was Audi who finally tipped their hand with Di Grassi going 1:13.566, shadowed by Buemi just 0.35 seconds back. A weird echo of the title fight that might have been, save the difficulties both teams encountered this season. As to the actual championship contenders, Vergne was consistently quicker than Bird throughout the session, but by the time Maro Engel tasted the TecPro at the exit of turn 2, the gap was just about half a tenth between them.

With Vergne needing to outscore Bird by 7 points to clinch the title in today's race, it was a much needed reassurance to team Virgin, whose heavier car was put at more of a disadvantage by the reconfigured track. Also worth watching closely is the fight for 4th in the Constructors, with Mahindra clinging to an 11 point lead over Jaguar and 17 points over Renault. FP1 times seemed to favor Jaguar with Evans significantly faster than the other 3 drivers, despite Rosenqvists belief that the setup issues Mahindra had been struggling with have been solved by the team.
Tagged
Newer Post Older Post