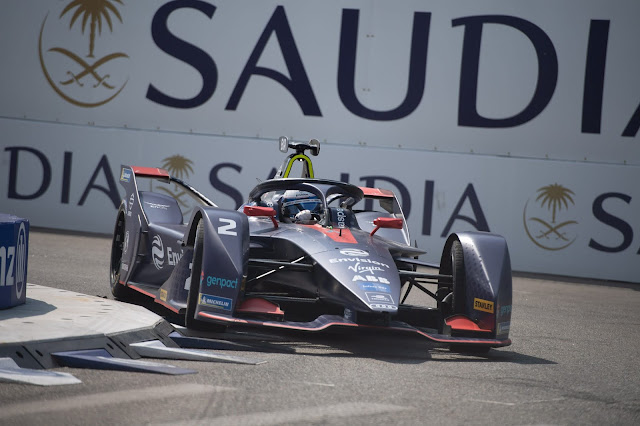 Free Practice 2: Virgin out early with Nisssan, Techeetah and Audi. The track filled rapidly and on the long straights clouds of dust plumed into the air as drivers delicately felt out the surface. After the dust settled, quite literally, it was Vergne with the early fast time, a 1:11.23 and 0.37 seconds up on Massa.

However, as with all good things they generally don't last and with just over 25 minutes left in the session D'Ambrosio went to the top briefly, before being surpassed by Lucas Di Grassi. Traffic was brutal on the narrow, tight circuit and despite the running, still the offline runs kicked up all sorts of debris.

22 minutes to go and it was Da Costa's turn, in the BMW Andretti to set the fastest lap, now down into the 1:10s as Vergne got on with some race simulation and let him by into T1. By then, though, drivers were rolling into the pits to make minor alterations and cool things down before heading back out. 18 minutes to go and Da Costa Di Grassi D'Ambrosio Vergne and Evans were the top 5 and the bottom 5 were Gunther, Lopez, Dillmann, Mortara and Abt. Only momentarily as taking advantage of a fairly empty track he rocked his way up to P2 leaving Mortara at the bottom of the pile.

Sam Bird on a hotlap then had a neat brush of the wall, but not costing him much on his way to P3 with a 1:11:048. Buemi was next up and displaced Bird handily as Evans was on a real scorcher born out by his eeking out Da Costa for P1 by less than a tenth. As the session progressed it became clear that the braking zone into T11 was an excellent place to watch the cars, with the bumps unsettling the rear and most drivers squirreling into the turn. Da Costa had a proper lock up and hammered the kerbs hard on his trip through and then, with just 2 minutes left, Vergne missed it entirely and had to reverse out of the corner, without tagging the wall happily enough for his mechanics.

As the checquers fell, it was Da Costa, Buemi and Sims at the top with Rowland on a hotlap, and to the top he went, with a 1:09:695. At the bottom were Lotterer, whose lap was spoiled by traffic, Vandoorne and Lynn as the teams got it together and began to pore over the last data they'd get before the qualifying session began... though with Techeetah having purpled S1, Nissan S2 and BMW S3 the race looked very much to be on.

If you want to relive the action of FP2 then look no further...