Da Costa was first to blink, followed by Evans, with just under 3 minutes to go the leading driver thought to be at a particular disadvantage. Working their way to last, was Techeetah as the prep laps were underway. Evans was 2nd on the road, followed by Di Grassi.

But as things go, Techeetah was immediately on their hotlap and it remained to be seen if that tactic was going to unsettle their opponents. The increase in track temps had significantly reduced the available grip and on their way round, at times it looked more as if Vergne and Lotterer were skating on ice.

No luck for Di Grassi, who was not having the best of rounds, but Da Costa was on it and as he cracked the line it was P1 with a 1:10:845. That moved Vergne to P2, followed by Evans and then Di Grassi, P4 and Lotterer the lanterne rouge of the first group.

Buemi, D'Ambrosio and Abt led the way for group 2 with much less drama than the first group. Early days Frijn led the way, with all 5 drivers being faster than Da Costa in the first group. Headed into the hairpin D'Ambrosio had a big slide and wound up pointing the wrong way on his track. As the came across the line it was Buemi taking top honours, followed by Bird and Abt. Frijns lost time in the final sector and wound up coming behind Da Costa and then D'Ambrosio looked doomed to start last, with a 1:18.262.

As the drivers cycled through the TV interviews, the dirtiness of the track was perhaps the hottest topic of all.

Rowland and Sims were first off the line for Group 3, the rest choosing to make just a single lap to set their time. Massa, Wehrlein and Vandoorne hit the line with just a minute and a half left on the clock and it was time to get busy. Vandoorne was first and with a big chunk of oversteer coming out of T5 he was already behind. Rowland was well on it though as was Sims behind. P11 though, so a mistake in S2 cost him. Wehrlein kept it in shape and went P3 with Mortara going P12 and Massa slowest of the lot, P15 with just D'Ambrosio behind. With one group to go it was Buemi, Bird, Wehrlein, Sims, Abt and Da Costa doing the watchful waiting bit.

Lopez was out first and alone north of 5 minutes left when he hit the circuit. 3 minutes to go and Lynn, Turvey and Gunther had tossed their hats into the ring and as the needle ticked down to the 2 minute mark Dillmann joined the fun. 30 seconds later and Paffett was out the door. P6 for Lopez and say goodbye to Da Costa then Dillmann came a respectable P10 as Alex Lynn was suddenly setting purple sectors. P13 for Paffet and Turvey went P16. After losing time in the middle sector, Lynn kept his head in it and as he hit the line he went P5, pushing Lopez out. So Buemi, Bird, Wehrlein, Sims, Lynn and Abt got themselves ready for the ultimate glories of superpole as the rest began plotting their race strategies.

Unlike the other sessions, Super Pole runs slowest to fastest thus Daniel Abt was first to have a go. He lined up at the pit exit and as the light went green he was off. Not too fast, he dawdled his way through the tricky T11 and as he lined up for the start finish he was on full power and off. Purpled the first sector neat through the hairpin, losing 4 tenths through the middle sector though and it was a 1:10.894 which would have put him tenth against the previous times.

Lynn was next to go and he purpled S1 but unlike Abt he carried on into S2 and as he neatly rounded T14 it was to the top for him, with a 1:10.696. On replay, it was clear to see him bouncing all the way through T13.

Sims was next to light it up and it wasn't a good start for him, down 4 tenths. He managed a decent comeback, fastest in the last 2 sectors but the mistake out of T3 cost him, and it was P3 by 0.005 seconds with Wehrlein next up. He was much neater in the first sector, but still more than a tenth off. He made up for it in S2 and kept pushing, tkaing top honors in S3 as well as the top spot for the moment, as Bird was now off for his shot at pole.

Into the dust on the way into T2 and fighting the car all the way through the first sector it was a torrid run for Bird. He lost another tenth in S2, with a lockup and only a purple S3 to salve his pride, precious little given he wound up nearly half a second back of Sims.

Buemi was the last to go, and he a neat and tidy, as one would expect from a Swiss driver. Up a tenth through S1. Purple S2 and then with only Bird faster in S3 he was up and into pole position. Wehrlein, Lynn, Abt, Sims and Bird rounded out the top 6 positions.

Also worth considering is the effect the track temperature and surface was having on the cars, with several losing it in the dust as they got offline and others locking up severely as they bounced into a braking zone. The race isn't run on open city streets, it's a storage area and lot for cruise ships that is directly on the water so dirt accumulates and without regular traffic to clear it, simply layers on the ashphalt. Even with trucks cleaning the track regularly, going the slightest bit offline will be potentially punishing, particularly as the hot tyres pick up grit on their surface causing the drivers to lose even more tractions till they can clean them. In other words, it should be an exciting show down... 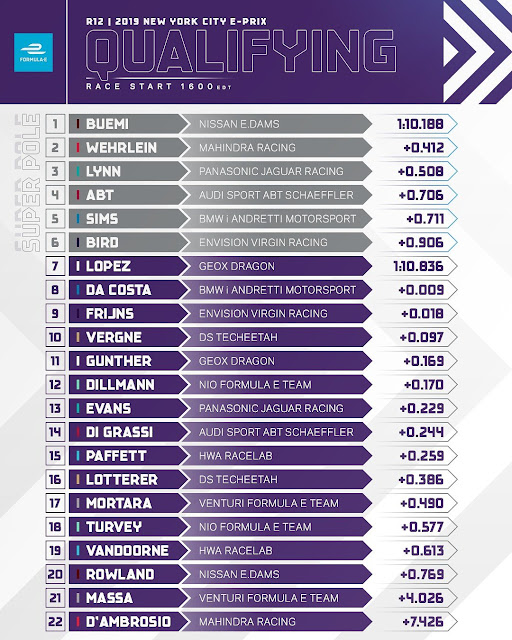