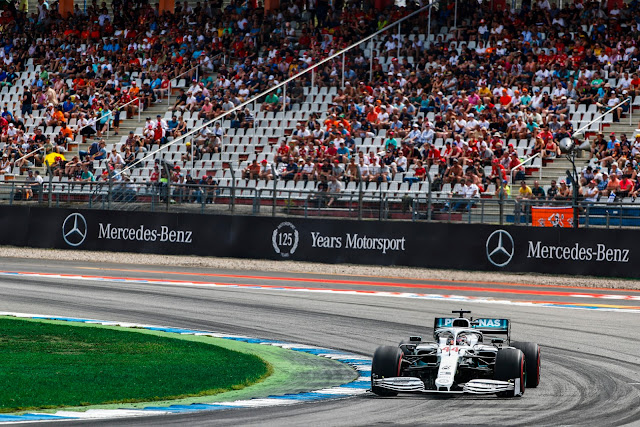 After the the inferno of Friday's Free Practice sessions, Saturday seemed a relief, with temperatures below 30°C but as qualifying approached the track was climbing back up towards the uncomfortable phase for the teams. After a day of watching, the FIA had also decided that going off the blue and white kerbs in T1 and T17 would be met with deleted times during the session and this led to a massacre late in FP3, with many of the top teams (and midfielders as well) just missing and losing times.

IF that doesn't add enough spice for you, consider as well that with 10 minutes left in FP3 Mercedes was busy changing over from their brand new, extra cooling enhanced bodywork to their slimmer, more efficient package, though it was still not enough to get either driver within half a second of the Ferrari leading the way. Toss in a Verstappen that split Vettel and Leclerc at the top of the timing sheets and you have a recipe for a rather exciting qualifying.

In the midfield, the main attraction was Kevin Magnussen, going P5 in FP3 after languishing the day before, versus his teammate wearing the Melbourne spec which they started the year with and which was fairly dominant the day before.

Green Light!! Kubica was out first, followed by Russell as they sought to get some good numbers on their new bits, with which they were quite pleased, bringing them several tenths according to all accounts. Next up to test their upgrades, was Racing Point in the form of Stroll with what was generally described as basically a new car that had been making both drivers happy thus far this weekend.

15 minutes to go and out came Macca, Toro Rosso and Alfa as Stroll was on his hot lap and for a moment at least, he was at the top of the sheets, going 1:13.393. The Mclaren's were next up, Norris leading Sainz and it was Norris slotting just behind Stroll and then Sainz, to the top by about 0.05 seconds.

Raikkonen then took top honours and Kvyat and Giovinazzi, slotted behind Sainz as now the first of the front runners were out to test the water, Ferrari, and REd Bull just cranking up the volume with just under 11 minutes left in the session. Vettel was on the radio complaining of a power loss on his outlap but he carried on.

It was Leclerc, continuing his form from FP3, lighting up the board purple as Vettel was ordered to pit...... 1:12.229 for Charles as Verstappen ran it home 0.364 seconds slower. Gasly was a full second off and slower then Raikkonen, Sainz AND Kvyat.

8 minutes to go and the bodywork was off in Vettel's pits as Bottas had rolled onto the circuit, along with the remainder of the field, Renault and HAAS. Early days it was Ricciardo to P4 and Magnussen to P5, separated by just 0.036 seconds as the Mercedes rocked on.

An ugly effort for Hamilton, P13 but there was traffic and a yellow flag to consider, along with a Red Bull balking him at the last corner. P4 for Bottas then and just bad timing for Hamilton apparently. Worse for Vettel who was out of the car with 5 minutes to go and apparently done for the day.

Giovinazzi, Albon, Kubica, Russel and, of course, Vettel were on the outside and looking in while at the other end of Formula B, it was Raikkonen P4 leading the way. And of course they were all out at the same time, with Grosjean nearly taking out a Williams mechanic dodging Kvyat on his way out of the pitlane such was the crowd. As they got down to it Hamilton elevated himself to P3 and got himself out of the way as the final battle to make the next session got fully underway.

Macca was out first, Sainz in P9 and looking to not get excessed and the traffic was fierce. No improvement for him, Norris being next up, just escaping the drop zone to P15, not really a safe place to be. Giovinazzi was on it but first Raikkonen was up, confirming his P4 for the moment. Giovinazzi then went to P8 puttin Norris out and then Kmag rocked across in P6. Gasly went to P4 and then it was just Albon with the chance to bury his teammate, who had fallen to P15, but nothing doing and that was not a real surprise as he had been thoroughly balked by the unusually slow Norris, who turned up at a particularly unfortunate part of the lap...

Going no further then were Norris, Albon, Russell, Kubica and Vettel and off they went in search of some spaetzle, as the rest turned it around for the furies of Q2...

Q2 kicked off with the big boys, Mercedes the lone Ferrari and Red Bull all running the Medium tyre. It was Leclerc, backing off his first lap as the Mercedes leaving the door open for Hamilton to go to the top, followed by Bottas and then Sainz. But his second effort saw him up to P2, and in he went as Verstappen was now on it. Or at least he was until he lost power on the straight, and then he was called into the pits as it emerged that Vettel had suffered a turbo failure in Q1, sending him out. Kmag rocked into P5, just behind Sainz and followed by Raikkonen, Giovinazzi and Perez. At least till Grosjean outpointed his teammate by 0.02 seconds dropping them all one place and leaving Hulkenberg, Kvyat, Ricciardo, Stroll and Verstappen on the outside looking in.

Gasly had rocked up to P3 on the Soft tyre and with 5 minutes left, they decided to to send Max out as well thus setting up an interesting potential strategy battle for Sunday. It was an oddly slow outlap for the Dutch driver, but he fired it up into the final turns and off he went. AS he was up and on it Kmag, Stroll, Giovinazzi and Sainz were off for there second efforts. Following them were the Renaults led by Hulkenberg and the Alfas, led by Raikkonen. P4 for Verstappen then, and complaints of lag, second race running. Supposedly down to throttle mapping in the last race and no word this time. Also complaining on the radio were Bottas and Hamilton with the team wanting Lewis to be let by, but Bottas not wanting to lose temps on the Medium, as Hamilton was on the Soft....

Kmag had a big lockup and spoiled his effort and it was no improvement for Stroll. P7 for Grosjean and then Hulkenberg ditched Giovinazzi as the Alfa driver was still on it, and Raikkonen dispatched Ricciardo who had just gone P10 before Kimi made him P11. Giovinazzi snatched the last spot from Magnussen and in the coupe de grace, Perez knocked him out of the last transfer spot.

Going no further then were Giovinazzi, Magnussen, Ricciardo, Kvyat and Stroll and off they went to look for some kolsch, whilst the rest turned it around for the savageries of the final qualifying session.

Q3 opened with Mercedes, Bottas leading the way, trailed by Sainz and then a slowly creeping Verstappen, again with their unique tyre preparation. 10 minutes to go and it was playtime, the two trading purple mini sectors and Lewis claiming S1 whilst S2 went the way of Bottas. Not a good look at Ferrari, as Leclerc's car was being frantically worked on whilst the rest were on it. The decider went to Hamilton and it was a 1:11.767 and to the top as Leclerc was out of the car and done for the day, having set no time. Verstappen managed to split the Mercedes and it was a sack of woe for the Scuderia yet again. Grosjean went P5 just ahead of Sainz, and none of the rest had bothered to set a time.

Into the interval went the Racing Point of Perez, alone on the track with 5 minutes left in the session. P6 for Perez then, undisturbed in his efforts as first Raikkonen, and then Grosjean emerged for the final tilt at glory. Hulkenberg was next up and then Hamilton, ahead of Bottas and then Verstappen leading Gasly set themselves up to be last across the line. Not a turbo problem for Leclerc, but it was still going to be P10 for Leclerc, assuming his fuel system issue could be cured without incurring a penalty.

Under a minute to go and Hamilton was off, but along the way it was Raikkonen, up to P5. No improvement for Hamilton, and then Bottas was next up, and he was not able to go faster leaving just Verstappen to have a go. And Max, too, could not dethrone Lewis leaving mainly a chorus of what might have been's from the tifosi as the grid was set for Sunday's race....

As for Formula B, Hulkenberg managed to outpoint Perez for P8 and leaving a nicely mixed grid for the race, along with the inevitable chance of rain. A decent recovery for Gasly after a rocky weekend, his deleted time in Q3 just a tenth off the front row. For Sunday's race, a Soft tyre shod Verstappen at the start amongst the Medium clad Mercedes could lead to some early hi jinks, and the Max v Lewis duel into T1 is a bit of a juicy prospect even without the competing tyre strategies. And if that doesn't get your racing juices flowing, consider the insanely close battle amongst all the Formula B field (0.03 seconds from P11-P13), with HAAS running 2 different spec cars to boot.....
Discuss!!