The Mercedes powered teams have been busy preparing updates for the German GP, with the Mercedes works team, Racing Point and Williams all having a substantial package of new parts fitted to their cars on Friday…
Silver, white, silver arro… - Mercedes 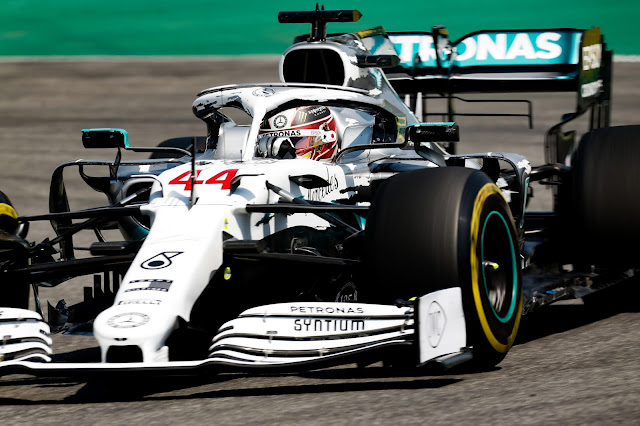 The W10 looks absolutely resplendent for the manufacturers home Grand Prix, as it’s been dressed in a special one-off white peel livery which commemorates their 125th year in motorsport.
Ignore this magicians sleight of hand trick for a minute though and join me as we dissect some of the aerodynamic updates that are also present on the car. 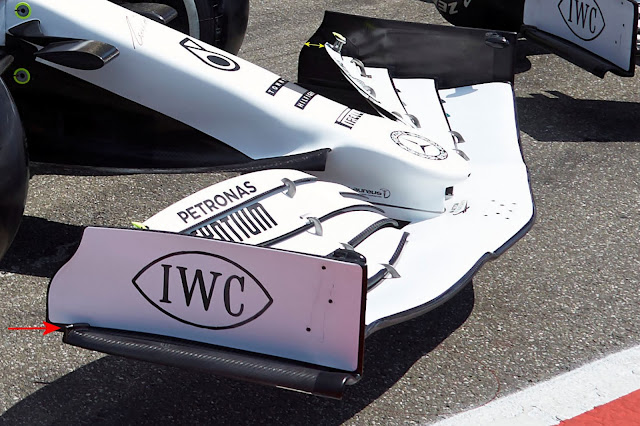 The first piece of detail that requires our attention are some small alterations made to the front wing, as the previous update has been refined further. This includes a small outwash Gurney-style tab on the back of the footplate (red arrow), which will alter the shape, direction and vorticity of the vortex that’s shed from here. Meanwhile, the upper flaps have been backed-off even more than before (yellow arrow), as the team are clearly satisfied with the level of downforce that’s being generated and are prepared to sacrifice some more of the outer real estate in order to generate outwash - flow pushed across and around the face of the tyre to reduce the wake turbulence it creates.
The initial switch to this style of endplate cutout in China was met with an ad-hoc modification, as whilst the team had initially believed they could still run the flap at its full permissible height, the FIA quashed their plan, leaving them to cut down the flaps and cover the remainder of the exposed tip with a temporary nodule. The flaps were subsequently trimmed further but this latest alteration is a much larger step toward the backed-off outer front wing designs seen elsewhere on the grid. 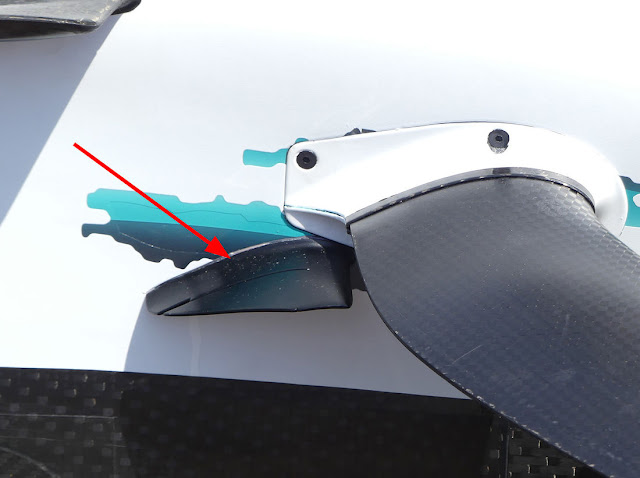 Just behind the upper rear wishbone leg the team have added another small flow diverting winglet, which essentially becomes an extension of the already carefully crafted suspension component (IMAGE: AMuS). 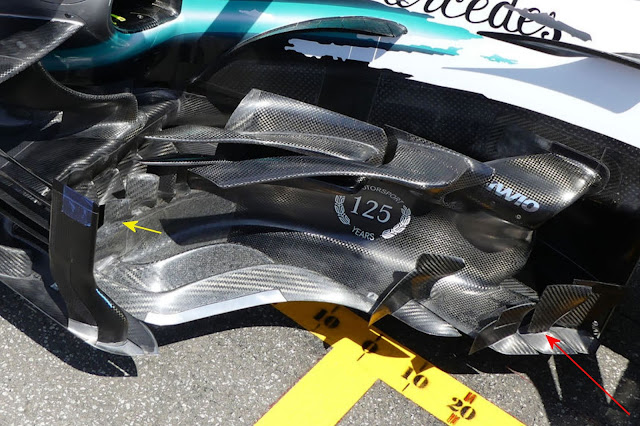 The W10’s bargeboards were also tickled by the bag of update feathers, as the vertical elements stacked on top of the forward footplates (red arrow) and the serrated elements at the rear of the main bargeboard surface have had their geometries altered to suit the change in flow structure they’d receive owing to the changes ahead of them (Picture is for illustrative purposes only and features the older spec - picture AMuS). 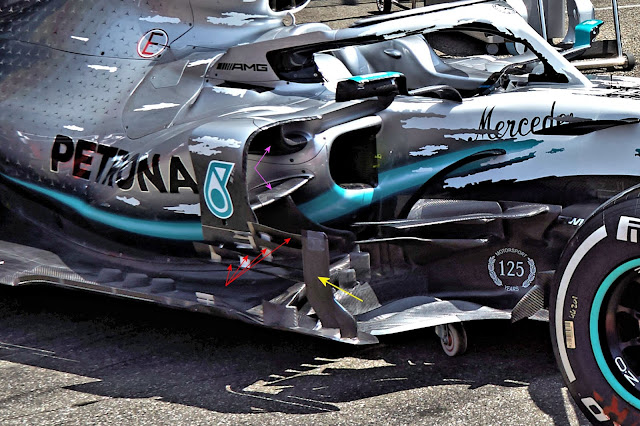 Aft of this we also have a new aerodynamic furniture flanking the sidepods, including a revised deflector panel which now comprises a narrower twin-element stachion (yellow arrow), four horizontal slats (red arrows) rather than the two vertical panels that occupied this space previously and revised shaping of the flow conditioners anchor winglets (purple arrows).
These alterations are iterational developments of the base aerodynamic concept and follow a similar line of thought to some of the teams rivals, who have already moved in this direction some time ago. However, they also fall in line with the aforementioned alterations and some changes made to the internal cooling packaging and subsequent re-wrapping of the sidepod bodywork, changes which were of course necessary in order to deal with their cooling issues in the opening phase of the season and which has hindered their use of more aggressive power modes. 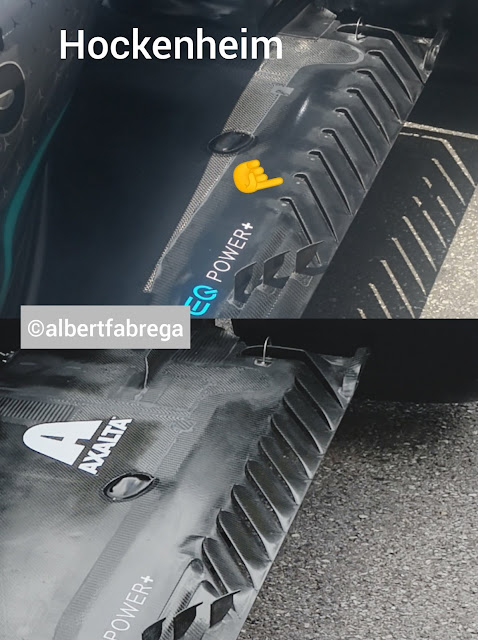 The collection of ‘tyre squirt’ slots ahead of the rear tyre have also been revised as part of this update, with the radius changed on the inboard end (IMAGE: Albert Fabrega). 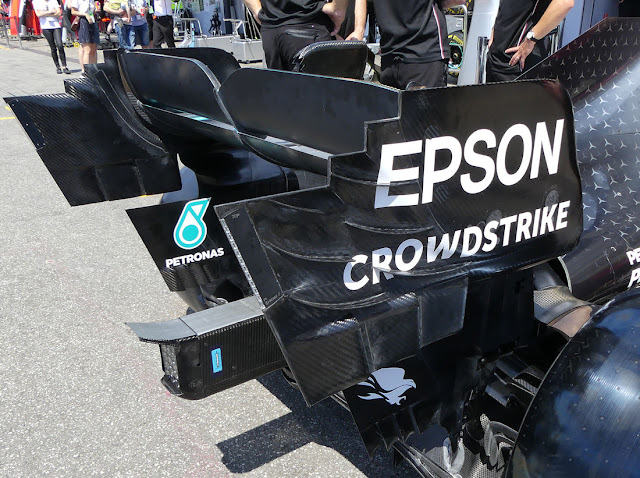 Lastly and groundbreakingly, the rear wing endplates feature a distinctive new sawtooth cutout design, allowing them to profit from 4 vortex inducing tips, rather than just the two. This is interesting as teams are still looking at ways in which to improve the efficiency trade-off that the new 2019 regulations created.
Without the louvres in the forward part of the endplate, teams have been altering the shape of the leading edge, a trick that started at Toro Rosso and has bled into other programmes - Mercedes being once such adopter, but until now the rearward cutouts had been relatively uncomplicated, such are the restrictions placed in the regs. However, Mercedes have clearly taken a lateral look at the wording and found a work around that still allows them to find L/D gains.
It’s also worth noting that the upwash strikes on the outer face of the endplate have also been doubled-up with the thickness of the endplate diminished in that region in order to maximise their width, enabling them to capture as much airflow as possible. You’ll also note that the strikes and endplate contouring is slightly unbalanced to accommodate the upper sawtooth cutouts. (IMAGE: AMuS)
I haven’t gone all-in on the sidepod bodywork alterations as the change is largely driven by a need to improve heat rejection and the previous gains made from an aerodynamic perspective may have been dialed back slightly to accommodate this. Furthermore, the design team have busied themselves elsewhere too, such as the new more expansive front brake duct inlet and revised open-face mirrors but at this stage I don’t have images that do them justice in order to show you.
The Pink Panther’s strike again 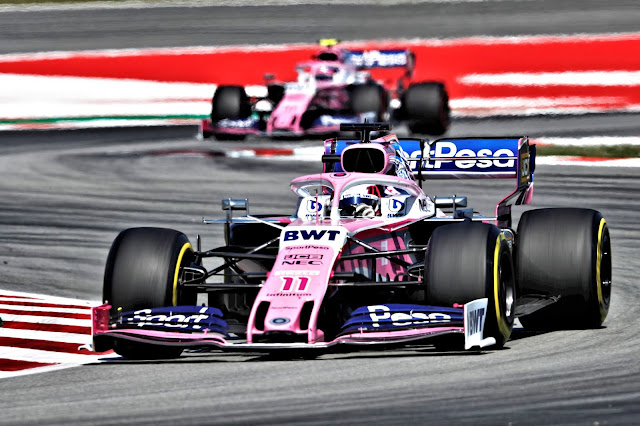 Racing Point have spent the opening phase of the season sort of collecting themselves up, rallying around at the middle to the rear of the midfield - a position that they’d not occupied for some time under their previous guise, but one that was forced upon them due to the development yo-yo that’s caused when funding is extremely stretched, or at some points none existent.
Updates throughout the early phase of the season have been more about tidying up pockets of performance, making the best of the hand they’d been dealt - ie a car that was conceived when funding was not at the teams height.
However, with their future a little more settled and funding now more readily available the team have set about creating a development pathway that will unlock the cars potential and catapult them back toward the front of the midfield. The first of these new parts arrived in Silverstone when the RP19 was outfitted with a new front wing, which featured a shorter footplate design.
For the German GP the team have moved further downstream and began to repackage the cars cooling, altering the position and makeup of the coolers housed within the sidepods. This has likely come about not only because of a desire to improve the cars aerodynamic output, which we’ll come back to shortly but also because of the close working relationship that Mercedes HPP has with the customer teams. Being looped-in by HPP on the operation of the powerunit is critical to this sort of upheaval, as without a sound understanding of the operating thresholds it becomes much more difficult to narrow down other design parameters, resulting in an overall less efficient package.
We’ve already seen how the Mercedes ‘works’ team have made similar alterations and so it’s good to see that the development trajectory is in line with all of the teams powered by them (see Williams later too). 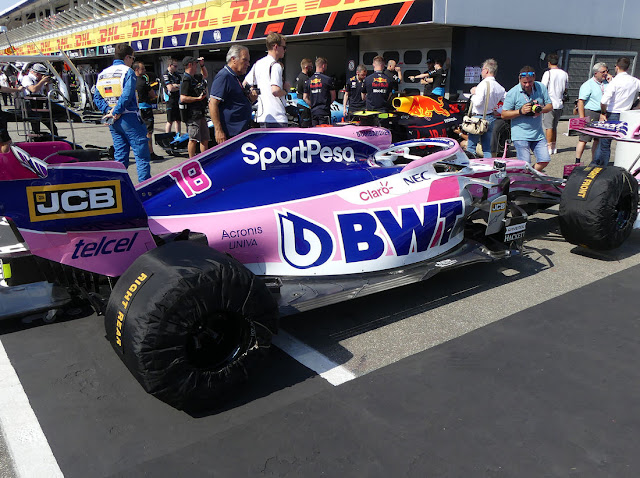 I have to congratulate Andy Green and his team on the sidepod design too, as they’re the first to fully emulate the sinuous pulldown approach that has clearly been a successful weapon in the Newey aerodynamic arsenal for a number of years now. As with everything it’ll be a trade-off that once understood and optimized for the specific package will undoubtedly yield a decent result. (IMAGE: AMuS) 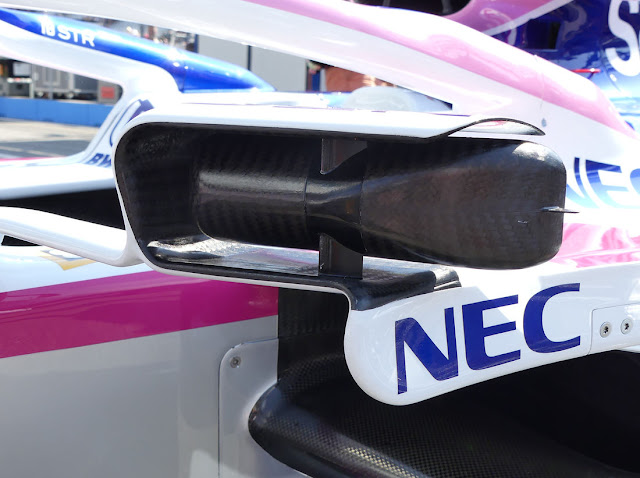 Paired with this large scale update is also a new mirror design, with the team adopting the open-faced approach that we’ve seen done by many others to a varying degree of aggression. The new design is similar in many ways to the one seen over on the RB15 too, with actual mirror housing made as minimalistic as is possible and simply framed by a curved winglet to reduce blockage and drag. They’ve achieved this by carrying over the two support design seen on the car since the start of the season, with a more conventional support housed on the cockpit, whilst another support sprouts forward from the sidepods leading edge and acts as a flow diverter in its own right. (IMAGE: AMuS) 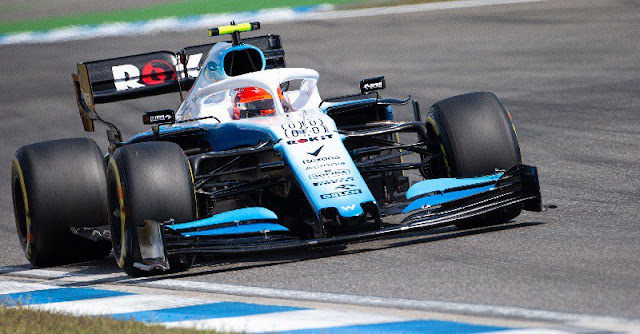 Williams descent into obscurity over the last few years has been maddening but, it would appear that they’re starting to head in the right direction at last and whilst it’ll be a slow and painful road back it was also be a rewarding one.
The FW42 was already put on the treatment table at Silverstone, as a new set of sidepod deflectors were installed to help improve flow around the cars midriff, whilst a new front suspension undoubtedly helped improve balance and performance from the tyres. 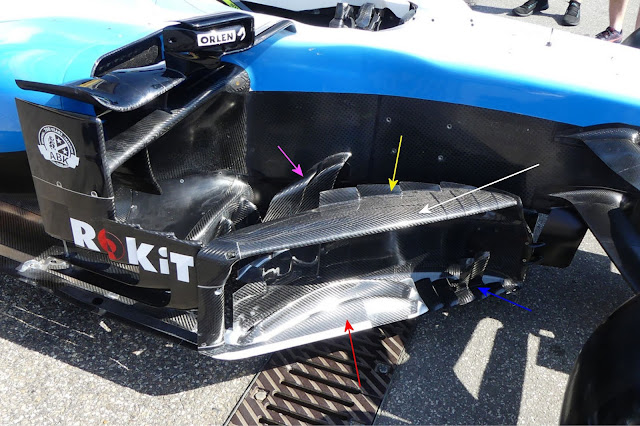 They’ve doubled down for the German GP though as more updates have made their way from the factory onto the car in the hopes of reversing their fortunes. The most obvious of these updates is to the bargeboards, with a large boomerang winglet (white arrow), similar to the one first used by McLaren, now straddling the uppermost surface of the main structure. This is complemented by two enlarged scythe shaped shadow profiles below (red arrow), a revised forward footplate and vertical vanes (blue arrow).
The main bargeboard element now features vertical slots in the surface to allow high pressure to bleed off (yellow arrow), whilst a new pair of drooping chassis vanes have also been added (purple arrow). (IMAGE - AMuS) 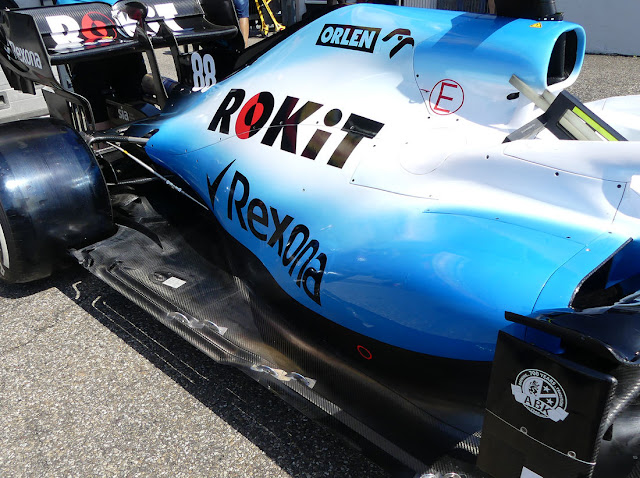 The team have also shrunk the sidepod bodywork much tighter to the internally packaged ancillaries and revised the floor, with the now almost universally adopted longitudinal slots placed along the floors edge to assist in ‘sealing’ the floor and reducing the role of tyre squirt. 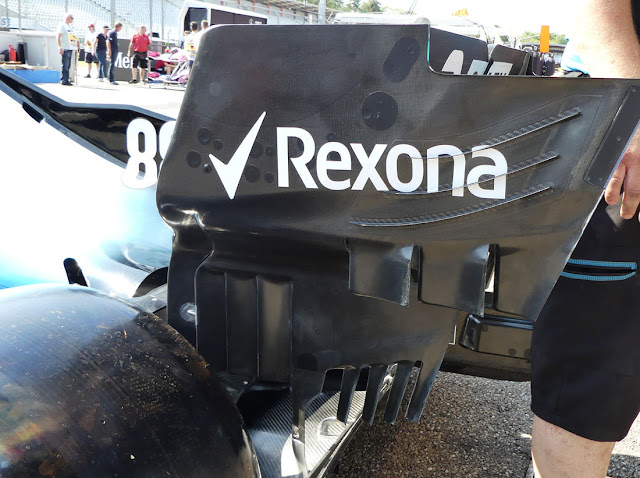 They’ve been busy at the rear of the car too, as a new rear wing endplate design is present, complete with overhanging vanes on the outer edge of the transition bounding box and three upwash strikes. (IMAGE - AMuS)
A revised diffuser layout was also trialled by the team, with a softening of the angles on the outer part of the diffuser used to change how it behaves aerodynamically.
Tagged
Newer Post Older Post