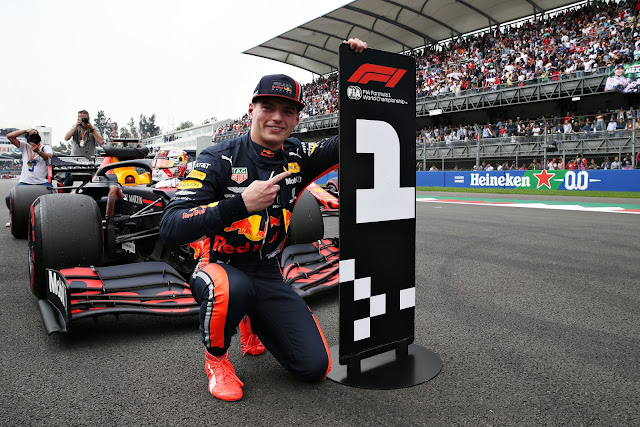 Turn 11 features an electronic warning for going wide, similar to the one in Spa which will see competitors losing their laptimes during qualifying should they go astray. With uncertain tyre data and a rapidly improving track the possibility of traffic affecting qualifying remains high. Gasly, having come down with a case of Montezuma's revenge (that has also afflicted nearly 150 F1 personnel in total) earlier in the week was rated to be on the mend and good to go for qualifying and Albon's car was pieced back together by the Red Bull staff without drama after his FP3 crash and, crucially, without any need for a grid penalty though it did run them tight on spares for the rest of this away stint.

Green Light!! Russell was first off, kicking off a session that was likely to have a massive traffic jam given the ridiculous evolution expected on what is essentially a completely green track. Kubica was next up as Russell completed the final sector of his outlap. By the time he got to the end of S1 it looked fairly clear that he was going for a 2 lap warm up in order to help fight the graining that had plagued all the teams with the variable weather. A radio message about cold tyres confirmed Russell's plan as Kubica was apparently happy to get on with it, lighting up the board purple in absence of any competition.


Magnussen and Grosjean were out shortly thereafter and then it was the deluge, as 13:30 was apparently the magic number. With the Williams across the line it was Russell ahead of Kubica and then Grosjean spun off at T1 with his first go, ruining both his fronts in the process. Magnussen was across third for the moment but now the Ferraris were in the mix and it wasn't going to be long before the fierce times started appearing.

AS the stronger midfielders started to rock across the line it was Raikkonen at the head of the field, at least until Vettel demolished him with a 1:16.692. His next challenger up was Albon, who stuck it in with a 1:16:175 a time good enough to keep even Hamilton at bay, who was only able to go P2 as Verstappen was now full on it.

A lap glittering with purple mini sectors and no surprise that Max was across the line into the 1:15's, and begging the question had Red Bull left themselves any room to improve in the next 2 sessions. Behind the Bulls it was Hamilton, Leclerc, Vettel and Bottas. Things were tightening in the midfield as well, with Gasly (having been afflicted with a rather savage bout of Montezuma's revenge earlier in the week) just outpointing Sainz to take P8 behind Raikkonen.

6 minutes to go and HAAS were out for a second go, as Stroll, Russell, Kubica, Magnussen and Grosjean were loitering about in the drop zone. P17 and P18 is where they finished and just plain dreadful as the phalanx of runners got ready for their final fling at the glories of Q2.

Hamilton was out all on his own with 3:30 left to go, looking to avoid the inevitable looming traffic jam. Russell, Sainz and Norris were next out, followed by the pair of Renaults. Interwoven with them were the Toro Rossos, Hulke, Kvyat, Ricciardo and Gasly. Bit of a gap then Kubica and Perez followed by Raikkonen and Giovinazzi. Grosjean and Magnussen were next, sneaking in an extra run for Q1, and then Stroll at the tail end of the train.

Hamilton rolled back into the pits and it was Russell leading the way, up to P18 for him. Sainz was up to P6 then immediately he was dunked on by Kvyat, who snatched best of the rest from him. Ricciardo was next up, P11 for the Aussie at leat till Raikkonen jumped up and took the place from him. Grosjean and Magnussen reclaimed their P17 and P18, which, cold comfort for sure only being faster than Williams and Stroll, on the outside and looking in, failed to summon the needed time and crossed the line without improving on his P16.

Off in search of some ceviche then as the rest turned it around for the rigors of Q2, the rapidly evolving track and increasing temperature posing riddles wrapped in enigmas for the race engineers....

Q2 started with both Toro Rossos wasting no time, rocking out with the Medium tyre. Mercedes and Sainz copied this plan and it was apparently a detente, all the runners popping up with the yellow banded boots. Behind the Mercedes, it was Vettel, Hulkenberg, Ricciardo and Leclerc, with the Toro Rossos threading their way through on their hotlap. Kvyat won that battle and for the moment they were atop the leaderboard, with Sainz a distant third.

Vettel was first up for the sharp end and he was up to P1, with Leclerc 3 tenths back. Hamilton occupied P3 another 2 tenths back, with Bottas a distant P8, rapidly dropped to P11 as the Red Bulls finished their lap. Verstappen took P2 away from Leclerc and Albon was across a much more expected P5 as Bottas got it together for another go, and this time he got it right, up to P4 and a tenth up on his teammate, showing again how rapidly the track was rubbering in. The midfield had eventually split on the Softs, with Perez, Hulkenberg, Norris, Ricciardo, Giovinazzi and Raikkonen ultimately opting for the Softs. 6 minutes to go and the track was clear as they field got ready for the final tilt at the hallowed grounds of Q3, Sainz, Giovinazzi, Raikkonen, Gasly and Kvyat all on the outside looking in as the teams made their last minute tweaks in prepartion for the final runs.....

3 minutes to go and action exploded onto the track, in the form of Sainz, Hulkenberg, Ricciardo, Gasly, and Kvyat, all on the Soft tyre. Behind, Norris and Perez, followed by the sharp end, all sporting Softs save Mercedes.

Sainz was looking nifty in the corners and it was reflected on the board, green and purple as he rocked up with a P4!!! Oh my!! Hulk P9 and then P10 until Norris came along in P6 dropping him. Gasly P10 and then Perez, only able to nail P11 but possibly the best spot as he gets free tyre choice for the race tomorrow. Mercedes were to the top with their laps, with the rest of the sharp end abandoning once they realised that there was no threat to making Q3.

Off in search of some Barrique de Ponciano Porfidio Tequila went Perez, Hulkenberg, Ricciardo, Raikkonen, and Giovinazzi as the rest prepared themselves for the grueling chase for the ultimate palmares of pole position. Investigation underway considering Kvyat and a potential unsafe release to pass the time before the final session opened, and, well, after as suddenly no one wanted to be first in the pool.

At last, it was Norris bravely taking the plunge, followed by Kvyat and Gasly. Sainz was next and then crickets.... as they wound their way round the second sector off rocked Mercedes, Bottas leading Hamilton and then a glut of drivers behind Vettel who was next on track: Albon, Leclerc and finally Verstappen.

It was Sainz over Norris for S1, but it was Kvyat ahead of Norris across the line, until Sainz came through and confirmed himself as king of the midfield as the sharp end got it together. Hamilton ahead of Bottas then and then Vettel to the top as the Red Bulls were last across and Albon first, P4 and then Verstappen absolutely crushed it!!! 1:14.91 with Leclerc following him across and into P2 just a tenth off....

AS they track emptied then it was Verstappen, Leclerc and Vettel followed by Hamilton, Albon and Bottas, who had a bit of a ragged moment on his lap. For Formula B it was Sainz, Kvyat, Gasly and Norris as the teams got to the task at hand, giving their drivers the tools they needed to steal the ultimate prize.

2:30 to go and off went Norris, then Kvyat, Gasly and Sainz. Only the smallest of gap and it was Albon leading the way for the sharp end, then Leclerc, Bottas, and Hamilton, with Vettel and then in the catbird seat, Verstappen, last of all....

Just inside the last minute and Norris hit the line, up on Kvyat and down on Gasly but in the sharp end it was Leclerc looking fastest.... at least till Vettel completed his first sector whilst Verstappen was slower in the opening gambit.

And it was looking to be the Leclerc show until he went wide in the last sector and ZOMG then it was Bottas, just behind him, final corner, into the wall and that ended it for everyone behind. Or at least it should have as despite that, Verstappen improved his time (matching his previous sector 3 time), with Leclerc still in P2, Vettel having been caught out by the Bottas crash and slowing significantly. On replay, Valterri went the slightest bit wide on the outside exiting the previous turn and tagged the wall with his rear and that pendulumed him into the barrier and he was dragged along them till he smashed headfirst into the TecPro barrier where it protruded from the hoardings.

AS the controversy over Verstappen's time began to swell, Horner claimed that there was no yellow board, with Hamilton also completing his lap but contra that Binotto stated that for his drivers, they both had yellows flash up on their dash. On replay, it was clear that there WAS a physical flag at least (though on the outside of the corner) and the only question was going to be what the stewards would ultimately do about it, with Verstappen's first run still being fast enough to put him on pole....

Tomorrow's race starts with Verstappen, Leclerc, Vettel, Hamilton, Albon and Bottas filling the first 3 rows, though that depends entirely on Bottas's car not needing any parts that would send him down the grid, far from a certainty (and perhaps some good lawyers for Max). Best of the rest starts with Sainz and Norris followed by Kvyat and Gasly in what will be an utter test of tyre management for the drivers, given the difficulty of keeping the Pirellis from overheating. The changeable weather has also made a contribution, namely, this could also be the rare race that sees a 2 stop being the best strategy. Given that, Perez in P11 on the Medium tyres could be in a sweetheart position as his tyre whispering powers are quite well regarded. It will be one for the strategists and the biggest unknown is going to be Verstappen's ability to keep his tyres fresh as Mercedes plays the game of how close to the cooling limit can we go. In the midfield, all eyes will be on King Carlos as the class of the Mclaren chassis continues to shine through in the brutally competitive battle as homeboy Perez seeks to cover himself and Racing Point in a bit of glory....