Matt 'Trumpets' Ragsdale gives us the skinny on how qualifying for the Japanese GP unfolded... 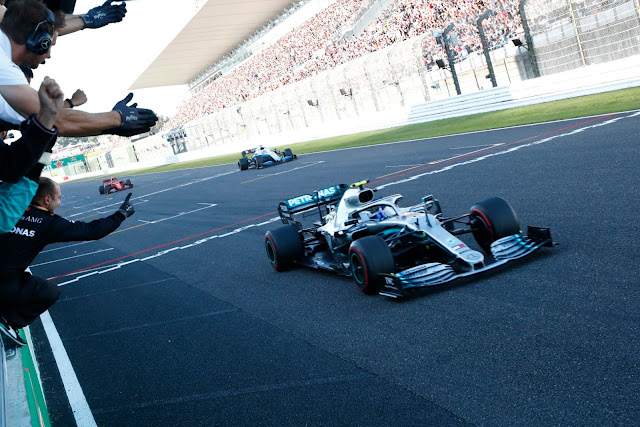 Glorious blue skies arced over the hallowed asphalt at Suzuka as the last minute preparations were feverishly underway on the grid. Kubica was looking at a pitlane start after his crash in qualifying forced Williams to change his chassis. Similarly, Magnussen was dinged 5 places for his gearbox change, a direct result of his crash during qualifying, which effectively made no difference as the only person behind him was starting from the pits. Hulkenberg, also a victim in quali, was done thanks to a hydraulic leak in Q2, which stopped Renault's forward progress, given Ricciardo had a suspension issue which put him out in Q1...

Vettel, Leclerc and Verstappen all managed to have an extra set of Softs available, which meant that the 2 stop strategy remained a possibility for them. According to Pirelli, the one stop was quickest, coming in for the Mediums around lap 24-27, followed by the 2 stopper, with 20 lap stints on the Softs, and 13 laps on the Mediums at the end. They rated that as quicker than a one stopper coming in around lap 20-23, and going the distance on the Hards.

As the start approached a radio call was heard stating that the track was cooling, and would continue to cool throughout the race and given the Friday running, the focus was once again on Mercedes' race pace as it was generally thought that Ferrari would be vulnerable to excessive tyre degradation, especially if they were being pushed. Of course, running in dirty air does the car no favours and if Mercedes fail to get round them at the start it could be a long afternoon as they look to try and close out the Constructor's Championship, needing a 14 point advantage to clinch it today.

McLaren seem to have put themselves into their own little world, but still a bit far to consider seriously racing the Red Bulls for an entire race distance. Giovinazzi, Raikkonen, Ricciardo, Russell, Magnussen, and Kubica all elected to go alternate strategy and start on the Medium tyre.

Lights Out!!!! Great Start by Bottas, as he bombs down past Vettel who grabbed a lot of wheelspin, as Leclerc, too had a terrible start and immediately collides with Verstappen, trying to go round the outside of the Ferrari through the first two turns. It looked good for a moment, but then Leclerc understeered into the side of the Red Bull and right off went Max. Leclerc's endplate was dangling off and then it tore off and went hurtling back and took off Hamilton's right side wing mirror.

Verstappen was back in the race, P18 and Leclerc was in on lap 4. Both McLarens were by Albon but lap 5 saw Norris into the pits, and out on the Medium tyre, presumed for a puncture, after Albon had a late lunge into the chicane that resulted in contact. With Leclerc's pit and Verstappen's off, this left Albon in P5 and Lando thoroughly disgruntled. The stewards were quick to pick up on that, and as if that wasn't enough, Verstappen complained that his car was moving a large amount under braking.

Lap 7 and the other big winners were Magnussen up to P12 and Perez up to P9. The Leclerc/Verstappen incident which had initially been rated as not worthy of investigation, was suddenly deemed to be worthy of being looked at and whilst that was being processed, Leclerc's left side wing mirror flew off.

Lap 10, and having almost catalogued the legalities and then Vettel was dinged for a false start, having clearly moved and then stopped before the lights went out.... And that's how Ferrari did themselves this time round. Never a dull moment.

At the front, Bottas was nearly 4 seconds up on Vettel and it was lap 15 and the stewards decided no penalty for Vettel, apparently because he stopped before crossing his grid line and was stationary when the lights went out? Maybe? Will have to see what they say about it later.... Regardless, the Ferrari was struggling for pace and was nearly 7 seconds back. Behind, Leclerc had worked his way up to P12.

Verstappen retired the same lap and Albon was in and out for his Mediums, emerging P10. Lap 17 and Vettel was in and Ferrari chose to put him on the Softs, a clear 2 stopper. Bottas was in the following lap and he was out on a set of Mediums and the race was on.... This left Hamilton in the lead, and likely going deep. And confirmation as Bottas was told he was on a 2 stop and Lewis was on a one stop and Valterri would need to pass him on track... Oucharooni!!!

Lap 20 then and Albon was now all over Ricciardo and Bottas was chunking large chunks of time out of Hamilton. Despite being on the slower tyre, Valterri was extending his lead over the Ferrari. Lap 21 and Hamilton was in as the Softs were simply NOT lasting at this pace. Out on a set of Mediums, but with a fair amount of managing to do. On the radio, he was told it was perhaps marginal for a one stopper and he might need to pit again.... Madness.

At the back, Norris, on lap 26, was getting crushed on his now 25 lap old Mediums as Leclerc rocked in for a new set of Softs and off he went. Sainz was in for a set of Mediums clearly on the one stop. Hamilton meanwhile, had just taken a full second out of Bottas and at 18 seconds back, was looking to keep himself inside the pit window of the Bottas and Vettel to have a chance at the end.

Vettel was making no progress against Bottas, and was beginning to lose serious time to Hamilton. Ricciardo hit the pits lap 30 and that left Sainz best of the rest, in P5 followed by Gasly and Stroll. Leclerc had worked his way up to P9 and was immediately all over the back of Hulkenberg. Lap 32 saw Vettel in for his last set of tyres. Hamilton stayed out, and aside from Russell, there was a large gap between him and Hamilton that was delightfully free of traffic, Ferrari having pitted him as he caught the back of the tail that Bottas was in the midst of carving through.

Hamilton was 13 seconds back of Bottas and Vettel was JUST inside his pit window. He was 32 seconds back of Bottas, however, and he needed to clear at least 10 of those in order to be effectively even with Bottas on track. Lap 35 and Albon was in for his second stop, back out on a set of Softs. Leclerc rocked by Gasly up the inside on Spoon and into P6 for him, quite the recovery.

Lap 37 and Bottas was in, out on a set of Softs, and 7 seconds up the road from Vettel and 9 seconds back of Hamilton. It was all to play for as the finale of the race shaped up rather nicely. Vettel rocked in a purple first sector as he hit some free air. He kept up the pace and set fast lap for the race, now 7.5 seconds back of Bottas, who was not making much progress and was being told, on the radio, that Hamilton WAS going to be pitting again.... Allegedly.

Further back, Ricciardo had worked his way up to the points, and was now behind his teammate as it was Gasly leading the train, with Stroll, Perez, Hulkenberg and Ricciardo all behind him and in DRS. Perez was in though and along with him, on lap 43, was Hamilton. Out on the Softs with 15 seconds and 10 laps to go...

Ferrari wanted to bring in Leclerc, and he, along with most of the rest of the audience, wondered why exactly, as he was in P6 and only 5 seconds back of Sainz. Lewis was wasting no time, and chunked nearly 3 seconds out of Vettel. Ricciardo snuck by Hulkenberg, or rather was swapped in front to have a go at Stroll. And he was immediately by and up to P8.

By lap 47 Hamilton was well within DRS and it looked to be only a matter of time. Into Spoon he got close but Vettel was able to stretch it down to the chicane, where Hamilton once again was able to get close into the and just about got him onto the start/finish straight.

5 laps to go and with all the midfield traffic coming up, the battle raged. with Ricciardo now at the head, having rocked by Gasly. Leclerc, having pitted for Softs and an effort to take away the fast lap from Hamilton, was told to have a go at unlapping himself. Lap 50 and it all came together as Vettel got bottled behind Hulkenberg and into Spoon he and Hamilton were practically nose to tail. Vettel slipped Hulkenberg and Lewis followed and down the straight to 130R they went, Vettel now stuck behind Gasly, although he benefitted from DRS. Through the chicane Vettel was by Gasly and then Hamilton was just the barest of tenths behind. Down the straight and into Turn 1 and Lewis gave the outside a look but there was nothing doing and on they went.

The next lap was a recovery for Hamilton and as they came through the chicane to start the final lap, once again Hamilton had closed up within half a second and into the first turn they went, Vettel taking the standard line and Hamilton having a momentary peek up the inside before Vettel closed the door, and that was the best chance gone. Behind, Perez, having a go at Gasly, was mostly around the outside heading into Turn 2 and as he turned for the apex he encountered the front of Gasly's car and much like Verstappen at the start, right off he went, drawing the yellow flags. Leclerc's tilt at fast lap came up short and thus it was that Mercedes clinched the 2019 World Constructors Championship. Albon with a hard fought P4, though Norris was still a bit sore about the outcome of that one as he finished P13. And if that wasn't enough for you, an error with the chequered flag meant all the results were actually taken from lap 52, which was bad news for Stroll, who got kicked to the kerb in P11, but good news for Perez, now credited with P9 and Hulkenberg now credited with P10... Go figure.

Aside from Norris it was another good day for McLaren, with Sainz in P5 and the car looking like it is the class of the midfield. A good recovery for Renault as well, with both drivers in the points and in particular, Ricciardo going P7 after a blitz of late race passes.

And remember to play nice in the comments!!