Taking a look at the changes for 2021

It's that time of the year again - new regulations means more restrictions but what's changed and how will it have an impact on what we see out on track and for the designers? Let's take a bit of a deepdive...
Firstly, the biggest talking point is that the new 'ground effect' style cars have officially been put on the backburner until 2022, owing to the fact that the 2020 cars will have barely been used. The FIA, FOM and the teams have agreed that the sensible thing to do is to carryover as much from 2020 as is possible to '21 in an attempt to keep costs lower. This means that for the first time there's an extensive list of components that are considered homologated, with their specification being frozen after two key dates in the 2020 calendar.
The homologated components include the survival cell and roll structures, the plank, front and rear suspension and brake assemblies, fuel, hydraulic and engine systems (including radiators, intercoolers and chargecooling systems), electrical systems and looms, onboard fire extinguishers, drinks system and track equipment, such as guns, jacks and gantry equipment.
So, essentially this means the core asset of the car will remain unchanged, however one component listed under the aerodynamic section might well have an impact on the design of the rear wing. The teams will only be able to homologate 2 different options for the rear wing adjuster, although different linkages are permitted.
The only other change that locks in development from an aerodynamic perspective is the wheel rims, with only one specification allowed for 2021.
Aerodynamics
The same freedoms in terms of aerodynamic development for 2021 exist as they have before, with one minor and one major exception - the design of the floor and wind tunnel time. 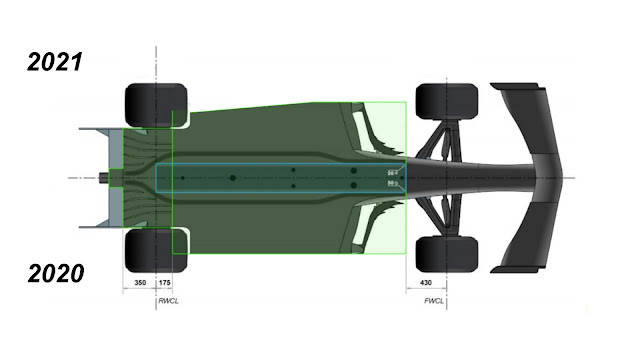 In order that Pirelli don't have to make a concerted effort to deliver a new tyre for 2021, given they're still expected to develop the 18" tyre for '22 onwards, the decision has been made to try and cut some downforce from the cars. This will be achieved by trimming the edge of the floor to give it more of a boat tail effect, which in-turn reduces the scope for managing tyre-squirt created by the rear tyre and which is damaging to the performance of the diffuser.
On top of this, a regulatory mishap from the changes made in 2017 is finally being dealt with too. Since 2017 there's been a development war being waged over the outer 100mm of the floor, with a plethora of fully enclosed holes deployed there to try and help 'seal' the edge of the floor from the ingress of wake turbulence created by the front tyre.
The end goal, in this case, is to improve flow under the car and increase the effectiveness of the diffuser. However, the dimensions relating to floor continuity that were left 'as is' for 2017 have been fixed for 2021, meaning no more fully enclosed holes. That's not to say we won't see a return to slots, just as we had prior to 2017 but, their effectiveness is slightly dulled when compared to a hole.
In order that teams simply don't try and make up these losses through aero elasticity there's been alterations to the amount of deflection (may not deflect more than 8mm, rather than 10mm) and the point at which measurements will be taken (650mm from the car centre plane, rather than 600mm) during flex tests too.
Aerodynamic handicapping
For the first time Formula One will use a weighted system, whereby championship order will dictate how much wind tunnel time a team is allowed to use.
In recent years each team has been able to do 65 runs per week with a maximum tunnel occupancy of 60 hours.
From the 1st of June 2021 the teams will now have to adhere to a new structure though, with the amount of runs, wind on time and tunnel occupancy based on the position their team finished the previous season in. Finishing in first, for example, means you'll only get 90% of the allotted runs/time from the given baseline, whilst those finishing last will get 112.5%
The baseline is as follows:
Runs: 320
Wind on time: 80 hours
Tunnel Occupancy: 400 hours 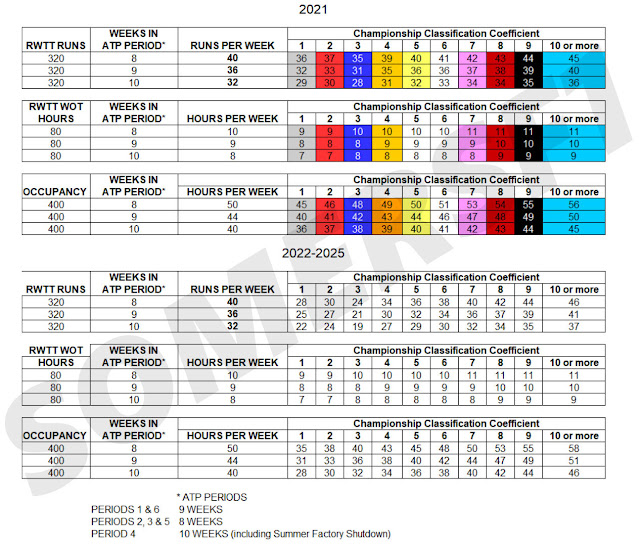 The problem with this weighting system compared with the old way of doing things is that the FIA have complicated matters by using different ATP periods. Meaning that there isn't a one size fits all run, wind on time or occupancy number either. As such I've created this spreadsheet to try and simplify the numbers.
In the interest of our example lets say that Mercedes wins the 2020 championship and Williams finish last, just as they both did in 2019 (I've added colours relative to the teams to try and make identifying them in their 2019 order easier for the sake of this example).
That would mean that Mercedes would be able to do 36 runs per week, over the course of 45 hours in a 8 week ATP period. Meanwhile, Williams could do 45 runs per week over the course of 56 hours.
Weight
Once again the minimum weight is on the up, being raised from 746kg to 749kg, whilst the minimum weight of the powerunit is also increasing from 145kg to 150kg.
Powerunits
Whilst on the topic of powerunits there's a couple of interesting alterations to speak of, the first in relation to the design of the valves. Article 5.17.6 previously stated that 'Hollow Stems' were permitted but the wording has been changed to 'Hollow Valves', meaning that the valve heads can now also be hollowed, meaning they can either be filled with sodium, or similar for cooling purposes 3D printing used to create an intricate but lighter weight cavity.
Exhausts are now covered within the same limitations as the ICE, MGU-H-, MGU-K, Turbocharger, ES and CE, with only 8 sets (defined as a pair of exhausts for the left and right bank) to be used during the season, with the same punitive measures applied should they exceed that limit. The inclusion of this within the sporting regulations suggests that a practice had become common for teams to exploit lighter materials or with less fatigue resistance that would boost performance but need to be replaced more regularly. In fact, as they were technically unrestricted in regards to numbers I guess you could replace the exhausts as often as your saw fit.
The FIA have also moved to clarify a contentious issue with regard to the number and position of the mounting studs that are used when installing the gearbox case to the powerunit. The wording loosely suggested six studs were required but in fact as few as four could be used if mounted in the correct positions, something that Ferrari have done in the past and Mercedes have for 2020. In both cases this was done in order to better package the exhausts, as they take up the space ordinarily occupied by the the bolts. This comes with its own challenges in terms of torsional and rotational rigidity but obviously not insurmountable ones...
The powerunit manufacturers are also affected, firstly by bench testing, which for the first time sees restrictions on the number of test benches that can be used and for how long and through a gentle glide toward a total powerunit freeze. For 2020 the specification used for the first race will have to be carried throughout the entire season, with exceptions allowed on the grounds of cost savings, reliability or supply issues. A new specification will be allowed for the start of 2021 and one update will be allowed during that season. For the start of 2022 a new specification can be introduced once more but then fall under a freeze until the end of the season.
This will continue to be the development cycle until 2024, when the specification raced at the start of that season will be the same as the one used throughout 2023.
In summary
The changes made, both technical and sporting, have been done with a modicum of common sense and inline with the cost cap that will also feature from 2021 onwards. I still believe that the introduction of the new cars for 2022 is optimistic at best and now that teams have agreed to fall in line in terms of homologation, spending and development that sticking with the current car until at least 2023 is a far more favourable outcome.
Tagged
Newer Post Older Post