Matt 'Trumpets' Ragsdale gives us a rundown of the events that unfolded during qualifying for the Austrian GP. 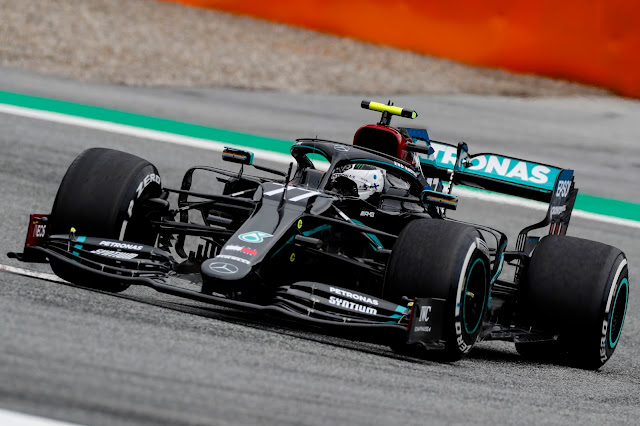 Well, that was quite the off season. Ferrari ditching Vettel, Team Xerox tilting for the top 3, Red Bull doth protest a wee bit too much and somehow, not remarkably, Mercedes look to be driving off into the distance yet again, an era of (mostly) unprecedented dominance that will no doubt be much discussed with asterisks and caveats. Yeah, and the whole pandemic thing. And yet, the more one looked, the more the song remained the same, Ferrari in disarray, Renault looking to make a big step, Red Bull to be on pace with Mercedes, tight midfield battles and Ted calling the entire front half of the car a bargeboard, comforting, familiar rituals in these strange times.

That said, both HAAS and Ferrari admitted up front they had no development to bring (even Williams brought some) and even worse for the tifosi, they admitted that their entire aero direction was incorrect and after suffering correlation issues to boot, they were changing course and were bringing a new concept to Hungary, leaving them defenseless at the start of the season from the Mercedes juggernaut and potentially adrift in the midfield. In general, a new concept after the season starts is a white flag for the team so it falls to Red Bull to tame their pointy car to provide something that vaguely resembles competition for the Silver Arrows. The juniors in the midfield were perhaps the most exciting feature of the weekend, as FP3 indicated it was going to be an extremely fraught struggle between them for ascendancy and Williams, perhaps, has brought enough to the table to quibble at the back.

Green Light!! Latifi was first off the mark, to make up for his sins in FP3 (he crashed), along with Alfa (not Alpha) in the form of Raikkonen and Giovinazzi. Russell was next out along with Stroll, as Giovinazzi rocked in a 1:05.478 with Raikkonen a tenth behind. Latifi limped across with a 1:07.208 as Russell looked to continue his easy qualifying dominance over his teammate. Nothing but green sectors for the Williams driver as he went P3, for the moment with a 1:05.592. Latifi's second run was a bit tidier, a half second back of Russell as the track, with 10 minutes left had quickly filled with the rest of the teams, save Mercedes and Renault.

AS the times rolled in it was Norris outpointing Stroll, Verstappen to the top and Sainz P2, ahead of Perez. Albon was a bit of a disappointment in P6 and even worse, Leclerc in P9 with Vettel P4 were rapidly dashing any hopes the tifosi may have harbored. A neat P6 for Gasly, ahead of Albon, continued his streak of quietly demonstrating that perhaps RBR may have been hasty with last season's decision. Ooooh, Hamilton to P12 and Bottas P4 meant a bit of work left for Mercedes and with 6 minutes left and the last times rolling in it was Raikkonen, Magnussen, Russell, Grosjean and Latifi
on the outside looking in, with K-Mag complaining of being balked by Leclerc. Hamilton wound up all the way down in P14 so it was going to be a less than ideal 2nd lap, which he clocked with just around 4 minutes left, bouncing up to P2 but still a less than ideal time.

As the last runners headed to the pits to get ready for their last chance to escape the purge, perhaps some steering issues for Hamilton from the team radio. Russell up to P15 as they hit the 2 minute mark, with Stroll rocking a fairly quick lap and to the top he went, with Leclerc rolling out for another go as the clock ticked ever closer to the end of the session. And FOMO ruled, as only Albon remained in the pits with everyone else electing to have another go. Grosjean on a better lap to his first effort stuck the knife into Russell, putting him out of Q1. Verstappen bounced Stroll to P2 and it was a wet blanket for K-Mag, unable to get out of Q1.

So, it was Magnussen, Russell, Giovinazzi, Raikkonen and Latifi going no further, off in search of some spaetzle as the rest turned it round for the glories of Q2. Verstappen, Bottas and Hamilton at the front, as one might expect, but Stroll P4 seemed a bit unexpected and Russell just a tenth out of Q2 had to be rated as a genuine improvement for Williams, which looked to finally be making some inroads into their disaster of a car. Albon damaged his wing, explaining his non-participation in the sorting lottery, and the question about Hamilton's steering remained unpursued as Q2 loomed.

Q2 opened with a whole lot of nothing, as the waiting game was now being played, and the only issue to be settled was which teams were going to bet on getting through to Q3 with the Medium tyre. 12 minutes left and all was still a mystery, with the track empty and the commentators beginning to reach for material.

At last, with 11 minutes left Mercedes got the party started, and with that the dam was broken and the pitlane filled with anxious drivers, fighting in slow motion for the ideal place in the slipstream, without being too close to spoil their aero. Bottas, Hamilton, Sainz, Stroll, Norris, Vettel, Leclerc all in a bunch then Kvyat Grosjean and Gasly. Verstappen, the sole Medium tyre runner, then Gasly and it all got messy as the hot laps kicked off. 1:03.325 for Hamilton, 1:03.53 for Bottas, then Norris, Stroll and Perez. Ricciardo managed a P6 and it was Verstappen, P7 on the Mediums, then Sainz and Vettel rounding out the top 10. Albon was running on his own and a big twitch ruined his lap, leaving him P13 in what was increasingly looking like a very hard to driver RBR. Verstappen managed to improve to P6 on his lap, but ooooh, would they stand with that hand? Enquiring minds wanted to know, but were going to have to wait as the teams rolled in to make their last, desperate adjustments for the last shout at the hallowed ground of Q3. Gasly, Kvyat, Albon, Ocon and Grosjean had it all to do as the seconds ticked down.

2:30 to go and Stroll led the way, Ocon next and then the deluge as all the runners were back out and Verstappen on the Softs, to the surprise of no one, dead last with the ability to bail should his time stay in the top 10. Ocon was the first off to try and save himself, he had run a 1:04 dead in FP3 and was nearly a second off that with his first run. It was not to be and he was locked into P14 a disappointment indeed as Hamilton took another 0.3 off his time and was then outdone by Bottas, and with Leclerc and Vettel in P9 and P10 respectively, in the bottom spots it was Albon, making up for his earlier mistakes, rocking up to P3 and brutally putting Vettel out of Q3. Wow.... That said, from Albon in P3 to Leclerc in P10 there was just 0.3 seconds in it and the midfield battle was looking lit for tomorrow's race. Verstappen through on the Mediums was also a thing and all that remained was the final tilt for the palmares. Going no further and off in search of some weissbier were Vettel, Gasly, Kvyat, Ocon, and Grosjean with Norris best of the rest heading into Q3 as the battle with Racing Point was hotting up tremendously.

Q3 again kicked off with criclets as no one wanted to be first out of the gate and making a slipstream for their competitors. 9 minutes to go before anyone deigned to turn a wheel and it was Mercedes, apparently unconcerned, well, who are we kidding, utterly unconcerned rolling to the end of the pitlane followed by the rest of the field in short order. Norris, Sainz, Perez and Leclerc trailed closely, then Verstappen as the Merc battle kicked off. Hamilton, crushing S1 as Bottas purpled S2 and then S3 and it was Bottas, with a 1:02.939 and Hamilton, unable to better him slotting into P2 on what was ostensibly their banker runs. Verstappen into P3 and Albon P4 as the expected order began to reassert itself. Sainz, Perez and Leclerc filled the next 3 spots, and Norris, Stroll and Ricciardo elected to bet it all on a single run, a lack of tyres cutting short their chances in the final battle.

Stroll took advantage of the interval to roll out for his effort, and as he kicked off his hot lap, the rest of the runners emerged from the pits to have their final go for all the marbles. P6 for Stroll set the mark for Perez, who was just on his outlap. Macca traffic jam in pits as confusion reigned over who was going to lead, throwing everyone behind into disarray as they loitered side by side and leaving Norris at the back of a long train when it finally got sorted. Yellows suddenly flashed up as Bottas took an unplanned trip through the gravel which did no favours for Hamilton (tinfoil time perhaps, did he Rosberg Hamilton?), but Lewis kept on it and was through with a 1:02.951, 0.012 seconds short of pole and it was Bottas, taking the first pole position of the year.

Verstappen improved his time a bit and then it was Norris, splitting the Bulls and perhaps the story of the day, as Team Xerox was expected to be playing that role, and not McLaren. P6 for Perez, followed by Leclerc, Sainz, Stroll, and Ricciardo, who surprisingly did not improve on his Q2 effort. Waiting to see how the yellows affected the laps behind and it was hard to overlook just how poorly the Ferrari powered cars had done relative to their last year's performance, with all of them being slower than last year in relative sessions, whilst their competitors had all improved. Sure enough, Ricciardo reported yellows for his run, so there's an explanation for Renault fans, but Hamilton said it hadn't affected his lap as he was apparently close enough behind to not catch them...

Tomorrow's race is decidedly setting up to be 3 different races, an epic midfield battle with 0.4 seconds covering P4-P10, Hamilton versus Bottas and the Medium tyre, played by Max Verstappen, versus the rest of the field, played mostly by Mercedes. Which should be enough for some thoroughly entertaining battles punctuated by tense tyre and fuel management periods (well, tense if you're glued to sector times to be fair). Ferrari will be searching for redemption in the form of race pace, and Vettel, at least with a free choice of tyres to even up the strategies will be eying how far up the top 10 he can reach. Of course, last year's race was fairly compromised by cooling issues for Mercedes, so if it's hot enough perhaps that extra wrinkle might appear, but given Mercedes' penchant for sorting these details out... Fingers crossed!!!