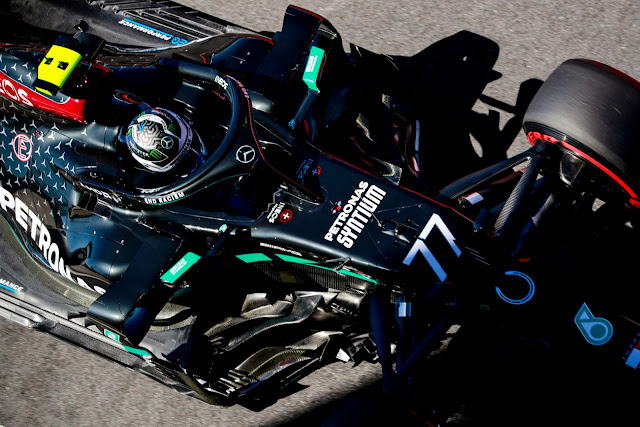 Blistering sun ripped through the cerulean vault of the sky, thin wisps of cloud tossed about the heavens by a fierce, arid wind as the paddock was a hive of activity, both on track and off. New powerunits for both Ferraris after Vettel's failed yesterday at the end of FP2 and vomited oil all over the track. But the real action was in the steward's office as the Racing Point decision (TL;DR guilty of cheating on their homework) left Macca, Renault, Williams and Ferrari (yes, cheating for me and not for thee apparently) appealing for harsher sanctions, with Zak Brown describing what RP told them as BS, whilst Racing Point, still convinced of the non-smelliness of their excrement, are appealing to have the entire decision thrown out....

The even bigger news, though much less heralded, is the fact that Mercedes is in fact employing a Ferrari level quit threat such is their unhappiness with the new Concorde agreement, that all the rest of the teams seem to be happy enough with. No word as of yet as to WHAT it is that has got them into such a tizzy, but the combination of being dragged into RP's dirty laundry while apparently being promised it was squeaky clean along with the perceived unfairness of the new Concorde, saw Wolff give a remarkably emotional post FP2 interview yesterday on Sky.

Whew, the on track action seems a bit of a relief by comparison....

Green Light!! Grosjean, Magnussen and Hulkenberg were first to dip their toes into the rather warm water, to the surprise of no one Hulkenberg getting the best of that contest by slightly more than a second. AS they were winding their way around the track, the rest of the runners were taking to the track, to not entirely warm up their tyres. Worth mentioning that both HAAS and Russell were already on their Medium tyre, presumably in an effort to make Q2, as the heat was making them faster than the Softs usually reserved for that purpose.

Norris bounced up to P2, at least until Leclerc came through, taking that spot away from him. Behind, the Mercedes were on their lap and it was Bottas, early winner of their private contest. Wait, though, was that Verstappen rocking a purple S1? Why yes, yes indeed it was and by containing the bleeding in the following two sectors he climbed to the top, momentarily ascendant in his Red Bull.

8 minutes to go and it looked like HAAS had rethought the Medium tyre gambit, both of their drivers were out on Softs, though they would've been better off with any other powerunit quite frankly. Renault had got themselves on the board in the meantime and it was Ocon to P8 and then Ricciardo, all the way up to P5 and nearly half a second faster than his teammate. Of note, the stewards had mentioned Ocon and Russell being investigated after the session, suggestive that some sort of silliness had occurred between the two.

6 minutes left and they found the replay, and it was Ocon, not on a hot lap, looking like he fully blocked Russell as he was in the process of overtaking an even slower car. Of course, one's race engineer should also not go without blame in those situations and the entire FP3 was full of harbingers of this inevitability.

Albon ran wide at Chapel, despite an extended kerb, and as the commentariat speculated as to whether or not there was damage, the remainder of the teams were back on track for the final go at the glories of Q2, with Albon, Magnussen, Raikkonen, Giovinazzi and Latifi on the outside looking in.

Giovinazzi to P15, Russell, to P8 which put Giovinazzi right back out. LAtifi P16 Gasly P4 and then it was Albon to P3, matching Verstappen's time. This put Ocon into P16 and as he hit the line it was P8 for the Renault driver, submerging Kvyat who had an issue with his car, complaining something on the floor broke....

So it was that Kvyat, Magnussen, Latifi, Giovinazzi and Raikkonen (whose lap was deleted) going no further, off in search of some fish and chips as the rest turned it around for the rigors of Q2. Notably, Vettel was again struggling, having wound up P14 at the end of the session.

Grosjean was first to break the seal, followed by Ocon and the pair of Mercedes, Hamilton leading Bottas and all 4 cars on Mediums. In fact, as the runners streamed out of the pits, it was all of them on the Mediums save Verstappen who was rolling the dice with a set of Hards, no doubt being closely eyed by the Mercedes and Ferrari engineers....

Early days it was Ocon, lighting up the the board with purple, though as the Mercedes duo progressed the mini sectors gradually winked green, and as Hamilton headed through the final turns it was Hamilton to the top and then Bottas, up by nearly half a second. Ricciardo took P3 with Verstappen on his Hards just a tenth off. With just Ferrari left to go, Gasly and Sainz were potentially at risk, as they were in P9 and P10. Hulkenberg in P11 was explained by his going full rally during his lap and as the Ferrari's dropped the hammer the rest of the runners were in and getting themselves ready for the final tilt at the hallowed grounds of Q3. Leclerc to P4, Vettel to P11 and Russell, out on the Soft tyre was having a single go at an empty track and 5 minutes on the clock.

P12 for Russell then as Norris led the way onto the track. Mercedes had chucked their drivers out on the Softs, suggesting they would be running them in Q3, and Vettel as well was on the Softs... intriguing. AS they completed their outlaps it was Vettel, Russell, Sainz, Hulkenberg and Grosjean on the outside looking in, with Hulkenberg quite likely to put Gasly out and Verstappen sat firmly in the pits.

And it was Hulkenberg, painting the board purple and going P2 and splitting the Mercedes. Next up it was Gasly, going P4 and putting Ocon into the hotseat. Ocon improved but was still put out as Gasly had stuck the knife firmly in. Thus it was Ocon, Vettel, Sainz, Grosjean and Russell going no further, off in search of some gin to drown their sorrow as the rest turned it around for the ultimate palmares of Q3.

Norris took the honours, first out on the Soft tyre and according to the timing app, it was Ricciardo, Albon, and Verstapen on the Medium tyre with the rest on Softs... Again, interesting choices by the teams.

As got underway it was Hamilton, owning the first sector, Bottas the second and then the decider, and it was Hamilton again, winning the battle of the bankers with a 1:25.284, just a tenth off his teammate. Ricciardo took P3 with his Mediums, then Hulkenberg and and Verstappen, in a bit of an underwhelming lap. Albon was just behind him, 0.3 seconds off on the same tyre, which will improve his mood a bit and then Leclerc, Stroll, Gasly and Norris. 5 minutes to go and it was Red Bull looking for answers as they turned it around for their final shot at glory...

This time around it was Mercedes leading the way and out on the Medium tyre, kray kray I know, as Verstappen had switched to the Softs along with Albon as the battle of the tyre strategies continued. And slower in Sector 1 for both Mercedes and then it was Bottas, lighting up the middle sector, and purpling the board as he got on top of the different compound. Sector 3 and now both drivers were improving and Hamilton took the third sector purple, but not by enough as Bottas took pole position. The battle behind was joined as well, with Hulkenberg finally getting it all together and going P3, Verstappen just behind, dropping Ricciardo to P5. Stroll was next, 0.3 seconds off his teammate, followed by Gasly, Leclerc, Albon and Norris.

Well, Well, Well. Quite the tale of two cities for all the teams save Mercedes (all good) and Alfa (all bad). Hulk good and Stroll bad, Verstappen good and Albon bad, Ricciardo good and Ocon bad, Gasly good and Kvyat bad, Leclerc good and Vettel bad, Norris good and Sainz bad, Grosjean good and Magnussen bad, Russell good and Latifi bad was the way it went, attesting to the difficulty of getting it all right all the time perhaps.

Bottas on pole, Hulkenberg P3 and Verstappen on the Hards for tomorrow's start. Cooler temps tomorrow along with a possibility of a morning rain could lead to some interesting early laps, and given the very short shelf life of the Mediums it is quite possible that the Hard tyre runners, which will be pretty much Verstappen and anyone P11 and below, will wreak utter havoc as the faster Medium tyre runners will struggle to clear their pit window before they start bleeding massive chunks of time. And no race can be entirely boring when Hamilton is not leading and given last week's race, it's quite possible that all the fireworks will be at the end since Hamilton's tyre management should give him an edge, though one that will likely be blunted by having to run in dirty air for some chunk of the race...well assuming it doesn't all change at the start. Hulkenberg in P3 will be quite the variable as well, that far up the grid for the first time in, well, a rather long time, a new and unusual place for him to start and adding insult to injury, a three spot penalty for Ocon will do him no favours whatsoever... The midfield will be it's usual chaotic tempest and, as per last week, no doubt a Safety Car or two to liven things up a bit....