Matt 'Trumpets' Ragsdale gives us the lowdown of the events that unfolded in qualifying for the Spanish GP. 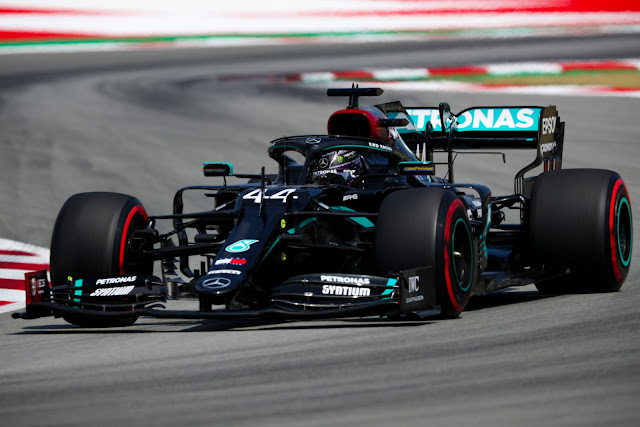 The glorious sun lofted overhead, cutting through the haze of the Catalan afternoon as variable winds whistled through the paddock as the teams readied themselves for the rigors of qualifying. Overnight, it would seem tyre pressures were bumped up (0.5 psi fronts and 0.7 psi rears if Amazon was to be believed) although judging by the gaps in FP3 it seemed unlikely to have affected Mercedes 1 lap pace.

After a remarkable showing in FP2, a power unit issue caused HAAS to replace Grosjean's engine and the team were forced to break curfew due to a leak once the installation was complete. Unfortunately, the work seemed to return the car to earth and it looked to be a battle with the bottom again on the menu for the team, which seems primarily to be in money saving mode these days, relying on taking advantage of other's misfortunes to move themselves forward.

Also having a busy time of it was the pitbox of Ocon, after he drove his Renault into the inside wall of T3 avoiding an unexpectedly harvesting Magnussen. Renault were forced to rebuild his front end in the fairly tight interval between the two sessions, but it was a challenge by no means insurmountable as they had him ready to go well before the the lights went green... The big talking point amongst the commentariat was traffic and the insanely slow cool down laps being run by the drivers, which promised sheer chaos as the laptimes were finally set to count for real.

Green Light!! Latifi and Russell were first out of the gate and aside from that duo, it was crickets for the rest of the teams. Left alone to settle their intrateam rivalry, Latifi rocked in with a 1:19.231, 0.3 seconds up on Russell so first blood to the rookie then. Verstappen was next out, around the 13 minute mark, then the pair of Mercedes, Norris and Leclerc. The dam had clearly burst and subsequently Kvyat, Vettel, Stroll, Perez and Gasly joined the fun and finally Sainz rocked out just behind Verstappen who was well on his way to his first hotlap.

The Red Bull driver chucked purples up across the board, though his first sector seemed conservative, perhaps to preserve tyres for the all important third sector. 1:17.451 was his time as Bottas was the next up and only 0.002 seconds up. Hanmilton, next up, put things into perspective with a 1:17.037 as all the runners were on track and it was about to get messy.

Stroll went P2 and split the Mercedes and then Perez went even faster, less than a tenth of Hamilton and ahead of his teammate. Leclerc P7, Vettel P11 with Sainz P6. On his cool down lap Verstappen complained of the car feeling strange and Albon went P9, just ahead of Norris. Ricciardo was next up, and he bettered Albon as his teammate Ocon went P13 with his newly rebuilt car. Russell, with his second go, went P15 and with 6 minutes left the track emptied as the teams turned it round for their last chance at the glories of Q2.

Grosjean, Raikkonen, Magnussen, Latifi and Giovinazzi were on the outside looking in and there was an incident between Magnussen and Kvyat that was being investigated, though that was being left till after the session.

Latifi and Ocon led the way for the last chance brigade and true to prediction a massive traffic jam at the exit....Racing Point decided to stay home but the rest were out to play. Latifi was off then, trailed at a respectful distance by Ocon. Bottas and Ricciardo were next and it was P18 for Latifi and P10 for Ocon. Bottas split the Racing Points and Ricciardo stayed P9 as Albon went P6. Vettel was down to P13 then P14 before he hit the line to go P9. P16 for Grosjean as it was Raikkonen going P15 and then his teammate sent him down one spot to P17. Notable was Albon going just 0.2 seconds slower than Verstappen, a nice early marker for the youngster.

Off in search of some tapas to fill the empty void in their soul then were Magnussen, Grosjean, Russell, Latifi and Giovinazzi as the rest turned it around for the glories of Q2.

The Mercedes pair, Bottas leading Hamilton, set off first in Q2, Bottas going significantly quicker than Hamilton on the outlap at least in the first sector. As they rocked onto their outlap, on the Soft tyre worth noting, it was Bottas winning the first sector, Hamilton the second and then Hamilton taking the third and decisive sector with an extraordinary 1:16.013. Albon was next across the line, P3 for a moment till Verstappen pushed him down, half a second off Hamilton and sadly, for Albon nearly 0.6 seconds faster than his teammate. Sainz, Perez, Stroll and Norris all then inserted themselves into that gap as it was the pair of Renaults, Ricciardo ahead of Ocon taking the last of the top 10 spots. This left just the Ferraris to go and it was Leclerc, putting Ocon out by going P5 and then Vettel, splitting them and going P11.

Vettel, Ocon, Gasly, Kvyat and Raikkonen had it all to do then as the teams turned it around for their last chance at the hallowed ground of Q3. 3 minutes to go and it was Perez, leading the way, again all on the Soft tyre.

As they got themselves sorted, it looked to be, well, Leclerc, shoving his way to the front, then Perez, Albon, Norris, Sainz, Ricciardo, Ocon, Kvyat, Vettel, then Gasly and Raikkonen, resembling the BQE at 5 PM rush hour as they lined up and slowed to give themselves a sufficient gap to the runner ahead. Leclerc, no improvement and then Perez to P5. Albon to P8 and Norris P9. Ricciardo improved slightly but stayed P10 till Kvyat put him out. Vettel returned the favor and just as you thought he might do it, Gasly went P5 and stuck the knife in deep, putting the Ferrari driver out yet again.

So Vettel, Kvyat, Ricciardo, Raikkonen (oddly on the Medium tyre) and Ocon going no further, off in search of some port to soothe their wounds as the rest turned iot round for the ultimate palmares of Q3.

Perez and Stroll led the way into the final session, followed by Bottas, Albon, Sainz and Hamilton. Leclerc and Verstappen trailed by a bit and then Gasly hit the track, as the Racing Points were beginning to wind it up through the final sector to have their first go. Perez got the better of his teammate, with Norris falling just behind as Bottas went to the top, only to be displaced by Hamilton, into the 15s with a 1:15.584. Verstappen went P3, ahead of Perez and Albon took a meager P8(on used tyres to be fair) with Gasly P10.

As they rolled into the pitlane, the track grew quiet as the race engineers conferred with their drivers, trying to wring the last ounce of performance for their last go at the ultimate Saturday prize...

Leclerc was first off, followed by Albon then the Mercedes, again Bottas leading Hamilton. Stroll, Norris and Gasly were next then Perez, Sainz and Verstappen. In the battle for pole, it was Bottas leading the way, as Hamilton was not improving and as Bottas was eking out the gains across the lap it looked there for the taking till the final few corners and it was just not quite enough, with the Finn 0.059 seconds back when all was said and done. Verstappen, Perez, Stroll all saw no improvement in position and it was just Sainz, jumping his teammate for P7 and Albon, rocking up to P6 who got the job done as the track looked to be going away a bit as the shadows lengthened and the wind shifted.


Huge job by Albon as Racing Point has generally been a bit weaker on race pace, especially on the hotter tracks, leaving him well positioned to actually play a role in Red Bull's strategy if he can get round them quickly enough at the start. The Mclarens have generally struggled when the car is full of fuel so that offers Ferrari a chance to move Leclerc forward and try and find the same bubble that Ferrari have managed to hit with him in the last races. The real action will be in the ever volatile midfield, with both Renaults and no doubt Vettel likely to start on the Medium tyre and run long, a strategy that has worked out well in the past especially as compared to the Soft, the Medium looked to be a better race tyre in FP2. One stop versus two stop is also on the menu, especially for those starting on the Mediums...

Though Hamilton generally has had superior tyre management, and thus should be tipped for victory especially at a hot track renowned for munching front left tyres, it is a long run to T1 and in the chaos of the first lap, many a prediction has come to wrack and ruin. Red Bull's race pace was not far away from the Mercedes in FP2 and it's never a good idea to count them out on race day, as they remain unafraid to roll the dice on lower probability but higher payout strategies. A strategic battle looms then, with tyre management, track temps and the vagaries of wind direction set to play a large part...
Tagged
Newer Post Older Post