As much of the traffic to my site atthe moment centres around the Lotus DDRS/Passive F Duct system Ithought for my pre Spa Musings I'd talk a little about thepast iterations of such a system.

We can go as far back as 2008/09 to seethe first signs of these devices emerging with both McLaren and Toyota fielding passive ducting on their cars for more co-efficient designs.

The designs of all the systems have always centred around the premise of the central 15cm of the wing being free to allow holes. The Toyota and McLaren designs of 08/09 featured such holes in the15cm region which would increase downforce in the central portion of the wing by injecting airflow below the normal wing gaps.

As we can see from the pictures below of the McLaren from behind at Monaco in 09 the slot gap projects the same width on the rear as it does at the frontal collection area. McLaren angled the wing fences on the wing in order to augment the airflow across the wing. The slot gap delays the onset of boundary layer separation caused by the wing being run at additional angle of attack, resulting in a downforce gain with the slot acting as a third slot gap separating the wing plane. The rear wing planes angle of attack and the size of the hole in the wing are crucial at higher speed. As the speed increases the air provided by the hole gets to a point where a blockage occurs, (ie no more air can be vented) this causes the boundary layer to separate and thus the wing stalls.
In aerospace the term 'stall' is used in a different context to the way the F1 fraternity use it. In terms of an F1 wing a stall occurs when the angle of attack is too large (same as aerospace) whereas when an airplane wing stalls, lift is lost due to the critical AoA being exceeded and the flow separates creating drag.  This is where the major confusion occurs as principally when an F1 wing stalls just like an airplane it creates drag but essentially there is a resultant loss of downforce.   The loss of downforce makes the wing less efficient and so cancels out the drag further giving a top speed advantage of between 5-10km/h dependent on the system. 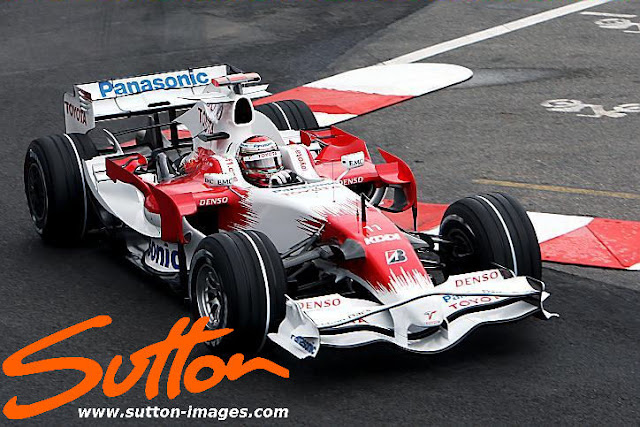 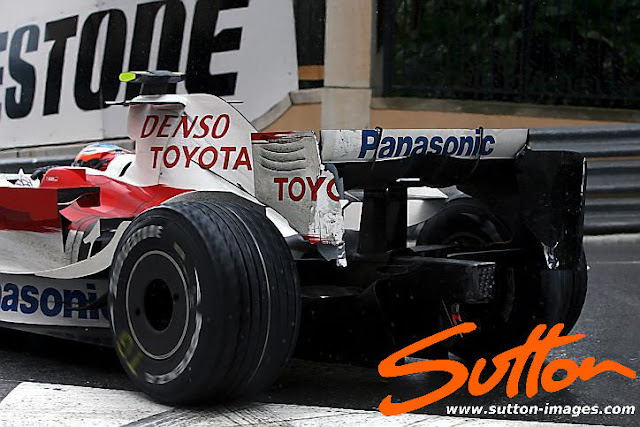 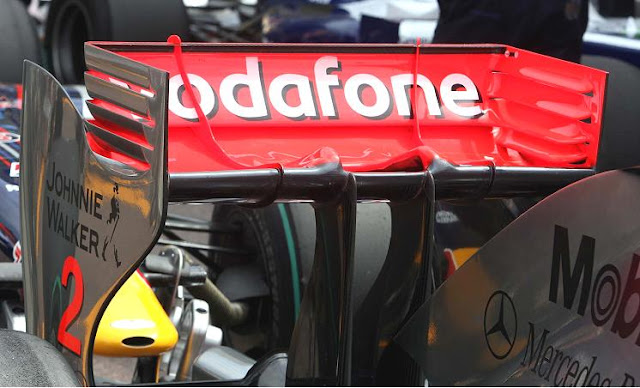 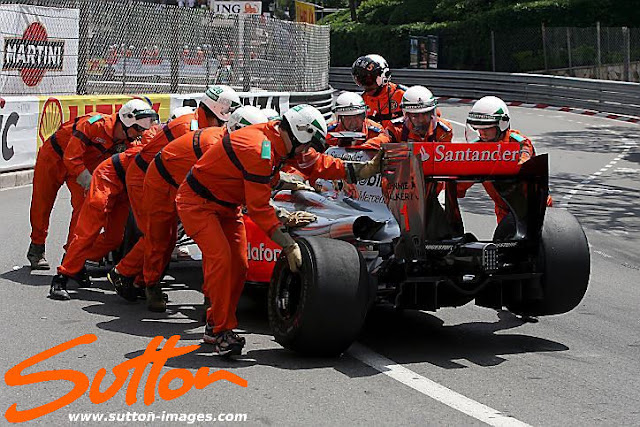 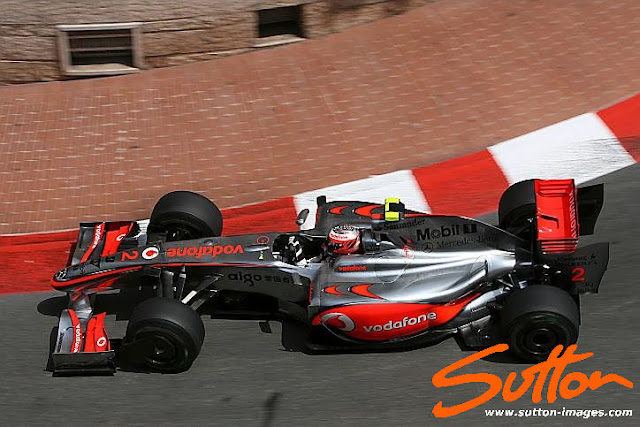 Above: McLaren MP4-24 - Monaco 2009 Shows the passive duct used by McLaren which was the genesis for the 2010 driver controlled F Duct

It is widely accepted that drag reduction is the desired effect of both passive and F ducts but it is entirely plausible downforce is also gained as a result of careful management of the rear wings angle of attack (AoA).

The F Duct systems of 2010 (Once again with McLaren at the fore, using their 2009 experience) were a development of this principle. Adding the driver as the controlling influence allowed the team to make the slots on the rear of the wing  larger meaning they could gain more downforce from an aggressive wing AoA whilst blowing the wing. When the driver covered the hole in the cockpit the airflow to the rear wing would cease and drag would be reduced. 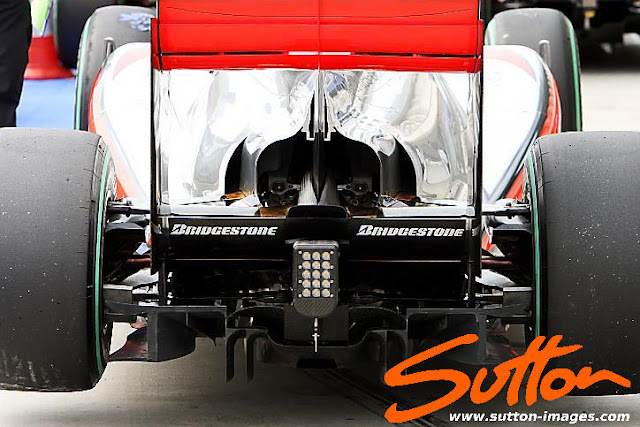 The FIA changed the rules in 2011 to stop the F Duct systems by placing a minimum radius of 100mm on the wing planes, this stops the teams from adding the slots that ran almost the length of the wing planes but the 15cm central zone still remains open to interpretation. Obviously with the allowance of DRS the FIA assumed that teams would no longer pursue this method of downforce enhancement / drag reduction. However the system that Lotus have been testing since Hockenheim uses these exact principles.

With the 100mm Radius rule stopping the placement of elongated blow holes on the rear of the planes it would appear that only the original straight through style duct would be viable in order to create the F Duct effect (Like the Toyota and McLaren versions shown above).  However smartly the Lotus system takes cues from the original F Duct concepts but rather than using holes/slots in the wing planes these are placed in the pylon that connects the engine cover to the Rear Wing. The holes blow tangentially from the pylon across the wing span.

Blowing the air across the wing plane reduces the boundary layer which in combination with the steep angle of attack of the wing creates more downforce. At a certain threshold the blowholes reach a point where they can't produce enough air to stop the wing from stalling and so drag is reduced.  Careful management of the wing AoA and the size of the pylon blow holes will decide the speed threshold at which the wing loses downforce and drag. 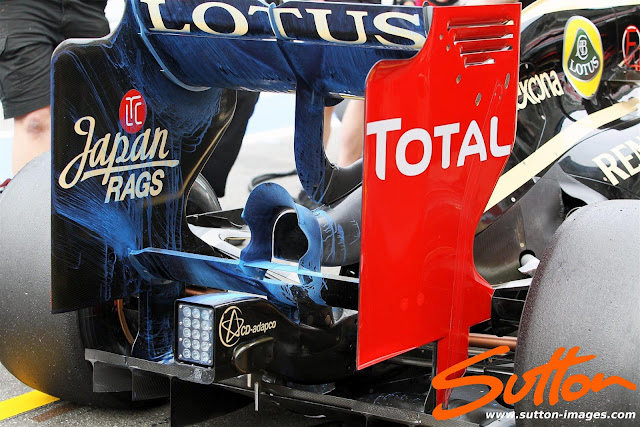 Above: Lotus E20 - Hockenheim Showing the rear wing painted with Flo-Viz, due to the Flo-Viz you can see in the central section the airflow separating 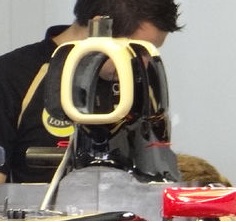 As I have talked about previously the 'Ears' are used as a way of recovering airflow when off throttle.  The main airbox entry blocks when off throttle and the air that usually tumbles over the side and disturbs the airflow heading towards the rear wing now enters the ear ducts.  This obviously helps by keeping the system in loop during the Braking and Turning phases generating more downforce.

Lotus placed their exhausts in a more aerodynamically neutral position than say McLaren this season and as such have a more consistent aerodynamic platform.  Realising that without EBD the downforce level is inconsistent the team have decided to achieve downforce in a more consistent way via the Rear Wing (Including the Beam Wing) and airflow en mass over the Diffuser.
The addition of the pylon for the passive F Duct required the team to have the engine cover finish further back toward the wing and so a funnel now presents itself at the Monkey Seat / Beam Wing. This Funnel and Monkey Seat act together acting as a mini diffuser atop of the beam wing creating more downforce.

In order to see how Lotus (nee Renault) came up with their current system lets quickly look back at their 2010 efforts.  The team actually used two variants of the rear wing drag reduction system back in 2010, they ran the passive style system that McLaren used in 09 and then a full blown F Duct system. Their full blown system used similar Airbox ears we now see on the LotusE20. The pylon being used as a means of carrying the air to the under side of the Rear Wing also featured in the original 2010 designs but this was structural in the 2010 versions. This however must have given the team a head start in CFD and Wind Tunnel in terms of modeling the structures involved. 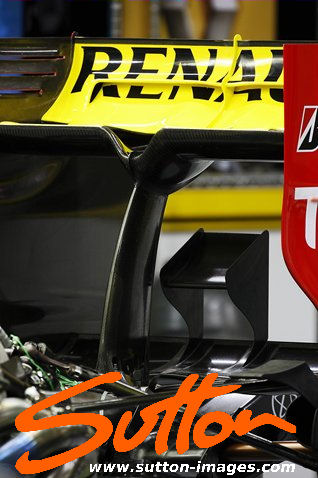 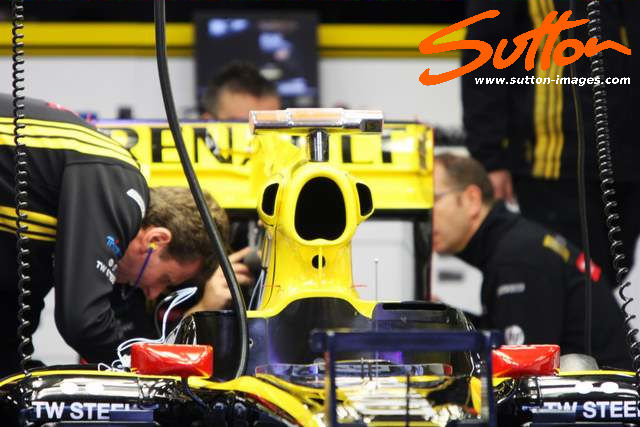 Above: Renault R30 - 2010 Showing the similar Airbox 'Ears' being used currently on the Lotus E20 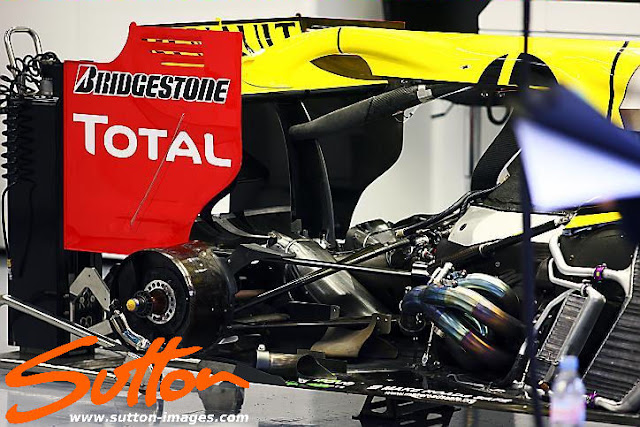 Something to think about?....

Before the FIA increased deflection tests and then latterly mandated the size of the slot gap teams intentionally designed the top flap to flex under load closing the gap between it and the main plane. This had the desired effect of stalling the wing and reducing downforce/drag as the AoA of both wings combined became too large.
As a parting thought on this subject I propose the use of a trailing edge Gurney that although dimensionally would be within the regulations (The Latter part of article 3.10.1: Once this section is defined, ‘gurney’ type trim tabs may be fitted to the trailing edge. When measured in any longitudinal cross section no dimension of any such trim tab may exceed 20mm.) would be different to the perceived Rear Wing 'Gurney' 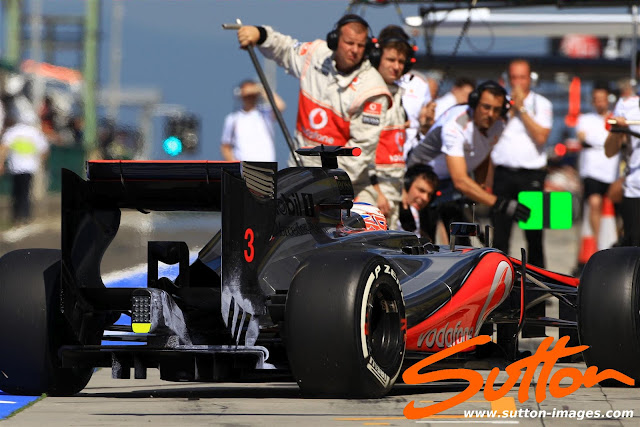 Above: McLaren introduced a Red Bull style Diffuser gurney in Hungary in order to aid the generation of downforce


If we take the current design of the Red Bull, Ferrari & McLaren diffuser gurneys as inspiration these Gurneys act as a method of increasing downforce through airflow injection.  Using a similar design approach at the trailing edge of the rear wing flap could produce more downforce .  Similarly it could be used in conjunction with the flap to stall the main plane by the use of flex.  The Gurney doesn't have the same deflection tests as the flap and main plane and so could be designed so that the gap is open to generate downforce and closes at higher speeds.    The 'Gurney' has no real restrictions placed on it's design and so could have a small or large chord as long as it doesn't extend beyond the 20mm mandated.  The height of the gurney and the slot gap left between it and the flap could be adjusted in order to suit the characteristics of the downforce/drag reduction required.
As usual these are my thoughts and should be taken with a pinch of salt as I haven't got access to CFD etc in order to access the general principles and most importantly the effects of DRS when the top flap is open may make the idea mute.  In my eyes the Gurney could offer a source of both additional downforce and drag reduction by lending principles from former designs.