Wet weather in Spa has put pay to a lot of the running the teams were hoping to do in order to evaluate new parts.

Mercedes bought a surprise package to Spa in the form of a drag reduction device much like the lauded Lotus device.

Due to the weather conditions getting shots of the WO3 in action were slim but as we can see from the images below the device mimics the effect Lotus are trying to achieve. 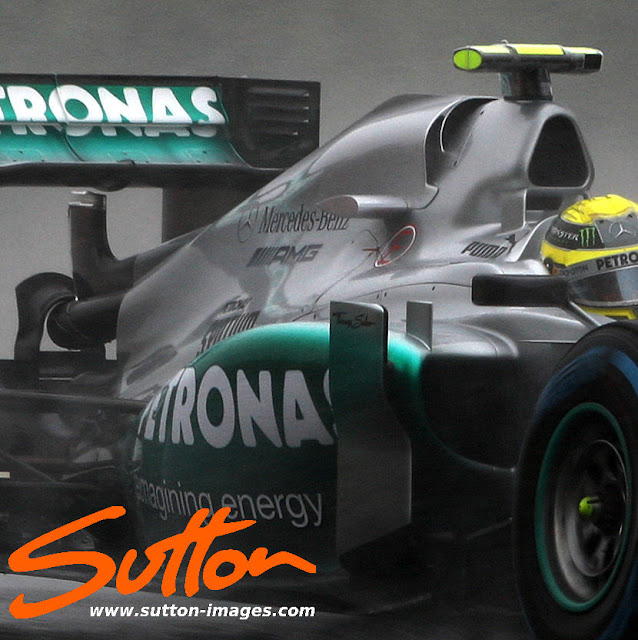 Just like Lotus an adaption to the engine cover has been placed around the airbox in order to recapture air along with any being spilt off throttle (This occurs when the opening can no longer receive anymore air and so the airflow tumbles back out and over the sides of the airbox)
Airbox Spillage being captured by these ducts also helps tidy up the airflow that may become turbulant and affect the Rear Wings effectiveness.

The air that passes through these ducts is then sent down the engine cover before being diverted up the Periscope to the Rear Wing.  Unlike the Lotus version Mercedes periscope stops short of the underside of the Rear Wing.  (It's unclear at present if this is part of the design process or a different Rear Wing will be used in conjunction with the device) 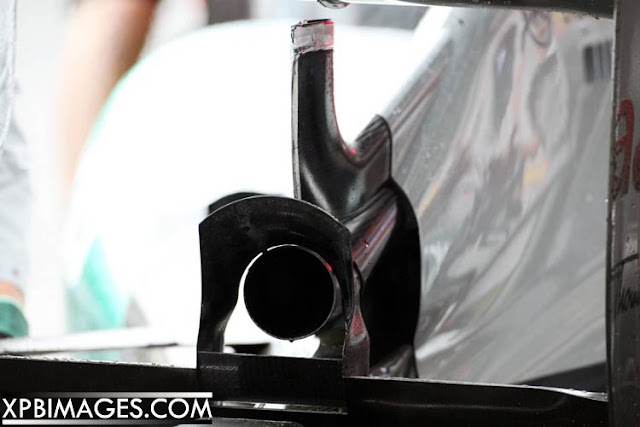 As the periscope was taped up (Due to weather) it's unclear how big or the orientation of the blow holes but what is clear is, if the periscope does indeed drop short of the Rear Wing the blowing effect may cover an increased area than the Lotus variant.


As I explained in my previous article the possibilities on offer with these devices are large and can be used to create additional downforce aswell as for drag reduction: http://somersf1.blogspot.co.uk/2012/08/bank-holiday-monday-musings-rear-wing.html

In short if I'm right by being able to blow the rear wing via these pylon holes it allows for the Rear Wing to run at a steeper angle of attack (AoA) this is because the holes decrease the boundary layer build up and so increase downforce.  As speed exponentionally increases the holes get to a point whereby they can't provide enough airflow for the wings AoA and so the wing stalls (Critical Angle / CL Max) Downforce is reduced and so is the drag.  This allows for the car to ultimately attain a higher speed (I'd predict 5-10KMH)

Mercedes will continue to use DDRS in tandem with this device thus aiding with further drag reduction whilst DRS is unavailable.

The mainstream media still seem intent on calling these devices DDRS (Double DRS) or Super DRS as I first coined it.  For me that is a name that should only be used for the original Mercedes system as it requires the use of DRS for it's secondary usage to come into play.

The Lotus team simply call theirs the 'Device' so perhaps we should by using the acronym DRD? Drag Reduction Device?