Having reported briefly on the subject yesterday both Red Bull and Ferrari lodged a protest against Mercedes before the Monaco GP commenced.

Post Race, members of Ferrari, Red Bull, Mercedes & Pirelli were called in front of the stewards in an attempt to resolve the situation.  As I said yesterday in reality it's a problem that really shouldn't be raised at a race weekend but with such high media coverage available to Red Bull and Ferrari the prospect of causing a furore is an opportunity best not missed.

So what do we know?

Article 22 of the Sporting Regulations prohibits in-season testing with the exception of 4 days of straightline or constant radius tests and 8 promotional events (Limited to promotional tyres and 100KMS per event).  The other option is the three day young driver test but must be carried out on a date and track approved by the FIA.

Pirelli approached the FIA to ascertain if they could invoke a clause in the contract between the two parties to test a contemporary F1 car in order to aid in tyre development.

The FIA agreed to Pirelli's requests, with the understanding that all 11 teams were given the opportunity to complete the same test.  They also requested that Pirelli's team conduct the test, using the teams cars to establish some level of parity.

Pirelli state they offered the test to teams others than Mercedes but have not explicitly confirmed it was offered to all teams. According to Pirelli this is not the first time the tyre manufacturer have made such an offer either.

The test took place in the week following the Barcelona GP and was conducted using a 2013 Mercedes AMG W04.

What don't we know?

Who was driving the Mercedes W04 during the tests? the use of any Mercedes drivers or test drivers being ruled out by the FIA in their requirements to holding the tests.

What Tyres were tested? Ross Brawn told us his team weren't made aware what tyres were being tested and only had the codes made available to them.  This means that Pirelli could have been testing anything from 2011,2012,2013 or any number of combinations of these and plausibly prototype tyres for the rest of this season and/or beyond.

Corners of the media have questioned if Mercedes took the opportunity to test development parts or setup whilst conducting the tests.  In an interview with Sky Sports however, Ross Brawn stated the team didn't conduct any of their own tests but instead completed a continuous program outlined by Pirelli.

We can safely assume that the FIA weren't present at the test as they continue to deny knowledge that it took place.

Ferrari have reportedly conducted a similar test after Bahrain (Although the circuit it was conducted at also remains a mystery) Ferrari however made their 2011 challenger (F150) available to Pirelli to conduct the test.

The use of Ferrari's F150 would certainly assist in the correlation between it and their own test car (Renault R30 from the previous year).  What it fails to do though is help Pirelli establish a connection to their modern counterparts.  I'd be interested to know what specification F150 they ran too, with Blown Diffuser's and Off Throttle Blowing coming to prominence in 2010/11 their own test car doesn't sport a Blown Diffuser or the necessity to blow Off Throttle. The F150 may have given Pirelli more of an inkling into the downforce levels and aero issues associated with this and the 'Coanda' style exhausts currently being used in Formula One.

Having therefore established the aerodynamic inefficiencies of using their own R30 when correlated against the Ferrari F150 (Discussed further in my previous article: Pirelli - Are they really to blame?) it would appear Pirelli sought to establish a direct link by virtue of using a 2013 car.  Afterall everyone is looking to Pirelli to supply a tyre that suits their requirements, but without the necessary tools with which to do so.

EDIT - My Twitter pal @PiusGasso has provided some images of the F150 (2011 Challenger) being used at the reported Ferrari tyre test. 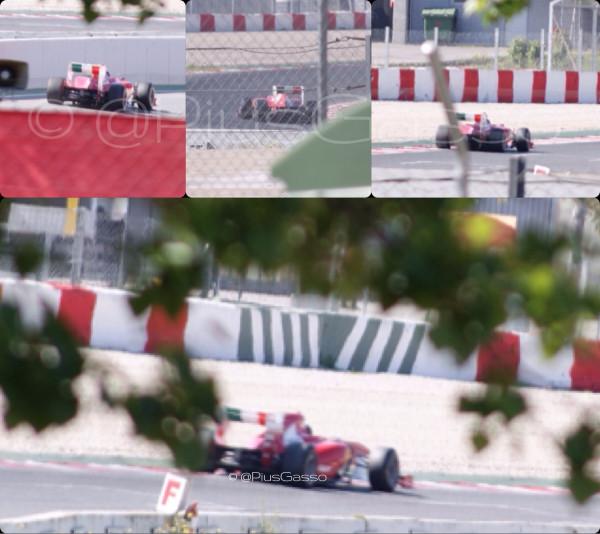 So if other teams were invited to test, why didn't they?

Data: The holy grail in modern F1, tests carried out by Pirelli in a controlled environment would lead to a data set that if made available to the teams could lead to disastrous consequences.  I'm not saying that Pirelli would allow this data to be made available in the public domain but it doesn't stop it being leaked and I'd imagine some of the teams had this in mind when they declined.

Where do I see things going from here?

The FIA's note to the media: http://www.fia.com/2013-monaco-grand-prix-note-media all but confirms the issue will be raised with the WMSC.  At the end of this no-one will come out of it a winner, if they decide to side with Pirelli/Mercedes the other teams will remain aggrieved, believing Mercedes have gained an advantage for the rest of this season.  If Mercedes are found to be guilty of deliberately circumnavigating the regulations numerous penalties could be implemented.  The result of yesterday's race however will always remain, the points issued however could be revoked.  Just as an exclusion from forthcoming races and/or exclusion from the Championship could ensue.  It's the severity at which the council find the rule break as to how a punishment is levied but they must also be careful (in my opinion) not to go to far.  Financial punishment to a company like Mercedes however would not sit well with the other teams and so I do see a penalty, if forthcoming being a point deduction or expulsion.

Pirelli also find themselves caught in the crossfire once more and whilst the tyre manufacturer are still crossing the T's and dotting the I's on a new contract this further puts their decision to continue supporting Formula One in jeopardy.

The problems faced by any tyre manufacturer considering Formula One as a series to promote their product is relevance (the reason Bridgstone quit), helping to aid the show (the reason Pirelli got the current gig) and image (the reason Michelin withdrew when we had the Indianapolis debacle).

Pirelli have struggled this year with the need to rectify certain design issues with their 2012 tyres whilst balancing the requirements to produce a tyre that will result in a 2 to 3 stop strategy.  My article previously mentioned above shows the problems the teams have had with the aerodynamics of the 2013 tyres and moreover the scale model tyres given to the teams by Pirelli.

Pirelli have always been pretty vocal about their need for a representative car in order to test their tyres but in reality with how fast F1 moves with upgrades available at every race at GP's the only effective way for this to happen is for them to run their own car development program ( I know myself and ScarbsF1 are free if you're listening Pirelli ;) ) or use a spectrum of current teams cars.

2014 is going to be a pivotal year for F1 with a shakeup in terms of both Aero and Powerplants, causing the teams headaches already.  Add to this the potential for Pirelli or any other manufacturer brave enough to enter F1 the challenge of designing a tyre with a Goldielocks syndrome (Not too aggressive or too conservative).

All I know is that someone will be unhappy, whatever the outcome and parity cannot be restored even if all the teams now went and completed a 3 day test at the Circuit de Catalunya with the same program that the Mercedes team ran.