I've often wondered firstly how it would look but secondly how much it would constrain my analysis if I were to be restricted to print format.  With this in mind and as a handy reference guide to 2014 I present my article in A3 sizing (ie how it would be presented over 2 pages in a glossy magazine) 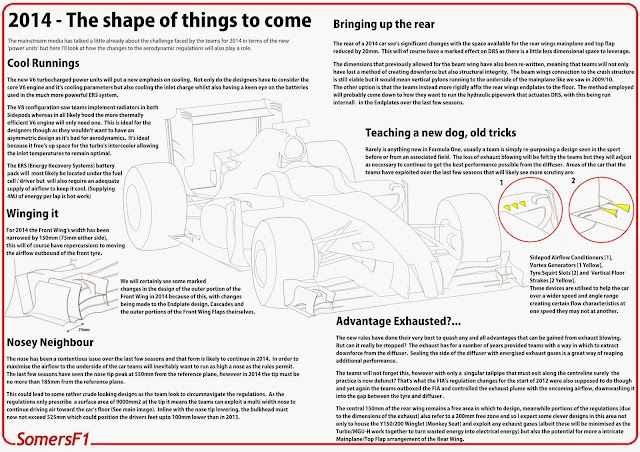 Click the image for full size which makes for a handy print off.....

As a translation isn't available for the embedded image the following is the piece in blog format:


The new V6 turbocharged power units will put a new emphasis on cooling. Not only do the designers have
to consider the core V6 engine and it's cooling parameters but also cooling the inlet charge whilst also having a keen eye on the batteries used in the much more powerful ERS system.

The V8 configuration saw teams implement radiators in both Sidepods whereas in all likely hood the more
thermally efficient V6 engine will only need one. This is ideal for the designers though as they wouldn't
want to have an asymmetric design as it's bad for aerodynamics. It's ideal because it free's up space for
the turbo's intercooler allowing the inlet temperatures to remain optimal.

The ERS (Energy Recovery Systems) battery pack will most likely be located under the fuel cell / driver but
will also require an adequate supply of airflow to keep it cool. (Supplying 4MJ of energy per lap is hot
work) 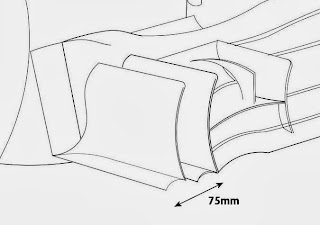 The nose has been a contentious issue over the last few seasons already and 2014 will likely be another. In order to maximise the airflow to the underside of the car teams will inevitably want to run as high a nose tip as the rules permit. The last few seasons have seen the nose tip peak at 550mm from the reference plane,
however in 2014 the tip must be no more than 185mm from the reference plane.

This could lead to some rather crude looking designs as the teams look to circumnavigate the regulations. The FIA made these changes in light of safety but believed aesthetically we'd end up with a nose similar to the BrawnGP BGP001. As the regulations only prescribe a surface area of 9000mm2 at the tip it means the
teams can exploit a multi width nose to continue driving air toward the car's floor.


Bringing up the rear

The rear of a 2014 car see's significant changes with the space available for the rear wings mainplane and top flap reduced by 20mm.  The dimensions that previously allowed for the beam wing have also been re-written, meaning that teams will not only have lost a method of creating downforce but also structural integrity. The beam wings connection to the crash structure is still viable but it would mean vertical pylons running to the underside of the mainplane like we saw in 2009/10.
The other option is that the teams instead more rigidly affix the rear wings endplates to the floor.  The method employed will probably come down to how they want to run the hydraulic pipework that actuates DRS, with this being run internally in Endplates over the last few seasons.

The new rules have done their very best to quash any and all advantage that can be gained from exhaust blowing.  But can it really be stopped? The exhaust has for a number of years provided teams with a way in which to extract downforce from the diffuser. Sealing the side of the diffuser with energised exhaust gases is a great way of reaping additional performance.

The teams will not forget this, however with only a singular tailpipe that must exit along the centreline surely
the practice is now defunct? That's what the FIA's regulation changes for the start of 2012 were also  supposed to do though and yet again the teams outboxed the FIA and controlled the exhaust plume
with the oncoming airflow, downwashing it into the gap between the tyre and diffuser.

The central 150mm of the rear wing remains a free area in which to design, meanwhile portions of the regulations due to the dimensions of the exhaust also refer to a 200mm free zone and so I expect some clever designs in this area not only to house the Y150/200 Winglet (Monkey Seat) and exploit any exhaust gases (albeit these will be minimised as the Turbo/MGU-H work together to turn wasted energy into electrical energy) but also the potential for more a intricate Mainplane/Top Flap arrangement of the Rear Wing. 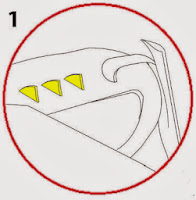 Rarely is anything new in Formula One, usually a team is simply re-purposing a design seen in the sport before or from an associated field. The loss of exhaust blowing will be felt by the teams but they will adjust as necessary to continue to get the best performance possible from the diffuser. Areas of the car that the teams have exploited over the last few seasons that will likely see more scrutiny are: 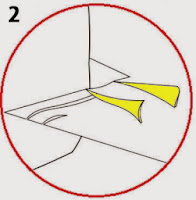 Sidepod Airflow Conditioners [1 Yellow], Vortex Generators [1], Vertical Floor Strakes [2 Yellow] and Tyre Squirt Slots [4]. These devices are utilsed to help the car over a wider speed and angle range creating certain flow characteristics at one speed they may not at another. Without moveable aerodynamics the designers are forced into giving up peak downforce for a more manageable, balanced experience for the driver. I expect these areas to be where we will see the most development over the first half of 2014 as the teams grapple with the new regulations and tyre construction.

For a more in depth look at the 2014 regulations along with a few of the 'loopholes' available to the teams don't forget my ongoing series: Looking Ahead to 2014