Throughout this series of articles I've looked forward to writing this section the most. The regulations that were bought in, in 2009 looked to reduce the level of downforce the teams were able to achieve from the rear end. Of course the teams found ways around this and exploited the use of the exhaust plume to both energize airflow and seal the diffuser.

The diffuser still remains an area of focus for aerodynamacists as they know if they can extract performance here they will be able to change their approach further up the car.  Dimensionally the regulations for the Diffuser for 2014 haven't changed, but without the exhaust energy it will certainly be more difficult to extract performance from it.

That of course doesn't make it impossible, 2009 proves that as teams adopted the periscope style positioning.  Although of course the use of DDD's exploited the rules allowing more height in the central portion of the Diffuser in 09/10. 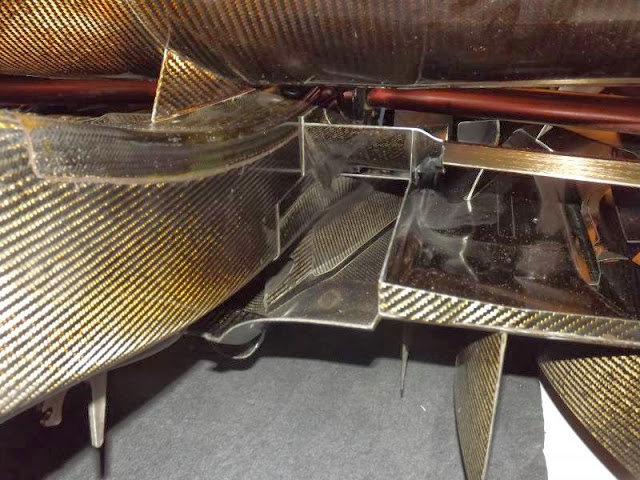 The loss of the beam wing however will be more of a significant loss with it not only providing structural rigidity, but also an aero link between the diffuser and the rest of the rear wing. 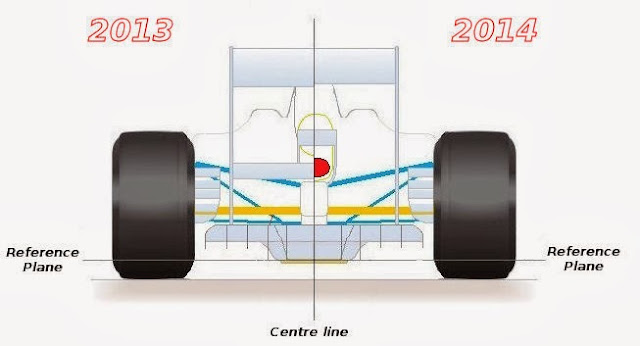 If we take a look at the quick diagram I produced above we can see the differences at hand: Loss of the beam wing, increase in free space difference between the reference plan and the underside of the rear wing mainplane (increased from 730mm to 750mm), placement of the exhaust along the cars centreline (in red) and the increase of 25mm of the design free region outwardly from the centreline (previously Y75 but will become Y100, increasing the width of bodywork that can be placed here such as the Monkey Seat or Wing support pylons).

Starting at the top and working down, the loss of 20mm in height of the Rear Wing's flaps might not seem drastic and to be honest it's not.  However it does have some consequences with the obvious being a loss of surface area and therefore a reduction in both downforce (more important) and drag.  If you didn't realise already the mainplane must always be larger than the top flap, something the FIA utilise to stop teams creating a much wider split in terms of strategy for each circuit configuration.  Furthermore this 20mm has an effect on DRS, as the opening remains at 50mm rather than being increased to 65mm as the original draft of the rules intended.  For those that don't like DRS you'll be glad to know that the artificial overtaking aids ability is therefore slightly more impaired and by that I mean the delta by which DRS can be utlised.  Those not versed in looking for the nuance differences at each circuit will not notice that the mainplane and top flaps change between each circuit.  This is done to maximise the downforce generated, drag reduction and DRS ability for the given circuit based on the rest of the cars package. * It appears that I had somehow been working from an interim set of regulations when writing this and the aperture has been increased to 65mm


Rear Wing Endplates were an area that were an area of development for teams in 2013 and moreover something that could be first found on the Williams FW34 coincidentally at in Barcelona 2012.  They then found their way onto the MR-01 and VJM05 as part of the Marussia and Force India upgrade packages respectively.  I'm talking about the leading edge tyre wake slots, these slots allow pressure/airflow to move from one side of the Endplate to the other. 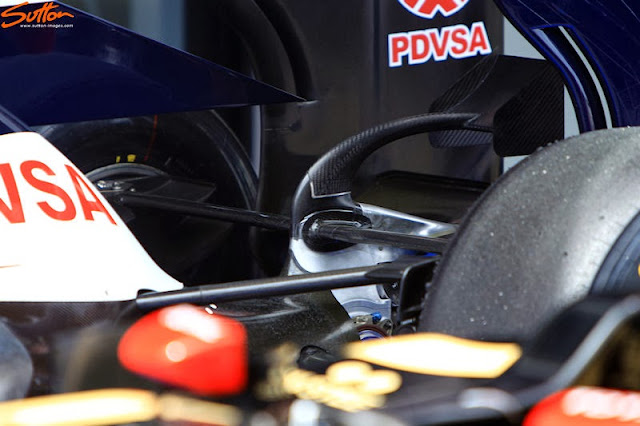 The construction used in the early 2013 tyres led to a widespread proliferation of these tyre wake slots up and down the field with only Lotus and Caterham not choosing to field Endplates featuring the slots.  They've been run with varying success dependant on the prevailing choices made elsewhere on the cars and so I suspect we will continue to see their use in the forthcoming season too.

The other area of interest in regards to Endplates from 2013 was Ferrari's use of trailing edge slats whereby they disconnected two strips at the rear of the Endplate to allow airflow to move between both pressure sides.  Their purpose was to increase the overall effectiveness of the region and the structures leading into it, namely the upper mainplane and top flap, the beam wing and the diffuser. 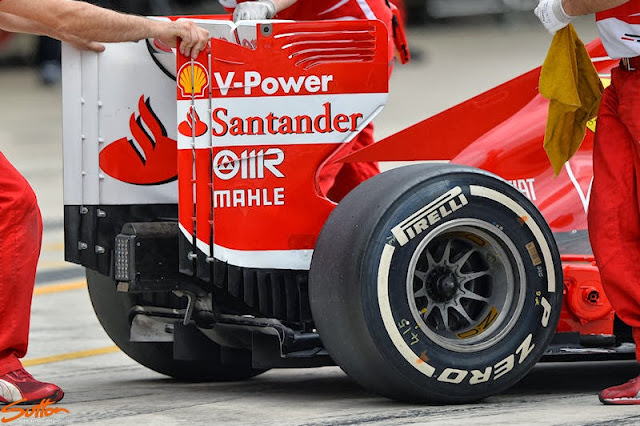 The last area of conversation I'll have in regard to Endplates here is something that Red Bull looked at doing in 2009 and abandoned when they adopted their Double Decker Diffuser. 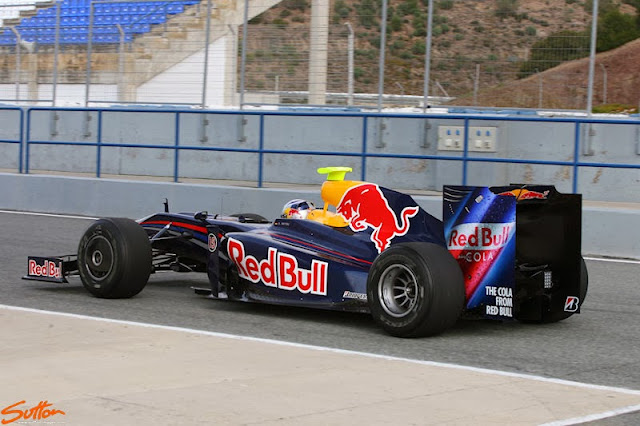 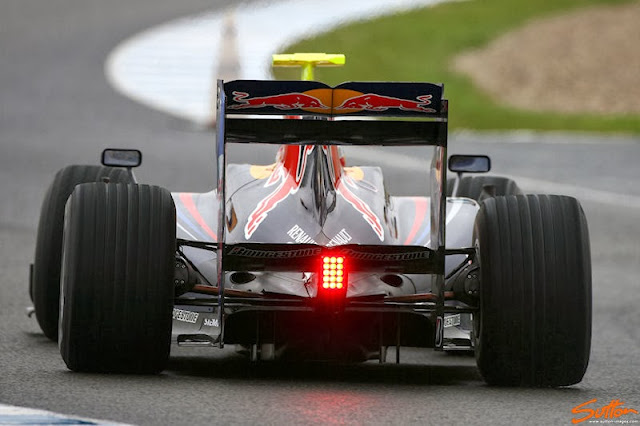 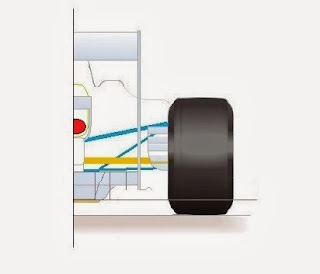 As we can see from the images above and my diagram on the left the principle is that you extend the Endplates down to form the outer wall of the Diffuser.  This would allow you to minimise the effects of tyre squirt on the Diffuser as not only does the squirt have further to travel but by virtue of the Endplate and a footplate creating an elongated vortex it's possible to skirt the Diffuser's flow.  The problem however is that you're robbing the Diffuser of 250mm of surface area as the Rear Wing is only 750mm wide whilst the Diffuser enjoys 1000mm of space.  It'll be interesting to see if anyone takes this route as the 125mm either side of the Endplates could prove an intricate design space.

The Y100 region see's the central portion of the car increase it's design free zone by 25mm from 75mm (from the centreline) for 2014, the reason for this is the the exhaust outlet must not lie more than 100mm from the car's centreline.  This of course has several implications to the approach the designers take to the surrounding components not only because it could aid aero wise but also for some might aid in structural integrity and packaging.

Learning from the past and looking back to some of the design choices implemented more recently we cannot ignore the possibility some teams may choose to utilise central pylons.  Used by teams in the past these pylons can not only be seen a small aero contributor but also a means with which to add rigidity and a passage for the DRS hydraulics.  The loss of the beam wing of course means that the need to affix the rear wing in position becomes a little more difficult.  I feel that most teams will simply bolt the wing to the floor via the endplates, this will mean that they will have to beef up the Endplates especially if they are utilising any of the aforementioned leading or trailing edge slots or slats.

Of course designed in tandem with the engine cover and exhaust position it may well be possible to re-direct the exhaust plume and utilise what little energy is still at it's disposal.  I mention this because over the last few seasons exhaust blowing has become the most prominent way in which to increase rear downforce.  With the exhaust plume angled at the gap between the tyre and the diffusers edge it isolates the diffusers flow.  The turbo's connection to the MGU-H puts more emphasis on recovering the usually expended energy on creating more power, dampening the amount of energy available for exhaust blowing.

The increase in width from 75mm to 100mm in the central zone may not sound huge but if we consider designs like those used below by Sauber in 2013, it does offer yet more scope for intricate rear wing designs.  The 'Spoon' Wing uses a dished central portion to maximise both increase in downforce whilst maintaining a similar level of drag.  Of course the design is implemented to cater for a wide range of speed and yaw angles and so although it may not be the best design for all conditions it makes up for it in others.  Furthermore the original intention was to utilise this style of rear wing with DRD but with Sauber struggling initially in 2013 (due to the change in tyre construction) their design perhaps never reached it's maximum potential. 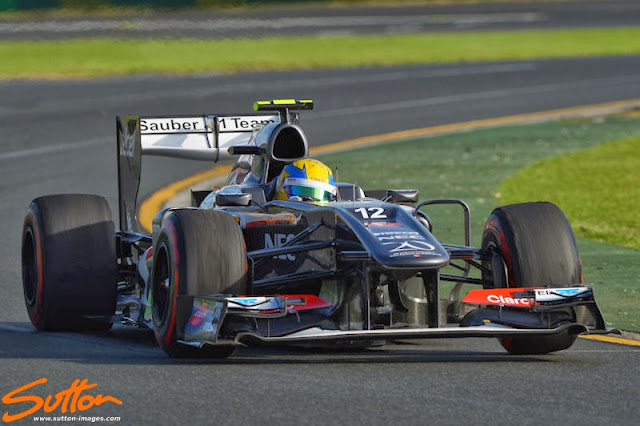 2014 is going to pose the teams with many fresh challenges one of which is cooling the V6 Turbo powerunits and the associated ERS components.  Not only is it essential to get the right quantity of airflow through the apertures to cool them but the size and geometry of the outlets is also an essential design consideration.  More cooling = more drag and moreover the placement of a cooling outlet can have a detrimental effect on the airflow it feeds into.  Having used it's energy to cool the components it's been targeted at, the airflow becomes warmer and lower energy making the positioning of the outlet crucial.  This makes internal aerodynamics an artform that cannot be ignored with increasing/decreasing speed, yaw, temperature etc all playing their role in how the car works as a whole.

Brake Ducts have also become somewhat of a go to area in terms of both creating their own downforce but also in manipulating the airflow to create structures that will enhance the diffusers performance.  The new powerunit and moreover MGU-K regulations mean that braking done at the wheels will be much lower from 2014 onwards.  The MGU-K will be tasked with harvesting energy usually driven at the rear wheels and so we will see much smaller brakes used next season.  This of course means that the necessity to cool the brakes is also lowered, leaving much more room/scope for designers to elaborate on their already intricate designs.  As an aside I'm left wondering if less braking requirement could lead teams to re-investigate inboard brakes at the rear of the car.  I only mention it as it could have some interesting aerodynamic implications along with the reduction in un sprung mass (albeit this is fairly negligible in modern F1).  The spinning brake disc would of course impact the surrounding aero, which could be funneled toward the gap between the diffuser and tyre.  Of course the energy involved would be significantly lower than the exhaust energy the engineers are used to but could perhaps provide some solace?

Another spinning element that I talked about frequently throughout 2012 was the encapsulated halfshafts that Red Bull utilised.  Encasing the shafts within the lower wishbone not only stopped it's airflow effecting the exhaust plume that would have passed by it, but also allowed the lower wishbone to placed a little higher and out of the way of the airflow.  Most of the field converged on this idea for 2013 with Lotus the only lead runner to continue with exposed shafts.

As always the aesthetic draw will come from the front of the car, as the media are left aghast at the abhorrent state of the nose section.  Meanwhile the real story will be whom has made up the most ground early on at the rear of the car.  I look forward to seeing the different application of designs up and down the grid as the teams deliver their launches less than a month from now.