No shadow of a doubt, Mercedes were the most improved team of 2013.  The Silver Arrows upturn in form came as a surprise to some of the paddock as they often topped the time sheets come Saturday afternoon.  It's been quite a journey for the Brackley based squad over the last few years. Following on from the Championship winning BGP001 was always going to be a difficult task, made more difficult by the cuts made to survive in 09 and restructuring that followed with the sale to Mercedes.

That gestation period comes full circle once more with a new set of regulations, key personnel on board along with investment in infrastructure likely to pay dividends. It will be interesting to see how the dynamic changes with Ross Brawn stepping aside and Paddy Lowe taking on the technical aspects of Team Principle, whilst Toto Wolff looks after the commercial aspects, all the time under the scrutiny of none executive chairman and F1 legend Niki Lauda.

The teams timing and confidence shown by Stuttgart in order to facilitate the changes may prove crucial, with perhaps the biggest and most pivotal change coming toward the middle of 2012.  The decision to invest heavily in the team not only inspired Lewis Hamilton to join the team but paved the way for new tooling and modifications to their wind tunnel to take it and production to 60% rather than 50%.

2013 was just the precipice in terms of the results that can be achieved by these changes. With the Coanda exhaust fully implemented in the WO4 and providing a better platform than the job done to place it on the WO3 mid season it provided their fans with some solace. The team also made big strides forwards with their Front Wing design providing much needed new impetus on a design that had been being used as an evolutionary platform since the 09 campaign.  Other key areas of the car saw decent development and indicates the team are heading in the right direction for 2014.

Having already released several teaser images ahead of the actual launch some of the key design features had been seen before the unveil. 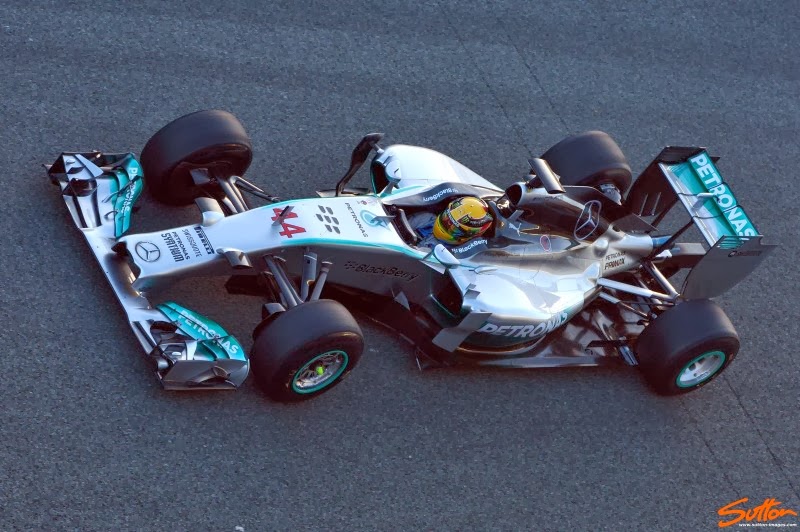 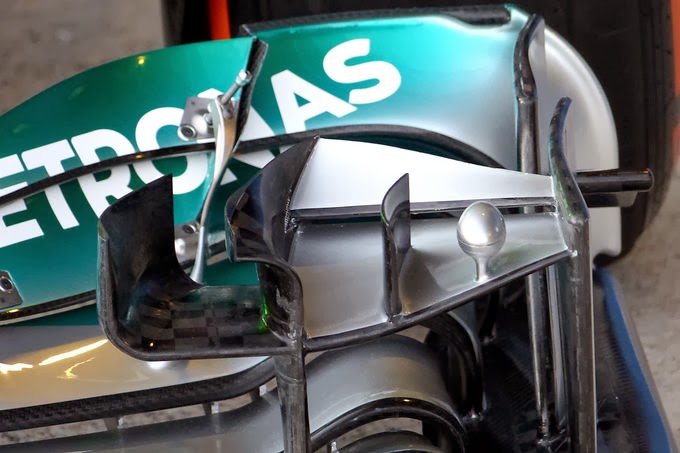 
The W05's Front Wing is a refined version of it's predecessor taking into account the loss in overall width (150mm or 75mm either side) the Main Cascade has been treated to an additional Vertical Strake to aid in turning the airflow around the upper outer quadrant of the tyre's shoulder.  In the outer portion of the now split Cascade we see the team have once again installed an IR camera to assess the thermal properties of the front tyre.  Added to the 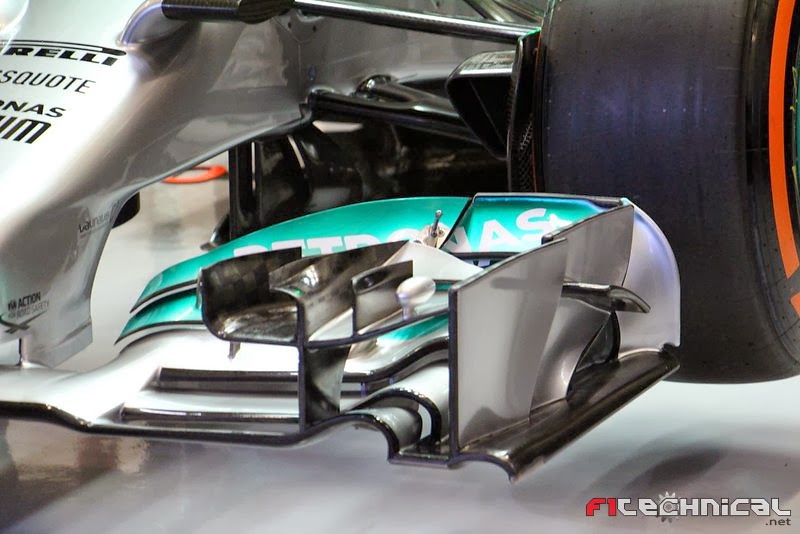 larger Cascade we find a smaller one very much (aesthetically) like the one used on the McLaren. The Endplate features a slotted horizontal vane similar to curved version Lotus ran at one race last season.  This vane encourages a high pressure gradient against it's lower side to force airflow out of the slot, this undoubtedly helps the region turn airflow outbound. 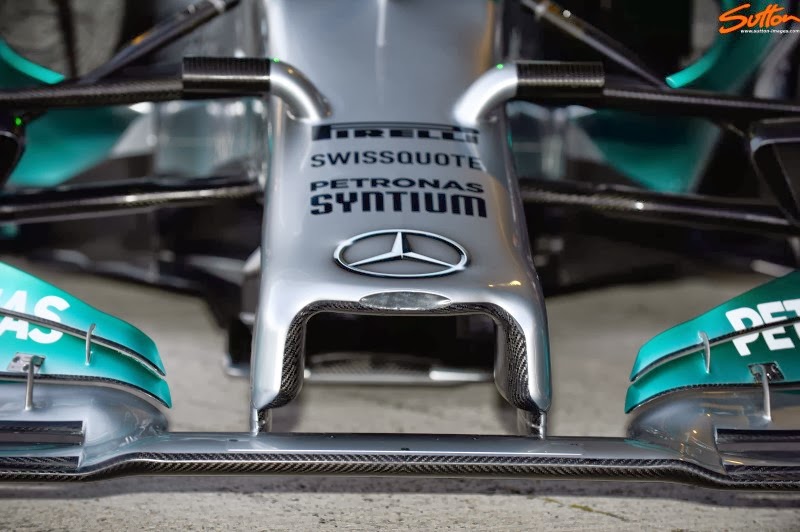 Mercedes have taken a similar route to Ferrari in their adoption of a high chassis and step from the nose with a graduated rearward/inverted slope to the main section of the nose.  However in order to gain more space between the Mainplane and Nose tip they have used the work around in the rules similar to that of Lotus who presented their Sabretooth before them.  The nose has been made with 2 hanging pylons in order to meet the 185mm nose tip 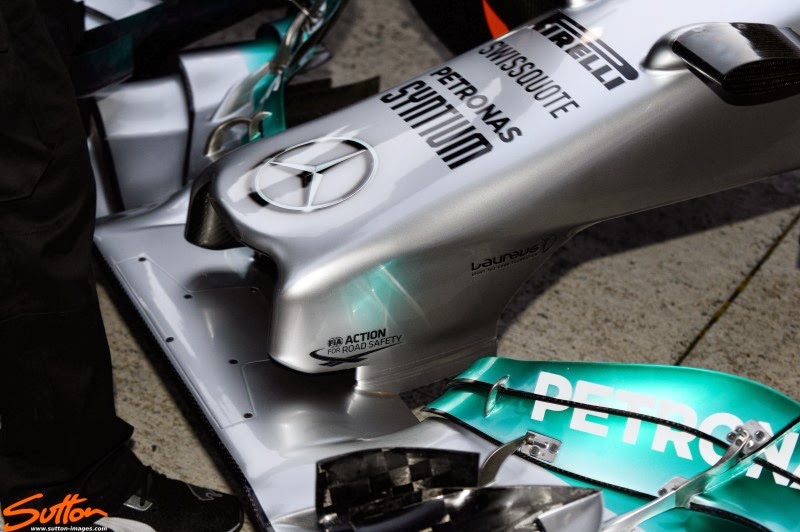 height and 9000mm2 cross section at 50mm behind
the tip regulations, with one side longer than the other but the opposing shorter side flanked by a Vanity Panel.  Slighty rearward of the noses hanging wider pylons we find the much narrower connecting pylons which arc backward to maximise space under the nose.  Like Ferrari the team have utilised the mounting of the FOM cameras to glean a small aerodynamic advantage, arc'ing bodywork from the nose over to the mounting points.  This adoption reminds me of the 'Elephant Ears' the team used back in the Honda days. 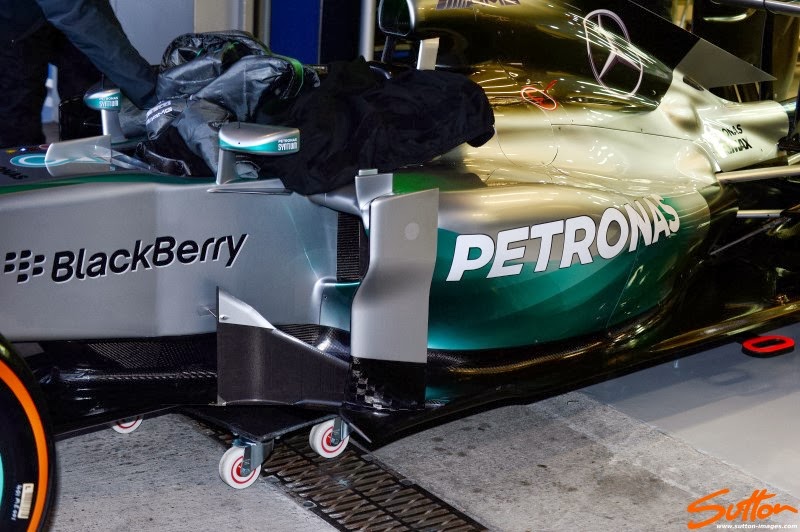 At the front of the Sidepod the inlet seems relatively small compared to the McLaren running the same Powerunit, whilst the team have chosen to run the same triangular cockpit strake ahead of the pod as last year.  On top of the Sidepod we find two Vortex Generators with opposing designs looking to change the airflow in different ways.  The Sidepod Airflow Conditioner is doglegged like last years design in order accentuate the Sidepods inlet profile and allow maximum airflow around toward the coke bottle.  Cooling from the Sidepod is taken care of with an outlet ahead and inline with the Suspension pickup allowing space underneath for the airflow to cut around into the coke bottle.. 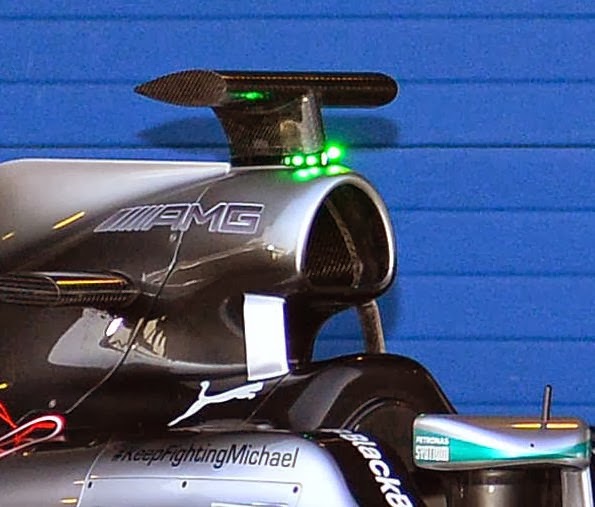 The team have worked hard on maximising the undercut which allows a cleaner flow of air to the rest of the car, mounting the construction spars in a lent backward orientation encourages the airflow to pass over the engine cover aft of it. 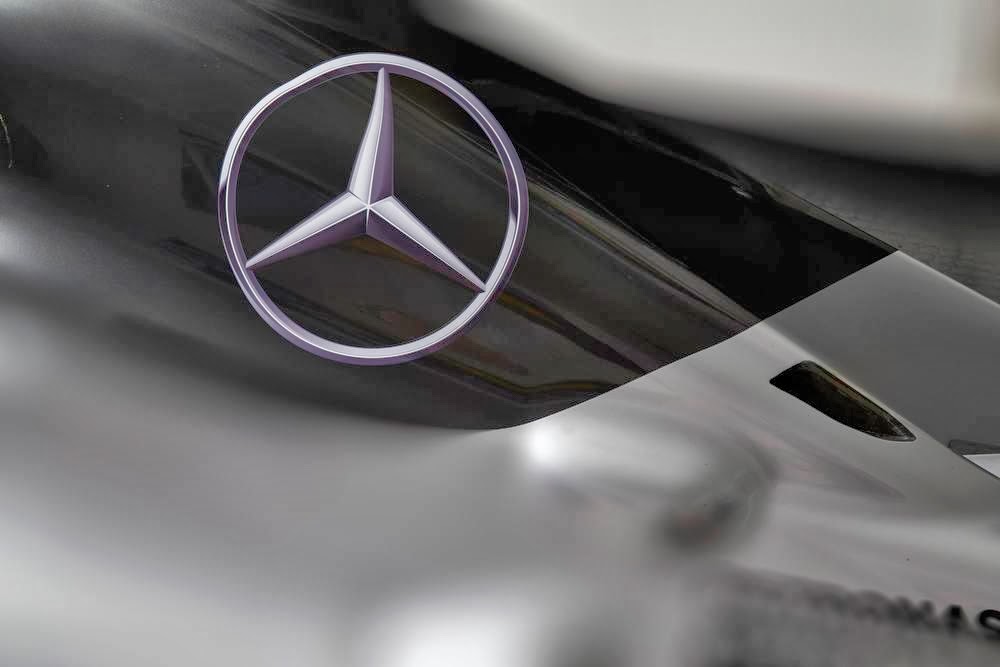 Featuring a Shark Fin to meet with the dimensional regulations we also find a pair of outlets at the base of the fin which undoubtedly aid in the targeting of the exhaust gases exiting behind it. 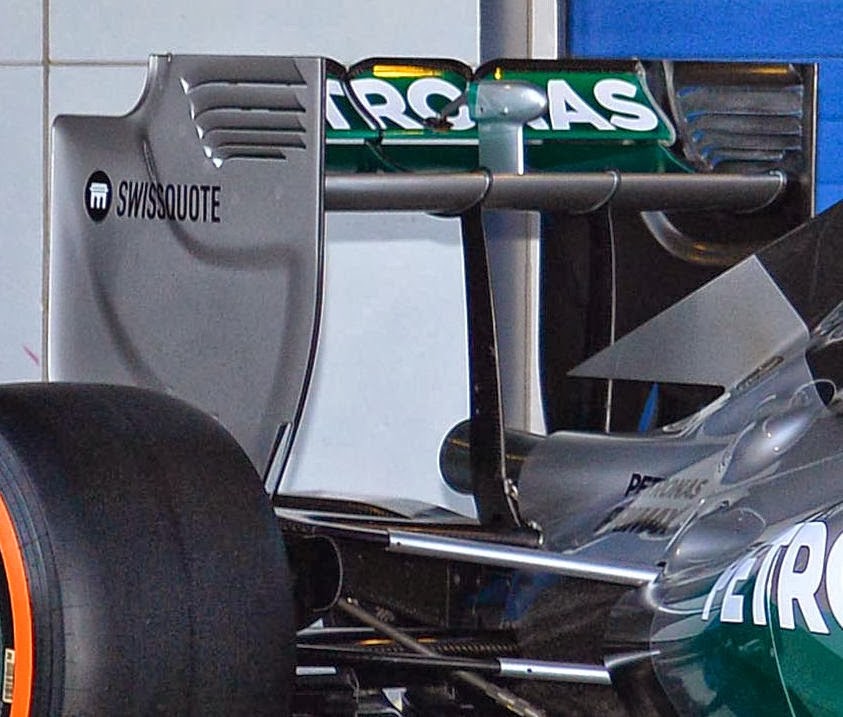 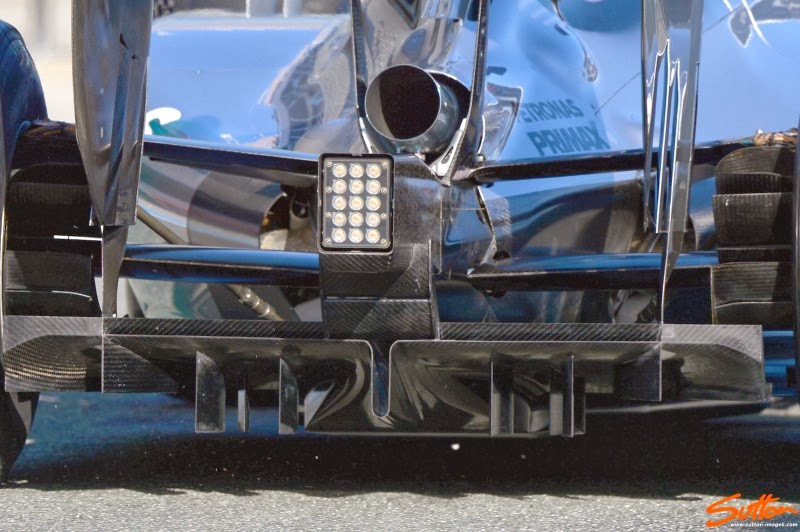 Mounting the rear wing for all the teams this year has been a decision based process of strength over aero, the loss of the Beam Wing has meant that teams either make their Endplates more rigid or run with centralised mounting pylons.  Mercedes have decided to go with the latter option and likely because they have decided to utilise serrations in the Endplates lower rear section. This is a departure for the team who have failed to follow the lead of other teams over the last few seasons in using Trailing Endplate Strakes.  The team have retained the leading edge tyre wake slots they used on the W04 but have moved them much closer to the leading edge and run them much lower to the bottom of the Endplate.  The catalyst for the move coming from the serrated/fanned trailing sections of the Endplate which will of course aid in creating upwash, something that will be sorely lost along with the Beam Wing.


Initially it seems to be a fairly rudimentary approach when consider some of the other more complex looking designs around that area but the team could have other components in the pipeline with this less complex arrangement used for initial testing. 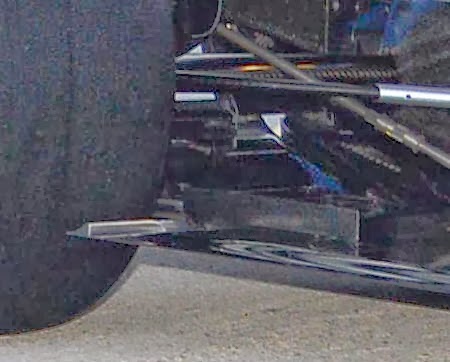 Ahead of the rear wheel we can see that Mercedes have retained the tyre squirt slot that the W04 ran but the Vertical Strake inbound of it has been straightened with it's predecessor having been arched.