The rear wing will have been an important design consideration for the teams this year with both the loss of the lower (beam) wing and the loss of 20mm in height for the upper wing planes. The beam wings loss has both a structural and aerodynamic impact on the overall design and so teams will use different solutions to minimise the losses. In the case of Ferrari they have opted to use two vertical mounting pylons [1] that sit atop of the crash structure and bow out to around the maximum 100mm from the centreline to allow the exhaust space. 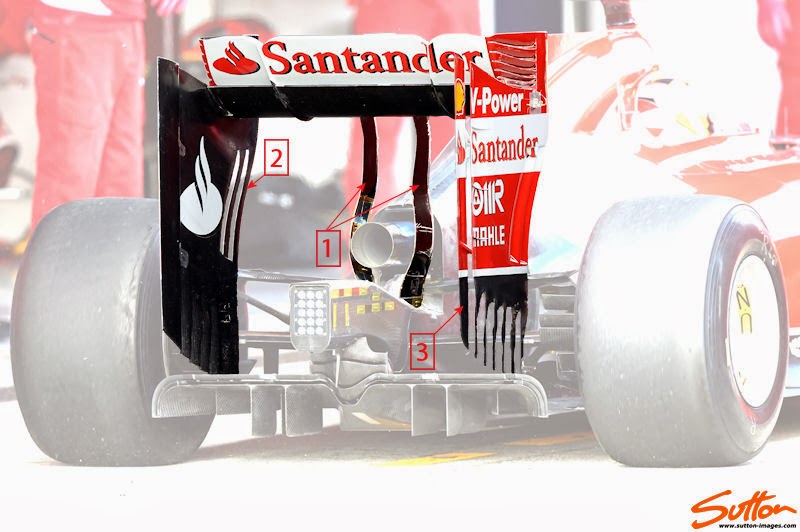 Ferrari used leading edge tyre wake slots [2] on several occasions last season, having seen others make marginal gains from their use. The idea is to make the Endplate more efficient, allowing the pressure gradient to bleed between both sides of it. We call them tyre wake slots as the airflow structure emitted by the tyre is important in this interaction with the Endplates. Whereas last season the team utilsed singular, slim tyre wake slots at the leading edge of each Endplate, the F14T has much larger twin slots on each Endplate.

At the tail of the Endplate we see that Ferrari have carried over an element from the F138, albeit a singular element this year rather than it's predecessors twin version. These trailing edge slats [3] not only increase the aspect ratio of the wing, giving an increase in downforce, but also displace the formation of tip vortices delaying the onset of formation drag.
Tagged
Newer Post Older Post