As we know Lotus have struggled in pre-season not only with their missing of the first test in Jerez and the lost mileage that ensued but also the lack of mileage covered at the following two tests.  The team will then perhaps be buoyed by the fact they managed to complete 29 and 43 laps with Maldonado and Grosjean respectively, both of which found their race curtailed by ERS issues.

An interesting development from the team arose throughout the weekend and highlights another area of asymmetry on the E22.  The team have enveloped a duct into left hand side of the floor, mid way along the Sidepod (for reference).  It's actual purpose is unclear at the moment but due to it's positioning is likely a further cooling option with aerodynamic implications rather than simply an item placed with aero intentions. 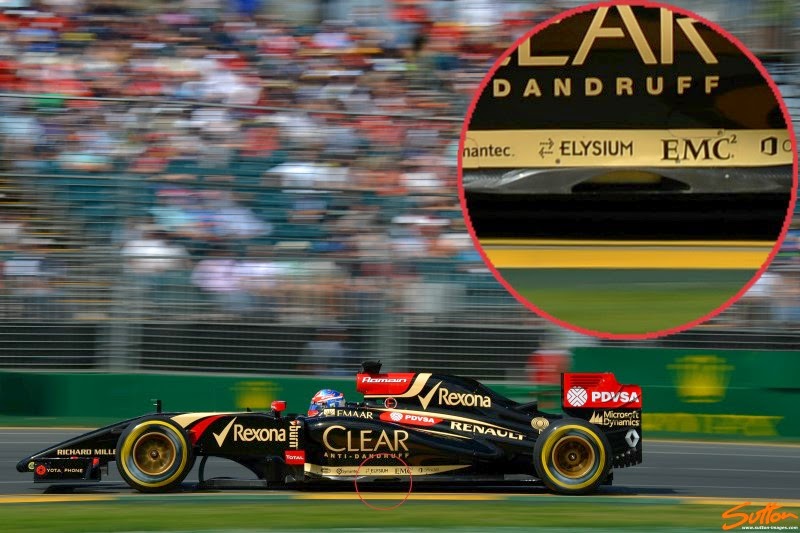 Above: A close up of the left hand side of the floor shows the duct

Above: As we can see the duct is nowhere to be found on the right hand side of the E22


My best guess would be that the team are seeking a way of dispatching of some of the heat generated by the ERS heatsinks. (Explained here: Explaining 2014's Powerunits & ERS) Managing the energy that is recovered is a massive task with the transfer of energy between the MGU-H or K to the Energy Store comes at a cost: Heat.

The placement of the duct is interesting as it's perhaps a carry over from a lesson learnt in 2013 with the teams exhaust cross-under tunnel.  My understanding of the way the tunnel worked was not only to do with the local airflow structures adhering to their surfaces and the ensuing 'Coanda' effect but was also a result of the front wings flow structure and front tyre wake.  The airflow dispatched by the front wing is done so in order to control the direction of the tyre wake, however it will at some point make efforts to rejoin the airflow structure at the edge of the floor.

Many teams use 'Scrolls' which are a rolled up section of floor that protects the airflow traveling around the sidepod from unwanted tyre wake.  The new floor duct lies in a position normally associated with the scrolls and so we have to assume it's making use of this tyre wake.  The narrowing of the front wing by 75mm either side has had a marked effect on the aero and so some teams are making a marked effort at moving the airflow further outward to counter the effects both locally and downstream.  With Lotus having run a new front wing in Australian designed at just this I suspect they are targeting their efforts at aligning the flow around the duct.