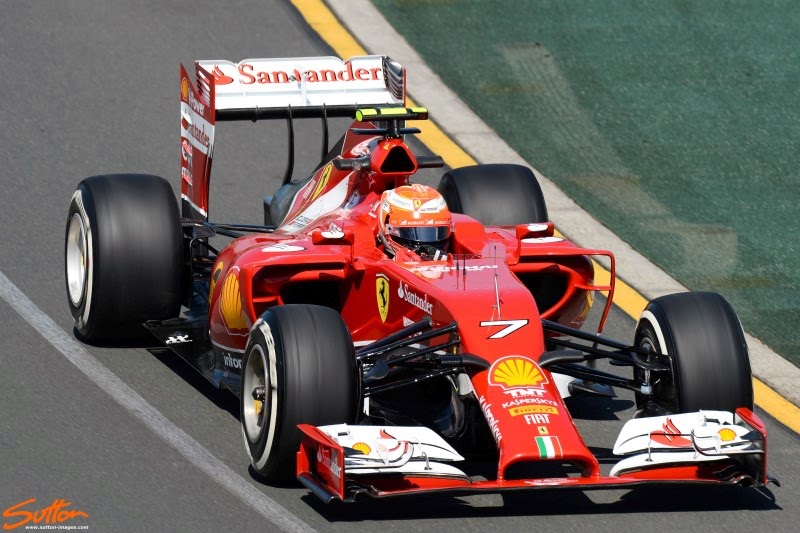 Omnicorse have this morning written a piece detailing issues encountered by the the Ferrari powered teams at the start of the Australian GP.  The crux of which point to a mistake by the FIA in not resetting the flagging system after the start of the race that would enable the ERS to operate under 100km/h.

Now although I'm quite happy to accept that this error could have hampered the team from the line and around the first lap, the team would have become aware of this deficiency pretty rapidly.  This would have led to some interesting chatter between the drivers and engineers, as they'd likely have to fail plenty of settings in order to reboot the ERS and run it at a decent output, making the F14T somewhat of a challenge to drive whilst conducting the changes.

In contrary to the statement of Omnicorse.  "We can say that the Ferrari of Fernando Alonso began to march properly only after the first pit stop: Spanish, therefore, had to give up about 120 horses for 33 to ride."

Fernando on the soft tyre had been lapping in the mid 1.36's during his first stint with a few laps down into the mid 1.35's.  After his 1st stop (which is when Omnicorse report the issue was rectified) he once again took on the soft tyre and continued to lap somewhere between mid 1.36's and 1.35's with a couple of high 1.34's thrown in for good measure.  This leads me to believe that if there were an issue at the start, it was rectified quickly to which their continued pace alludes to.

As we know the 059/3 is down on overall output when compared to Mercedes, with Ferrari already stating that they have had issues with the ERS and were running at a reduced capacity in Melbourne.   A figure of 120bhp maximum from the K rather than the full 160bhp has been mooted which would suggest some of the lap time deficit to their Mercedes rivals.  In response the team expects a total overhaul of the way in which the ERS behaves to be ready for the Bahrain GP.

We must remember that the total output of the car is now reliant on the ERS as it makes up just under a 1/4 of the cars total power but moreover is needed to assist the ICE throughout the rev range.  If you're struggling to understand just how the relationship between the ICE, Turbo, MGU-K and H all work then might I suggest watching my latest video:  Understanding 2014's Powerunits.
Tagged
Newer Post Older Post