2014's huge rule shake up could certainly be seen by any team as an excuse to have gone a little conservative initially, especially those running the Mercedes powerunit who clearly have a performance advantage over the Renault and Ferrari powered teams.  Force India certainly could be seen as one of those teams, although they have a good race package haven't pushed the boundaries to the extremities as some.  Having said that their deployment and installation of the powerunit is admirable for a team that is often referred to as midfield.

In search of additional aero performance the team had several key modifications lined up for the post Bahrain GP test that also adorned the car in China.  If we take a look at the VJM07's Sidepods we'll note that the undercut sculpting and rear section of the sidepod have seen some minor amendments, improving both internal and external flow structures that'll not only reap the rewards of better aero flow but also increase the efficiency of the powerunit. 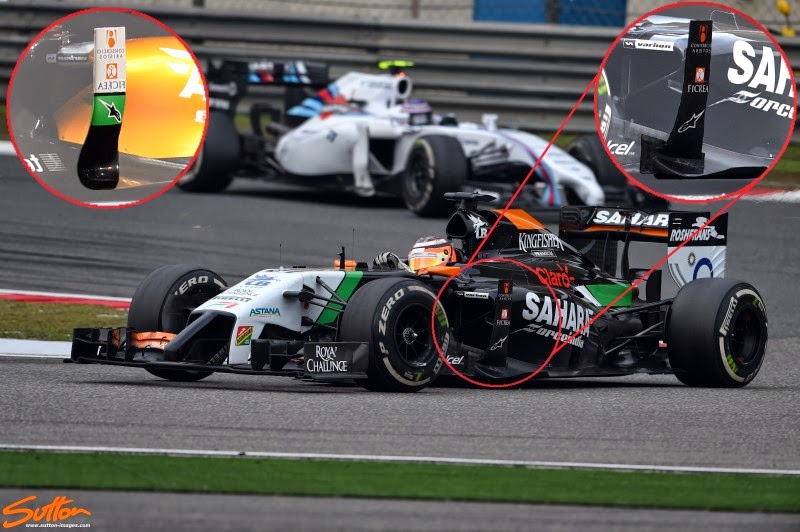 As we can see in the image above the team have also made some changes to the front of the floor and surrounding components to further maximise the sidepod changes.  The sidepod airflow conditioner now arcs from a smaller bargeboard which sits slightly outbound of the main one, whilst the floor has been scrolled at the leading edge and the side scroll has been increased in height and length.  These changes work to better utilise the wake dispatched by the front tyre, increasing the effect downstream giving the new diffuser the opportunity to create more downforce.
Tagged
Newer Post Older Post