I'm sure the McLaren team will be the first to admit that their start to the 2014 season could have gone better especially as they have the advantage of the best powerunit on the grid. It's not all about the powerunit though and their rival Mercedes has clearly done a better job of the catering the whole package including the aero side to the 2014 regulations.

For Barcelona the team arrived with new components to try and close the gap to the front but with a deficit of around 1-1.5 seconds to the Mercedes any upgrades they bring would need to find around 2 seconds per lap, a monumental amount of time to find. 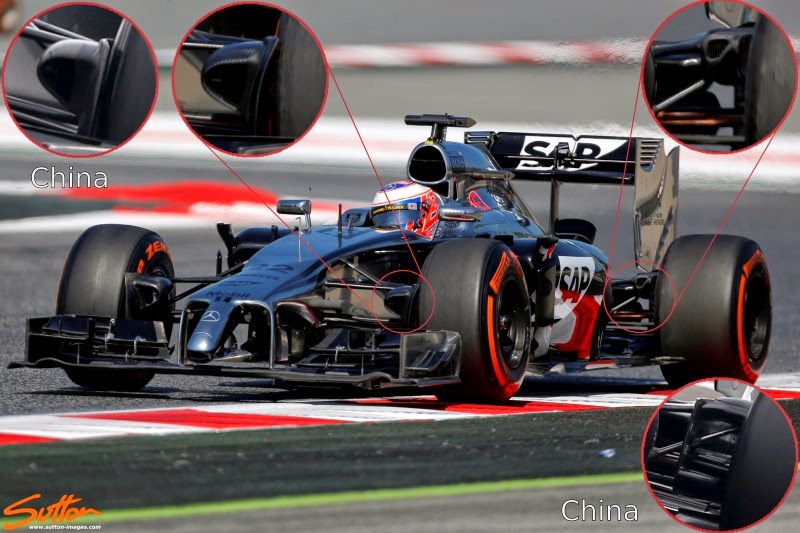 In terms of minor adjustments, teams will make small amendments to their brake ducts at each race, by and large to affect the performance/temperature of the brakes. Occasionally though we'll see them make a step change in how they approach the winglets that adorn the brake ducts though to leverage a particular type of aerodynamic condition. For Barcelona, McLaren had amendments to the front and rear brake ducts with the front brake duct fin shaped with a much larger curve. This curve means the top section of the duct protects that section of tyre and will therefore influence the way airflow moves around the tyre, influencing the wake too. The way in which the fin is moved away from the tyres edge lower down invites more airflow into that portion of the brake duct indicating that they're shifting their attention away from how the airflow enters one portion of the brake fairing onto another. Air flows around many pathways in a modern brake assembly due to the way all the components are faired in to reduce the negative effects of an open assembly. Pipework transports airflow around the discs, calipers and is also blown laterally out through the wheels themselves to mitigate any unwanted airflow effects as the airflow from the front wing is pushed around the front tyre. Sometimes slots are left open or covered on the 'caketin' depending on how much heat wants to be transferred via the rim to the tyres and so is hugely driver and circuit dependent.

At the rear of the car we can see that the array of winglets usually surrounding the front inner edge of the rear wheel were abandoned in Barcelona leaving only the brake scoops exposed to collate and distribute the airflow to the rear brakes.