McLarens bad start to the season has been clear to see, I've discussed before how several key design decisions made when designing the car have been pivotal in this years car performance, meaning bouncing back this season will be difficult at best. However for Austria and Great Britain the team have a raft of parts to try and rectify some of their deficiencies.

An area that was criticized by many last season was the MP4-28's front wing. Pivotal as we know because it shapes the air as it flows over the rest of the car. The team made some changes that bought them relatively inline with the rest of the field toward the end of last season. They were also the first to utilise the outer Endplate gradient winglets this season (Mercedes & Lotus have also followed suit since) but their wing in general still feels a little basic when compared with the front runners. 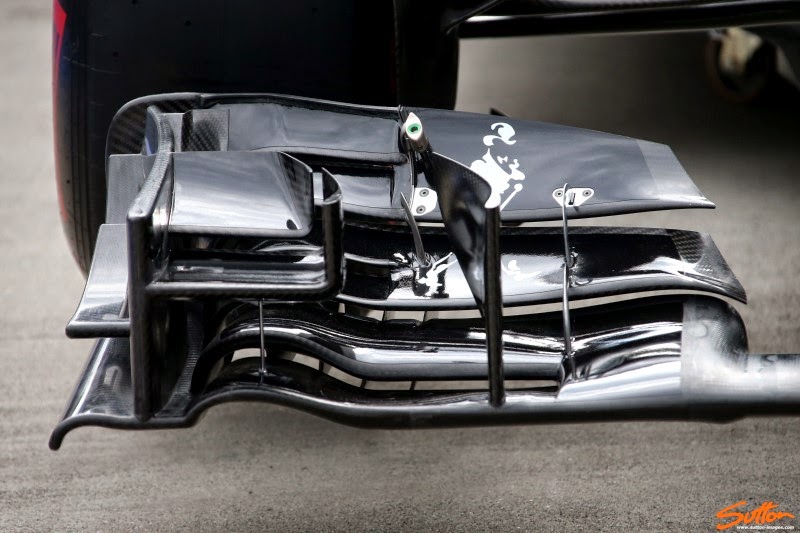 The changes made this weekend were to the cascade winglet, making it much narrower again (the team ran a narrow element early in the season) and adding an 'r' cascade inbound of this. Both are changes designed to intensify the way in which the wing pushes airflow up and around the front tyre.

Changes were also made to the upper flaps, rolling the inner tips which will have an effect on how the Y250 vortex is generated.

It's far from me to say their front wing doesn't work or is worse than others, however it's development speaks volumes of the theirs and others predicament this season. Development this season has been deliberately curtailed by the FIA in order to help cut costs, with reductions to CFD and wind tunnel work. The teams have of course been given the opportunity to test after some of the races this season but without the time available to evaluate parts before generating full scale parts this seems a little contrived. Making up ground, has therefore become more difficult and as such the ebb and flow that follows the sport begins again with the top teams re-investing in areas that will bring them gains.
Tagged
Newer Post Older Post