McLarens bad start to the season has been clear to see, I've discussed before how several key design decisions made when designing the car have been pivotal in this years car performance, meaning bouncing back this season will be difficult at best. However for Austria and Great Britain the team have a raft of parts to try and rectify some of their deficiencies.

McLaren's MP4-29 has several large concepts built into its design with their 'Wishbone Wings' (covers that shroud the suspension elements) being one of them. Over the last few races the team have trialled the car without both the upper and lower covers and/or just the bottom ones during Free Practice sessions but reverted to their use for the race. 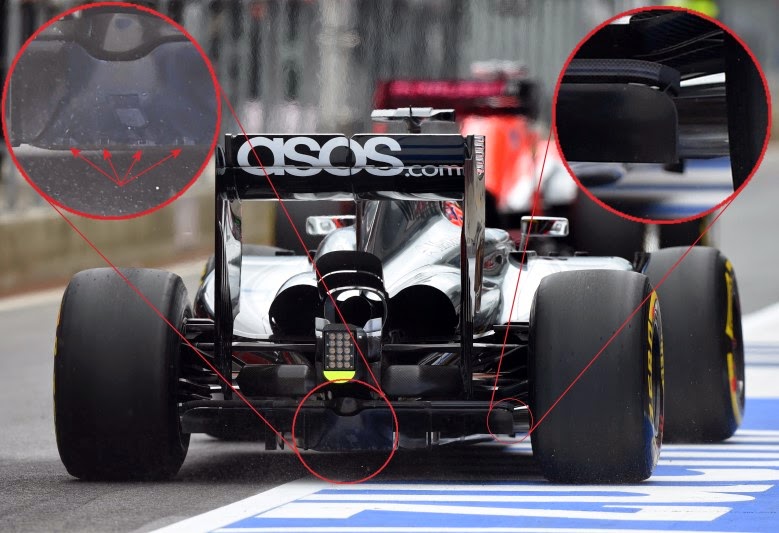 For Austria the team revised some other areas in order to run without the upper shrouds for the race. That's the problem with a design that's inexplicably linked to the aero structures at the rear of the car, when you remove or redesign it, it has a compound effect on other components.

In Austria the team made a revision to the perforated gurney trim, cutting it much shorter. Taking a leaf from the Red Bull book (although Red Bull themselves haven't fully committed to their use all the time) the team also added some small Vortex Generators at the diffusers leading edge, designed to make the transition between the planks flat bottom and diffusers incline less overwhelming. This will ideally make the diffuser work over a wider operating window and therefore give the driver a little more balance.