Red Bull can surely stake a claim for the best chassis on the 2014 grid with Mercedes coming in a close second but with a powerunit deficit they're still pushing for more efficiency/downforce.

Red Bull's greatest asset over the last few seasons has been controlling the way in which the diffuser is sealed, clearly making huge strides with exhaust blowing to magnify this. With the exhaust placed along the cars centreline this season, sealing the diffuser by this method is all but impossible, but the teams still want to do their best to seal the diffusers edges to maximise downforce. 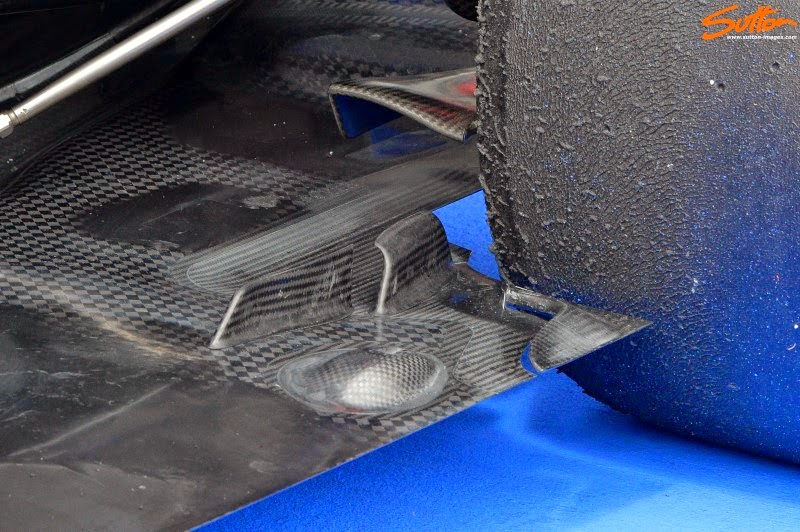 One of the largest factors in their quest to 'seal' the diffuser is the way in which the tyres squirt airflow laterally into the diffusers path under deformation, leading to inconsistent levels of downforce. The teams have been managing this for several seasons now with cuts, slots and strakes ahead of the rear wheels, designed to roll up and vorticise the airflow in that region, reducing the effects of 'tyre squirt'. Several races ago Red Bull redesigned their tyre squirt slots ahead of the rear wheels with a dog legged section cut out, for Austria the team arrived with a new vertical strake design. Split into two sections, the rearward strake also has a scroll on its top edge, these strakes will work together to roll up the airflow into a vortex and reduce the impact the tyres deformation has during cornering on the diffuser.

At their home circuit the team decided to once again utilise the upper Y100 Winglet/Monkey Seat that they employed in Monaco. 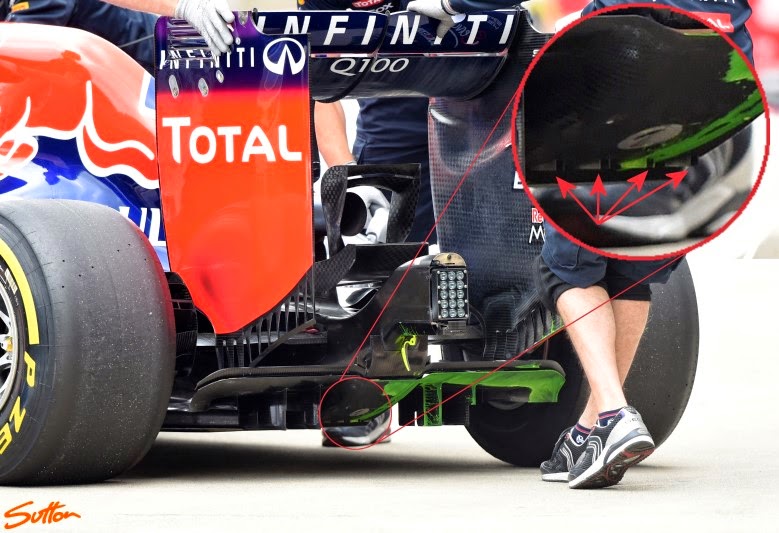 They also re-introduced the small vortex generators at the leading edge of the diffuser. These small devices help to overcome the diffusers angle by disturbing the airflow, leading to a more stable delivery of downforce over a wider speed range.

Both of these additions are primarily used to give the driver more stability but will come at the expense of a small drag penalty. Meanwhile the rear wing upper flap's V groove was also reduced for Austria which will not only take advantage of the team using the upper Y100 winglet to garner more downforce but will lead to a slight increase in drag too.