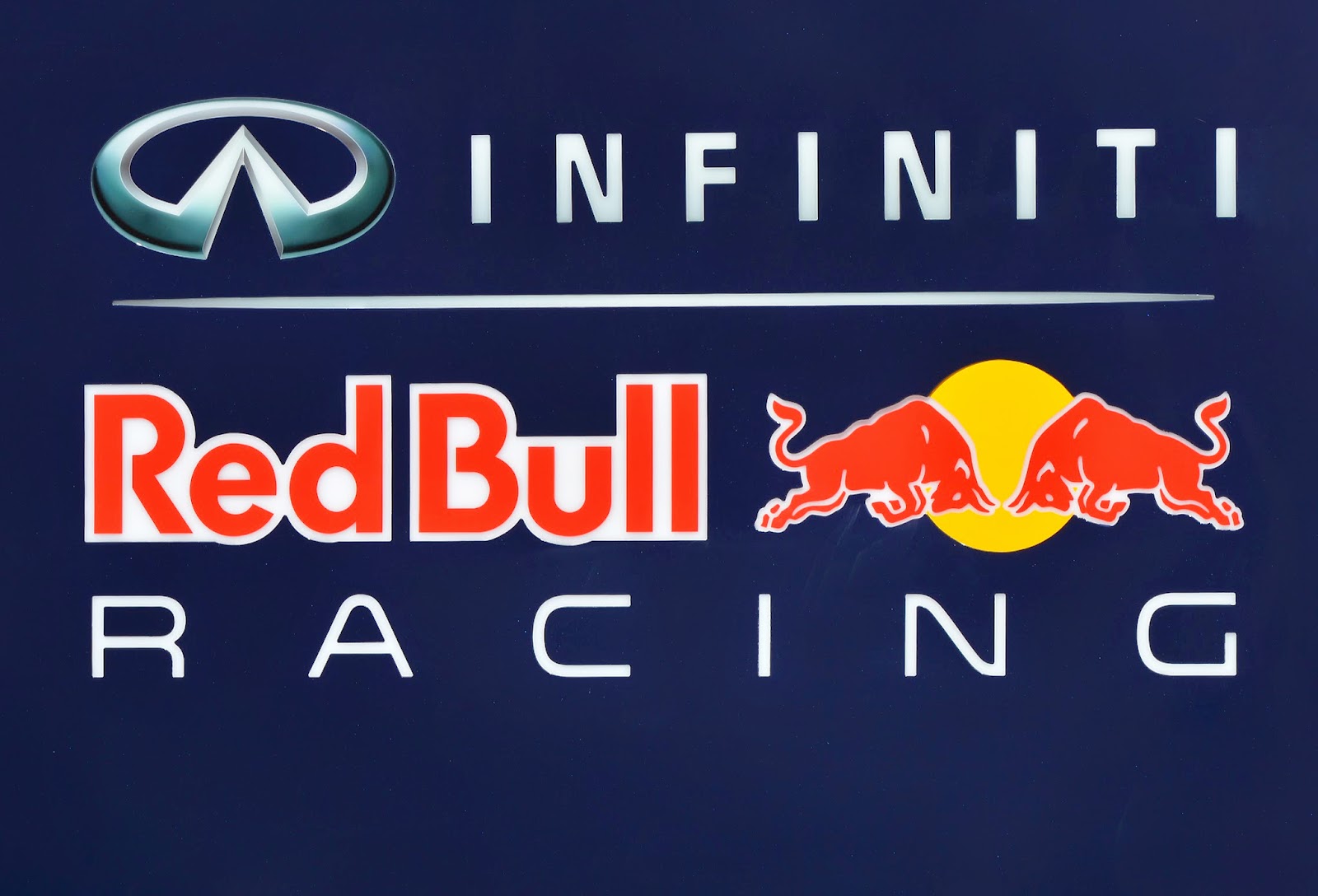 I was lucky enough to go along to 2013's Openhouse at Red Bull's factory in 2013 and although they'd clearly cleared away all the new parts, for any fan it was a window into the world of the sport.

When I received an email from Red Bull this year though it was great to see they were doing something a little different.  The venue was Daytona Raceway, just down the road from their factory in Milton Keynes.

Karting has always been something I've enjoyed but like most people have no real benchmark to work with. Bar one, off day I've always been at the top of the time sheets when I've raced at various circuits.  It probably helps that I'm super competitive, even though I'm a laid back guy, put me in a situation where I can win something and for some reason I change. (Even playing cards around the table with the family I have to win, they hate it)

As you can imagine I'd been looking forward to going to this event and have spent the last few weeks visiting our local track getting my eye in.  Wight Karting has recently re-opened on the Island and once again affords me an opportunity to do some karting.  The 450m track might not be as large as the 1150m International circuit at Daytona but it is a challenge nonetheless.

I've been off the pace at Wight Karting since going there but have been getting progressively quicker, I'm still around 1.5 seconds off the quickest lap but I'm sure I can make this up.

Arriving at Daytona I was filled with a little trepidation as although I've always gone well at Kart days the 1.5 second deficit at my home track was perturbing.  As I walked across the car park to reception so did the smiling assassin, Daniel Ricciardo.

As Dan joked in reception with some of the Red Bull staff that they should look after his bag, as it had 30 grand in it I signed in, then noticed the leaderboard. 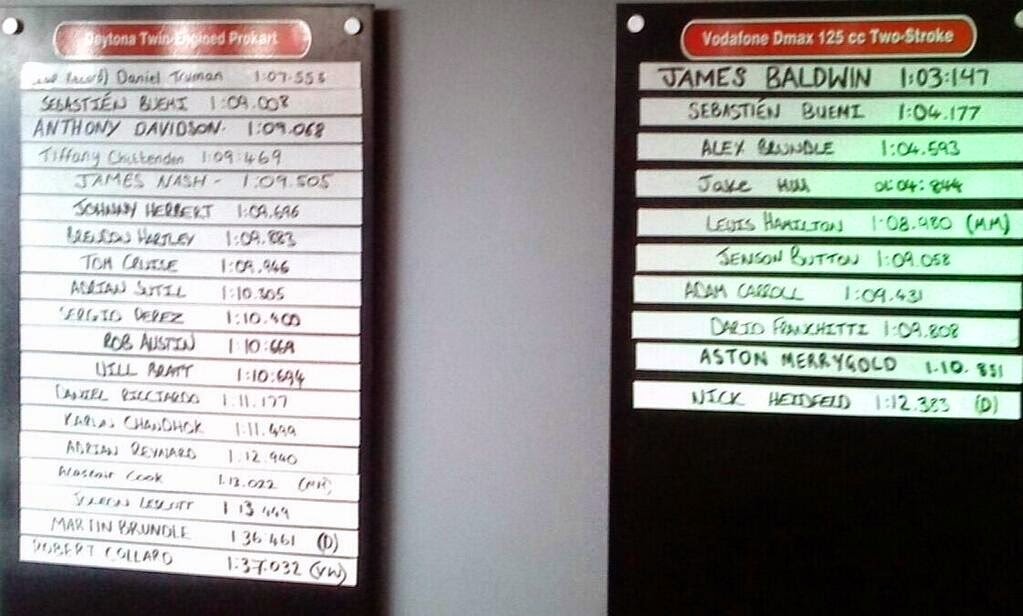 That was the gauntlet officially laid down, with Sebastien Buemi and Anthony Davidson both due to lay down times placed 2nd and 3rd on the leaderboard.

These kind of events are always a good place to catch up with some of the other great guys I write alongside, with Ryan from F1Times, Mike from GPUpdate, Dan from RichlandF1, Phillip from F1Zone, Ben Sweeney and Craig and Adam from BadgerGP all in attendance.  All of us were to be placed in the same group and on track together later in the day, so both the excuses and posturing began instantly.

I'd turned up with my own Infinti / Alpinestars gloves (given to me by Infiniti as a prize) and helmet which didn't go down overly well with the others as it was a clear sign I meant business ;).  As we were all ushered off into the briefing room to watch a safety video Dan Ricciardo once again appeared in front of me, gesturing Ryan through the door ahead "after you" before jokingly snubbing me with a talk to the hand gesture "but not you" with a wry smile and cheeky wink.

You can't help but be drawn in by Dan's infectious smile and personality, he's the type of bloke you'd sit and have laughs with down the pub and wonder where the night had gone.  The video was presented by none other than Martin Brundle, which went down well with the Sky team who took their opportunity to get in a few jibes at his expense. 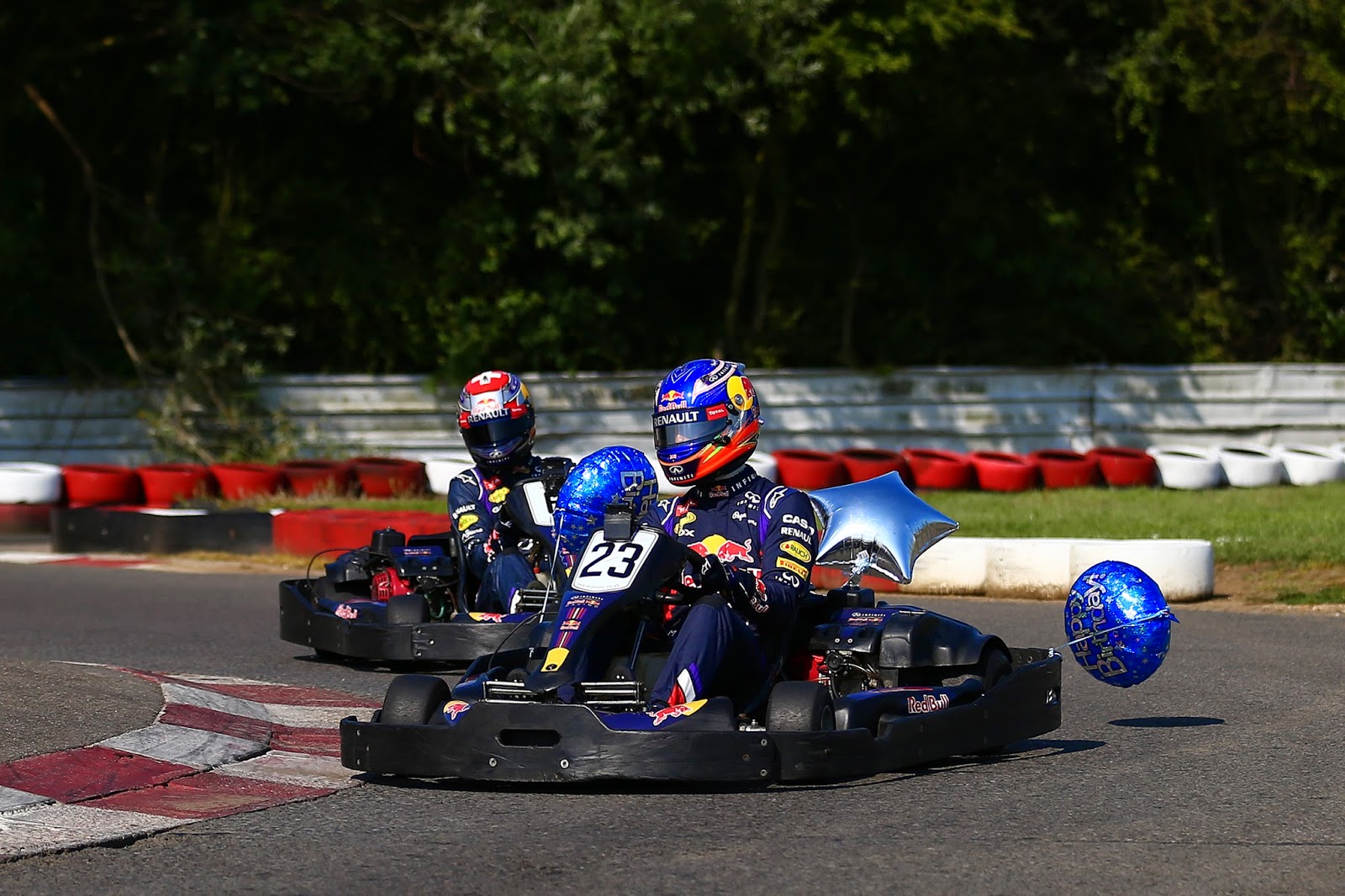 With the safety briefing over and done with it was down to business with Dan and Sebastien trading times and track space for the first 30 minutes, as you'd expect they looked quick whilst still joking around.  As it was Dan's birthday he had to suffer the comedy balloon attached to his kart, which surprisingly clung on in there all the time he was out.  (I'm sure he'll blame this on his time gap to Buemi) 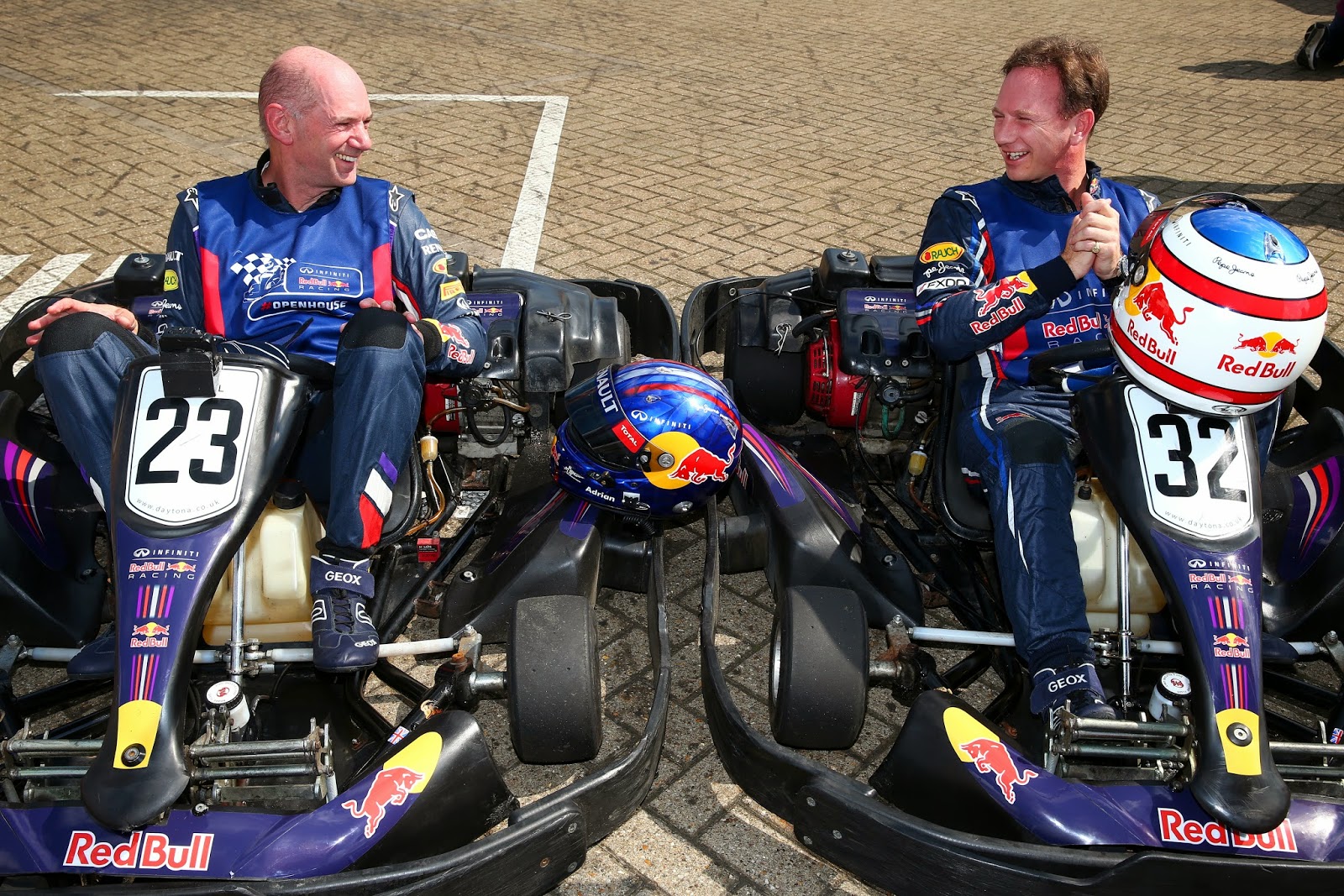 Adrian and Christian then went out with the boys from Sky (Crofty, Ant Davidson and Ted Kravitz, I'm quite sure there will be a mini feature on the Sky F1 show this week about this, as they had cameras dotted around) in the second session and then out with the National media for the 3rd group. 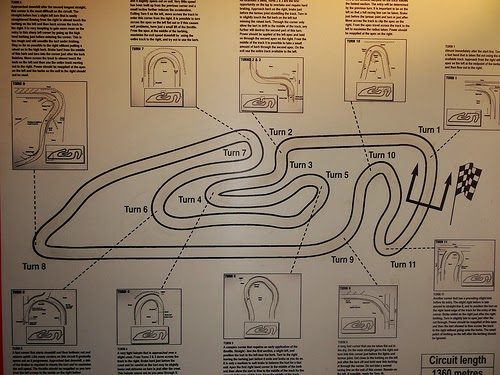 As you can see from the layout above the track is a challenging one with several very high speed sections that require concentration in the braking zones.  Sebastien Buemi was on hand just before we jumped into the karts to offer some words of wisdom, advice I tried to carry out onto the circuit.  The two that stuck with me were "You are completely flat from the exit of turn 11 until the braking zone for turn 2" as we all stood there looking at turn 1 it didn't seem altogether achievable, he said "don't get me wrong it seems like you can't but you just have to go for it from lap 1".  That was all the encouragement I needed... He also remarked that the guys in the safety briefing had mentioned that turn 9 was flat "It can be carried flat, but you'll compromise your line and braking for turn 10 if you do" he then remarked with a I shouldn't be saying this but will anyway wry smile "in the corners you'll find that you have the tarmac, a small patch of concrete and then the kerbs" (we'd been told to stay off the kerbs as they cause damage to the karts and slow you donw) "use that concrete as the apex, it's amazing how much time you can get if you get it right" all wise words that you must heed when coming from a professional racing driver.

As I jumped into the kart I tried to not only focus on the task at hand but try to remember the advice we'd just been given.  I've always had a bit of softly softly approach for the first few laps in the past, just to get my eye in, however Buemi's parting words were "Be aggressive on the tyres, they're very hard and take some time to warm up".  I decided to bin my usual approach and throw everything at it from the get go, getting the tyres upto temperature and hopefully giving me a performance edge.

The pitlane exits into turn 2 which for some reason was a corner that kept catching me out as no sooner have you flicked left your faced with the right hand of turn 3, as it's off camber it sucks you into a shallow line at the apex of 3 and there goes a few tenths.  The approach to the turn 4 hairpin is interesting as the undulation of the track starts to come into play as the circuit dips away from the apex, I found a late turn in gave a better exit toward the multi apex turn 5, another little tricky complex that could have the rear end squirming around if you were too ambitious with the loud pedal or a little greedy in the first part of the sequence.  Turn 6 is another of those that can catch you out if you try to take it flat, which is viable, but it compromises the entrance to the turn 7 hairpin as you drop through the middle of the corner and then rise again for 7.
The exit of turn 7 features a nice bit of rumble strip concrete that bounces the kart around and if you're not careful could suck you onto the grass.  The run down to 8 features a declining left-right kink that means you find yourself braking whilst finishing the right hand movement, whilst looking for the left hand apex.  The back straight is up hill with 9 blind as you initially round turn 8, all the while in the back of your mind you're weighing up do I listen to Buemi's advice and back it off a little or just nail the pedal to the floor?  Of course a few laps in and the devil on my shoulder tells me to have a go flat, I get it done and turned into the apex, it's not as rewarding as I'd like though as I feel it's compromised my exit and left me a little wide approaching 11.

A few laps in and I have a grin the size of Ricciardo's, I was taking (most) of Sebastiens advice, riding the kerbs etc and I could tell I was fairly quick as I was starting to lap a few of the other guys.   My reward for this moment of over confidence is me being greedy in turn 9 (flat out) and even greedier on the brakes into the turn 10 hairpin, which results in me spinning and heading backwards.  It's not a new experience for me, I always find that if I haven't had a spin in a session I wasn't trying hard enough to find the limits.

With the session over, feeling like it had only just began we headed into the pits and disconsolately walked over to the timing screen, all fearing we had done much worse than we anticipated.  I was pleasantly surprised to find myself with the quickest time of our session and only a few seconds off the pace of the pros. 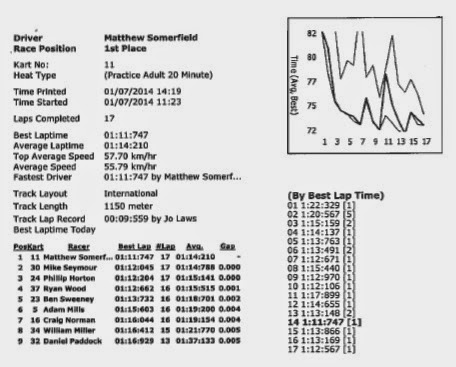 Not bad I thought, I've held my own, however later in the afternoon I noted that the screens inside were also showing the top 10 drivers across all the sessions and to my surprise I was tenth. 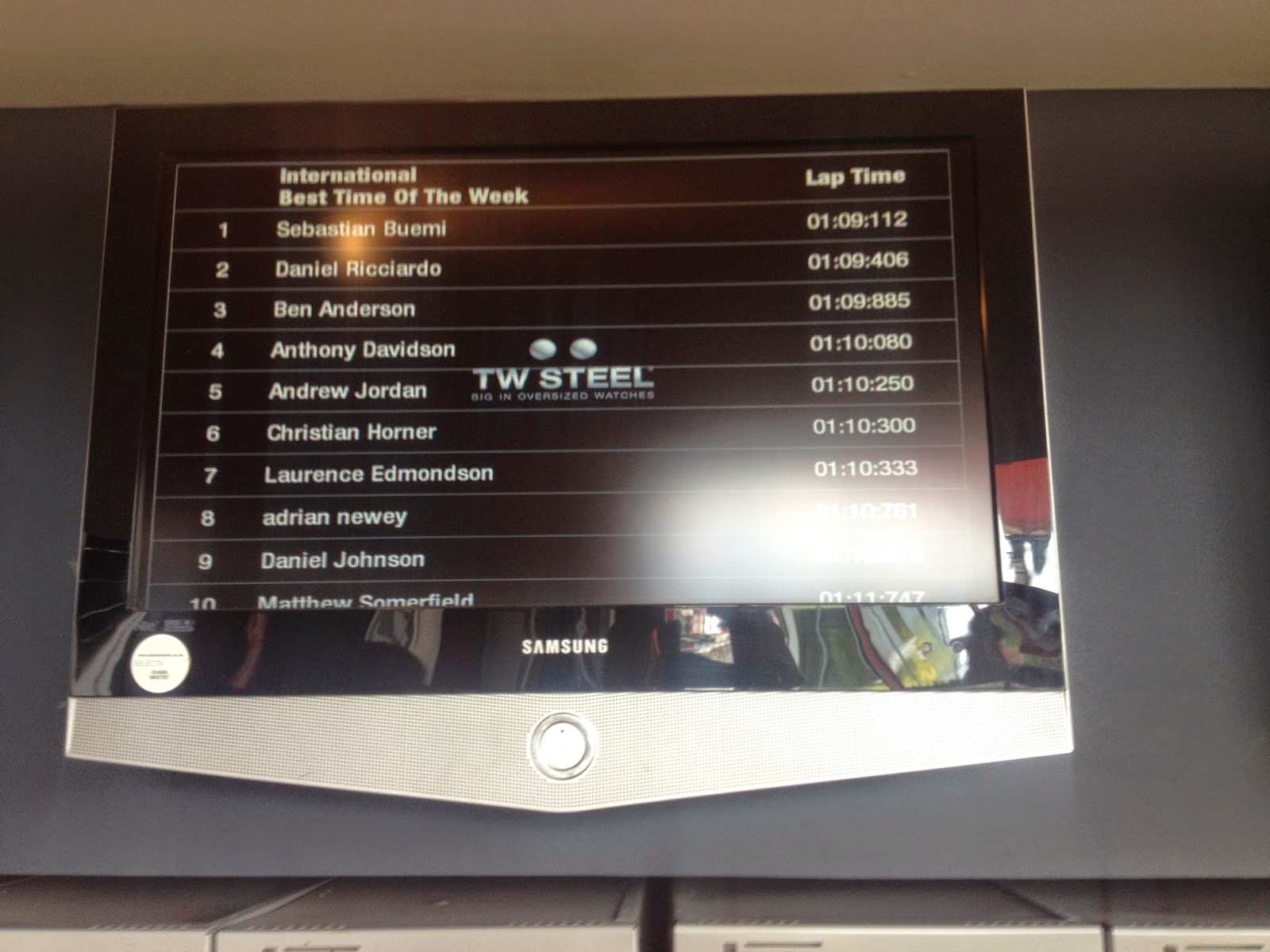 On reflection I'm still 2.6 seconds slower than an F1 driver so I won't be expecting a call up from Red Bull any time soon, although having now been to the circuit I'm quite sure I could improve on that time if I went again.

Our afternoon was taken up by some media sessions with Daniel and Christian an area that I really must improve upon as the seasoned pro's took up all the question times whilst I tried to butt in unsuccessfully.  I wouldn't mind if they asked questions that we hadn't already got the answers to, but the answers at least provide the bylines for any reports they had to write.  The questions posed to Christian did circle around the powerunits but they didn't cut to the bone, I wanted to find out about the possible acquisition of Viry or at least the shift of manpower/resources that Red Bull will be sending that way...

My only disappointment of the day was that I didn't get to speak to Adrian, at one point I stood next to him before he went out on track but the opportunity didn't arise for a conversation.  Whilst as I came off the track and went into the media sessions the opportunity once again expired, another time maybe.

A fantastic day for myself, tying together the opportunity to kart whilst enjoying the company of the boys and girls from Red Bull.  I have to thank the great job that Katie etc did and can only imagine how the fans that had the opportunity in the afternoon to meet Daniel, Sebastien, Christian and Adrian could feel, a rare opportunity for fans to meet with members of the sport, up close and personal.

I'd thoroughly recommend a trip to Daytona, I'd heard over the years that it was a great track and it didn't fail to impress.  If you're ever on the Isle of Wight give my local track a go too (Wight Karting) the guys have invested a lot of time and money into providing a great venue and if you give me enough notice I'll also pop down and give you a race....
Tagged
Newer Post Older Post