If you're a regular visitor to my blog you may have already read my piece comparing the PowerUnits and setting the record straight on several inaccuracies that we're being purported at the time (mainly in regards to the Mercedes PU).

For this article however I've drawn up some visualizations in order to show you just how different the PU's are in terms of each manufacturer.  Please be aware although I've done my best to help you visualize the differences obviously these images aren't mm perfect and are to be used as a visual guide only. 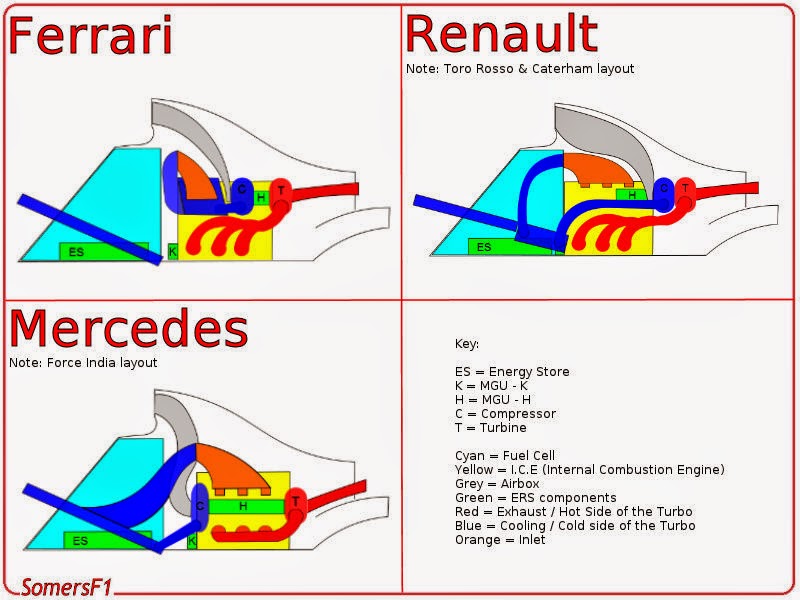 As you can see from the overview there are plenty of differences.  These will obviously have an effect on the way each PU is able to produce power and the impact it has on chassis design too. 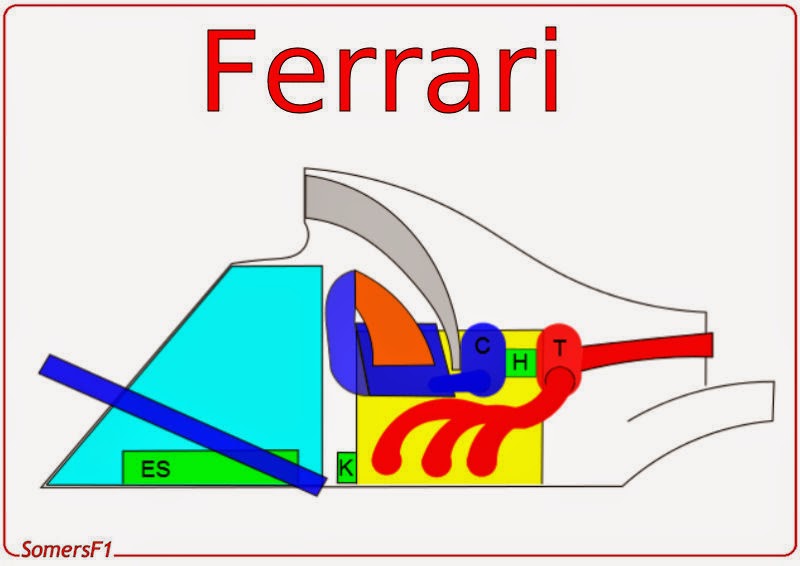 A few things were left to speculation up until the Monaco GP and images came out that showed us the elements where we expected them to be located on the 059/3.  Like Mercedes, Ferrari have opted to place their MGU-H between the Turbine and Compressor in the engines V, affording them more space over the gearbox for ancillary components.  (The physical space between the V however could have hampered their compressor sizing)

Ferrari have opted to run an exhaust with elongated runners that converge in a collector just ahead of the Turbine, where a large bore wastegate arrangement is also located.

You'll note a blue box is also placed both horizontally and longitudinally through the front of the V, this is their Air-to-Liquid-Air cooler (chargecooler) which allows for very short boost pipework as it leaves the compressor.  Furthermore as the boost needs to make its way back to the engine for combustion we see that they have an elegant U shaping to the cooler which splits into two, feeding inlet chambers on either side of the V.  The cooler (air-to-liquid-to-air) is kept cool by another water radiator which is housed in one of the sidepods.  Ferrari and their customers all run the same powerunit (Sauber and Marussia) and although some of the ancillary components like radiators will differ (based on each teams packaging considerations and aero needs, as such Sauber run their sidepod coolers vertically), essentially the core elements like their longitudinal centreline chargecooler are used by all three teams.  This parity between the Ferrari powered teams is also seen by the teams in terms of fuel, with all three teams supplied by Shell albeit with the works team having favourable treatment due to their close knit ties to the fuel maker. 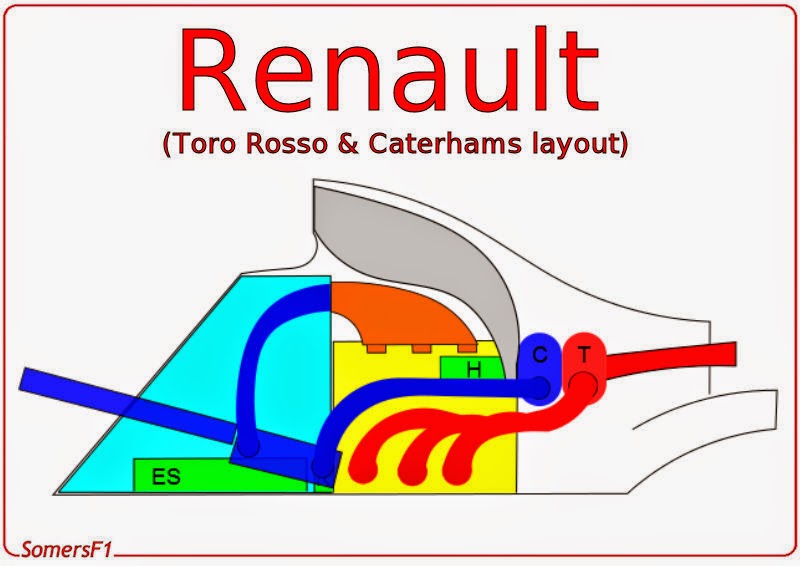 In terms of the Renault powered teams you would have to split the designs being used into several categories as without a defacto 'works' team elements of the powerunit are left to each team to make decisions upon (Plumbing, like the boost pipework and exhausts being free from the homologation process).  Although both Toro Rosso and Caterham have gone about packaging and sizing of items in slightly different ways the actual physicality is fairly similar, both have opted to use an exhaust manifold that travels vertically wrapping around the ICE toward the turbine.  Whilst the boost side of things is taken care of by air-liquid-air coolers (chargecoolers) placed in the Sidepods with an associated radiator used in tandem.  The Turbo (both Turbine and Compressor) is placed behind the ICE leaving the MGU-H to occupy the space left over in the V.  This layout allows the teams to place the engine much closer to the fuel cell, whereas Ferrari would have to scallop out some of the fuel cell to achieve this. 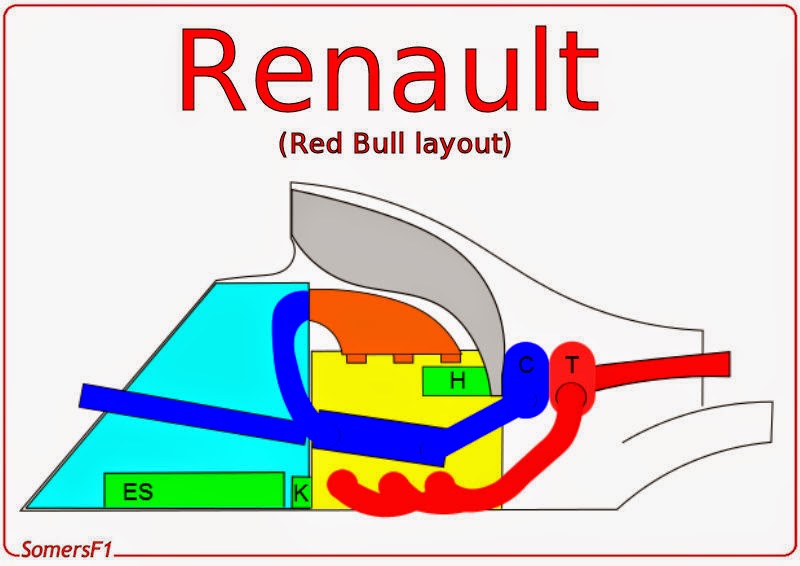 In comparison Red Bull have opted to enhance the aerodynamic profile of the Sidepod by flattening out the coolers.  This also required the team to use a different exhaust design with the exhaust protruding width wise under the air-water-air coolers.  This also shortens the pipework with the cooler sitting between the compressor and inlet.  The compromise is of course that packaging is extremely tight (when isn't a Newey designed car).

Lotus have opted for a halfway house solution, standing their coolers vertically shortens the pipework and allows them to run an exhaust design that fits somewhere between the other Renault runners, plausibly giving them some additional performance advantages.

All of the Renault powered teams are supplied fuel by Total and are working even closer with them and Renault this season to make gains on the Mercedes powered teams.  Fuel is a critical aspect of this compound charged formula.  Fuel consumption is also a critical factor with fuel weight accounting for tenths of a second out on track, creating a see-saw between having more to burn for increased power vs carrying less weight and therefore reducing lap times. 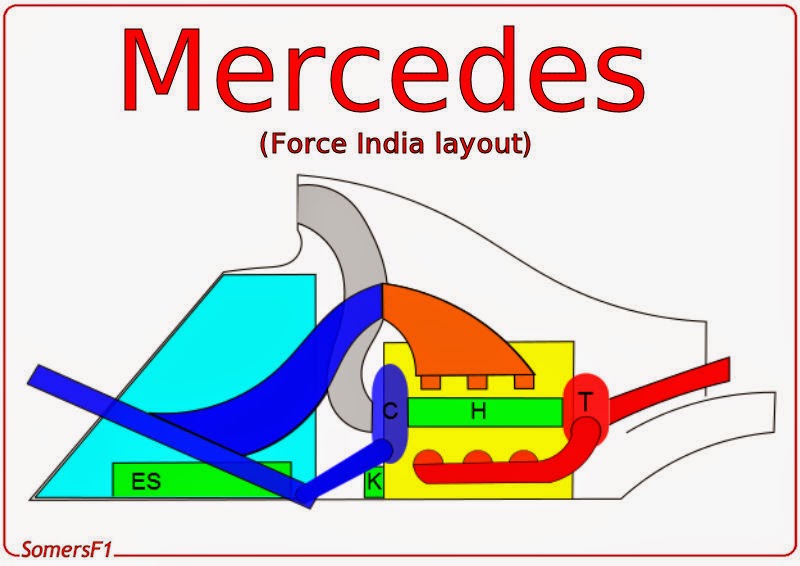 At this point I thought I'd just point out once more that these images are only to give you a guide, as you can see there is plenty of daylight between the fuel cell and engine in the Mercedes images that wouldn't necessarily be there in the flesh.

As we already know Mercedes have placed their MGU-H in the engines V with the Compressor and Turbine placed either end.  Pictures of the Compressor show just how large it is, but as yet images of the turbine have been a little elusive, even though I expect it to be similarly sized.  All of the Mercedes powered teams are using a 'log' manifold, which will have negligible effect on performance but comes with the advantage of creating much more space within the sidepods.

As we can see from the image above, Force India have chosen to use an air-to-air cooler setup in the sidepod with a similarly sized engine radiator in the other sidepod.  Bare images of the Williams FW36's setup are still sparse but I'd suggest they run much the same setup too. 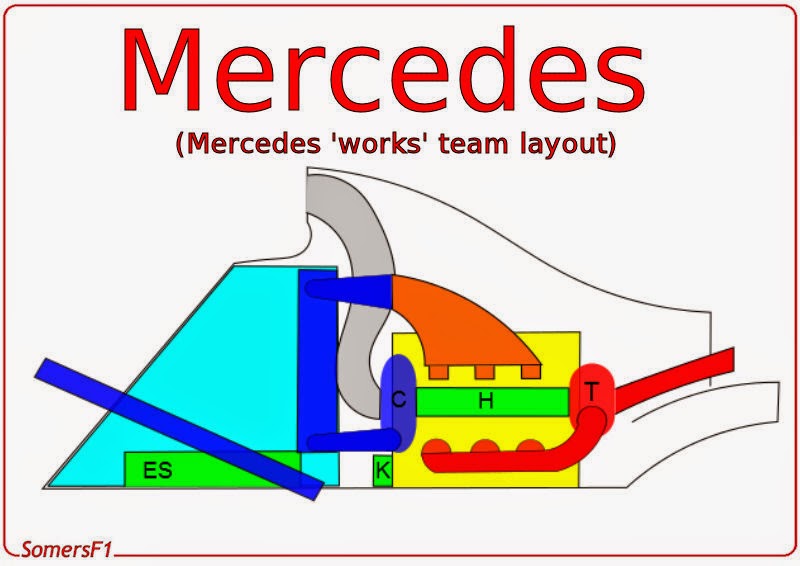 The Mercedes 'works' team had the advantage of working directly with HPP as the project unfolded with both giving input that would eventually lead to the performance advantage we've seen them carve out at the track.  Intrinsically they have the same powerunit as the teams they're supplying but with the advantage of the data/equipment in advance they were able to correlate their chassis performance with the powerunit.  The 'log' manifold I've already mentioned is just one such case of these advantages with the car designed to suit it both architecturally and aerodynamically from the outset.  You'll note that the other Mercedes powered teams with the exception of McLaren (I'll cover them shortly) have made alterations since the start of the season to accommodate the change that Mercedes HPP announced just ahead of pre-season testing.

This joined up thinking is also present with the way in which Mercedes have installed their cooling options for the W05 with an air-liquid-air cooler residing somewhere within the area also occupied by the fuel cell (note I've placed it vertically in the image above but it may reside in another orientation, with the way fuel drains off and centre of gravity affected by this too), a shrewd option but one that will have clearly needed the assistance of their fuel supplier Petronas to provide them with a fuel that is able to regulate not only its own temperature requirements but those of the air-liquid-air cooler without causing major peaks or troughs in it's temperature.  (It's worth noting that both Force India and Williams are using Petronas fuels this year too but their grade is likely somewhat different, Williams will move to Petrobas in 2015 I believe, due to their partnership with the team and Felipe Massa).  The air-liquid-air cooler requires an additional water radiator which resides in the W05's sidepod.

Just some food for thought, conventional wisdom would have the chargecooler placed outside of the fuel cell, but imagine if the liquid component were the fuel, with the core submersed in the bottom of the cell.  This would of course have huge ramifications on the fuel itself (including temperature and performance) and make the nightmare job of fitting a fuel cell/bag tank into the chassis even more difficult but it could have several upsides too.....

McLaren's design decisions were lead by information given to them and subsequently changed just before the start of pre-season testing (log manifold).  The original decisions led to the team having substantially bulkier sidepods than the other Mercedes powered teams and most likely drove their decision to stand the coolers within the sidepods vertically.

The log manifold left the McLaren sidepods with somewhat of a large area of free space and has probably had both cooling and aero ramifications that the team hadn't initially accounted for.  In order to drive performance forward we will likely see a heavily revised package for Montreal or Silverstone, if we don't I suspect the Woking based squad have simply written off 2014 and will concentrate on their new partnership with Honda for 2015.  It's also worth noting that McLaren have their lubricants including fuel supplied by Mobil 1 which could also offer some indication as to the performance offset between fuels.
Tagged
Newer Post Older Post