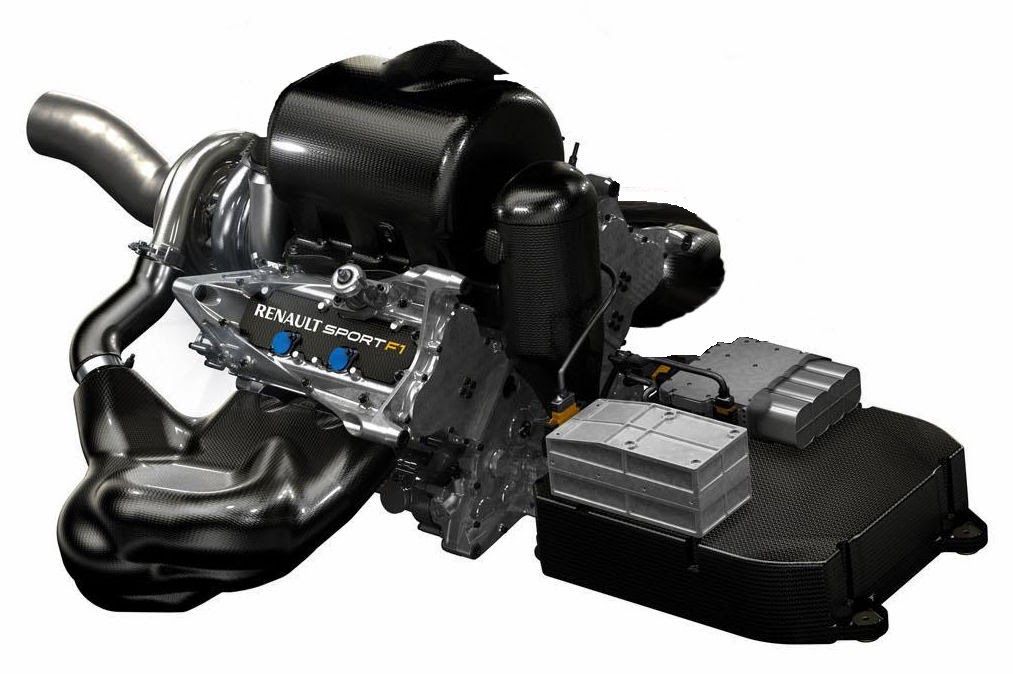 Powerunits have of course been a hot topic in 2014 as they're at the centre of the one the largest rule changes the sport has ever seen.  As expected one of the engine manufacturers has nailed it, leaving the other manufacturers in their wake and on the end of the some criticism from those they supply.

The regulations allowed plenty of scope for innovation and due to this there is always the chance a large disparity in performance can arise.  Many have talked about Mercedes unique split turbocharger being the silver bullet and although it's a contributing factor it is not the be all and end all of their success (as I've explained here: Comparing powerunits, understanding early season issues and the real reason why Mercedes AMG F1 are ahead and Powerunit Architecture)

I think it's important to break down the disparity into 4 major groups:


Going forward these will be key to the maturity of to each of the manufacturers powerunits, creating performance that differentiates them from one another.  Mercedes seems to have aced all of these aspects when compared to their rivals but going forward things will undoubtedly change.  Unlike the homologation regulations used to freeze V8 development the manufacturers can make widesweeping changes for 2015.  The idea is that the manufacturers can remedy any errors they initially made with the amount of changes reduced year on year.

In terms of 2015 then, 8% of the 2014 powerunit must be carried across (upper/lower crankcase, crankshaft and air valve system) of the remaining 61 weighted modifiable items 32 of these can be changed or altered (or 48% of the powerunit).  This then makes life extremely difficult if you've made numerous errors in the powerunits infrastructure, especially as from a power production point of view so many parts share a symbiotic relationship.  Furthermore for 2015 the regulations permit variable length intake trumpets and with Honda entering the sport this will undoubtedly be an area that the other manufacturers will have to concentrate on.  The scope of variable length intake trumpets performance may not be as large as it would be if we still had naturally aspirated engines but it could still play a significant role in helping to produce power.  It's simply another element that can help in the search for efficiency with the MGU-H's role in
reducing turbo lag being reduced too, giving the MGU-H further utilization elsewhere.

This brings us to the situation that Renault Sport find themselves in, having had 4 consecutive championship years their 2014 powerunit has underachieved.  Their main customer, Red Bull Racing are most concerned as they feel they've produced a chassis capable of winning a fifth consecutive title but can't reap the rewards of it.  It could be argued that the development of this years powerunit was behind as they continued to push development but perhaps the largest failing has been their standalone approach.  Not being a chassis manufacturer has perhaps hindered Renault the most, not able to install their unit in a chassis until late into development has led to some interesting issues for both Renault and those they supply.

Red Bull are making several noises but key staff members like Christian Horner have been quick to rebuff any claims they'll build their own engines.  However it's easy to suggest that we could see Red Bull erring toward owning Renaults factory in Viry in order to both restructure and rename the powerunit.
They've already started funneling staff, resources and cash toward the project to aid their waning campaign whilst also improving their chances for 2015.
On the face of it that might all seem rather romantic, Red Bull swooping in to assist but there is an underlying agenda.  A wholesale purchase/renaming of the manufacturer could allow them to circumnavigate the homologation regulations and supply the FIA with a new unit, although they'd also have to get this by the other competitors (Mercedes and Ferrari) too who can veto .  They'd be best placed to do this for 2016, using 2015 as a test bed and allowing everyone the time and resources to start from scratch.

Some of the dominoes that need to fall have begun to cascade, with the sale of Caterham F1 team leading to Cyril Abiteboul making the switch back to Viry in an attempt to re-ignite the glory days.  It's going to be a long old road for everyone though and require some serious commitment from the Red Bull teams in assisting Renault.  The chassis test that Toro Rosso conducted at AVL in Graz, which many speculated was illegal, until such point they realised the regulations approved of such activities and both Mercedes & Ferrari had been conducting such tests already, was the first step in the right direction.  Garnering this type of data will be crucial to Renault who without a doubt are behind the curve.  I'd be surprised if Red Bull/Renault haven't already concluded they need something on the chassis dynamometer 24/7 for the foreseeable future, with the it able to produce / re-produce results that might not be viable on a normal dynamomter.

The other viable option for Red Bull is to invest in a tandem development plan with a manufacturer that has a design on the table and has continued to commit (albeit at a reduced capacity) resources to it in terms of R&D: Cosworth.  This of course could be both hazardous or revolutionary to Renault as the transfer of data, resources and IP (Intellectual Property) could either resurrect their programme or spawn a new competitor.  The gel that holds all of these companies together could be Infiniti, with Cosworth working alongside them on some performance components in the past.

Something is clearly afoot based on the other rumor doing the rounds that Lotus have been tapping up Mercedes for the space cleared by McLarens move to Honda.  Lotus signed upto a multi year deal with Renault at the start of 2014 and so either they're activating a performance clause or one or both parties have issues with the payment situation.  Lotus have been dying to reactivate some form of 'works' status with Renault in order to lower their costs and gain an advantage, but with a much closer alliance to the Red Bull teams this would become impossible.  Red Bull getting into bed with Renault would clearly be an issue to Lotus, Caterham not so much as they already purchase their gearbox, suspension etc from Red Bull Technology.  This could have also activated any clauses in the Lotus/Renault contract and with their powerunit being the most expensive on the grid I see no reason why they wouldn't re-evaluate their supplier.

Whatever way they go about it Renault has some issues to address and I'm not sure they can make the deficit up (and the extra they'd need to make up for the changes the others would make too) with the changes allowed for 2015 and meeting the homologation rules.
Tagged
Newer Post Older Post