Ferrari's on/off approach means that we often see the team try things that either get thrown into the parts bin never to see the light of day again, or flip flop between configurations until it's finally decided one is marginally quicker than the other.  That's the thing with Formula One, we are dealing with tenths or hundredths of a second, the margin between one component offering performance sometimes isn't as tangible as simulations predict.  Ferrari have been living this hellish situation for several seasons now and thought they'd turned the corner at the start of the season when they re-opened their wind tunnel at Maranello.  I'm yet to be convinced though, the rate at which parts are placed on the car to have their performance to be ratified yet the old part still raced is staggering.  They clearly have an offset somewhere between their CAD/CFD models, scale wind tunnel models and the full blown parts, until they find this they will continue to languish behind their bitter rivals.

Looking more outwardly though we must also consider that perhaps the steps just aren't large or fast enough when compared with their rivals.  Currently when Mercedes or Red Bull bring new components, more often than not they test it, the results correlate and they race the components.  The one foot through the door approach from Ferrari leaves them several paces adrift but also means their rivals edge a little further away as they dilly dally.  I often wonder why they don't have the conviction to proceed with parts even if they don't seem to give the performance gain they should show.  This probably lies within the offset between qualifying and race setup, with the team playing devils advocate as they try to either retain grid position or think of their race pace.

In Monza the team deliberated over a new diffuser design, which featured a change to the central portion an area that has seen revision earlier in the season. 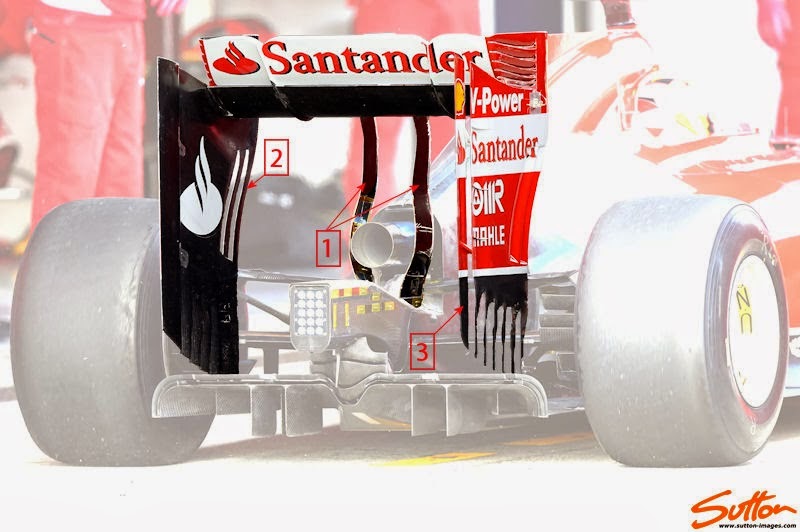 Above: The F14T's central portion of the diffuser featured a lowered section that allowed the floor to interact with diffuser earlier on in the season. 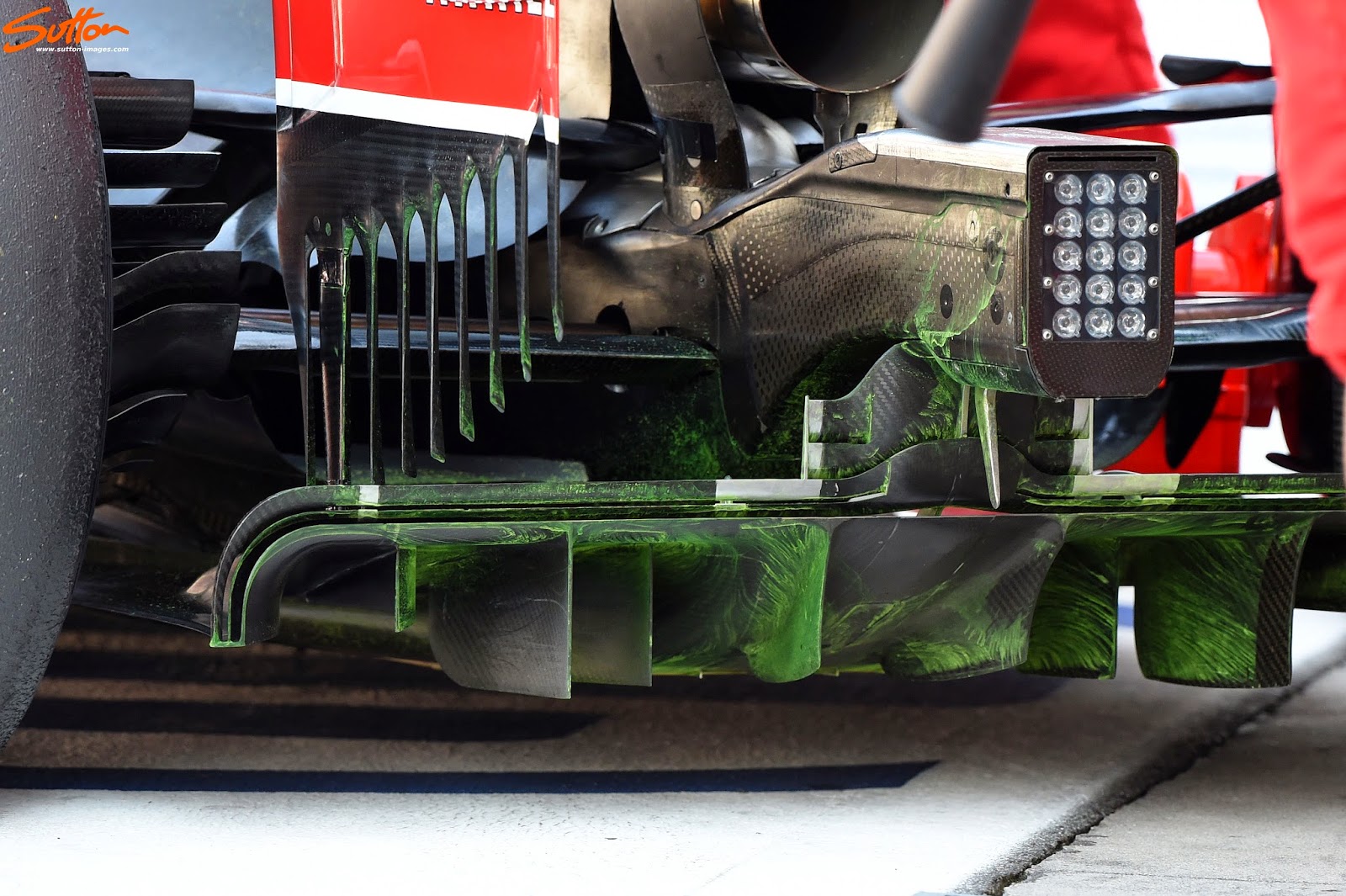 Above: The diffuser that has been in use since features a more aggressive central angle of attack (steeper) with the uppermost section running inline with the rest of the diffusers upper surface.  The upshot of which will be more of a peak downforce bubble and a more aggressive interaction with the airflow structures above. 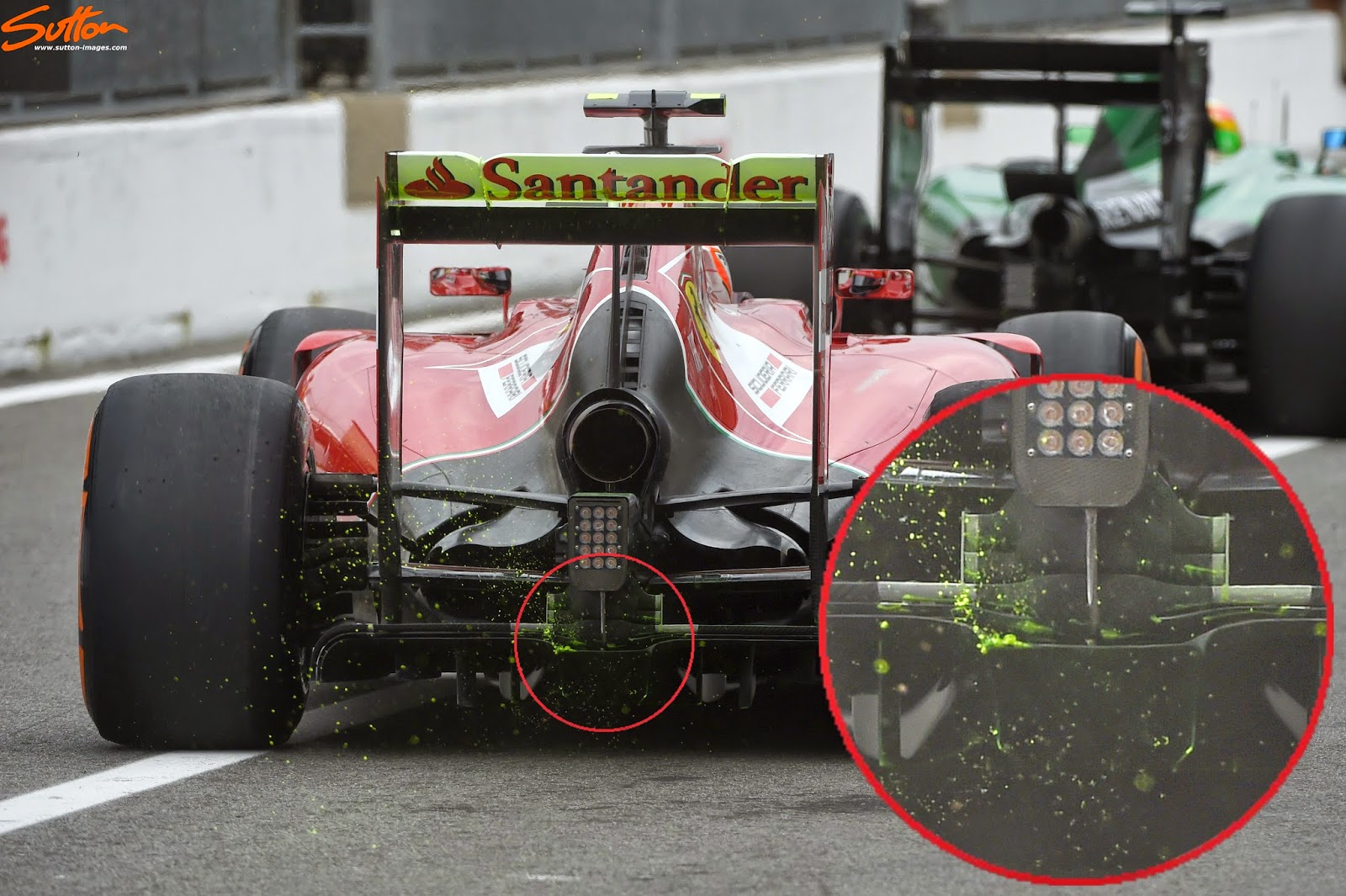 Above: The diffuser tried in Monza was more of a halfway house, retaining most of the AoA in the central section, with the curvature along the top edge allowing the floors flow structure to interact differently.  I'd suggest that the team were trying to soften the connection of airflow structures, in an attempt to reduce drag at the compromise of some downforce/balance.