Formula-E: Is the future here?

So, Beijing provided the backdrop for the first all electric single seater race, was it all it was cracked up to be? What was it cracked up to be? No, they're the wrong questions, the question should be: What will it be?

Formula-E is a brave step forward, one that arguably needs to be made in order to retain not only the future of Motorsport, but also pave the way for our own electric transport revolution.  It's far from perfect but it's here and it's making a statement!

For those of you that have been following this blog since the early days, you may have already read my initial piece on F-E 2 years ago.  The piece centered around the release of the original regulations looking more at the technicality of what was applicable at the time.  From a commercial perspective though, it was pretty obvious that for the first year at least, it needed to be a spec series.  With Alejandro Agag at the helm they swiftly went about organising just that, and we find each of the 40 Formula-E cars supplied by a plethora of well known Motorsport entities.

Known as the Spark SRT-01E the car has a thoroughly Formula One DNA, that's because we have names like Renault, McLaren and Williams associated.  Dallara were tasked with providing the chassis' as their vast experience speaks for itself, providing chassis to the likes of Indycar, GP2/3,WSR, Formula 3, Super Formula and many many more.  The problem faced by Dallara was that the design needs to be efficient, producing the least amount of drag is critical to overcoming one of Formula E's biggest issues: battery life. 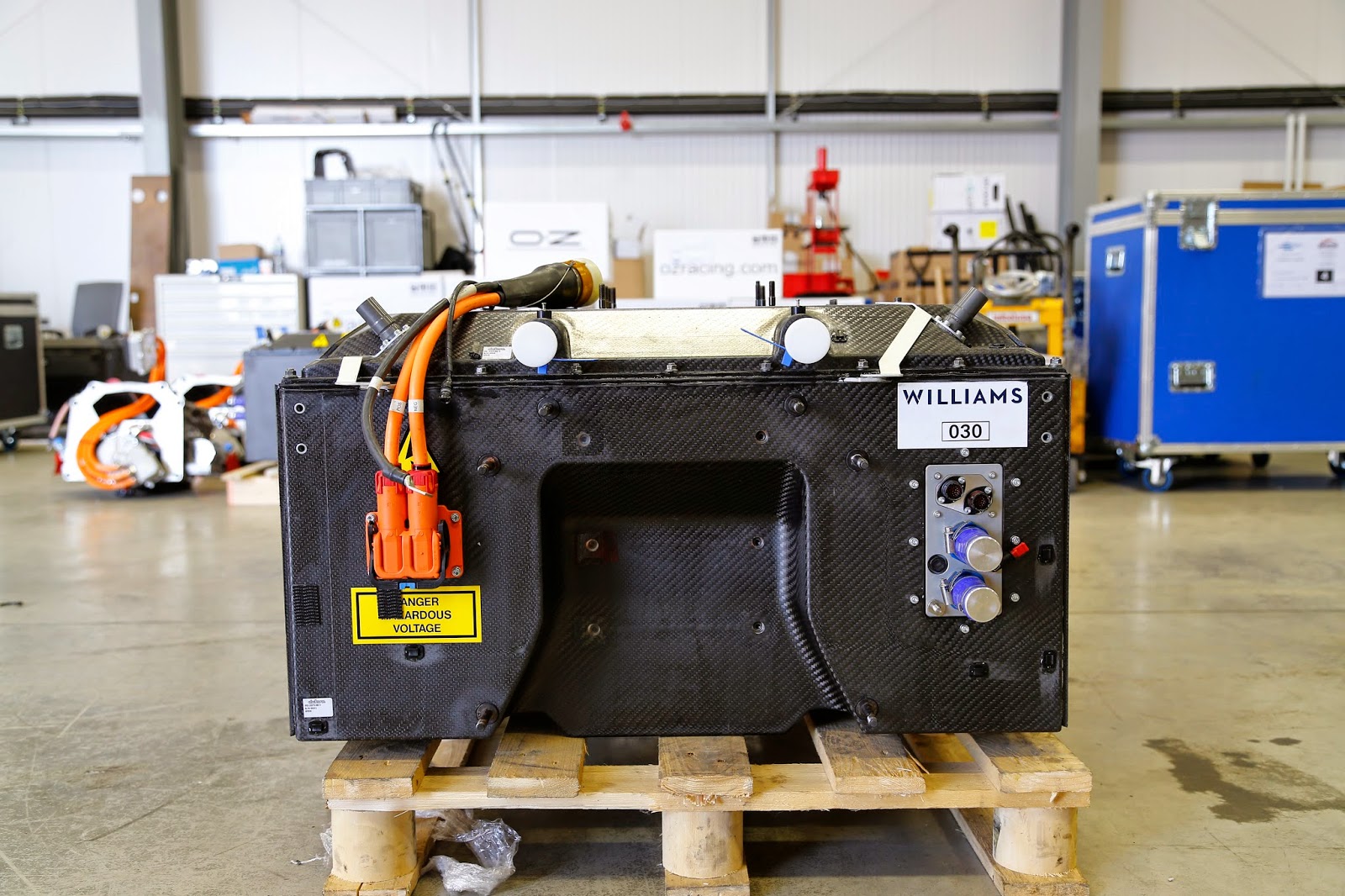 The battery pack onboard each of the SRT-01E's is supplied by Williams Racing's advanced engineering arm, positioned ahead of the MGU(s) in the fuel cell's nomal locale it must provide enough power for at least half the race distance.  Unlike F1 teams that are allowed a maximum of 5 ES (energy stores) per season before penalties, the batteries placed in each chassis must last all season (10 rounds).  Furthermore their weight is just 200kg's and they need to provide a maximum of 200kw (Free Practice & Qualifying), which can propel them toward the maximum top speed of 140mph.  Williams Advanced Engineerings initial task was made even more difficult, as they had to work within the parameters already set out for the battery pack.  It's size and cooling prescribed by the layout left by the Dallara design.
McLaren were bought onboard to provide both the electronics and the MGUs (Motor Generator Units), the latter a product of their work from their roadcar, the P1.  The MGU not only provides the method of propulsion but just as we are used to in F1 can be used for harvesting energy under braking to be stored and then used later in the race.  Coupled to this we find a Hewland 5 speed sequential gearbox, used to increase efficiency (meaning the motor can be geared beyond 1:1). 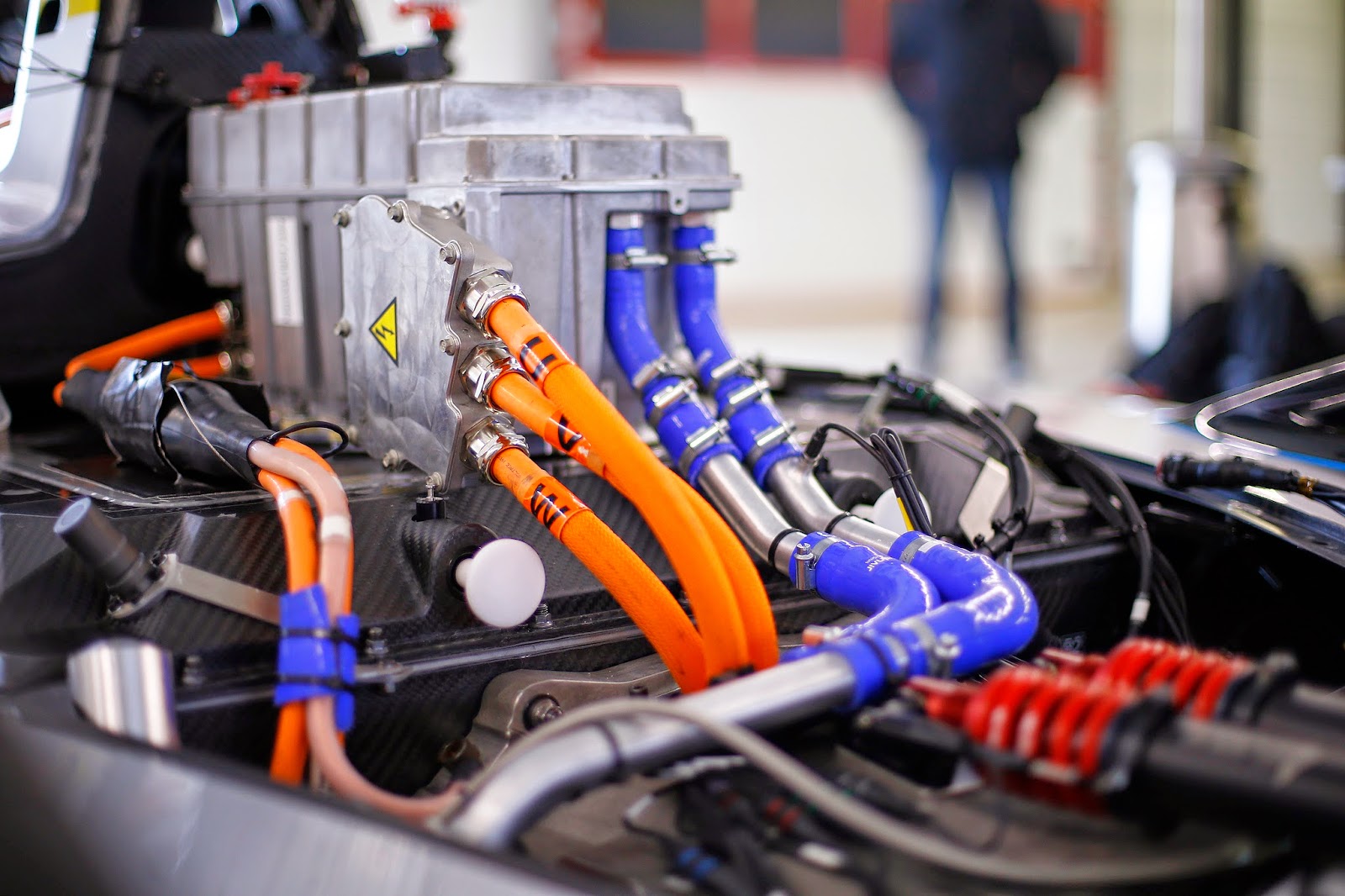 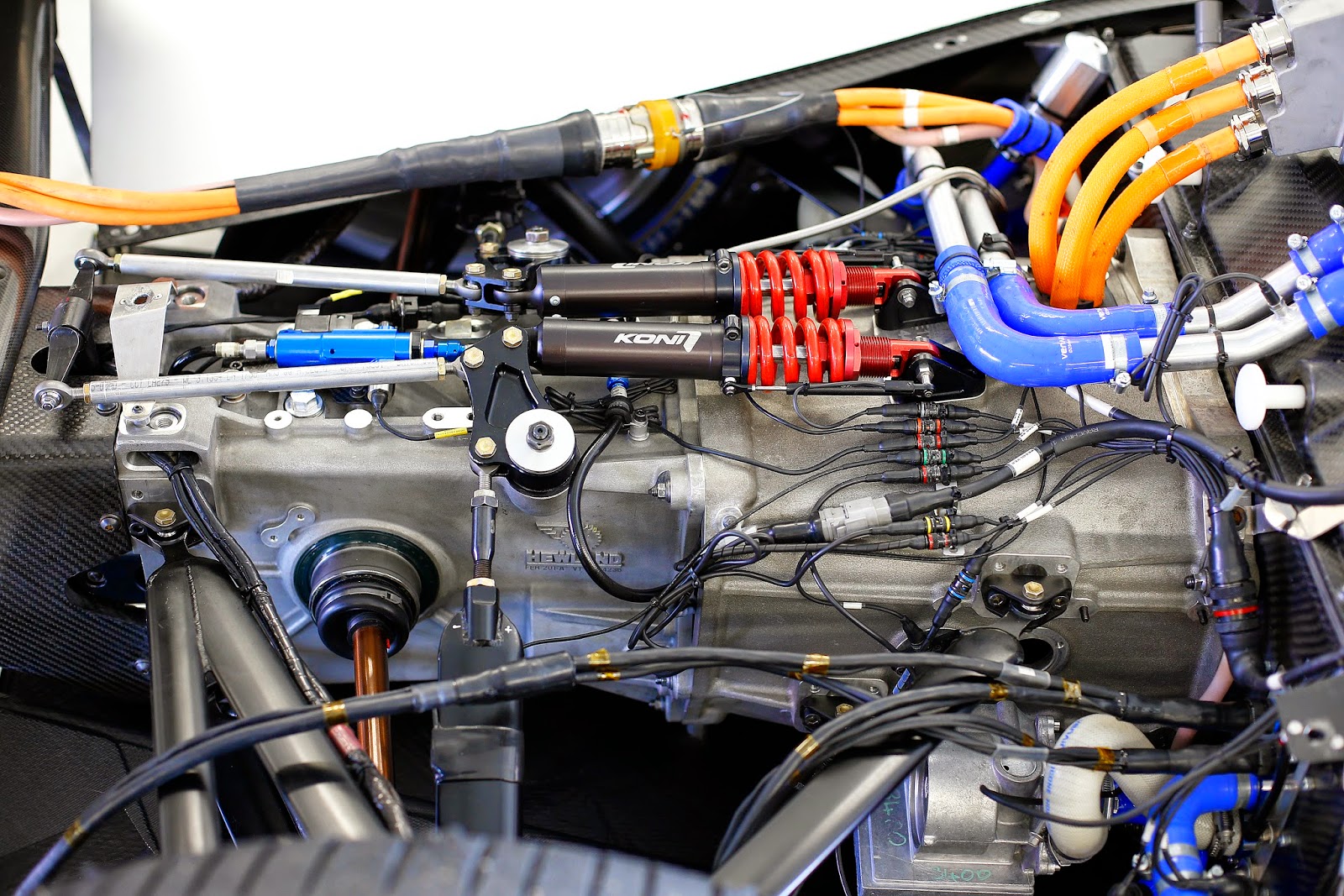 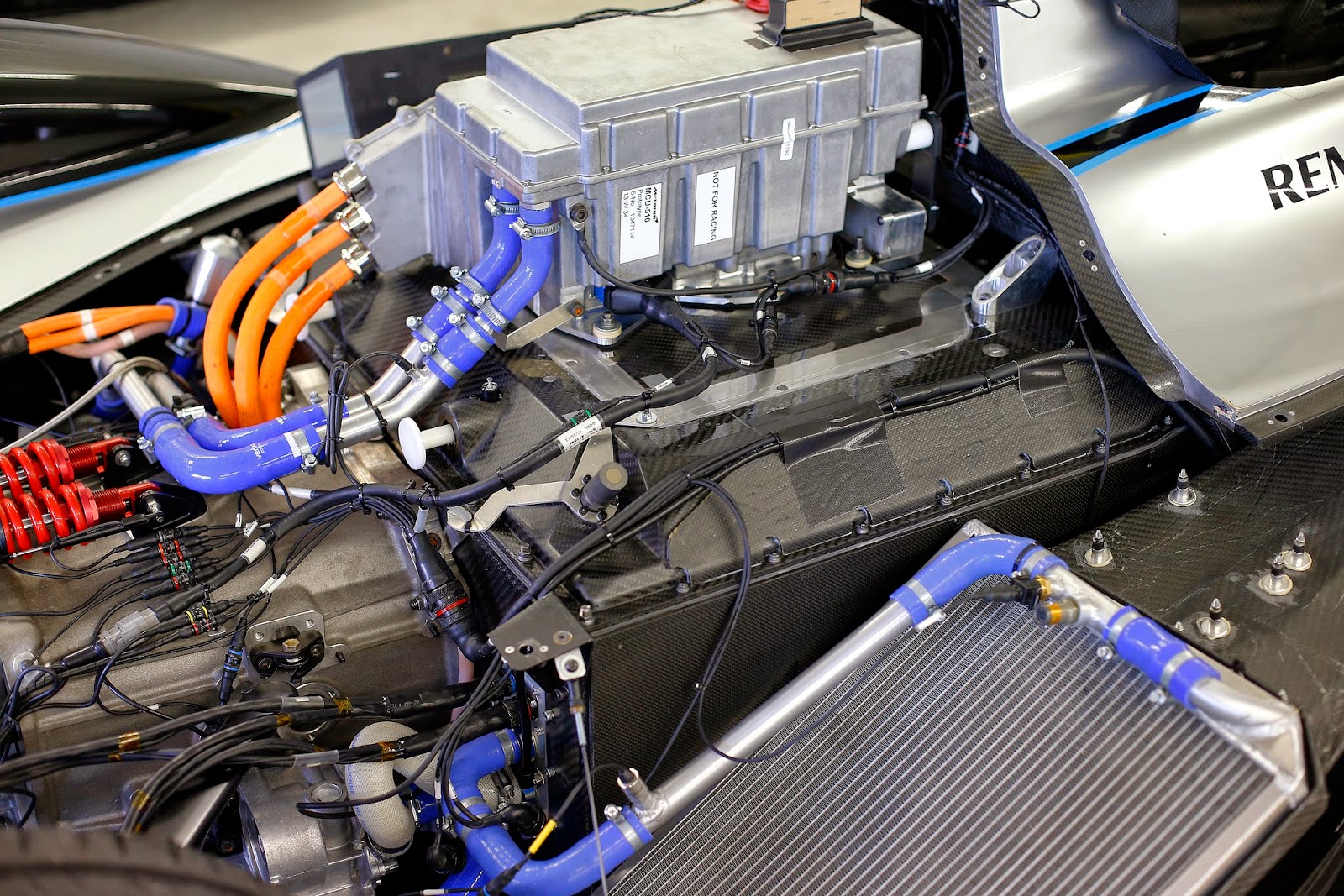 18" OZ wheels are shod in Michelin tyres, designed to provide performance in both dry and wet conditions.  Meanwhile Renault will provide support at the races passing on years of racing experience.

The SRT-01E is a good benchmark, it takes technology from different companies and transforms it into a product that will produce decent racing.  What comes next though is what excites me, this will require the big automakers to get onboard and drive the technology forward.  What is being learnt in this first year is merely a stepping stone to what can be achieved but it will require the bravery and out of the box thinking we have already seen to get the series this far.

To truly drive forward change and inspire people to drive EV's the series must be at the forefront of the technologies evolution.  Battery life is the biggest challenge to the adoption of electric vehicles and thus we must find better ways to harness it.  Electricity afterall is currently generated (mostly) be fossil fuels, the enemy at the gate we are trying to hide from.  Furthermore we have the issue of electrical conversion (AC/DC) which not only generates heat but expends energy as a consequence.  This is on of the issues of harvesting and then storing energy, with a power converter placed between the MGU and battery literally giving up energy.  Formula One has met this challenge quite well with their new Powerunit, utilsing both the MGU-H and MGU-K and allowing each to symbiotically power the other, without first storing the energy (a negligible power loss).  Another method that may have worked quite well is one that Williams looked at when KERS first arrived in 2009: Flybrid.  Williams have recently sold that arm of their business to BAE systems with the technology now being applied in buses etc around the UK.  The crux of the tech is to store the energy mechanically in a flywheel (friction isn't such an obstacle as you'd first think as a carbon flywheel is spun within a vacuum) for re-use afterward.

There are of course other ways to extend battery life, one of which Formula E can have an impact on: moveable aero.  Aero has already become more important than most people realise in modern car design, increasing performance and fuel efficiency.  The original regulations permitted moveable aero and I think it would be shrewd to allow it's introduction in future car builds, not only as it can be used to increase downforce and reduce drag (increasing performance/efficiency), but because it could also have a positive impact as it drip feeds down to the road car industry.

Frank Montagny had perhaps the stand out performance of the grid in Beijing and many of you will have noted he applied a slightly different technique to some of his collegues.  It's something I have been doing in road cars for years: Coasting.  Yes I know it's frowned upon, but you wouldn't believe the uptake in MPG I get by applying the technique (Coasting for the uninitated is taking the car out of drive, either by depressing the clutch or having the car in neutral, on declines).  Frank's approach is quite clever on several levels but mainly because it allowed him to settle the car pre harvest/re-gen whilst saving power too (an electric motor doesn't use rpm at all when the throttle isn't depressed, unlike an internal combustion engine.  Meaning you aren't using electricity).

Moving onto the sporting aspect I've often remarked on twitter that one of the downsides to Formula-E is their adoption of a mid race car switch.  As I've said before this could come across as highlighting the main issue of EV's: battery life.  However if promoted correctly it could be done as a way of re-educating people or indeed used as a way of initiating a new thought processes.  Most car journeys are done solo in cars capable of carrying 4/5 people, purely owing to peoples thought processes when purchasing vehicles and the possibilities that may entail a car journey throughout its lifespan.  Gordon Murray's thinking with his T25 is a prime example of out the box thinking but requires mass acceptance of a new way of moving.  Most of us only need a very small car to complete our day to day tasks and even then it sits unused for most of its lifespan.  To fully embrace a world where electric cars work for everyone, we need to stop owning cars and own a membership; connecting us like customers to a fleet of vehicles.  You might say that sounds like public transport, and in a way you're correct but this would allow for autonomy with a cost reflected by use.  Such a model/concept has many pitfalls/problems none more so than insurance but I believe it is the way forward, especially in the inner city; the exact place Formula-E is targeting with its races.

So is the future here? No, just like the hoverboard that Robert Zemeckis promised me would be here next year in 1989 it isn't quite here yet.  However, we must not be too quick to label Formula-E, put the petrolhead inside of you to one side and accept it is very different to what we have seen before, provides a much needed stepping stone in public acceptance of alternative motorsport/transport; and above all it actually provided some decent racing.