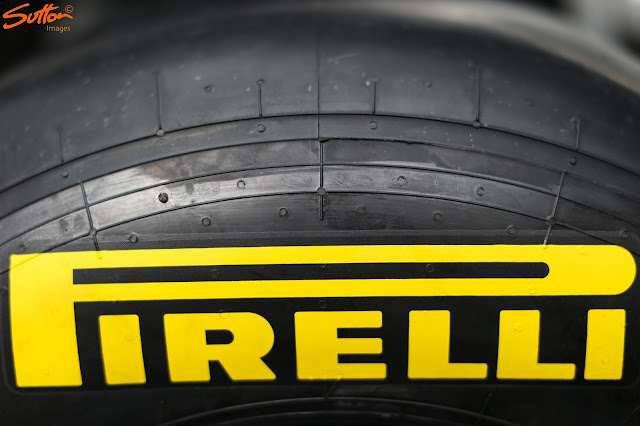 Pirelli, are the marmite of Formula One, although it seems that most want to blame them for all of the sports ill's.  Just like the goalkeeper nothing is mentioned of the good work they do until something goes wrong.  And, just like the goalkeeper they are not always to blame, he has 10 other players in front of him all of which have given the opposition the chance to score.  In this, perhaps tenuous analogy Formula One teams are much the same, they're the outfield players looking for someone to blame when the chips are down.

Sebastian Vettel's rant to the BBC in the bull pen after the race once again divided opinion, there are those of us who believe that Pirelli get far too much flack for providing a product to the specification that the regulatory body asked for.  Meanwhile, you have the Ferrari and Vettel supporters who are angered by the fact their driver lost out on a podium.

So, lets be pragmatic and try to understand what happened and more importantly why.  Firstly what did Sebastian actually say, for those that missed it or have only heard selective elements of the interview, note the quote I have highlighted in yellow for post interview reading:


Lee McKenzie: "Sebastian, do you think Ferrari were being a little too greedy in the end, do you think?"
Sebastian: "No"
Lee McKenzie: "So you were happy with the decision and you wanted to stay out? You could have got to the end you felt?"
Sebastian: "Well how many laps I was missing, not many and things like that are not allowed to happen, full stop.  If it happens 200 metres earlier, I'm not standing here now, I'm with 300 stuck in Eau Rouge, so I don't know what else needs to happen, ermmmm, yea."
Lee McKenzie: "So in that case then you're obviously upset that the tyre went that way, but you'd run it for 27.."
Sebastian: "I'll tell you what is upsetting, upsetting is that one thing is the result, you know this is racing, for sure we deserved to finish on the podium but the other thing as I said is this happens earlier, you know, I don't you know [sighs and doesn't commit to the rest of the comment].  I think it's a sort of theme that keeps going around, no-one is mentioning but it's unacceptable."
Lee McKenzie: "You were one of the drivers that stated their concerns to Charlie Whiting in the drivers briefing.  Was that taken seriously?" (referring to the Rosberg tyre incident during FP2)
Sebastian: "Well I think it was, but what's the answer? Same as everytime, yea well there was cut / debris, there maybe something wrong with the bodywork, the driver went wide bullshit, if Nico tells us he didn't go off the track, he didn't go off the track.  Why should he lie to us? It's the same with me I didn't go off the track, it's just out of the blue, the tyre explodes and as I said if this happens earlier I'm in shit."
Lee McKenzie: "But you drivers must be the ones in the power seat, so what do you do now before Monza?"
Sebastian: "I think we need to speak to each other (the drivers), it's probably not as bad as it was in Silverstone some years ago, but it's not acceptable."

Now I'm sorry Sebastian, I have the utmost respect for you as a driver and have often defended you when others have called into question your ability but, as you did I call bullshit too.  You were clearly off the circuit on numerous occasions as we can see below...

As we can see the tyre 'explosion' on Sebastian's car was aggravated by a constant abuse of track limits.  Had the sausage kerbing not been removed from the circuit at Raidillon (at the driver's request) I don't think we'd have seen the issue at all, furthermore I think Ferrari would have been forced to two stop.


This is a source of great frustration to many people, for the drivers we may aswell take their machinary to Santa Pod and see who's is the quickest in a straight line, as it appears that no corner or obstacle is sacred in their desire to make their own lives easier. It's Eau Rouge for Christ's sake, a corner you should dare to drive, whilst on Sunday its challenge was lessened as the drivers (not only Vettel) straight lined Raidillon with the sausage kerb being removed on safety grounds.  They would argue that they gained no lasting advantage by straight lining the corner and the data would probably support that, but that is because a) they were all at it, making any advantage null and void and b) the advantage was not supposed to be a direct consequence of laptime but rather them stressing the tyres less over the stint length, increasing its longevity.  The drivers also know that for Race Control to issue a warning and/or penalty for track limits there needs to a) be a serious breach that has led to a lap time gain, b) constant abuse of the limits, something you could argue Sebastian was guilty of, although he did take car not to straight line Eau Rouge every lap and c) consistency: the drivers know that if they're all doing it, very little can be done, as a penalty to every driver simply retains the status quo.

Did Sebastian question the strategy? We got the following audio around lap 29, just when FOM were starting to concentrate on the battle between Sebastian and Romain, although it's likely it came a lap or so earlier.

Sebastian: Think about the next stop, make sense?
Engineer: Ok, we are looking into it... Tyres from the data looks pretty good, to go to the end

I think the statement can be taken one of two ways, considering the way teams try to bluff one another.  Personally I think it was a call by Sebastian to insinuate he was thinking about a stop, as Lotus would then undoubtedly reign in Romain, thinking he wouldn't need to make the pass on track.  This would invariably give the German a little breathing room and continue to run the pre meditated one stop strategy work.

But didn't Hembrey say the tyres should be able to do 40 laps around Spa?

In a post GP interview with Ted Kravitz, Paul Hembrey did concede that they were targeting a maximum of 40 laps for the Prime (Medium) tyre around Spa.

Ted Kravitz: "So what did you estimate the wear life to be and he did 27 I think laps on them"
Paul Hembery: "28, we thought the strategy was going to be based 2/3 stops as you saw the majority did, but they felt, clearly they could make it work on the one stop. The wear life was indicated at around 40 laps but that's an indication, you know, race conditions can change that and some factors involved in racing mean that sometimes that is not a precise datum and other teams were clearly taking another direction."

Now, whilst most jumped on this an opportunity to jump down the throats of the beleagured tyre supplier I find myself in their corner again once again.  Firstly note Paul's cavaet that seems to have alluded everyones attention 'around' 40 laps, ie not 40 laps.  In any case the only teams I could foresee doing 40 laps on the Medium around Spa would be Manor and McLaren, given their lack of pace compared with the rest of the field.  It was clearly a two-stopper, but Ferrari thought otherwise and in fairness to them they would have had a Pirelli engineer with them suggesting that it's possible.

This is part of a larger, more worrying issue that I have mentioned before, the teams are driving as slow as possible in order that they make less stops.  After all there is a time loss during a pit stop which can be offset by time lost on track by not stopping.  In the case of Spa, that pitlane delta is +/- 22.5 seconds (depending on the time in box) meaning you can do 22 laps at a second a lap slower than your opponent who's stopping once more all whilst retaining track position.  Nothing can really be done about this for 2015 as the difference in time between the two compounds just isn't large enough.  However, Pirelli will surely be evaluating the situation and is one of the prime reasons the teams want free choice on tyre compounds, giving those who can't make the tyres last an offset that works for them with one additional stop.

Returning to the 40 lap prediction we must also remember that this is based on the guidelines set forth by the supplier and since the 2013 debacle enforced by the FIA.  This covers but is not limited to minimum/maximum pressures, camber settings and tyres to be mounted in the correct orientation.  Tyres are an area that can offer a huge performance advantage over a rival and so it's obvious that the teams will run close to the margins to achieve the best performance, in doing so AND trying to increase tyre longevity you'll clearly run into issues.  The 40 lap prediction can therefore only be seen as a best case scenario, not a target to be aimed at.  Furthermore, given the simulation work used to predict this lifespan it's clearly void by the mere fact that the track was changed.  Sebastian's excursions outside of those limits aside the stint length would clearly be less than the 40 laps quoted by Paul Hembery, owing to the extra load going through the tyres at Radillion and their consequential deformation as speeds were increased down Kemmel straight.

Just as the teams were culpable for the problems we saw in 2013, I think in this instance the same can be said for Sebastian Vettel and his approach to the race.  No-one wants to see a failure, however, when you continuously push something beyond its tolerances it is bound to fail.  I just hope that everyone see's sense this time around, rather than chase Pirelli around with pitchforks insisting they change something.

EDIT 28/08/15 - Vettel aside here is a slideshow of other drivers etiquete through Eau Rouge and over Raidillon, of which Perez and Kvyat are the worst offenders - Slideshow

Furthermore, it would seem although others clearly took the short cut at Radillion the effects on the rear tyre were not as severe as those already highlighted on Vettel's SF15-T, most likely due to how rigid or softly sprung each car is.  In the example below of when Maldonado runs wide during FP3 his right rear unloads, coming down without such a sharp deformation and/or twisting force on the tyre.  Now we don't have speeds to see if they are travelling through there at similar velocities but we can see that post kerb hop the car is unsettled so much that the front wing collides with ground, suggesting a very different damping arrangement than the Ferrari. 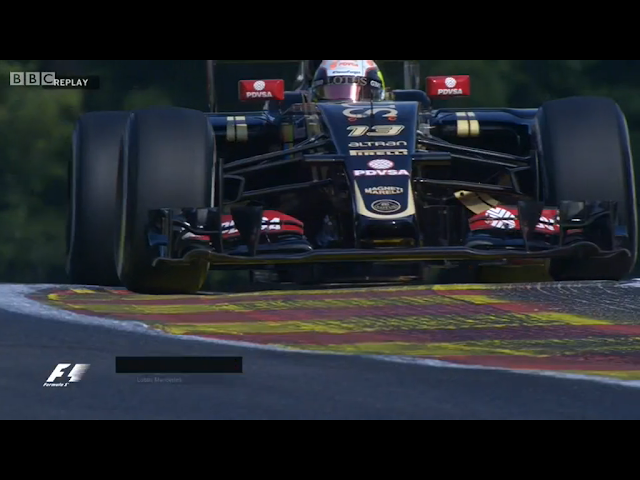 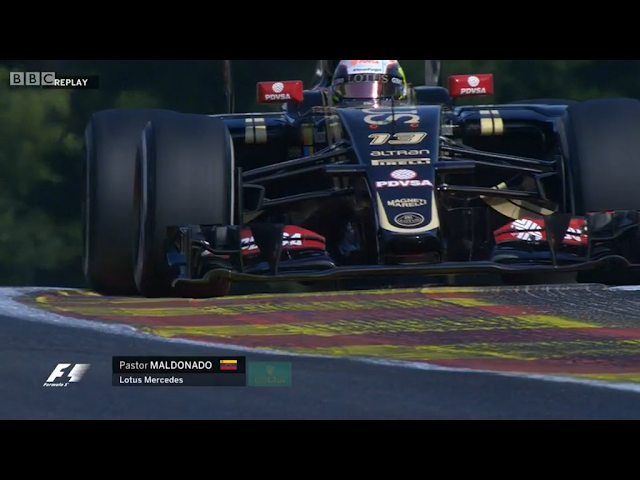 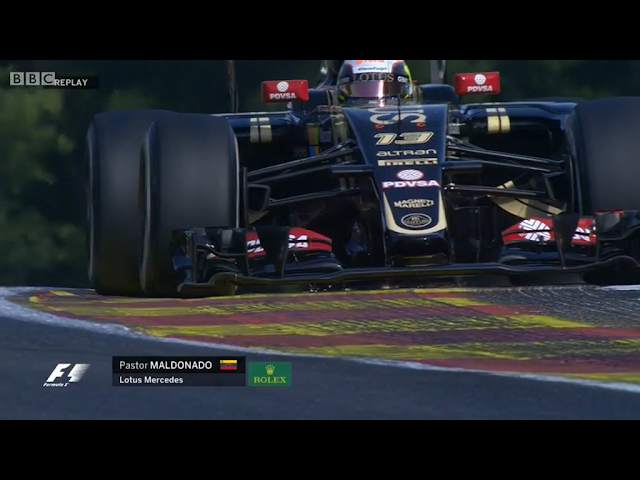 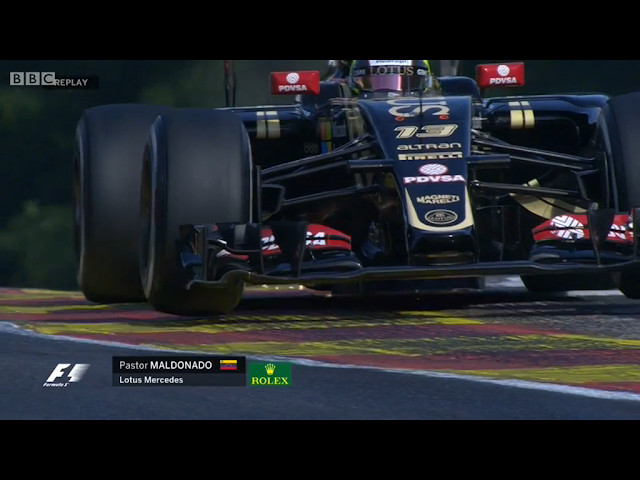 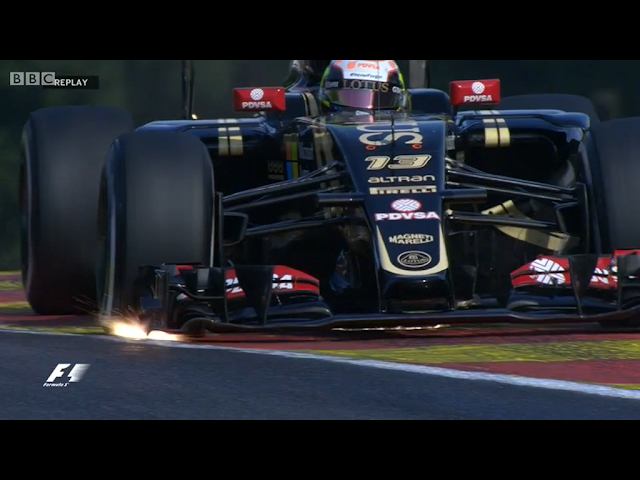