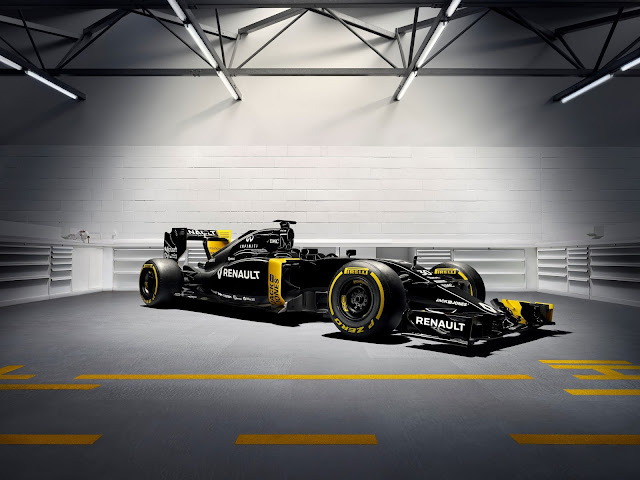 Renault's return to Formula One as a constructor is now complete, having purchased the ailing Lotus team that's worn their moniker before.  In recent days we've learnt of Maldonado's departure from the team with the Venezuelans financial backing drying up.  Numerous suitable candidates were inline for the spare drivers seat but the team decided upon McLaren outcast Kevin Magnussen.  The second-generation Dane brings useful and relevant experience, having completed the 2014 season with McLaren and qualified in Fernando Alonso's place in Australia 2015.  (A catastrophic engine failure left him on the side of the track on the way to the grid)

Partnering Kevin is 2014 GP2 champion Jolyon Palmer who was promoted to a race seat, having completed several free practice sessions in 2015 and performed the function of reserve driver.  Meanwhile, the team have moved Frédéric Vasseur into the team principal role.  The French man may not have F1 credentials but is well connected within the Motorsport industry, not only running the ART GP teams but he is involved in the Spark program that helped build the original Formula E cars.  Bob Bell makes a welcomed return to the Renault fold having spent the last few years milling around at Mercedes and more recently Manor, performing the Chief Technical Officers role.

Throughout its time in Formula One the team that will be called Renualt once more has achieved great things and the personnel that remain at the teams base in Enstone is undoubtedly talented.  However, the loss of key figures to rival teams in the last few seasons and ongoing financial issues have been crippling to the teams development.  Furthermore, the teams move from Renault powerunits in 2014 to Mercedes in 2015 didn't help them gain the momentum they craved. And, whilst it may have saved them money directly, indirectly it cost them time and money in redesigning the car to suit the PU106B's charateristics.

This is where the new challenger may also be compromised, a lack of budget and indecision over who would be powering the 2016 car has led to a protracted development phase.  The powerunit and its ancilleries form the fundamental basis of the cars layout and so the early designs were shaped around the development of the Mercedes powerunit.  Easy then, you might say, just revert to the 2014 design and work outward from there.  Now if only it were that simple but, lest we forget the E22 was asymmetric starting with the fork nose and moving all the way back down through the car, something that can no longer be done owing to the changes in the rules.  Furthemore, that's only the surface of the car, the internal configuration of the E22 and E23 were vastly different too.
As we can see, the team went about packaging in a totally different way car-to-car, with the 2014 challenger featuring almost vertical cooler installations, whilst the 2015 challenger had a more conventional lent back installation.  Both are the teams best attempt to maximise the powerunits thermal potential, whilst minimising the aerodynamic impact, and as both powerunits have very different thermal targets the results cannot be easily correlated.

The 2015 campaign saw the team produce perhaps the least amount of large scale upgrades in Enstones history, with the team muddling along with essentially the same car for much of the year.  Again this was down to budget and not ingenuity, with the long mooted 'short nose' finally showing up at the last race in Abu Dhabi but wasn't raced.

So, most importantly what you'd like to know is what have learnt from Renault's launch of the RS16.  Well, I'm afraid not a huge deal more than we already knew. 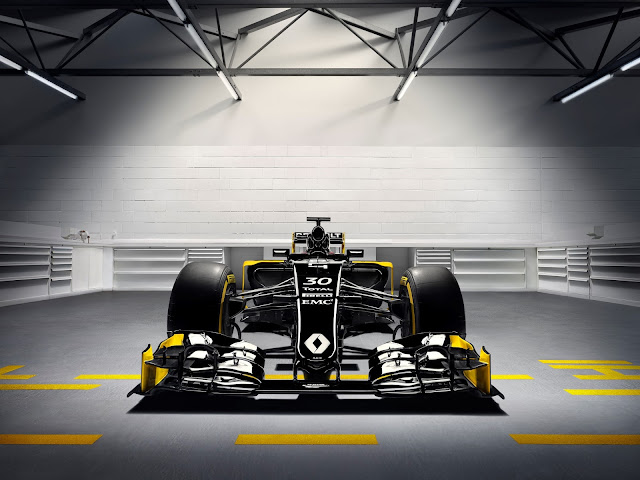 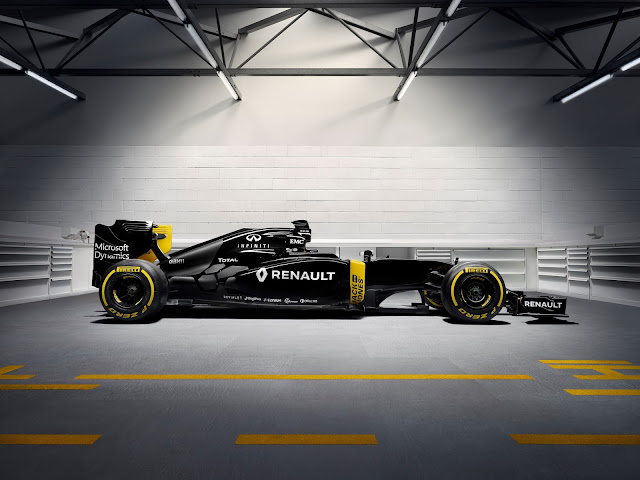 The car displayed at the launch and in the images above is an E23 in drag, yes, they went to the effort of adding a small wastegate pipe alongside the main exhaust but aside from that and the paint job it's last years car.  Now I'm not expecting a revolutionary design from the team for 2016 but certain areas of the car are a given in terms of changing design.  The cooling parameters, as I've already discussed, will clearly be different, as the thermal output of the powerunits differ.  As such, I suspect we'll also see the team return to a conventional roll hoop / airbox layout, discontinuing the cumbersome tri inlet configuration used on the E23 and seen above.

We may not see it on the car straight out of the box but also expect the team to converge on the front wing design that others used during 2015, whereby the outer elements almost entirely serve the purpose of dealing with wheel wake.  Their design has been cutting its own path now for some time and at some point teams either innovate beyond the rest or join the club, I suspect Renault will do the latter.

2016 will provide the team with a springboard, with focus placed on restructuring the work flow and development structure based around a new company ethos.  I don't expect the team to be challenging at the sharp end and they'll more than likely struggle to make Q3.  The new tyre rules could be used to marginalise some of the pace deficits but the truth of the matter is they will struggle all round.  An under developed chassis paired to the under powered Renault powerunit will see the team looking down at 2017 with fondness, especially if the new rules get ratified, as it'll give them a blank sheet to work from.
Tagged
Newer Post Older Post