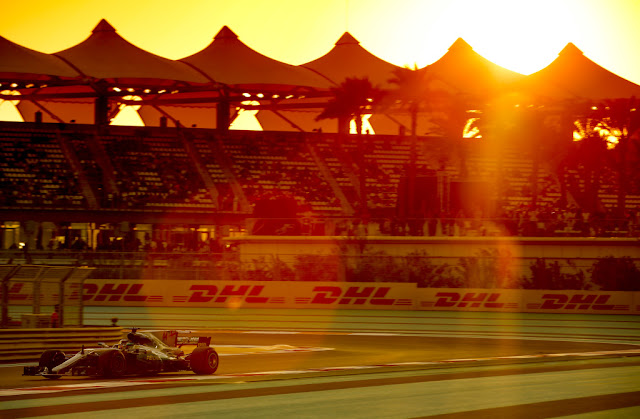 
The Windy Wind was Windy as FP3 unfolded, gusting up to almost 5 m/s and making the awkward exit of the final turn an excellent place to lose the car, an experience shared by more than a few cars. Even Valterri Bottas fell prey to the challenge, and the team had the floor off his car post-session, concerns about forces going through the chassis being looked at, but no major drama.


Grosjean suffered mystery snap oversteer that remained unresolved, and as the sun plunged towards the horizon and the twilight gloaming approached, both Toro Rosso's remained distinctly and curiously off the pace, despite Renault promising unleashed engine maps, reliability be damned.


Also suffering a torrid session was Lance Stroll, who was thoroughly unable to get to grips with the circuit, apologising to his team after the session, frustration evident in his voice. In his meagre defense, he was on a fast lap when an umbrella wandered onto track, bringing out a VSC and providing a moment of levity during a fairly straitforward session. Still miles off Massa and the debate about his F1-worthiness will continue through the off-season.


Ricciardo had the better of Verstappen and Sainz the better of Hulkenberg and Perez the better of Ocon but it was the entirety of the midfield that was the star, P7 Alonso to P13 Ocon being covered by roughly 0.45 seconds. The biggest remaining battle is also squarely in the midfield, with Toro Rosso's P6 very much up for grabs. With a mere 4 point advantage over Renault, and their total invisibility in terms of pace, it's all to play for for the team from Enstone. They're going to need a P8 to make that happen, which will be a strong challenge given the strength of Force India and the slow, inexorable resurgence of McLaren.


Off piste, the revamp of the F1 logo has come in for a LOT of criticism, particularly from the graphic design lot as the official new look is set to be unveiled post race. And it is the end of an era for American telly, as the team of Buxton, Hobbs, Matchett and Diffey is set to ride off into the sunset, with the news that ESPN will likely be taking audio and pictures from an already existing broadcast, rather than investing in their own team. The team of Varshey, Hobbs and Matchett was my intro to F1 (yes, it was many, many years ago), and I will always retain a fondness for them. But the flipside is that the US might very well be the first have proper access to over-the-top delivery of video, long a holy grail for the serious fan. And those cars will all be fitted with 360° cameras fitted ahead of the much maligned halo. Which, if you're in need of a bit of comedy feel free to check out Bottas trying to exit the cockpit with the halo installed.

Just watched @ValtteriBottas trying to get out of his Halo fitted car as quickly as possible while Jo Bauer (FIA) was timing it. At first he didn't know where to grab that ugly thing. Took him ages to exit. #AMuS pic.twitter.com/9gSxIKhNI3
— Tobi Grüner 🏁 (@tgruener) November 23, 2017

Suffice it to say, he's gonna need a bit of practice to make the minimum time.


And in perhaps the MOST interesting news, it turns out that the Copenhagen race, which was touted a bit earlier this summer, is fully in the news as a private meeting was held this week with investors, according to the Danish papers. Apparently, along with London and New York, it is at the top of F1's street circuit list and a linchpin of their strategy post 2020. And in perhaps the most DEPRESSING news, Jean Todt will be running unopposed for the FIA presidency, never a good circumstance for an organization that is supposedly "democratic'.


Green Light!! Gasly, Ericsson, Wehrlein, Magnussen, Hartley and Grosjean were out in a gaggle at the dead start of the session. Bottas and Hamilton trailed out 30 seconds or so later and as they got their warm ups underway, it was worth pointing out that it was 10°C cooler on the track than in FP3, adding a bit of uncertainty to the session.


With 15 minutes left, as the Mercedes were on their first hot laps, Ferrari, Force, India and Williams had all joined the party. Magnussen was fastest of the first bunch, trailed by Wehrlein and then the Mercedes came through, Bottas taking P1 till Hamilton crossed the line, crushing his FP3 time with a 1:37.473.


Vettel slotted P3, but well off the pace suggesting traffic or some issue, and it was Raikkonen who took the early advantage, rocking up and demoting his teammate to P with 11 minutes left in the session.


In absence of the Red Bulls, it was Ocon best of the rest, lingering in P5 till Verstappen banged a time in good enough for P5. But not nearly as good as Ricciardo, who went P3.


Whilst that drama transpired, Mercedes were back on it, and this time it was Bottas atop the mountain, a crucial tenth ahead of his teammate. Naturally, where Mercedes leads Ferrari will follow and this time around it was Vettel with the faster time, displacing Ricciardo for P3.


Vandoorne had a blinder as well, demoting Ocon until Perez came along and did him as well. Clearly there was massive evolution of the track, no surprise considering the how windy it was, the track no doubt rather dusty at the start of the session. As the clock ticked down, Hamilton rocked off a purple S1 before bailing on his effort and hitting the pits with just under 6 minutes left in the session.


Perez, Vandoorne and Hulkenberg were winning the teammate wars in Q1, and Stroll, Wehrlein, Ericsson, Gasly and Hartley were in the the drop zone, with it all to do to taste the gloried pastures of Q2. Into the pits to reset they went, and it was Red Bull and HAAS taking advantage of the quiet track to trundle out and try and set some decent times.


Magnussen managed a P13 as the remainder of the field began to circulate for their final efforts of the session, but Grosjean was unable to improve his P15 and it was a precarious place to be as times continued to drop. 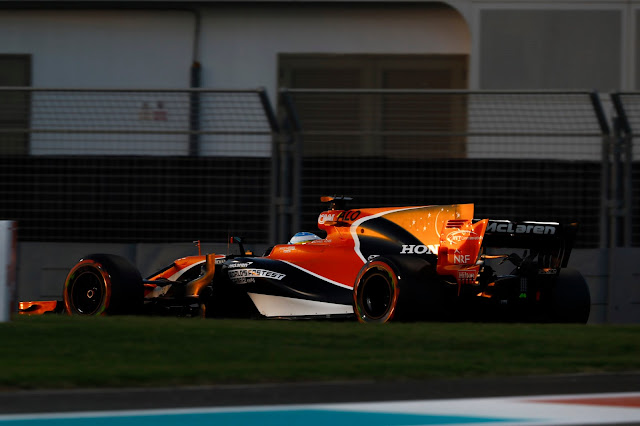 Alonso was on a personal best in S1 as the clock tipped below 1 minute. Massa looked quicker than Fernando, as the Spaniard went P11. Hartley went P19 till his teammate went P16. Massa confirmed his speed going P8 and in a last ditch attempt, Stroll strung together enough of a lap to make P15, kicking Grosjean into the ditch and a full second faster than his previous best effort, though still a full second off his teammate. They were off in search of some Maqluba as the rest reset to chase the palmares of Q2.


Bottas, Hamilton and Magnussen kicked off Q2, with Raikkonen and Vettel making up the following duo. AS Bottas, who led the way, was twisting through the final sector, Perez and Hulkenberg had joined the fray. Not far behind were the Red Bulls and McLarens and as first Bottas, then Hamilton lit the board purple, the track was getting quite busy.


Dipping under 17s for his S1 it was a 1:36.742 that put Lewis at the front, followed by Bottas. Vettel again managed a P3, but was just 0.06s off Bottas, with Hamilton being what appeared to be a thoroughly unbeatable 0.35s further up. Ricciardo put it P5, quite competitive with Raikkonen's time and Hulkenberg snuck it in between the Red Bulls, going P6 to best Verstappen, who was not having the best of weekends.


Stroll was looking much quicker just 0.3s off in the first 2 sectors, but a loss of  0.4s in  the final sector saw him wind up in P15, though cutting the margin to Massa. Perez, Hulkenberg and Alonso this time round managed to beat their teammates, but Ocon was mere hundredths off, a much closer toss than the previous session.


On the outside looking in were Vandoorne, Massa, Magnussen, Sainz and Stroll, with it all to do, the hallowed halls of Q3 beckoning with their dreams of ultimate glory.


Alonso and Vandoorne led the way for the final push, and as they headed into the final sector there were just 2 minutes left in the session. Bottas, Magnussen and Hamilton were next in line, and the pits had emptied by time Alonso cracked the timing beam to launch himself into his last tilt at glory.


As such things went, it was not the best of his efforts, and in fact, neither of the drivers behind him were on bests either. A quick glance at the temps showed the track down to 29°C but Lewis was apparently just ramping it up as he got deeper into the lap.


Massa into the top ten at the last moment, putting Alonso out, a massively satisfying result for Felipe in his last race. Hulkenberg was well through, P7 and best of the rest. Sainz was nowhere, P12 when the dust settled and splitting the McLarens.


Alonso, Sainz, Vandoorne, Magnussen and Stroll were off in search of jellab, to soothe their egos, as the top ten got ready to search for ultimate glory. 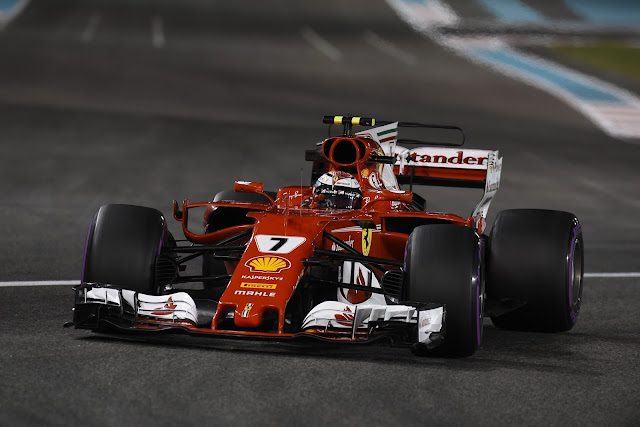 Raikkonen led the way for Q3, trailed by Hulkenberg and Bottas. Hamilton trailed a bit astern, followed by the Force India's, who were putting on by far the closest of the teammate battles in the final qualifying session of the year. Vettel was out in between the Red Bulls near the back of the field, and a bit of news on Sainz as they warmed their tyres, power loss on his lap.


Early days in the lap, it was Bottas wearing the purple mantle as Raikkonen set the early time first across, and then it was Bottas, provisional pole as Hamilton was suddenly 0.2s slower than his teammate. Vettel again went P3, but the insurmountable gap to Mercedes hovered at nearly 0.4s.


Verstappen better of Ricciardo for P5 and it was Ocon, finally turning the tables and getting just ahead Perez by a tenth, with just once chance remaining for Perez to even it up.


Massa, Ocon and Bottas led the way, with Hamilton, Raikkonen and Hulkenberg trailing. Ocon was told to "Stay ahead of that Merc", but that proved to be impossible, as Valterri put his foot down, not the kind of drama you'd want on your final run.


Sure enough, it was personal bests and not purple sectors for Valterri as Lewis appeared to regain his mojo, setting a purple S1. Faster too, in S2 but not purple for Hamilton and then a properly scruffy S3, almost losing it through the final turn, full on oversteer as T21 claimed yet another victim and put paid to Hamilton's dreams of pole. 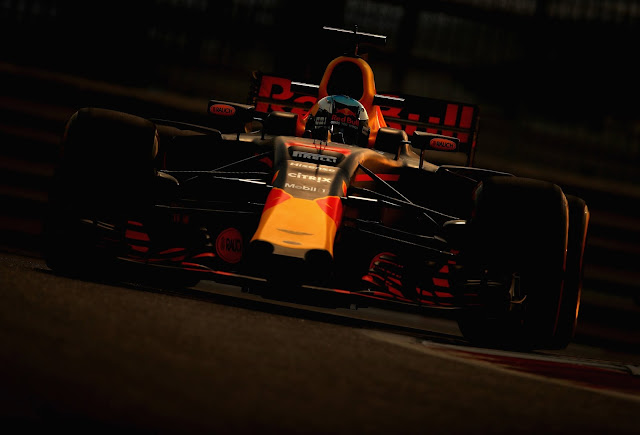 Ricciardo to P4, ahead of Raikkonen and Verstappen P6, with Vettel P3 after the dust settled. Hulkenberg was best of the rest, and if he can hold that for the race it's P6 for Renault in the Constructor's. It was Perez the ultimate victor in the Force India battle, by a crushing 0.02s, and Massa in P10 will no doubt be focused quite firmly on finishing ahead of Alonso, no matter what.


Assuming Renault get Sainz sorted without penalty, it should be good for the action as Carlos tries to move forward. Ricciardo versus Raikkonen also looks to a bit of an interesting contest and perhaps the return of internecine warfare to Mercedes will provide some surprises. But first, they have to survive the start intact, something that has not always been possible this season. 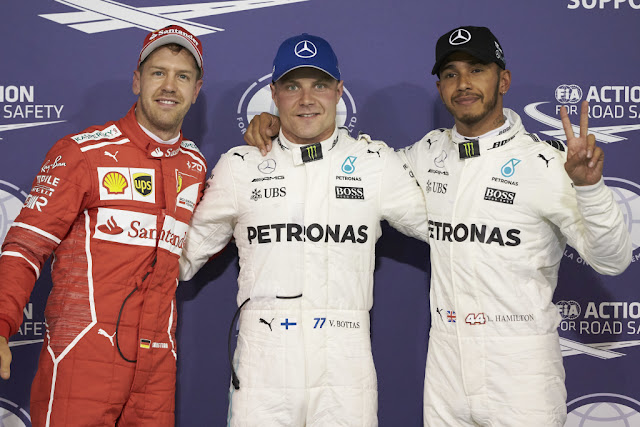 
Remember, Play Nice in the Comments!


Oh, and on a personal note, if you like my writing, do consider giving my music some support too, at https://igg.me/at/Nightscapes/x Thanks!!
Tagged
Newer Post Older Post