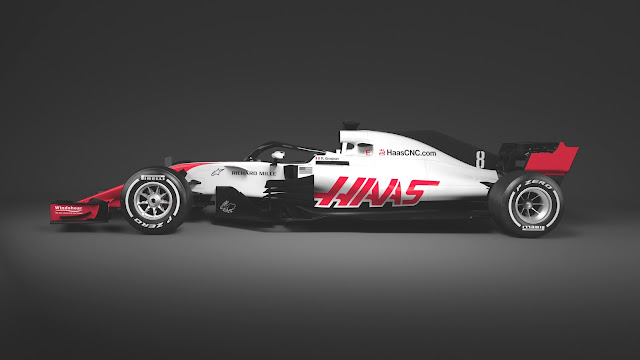 As expected the VF18 is an evolution of last years machine with several areas tidied up and refined, whilst the decision to converge on ideas used elsewhere up and down the grid has clearly been taken in some areas of the car. 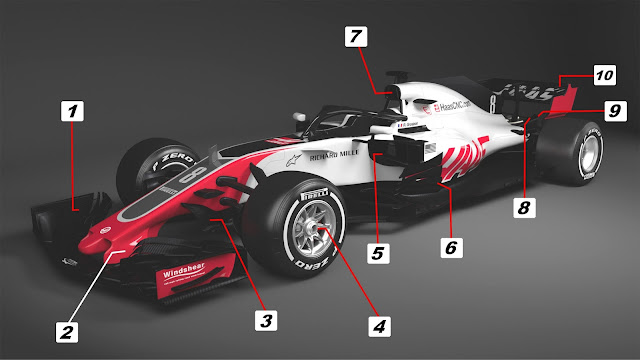 [1] The front wing is very similar conceptually to what the team ran during last years campaign albeit much more complex, especially in the outer section where the flaps have been divided up.

[2] The nose is very similar to last years design, although the pillars have been revised in order to improve the flow downstream.

[3] The integrated turning vanes used by the team in 2017 have been refined further in 2018, solidifying their role in the movement of airflow around that region of the car.

[4] Purchasing their powerunit, gearbox and suspension from Ferrari means they have commonality that gives us clues as to how the factory team will set up. You'll note that means the car utilizes a blown axle at the front of the car again too, assisting the front wing in its efforts to control the wake she's by the front tyre.

[5] Having seen what Ferrari did last year with the design of their sidepod, Haas have taken cues from the design, moving the upper of the two side impact spars forward and into a lower position, allowing more freedom to design the sidepod.

[6] Alongside the sidepods flank a large louvred deflector panel can be found, similar to the one introduced in the United States last season.

The installation of the halo has led to a few changes, including the use of a serrated windscreen which will reduce the buffeting to the drivers helmet that'll be changed by the safety structures introduction.

[7] The airbox has been placed as high as possible and made wider in order that the quality of airflow into it isn't dramatically affected by the halo.

[8] The shark fin, outlawed by the FIA for 2018, has been replaced by an engine cover with an enlarged spine, whilst the T-Wing, which the FIA had also looked to remove, can be found in the lower position fancied by both Williams and Sauber last season.

[9] The duckbill style crash structure winglet used by Mercedes and Ferrari in 2017 has also been utilized.

[10] The rear wing is once again enforced by a pair of swan neck style mounting pillars, whilst the open-ended style louvres that have almost become commonplace up and down the grid have also found their way onto the Haas.

Don't forget if you like my content I'm trying to ramp things up for 2018 and will be providing full car illustrations for most of the field that I'll update throughout the season to give a 'story mode' of their development throughout. You'll be able to follow this by contributing via my Patreon page - www.Patreon.com/SomersF1