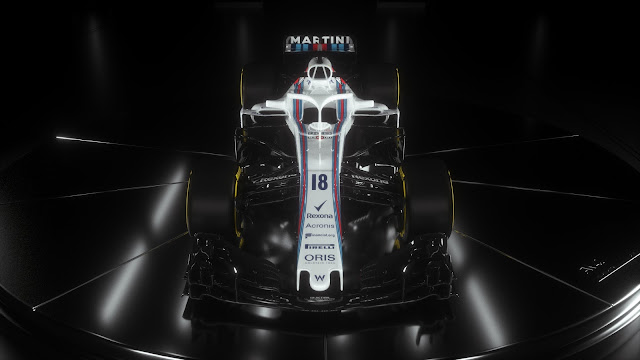 Williams are the second team to show off their 2018 challenger and it’s packed full of wholesale changes as the team look to revive former glories. Led by Paddy Lowe, who joined the team too late into the development cycle of their 2017 challenger to make meaningful changes, it features several design cues utilised by their adversaries last season.

Joining Lowe, as part of an overhaul of their technical department, was ex-Lotus and Ferrari designer Dirk De Beer, taking up the role of head of aerodynamics. It’ll be of no surprise then that this years car is an amalgamation of last years leading duo, packed with features that they hope will help to shape the FW41 into a serious contender. 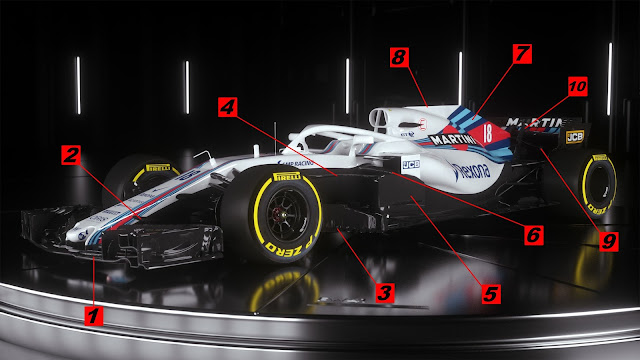 The FW41’s front wing [1] builds on the design utilised in 2017, utilising a triple element mainplane and short chord flaps. Meanwhile, the nose continues to feature a thumb style tip and ‘S’ duct, however, it now features a ‘cape’ design [2] much like the one run by Mercedes last season.

The Mercedes influence can be seen further downstream too as the bargeboards sit astride numerous longitudinal serrations [3]. Above this they have an elongated version of the boomerang wing [4] used by Mercedes in 2017 too. However, the length of the boomerang means it is connected to the outboard deflector [5], which bears a significant resemblance to the one used initially by Ferrari and latterly Red Bull in 2017.

The cars midriff, much like the Haas design, takes its influence from last years clever sidepod arrangement utilised by Ferrari. Adopting the low-slung side impact protection spar and enclosing it in its own bodywork [6] allows the sidepod inlet to be pushed further rearward, improving aerodynamic and cooling efficiency. Weight from the associated cooling hardware inside the sidepod is also pushed rearward, helping to balance the distribution demands placed on the team by the introduction of the halo.

The change to this style of sidepod has clearly influenced the overall design, with an extremely svelte waistline and aggressive undercut tapering toward the rear coke bottle section, which’ll undoubtedly bring a significant leap in performance when compared with last years more conventional layout.

The halo, although painted in white to match the livery gives up no clues in these images as to the aerodynamic fairing that’ll be used. With 20mm to play with all of the designers have been working tirelessly on mitigating the aerodynamic issues associated with the safety structure, but in Williams case we’ll have to wait to see what they do in this respect.

The airbox remains largely unchanged when compared with its predecessor, having already opted for a wide inlet in 2017. Aft of this the engine cover uses the maximum permitted area, with an enlarged spine replacing the shark fin cover used last season[7]. The team have also retained the wide strip atop the forwardmost horizontal section of the cover [8], as they look to maximise the amount of side force being generated.

As expected the FW41 features a low T-Wing [9] similar to the one used by the team throughout 2017, taking advantage of the area of freedom within the regulations.

The rear wing is now supported by two swan-neck style mounting pillars [10] either side of the exhaust, rather than the single yet perhaps heavier alternative single pillar used in 2017. The open-end style louvres utilised last year are retained whilst the complexity of the lower straked section of the endplate is increased once more. 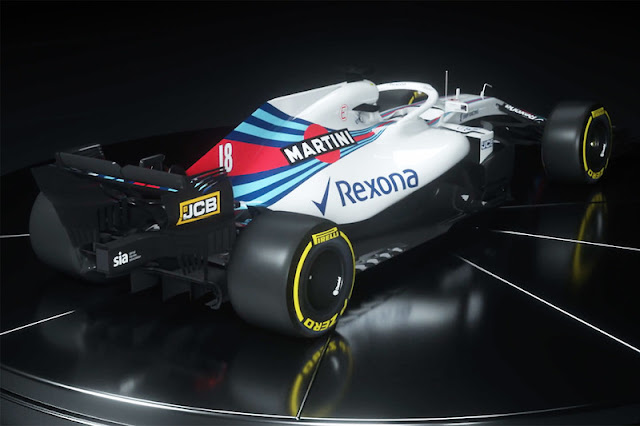 The influence of Mercedes 2017 challenger is revived at the rear of the car, as the curled outer Gurney style tabs used by the Brackley based team have been studied and implemented by Williams for 2018.

I think many F1 fans will join me in hoping that Williams can claw their way back toward the front of the grid. However, I do see the FW41 (at this point) as only a stepping stone in that journey, as whilst they'll undoubtedly have seen their numbers improve when compared to last years field you'd expect the leaders to have learnt valuable lessons during that development phase that will continue to shape their cars going into 2018.

Don't forget if you like my content I'm trying to ramp things up for 2018 and will be providing full car illustrations for most of the field that I'll update throughout the season to give a 'story mode' of their development throughout. You'll be able to follow this by contributing via my Patreon page - www.Patreon.com/SomersF1
Tagged
Newer Post Older Post