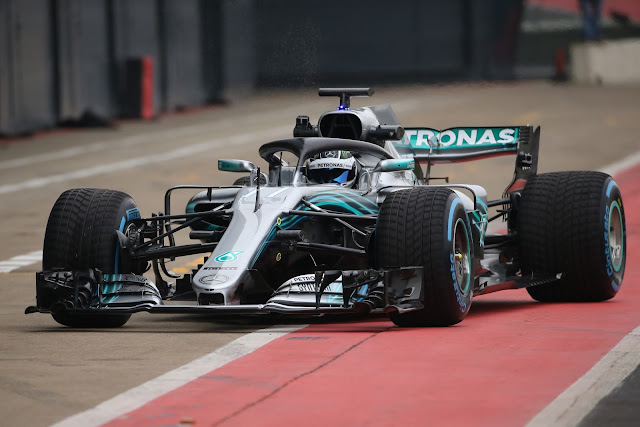 The Mercedes W09 launches off the back of a hugely successful run of championships, during which time the team and their drivers have collected four back-to-back titles. What makes this even more impressive is the scale of the regulatory changes that the team had to overcome for 2017, with no team in the sports history previously able to maintain their advantage in those circumstances.

Their 2017 titles did not come without their challenges though, with the car often described as a ‘diva’ and undoubtedly the cause of more than a few headaches and sleepless nights along the way. This often meant working tirelessly to find the optimum setup, an issue compounded by the threat of Ferrari in the early part of the season, as they made a bold leap forward leading to a fraught battle between the pair until such point that Mercedes began to get on top of the cars sometimes counter-intuitive nature.

Speculation regarding the issues faced by the team saw the finger pointed squarely at the cars wheelbase on more than one occasion, especially as Mercedes and by default the ‘customer’ teams found the length of their cars to be in stark contrast to the rest of the field. The team were quick to downplay any correlation with the cars wheelbase, remaining steadfast in their statement that their issues were setup and performance window related. Nonetheless, the rumours did not relent, with many even suggesting that the team would abandon their low-rake, long wheelbase philosophy in favour of a shorter, more steeply raked machine for 2018, more akin to the philosophy used by Red Bull since 2009.

As the covers, digital in some cases, have come off the cars this week it’s become clear that whilst the Ferrari and Red Bull’s of 2017 seemed more nimble, in part due to their shorter wheelbase, the general consensus has been to move toward a longer car, inline with what Mercedes operated with last season. 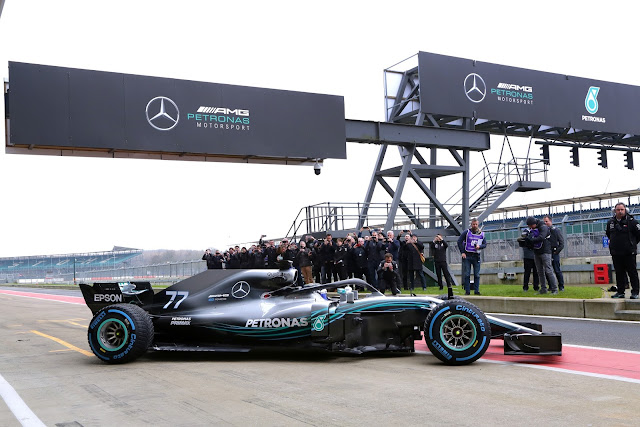 The W09 represents a further evolution of a design philosophy that the team have been pursuing ever since they returned to the sport in 2010. Hard lessons learnt during 2017 have led to further optimisations of the overall concept, whilst a steady eye has been cast over the forthcoming changes, including the introduction of the halo, a significant weight reduction and a new breed of tyres, which will offer more degradation, from Pirelli.

From the outset the W09 may appear a little tame, especially when compared with how radical its predecessor appeared to be when presented but, once you begin to focus on the detail you can see just how refined this years challenger is.

The front wing and nose, already at the head of the field, are carry over from last years design but may be subject to further changes as the car laps Barcelona in the upcoming tests. 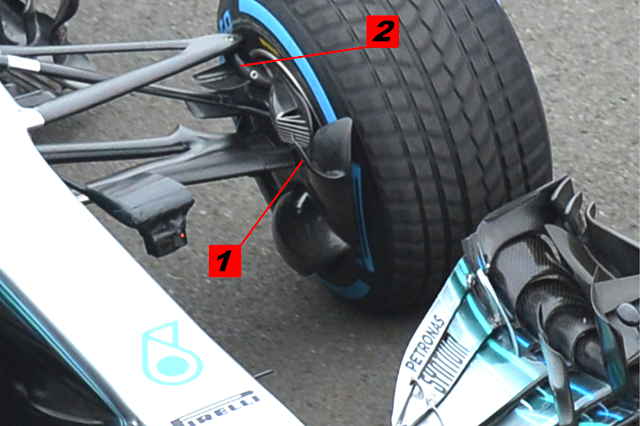 The front brake ducts, which are already supremely complex, now sport an additional curved vane [1], which helps to control the airflow spilt by the front wing and push it around the front tyre, dictating the shape of the wake generated by the tyre and therefore improving the performance of the airflow downstream.

The team have retained the outboard horned front suspension kingpin extension [2] that they introduced in 2017 alongside Toro Rosso and which has subsequently been copied by several teams this year. This falls inline with the preservation of their sidepod concept, which remains in a similar position - albeit with a narrower inlet, to last year as they look to pair the flow between the suspension and sidepod in order to improve cooling efficiency through the car and aerodynamic efficiency over and around the sidepods. This is further enforced by the use of the chassis boomerang [3]. 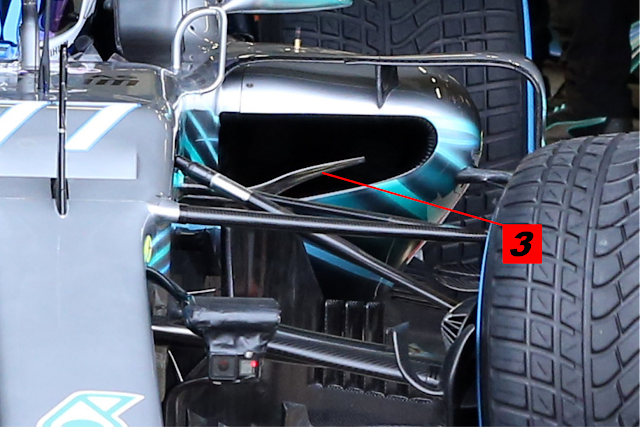 Conversely the train of thought elsewhere, with Ferrari having led the way on this last year and copied by a large percentage of the grid this season, is to position the highest of the side impact spars in a lower position, giving the designers more freedom in terms of the sidepods starting position and geometry, both internally and externally. Only time will tell who chose the right option, but this is something that’s essentially ‘baked-in’ to the chassis and is not something that can be changed easily, bringing us to the conclusion that Mercedes must consider their choice an aerodynamic advantage that trumps the flexibility of moving around some weight. 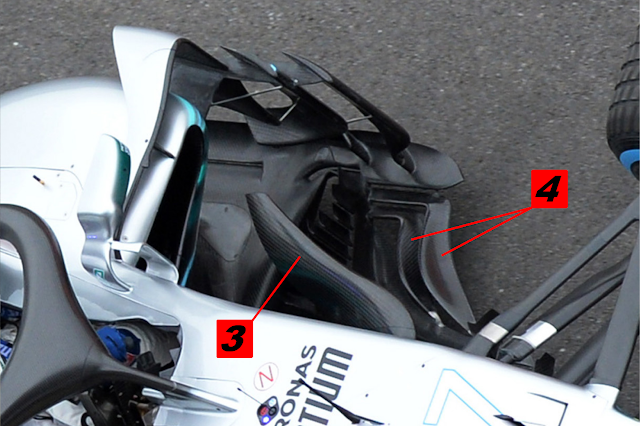 Interestingly the bargeboards, the scene of intense development for everyone throughout 2017, at first glance appear to be relatively similar. However, on closer inspection a great deal of work has gone into improving the flow structures that can be destroyed and recreated or even reinforced in this area. On the lower leading edge the team have added two bi-directional extensions, which extend out toward the front of the car before sweeping forward and forming crescent shaped pre-bargeboards [4]. 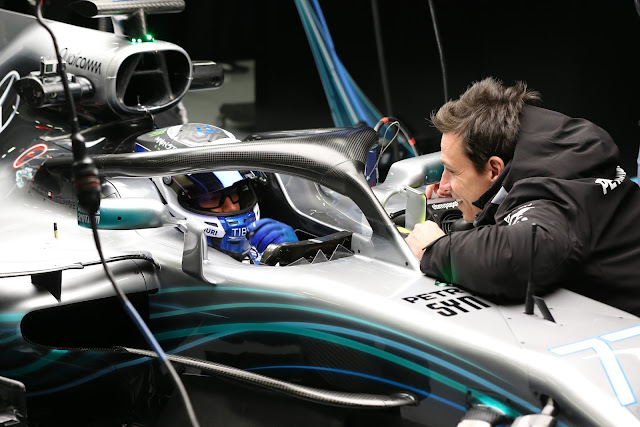 The halo has been presented in a fairly raw format by the team at launch but, like their competitors they are afforded the opportunity to use a 20mm fairing, which can be used to alter the aerodynamics of the safety structure. As such, we can expect a fairing to appear on the W09 pretty rapidly during testing. You may also note that whilst the airbox doesn’t appear to have changed dramatically it has been furnished with an additional horizontal spar in order to deal with the revised airflow pattern that the halo offers up. 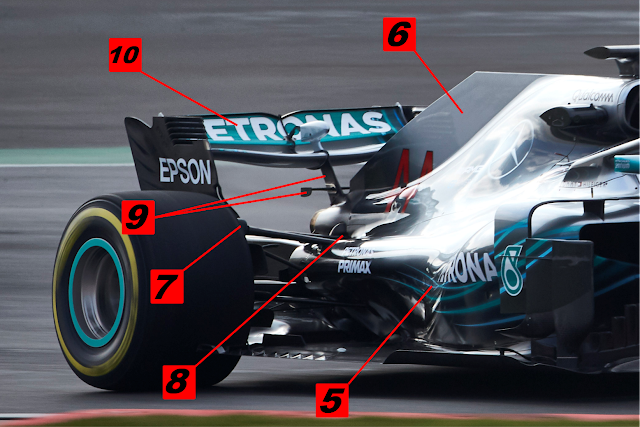 The rear end of the car appears to be tighter than its predecessor, with the bodywork set to closely hug the powerunit and its ancillaries [5]. Having been forced, like the rest of the teams, to ditch the shark fin their engine cover takes up as much of the available space as is possible within the reworded regulations [6]. The rear suspension has also been reworked with the upper, outer pickup point having been raised and the accompanying aero appendage adapted to suit [7]. Meanwhile, the inboard mounting points also appear to be placed higher, with the exhaust forced to arch over the top of them, in much the same way the squashed wastegate exhausts already did last season [8].

The single centrally mounted pillar used to strengthen the rear wing structure has been retained for 2018 too, although it’s unclear if it still intersects the exhaust, with it likely combined with the tail end of the engine cover instead. Mounted either side of the pillar [9], just above the exhaust, the team have also utilised this free area to mount some simple winglets [9], something that is likely to increase in complexity as testing and the season unfolds.

In launch trim the team have returned to the ‘spoon’ style rear wing [10] favoured in the early phase of 2017 but seemed to fall from prominence in the latter stages, as they returned a more conventional wing. With some of the foibles that caused issues during 2017 ironed out it would appear that they wish to pursue this more efficient design once more.

Overall the W09 appears to represent a solid step forward for 2018, resolving some of the inefficiencies of its predecessors whilst pursuing even more performance for the season ahead.

Don't forget if you like the content I create I'm trying to ramp things up for 2018 and will be providing full car illustrations for most of the field, I'll update these throughout the season to give a 'story mode' of their development throughout. You'll be able to follow this by contributing via my Patreon page - www.Patreon.com/SomersF1
Tagged
Newer Post Older Post