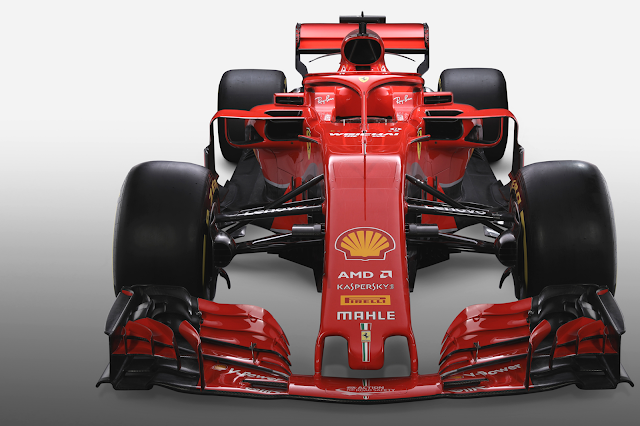 Ferrari made huge strides with the introduction of the new regulations for 2017 and so like the difficult second album for musicians it left us wondering whether they could follow up their smash hit this year.

The good news for Ferrari fans is that although the SF71H is clearly an evolution of its predecessor it's also packed with impressive features that gives hope that they've made another decent step. The higher rake philosophy used during 2017 stays but the wheelbase has been lengthened slightly in order to accommodate the weight distribution targets which have been affected by adding the halo. This has also allowed the designers to make subtle improvements to the flow around the car itself. 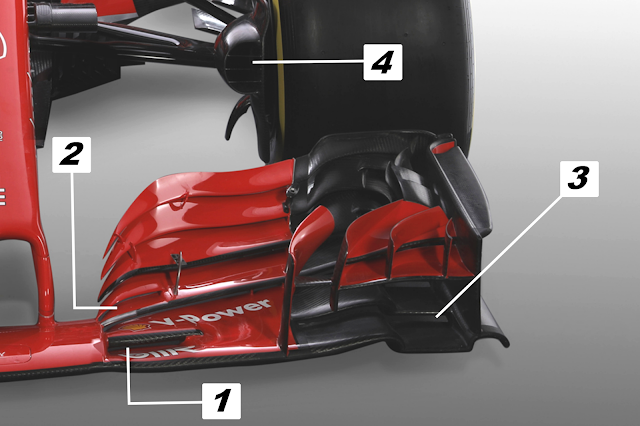 The front wing is likely to change during testing and the opening phase of the championship. However, it does feature a less than conventional pair of slots in the mainplane, which as you can see are separated by a closed off section. The inboard slot [1] is likely used to activate the Y250 vortex in a specific way, working in tandem with the flap tips, the lowermost of which that also connects to the mainplane features another short slot [2], in a similar vein to what we saw Toro Rosso and McLaren utilise last year. The outer slot [3] is conventionally placed and serves the usual purpose of improving the wings efficiency and reducing pitch sensitivity but it’s an interesting aside that they’ve opted not to combine the two, raising the importance and function of each individual slot.

The front brake duct scoop [4] has been reduced in size this year, as the team look to minimise the impact it has on the surrounding airflow. It cannot be completely eradicated like some teams have done, simply taking in airflow in between the vertical fence and the tyres sidewall, as it also supplies a quantity of the airflow it gathers to the blown axle, which is once again part of the front end aero concept. 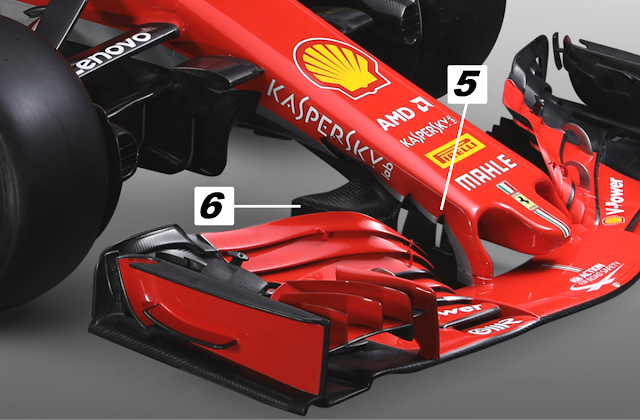 The pillars that connect the front wing and nose are clearly inspired by those run by McLaren in 2016/17. A hole is embedded in the side of the forward element of the pillar [5], joined by a slot between it and the larger fluted rearward pillar extension [6], both of which help to move flow between the long shapely appendages and undoubtedly improve flow around and under the nose. This most likely improves the Y250 vortex which runs alongside too, making it a little more robust as it shapes it and steals less energy from it whilst it’s in its infancy. 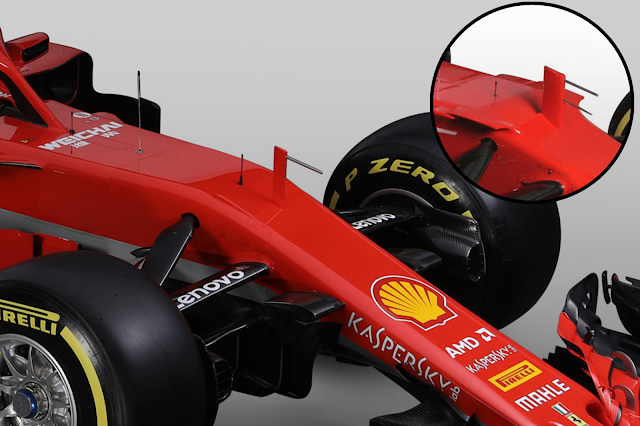 The car retains a similar ‘S’ duct setup to its predecessor but it's worth noting that the SF70H featured a pair of winglets that flanked the ‘S’ duct, assisting with the flow transition, which are missing this year. 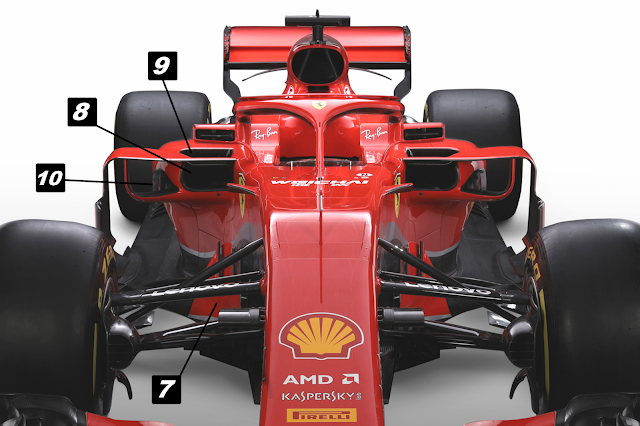 The bargeboards [7] are a direct descendant of the ones redesigned and run toward the end of last season, reaching quite far forward, arched away from the chassis but running parallel with it at their highest point they help to drive flow around the sidepod. The length, position and shape of the bargeboards are possible due to the three vertical serrations in bargeboards, which allow airflow to bleed between the surface, reducing separation and increasing their operating window.

The team have ramped up the design of their sidepods even further in 2018, having been the first team to utilize the low-slung upper side impact spar in 2017 that has substantially been adopted by a large percentage of this years field.

Placing the spar in this lower position gives the designers considerably more freedom with which to shape and position the sidepod, bringing with it the ability to create substantial aerodynamic gains. It’s clear by the number of teams that have followed in their footsteps that the idea holds significant promise and as such Ferrari have gone a step further this year, being even more aggressive than they were in 2017.

The main forward facing inlet is notably smaller than last year [8], deepening the undercut and allowing a much larger passageway for the air to flow around. However, with the now even more extremely angled radiators placed within needing to be fed airflow to maintain their cooling efficiency the upper inlet [9] has been moved ever so slightly rearward and grown in size to accommodate it.

The extremely tight inlet has been left in free air this year, rather than being obfuscated by the flow conditioning device they utilized ahead of it last year. The devices shaping has been retained though but pushed back in order to flank the corner of the sidepod, with a leading edge slat both framing the upper corner and connecting it to the revised deflector. Meanwhile another flow device is connected beneath too, complete with a pair of vortex generators [10] that are pinched into the socket at the side of the sidepod, stopping airflow getting pinched in the corner and improve flow down its length. 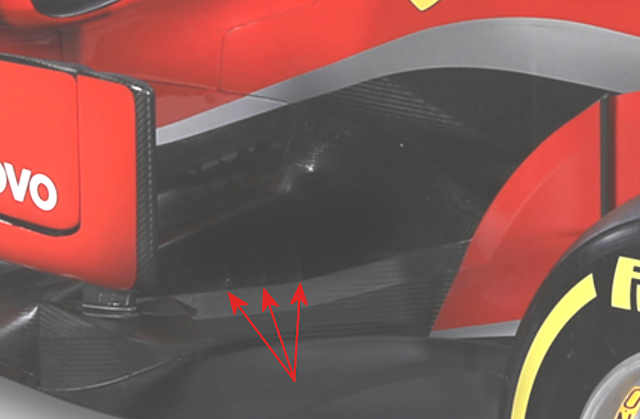 There's design convergence afoot under the curved leading edge of the floor, with the Scuderia evaluating and assimilating an idea first used by Mercedes and subsequently run by Red Bull in their Hungary update. The strakes, which protrude from the floors leading edge help to deal with the tubulence that upswept area of the floor recieves courtesy of the wake generated by the front tyre and the remnants of any wayward airflow generated by the bargeboards, cleaning up the flow before it follows the floor to the diffuser. Force India also evaluated a similar design in Mexico last season giving rise to a trend that will likely sweep the grid in due course. 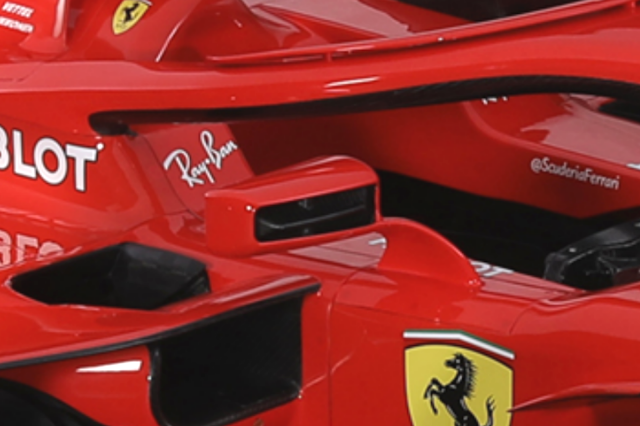 Ferrari have left no stone unturned in their pursuit of Mercedes and have come up with a very neat solution for their wing mirrors, the front of the casing has been left completely void in order that the airflow normally presented with a bluff body see’s a aerodynamically advantageous shape instead. The airflow essentially travels through the mirror casing and around the mirror glass, in order to improve the efficiency of the upper surface of the sidepod and the top mounted inlet. 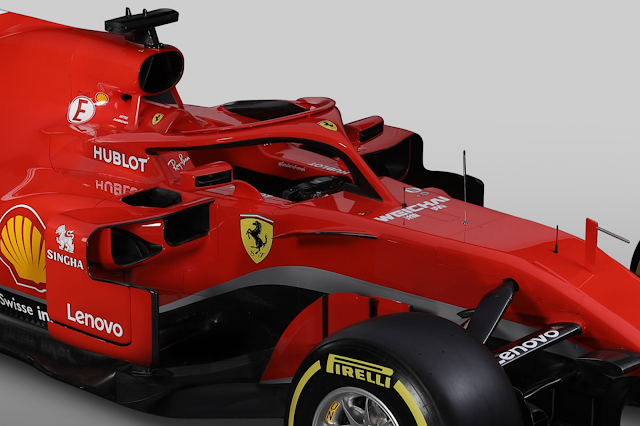 The Halo’s titanium structure has been outfitted with a fairing, of which the teams have a tolerance of 20mm to work with. Ferrari have opted to place a relatively simple hooped winglet atop theirs, as they look to minimise the aerodynamic turbulence created by the structure and draw airflow back down under the airbox. The airbox itself has been redesigned, accommodating the need for extra cooling that the team made adjustments for at the Malaysian GP last year. 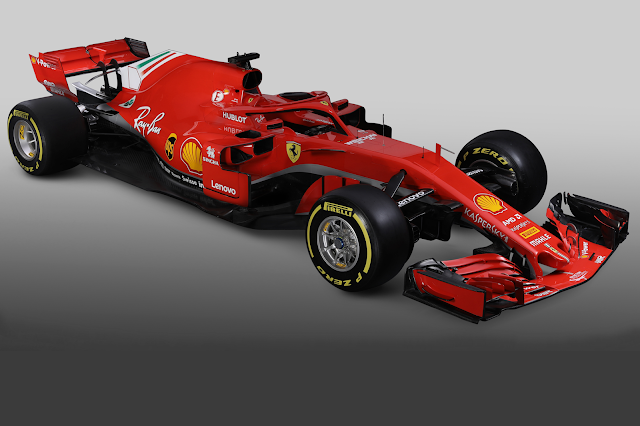 The sidepods are extremely well wrapped, tapering into a tight coke bottle region, whilst the engine cover has been resized and is outfitted with a curved lower T-Wing, both of which maximize the area of freedom allowed within the new regulations. Meanwhile, the rear wing is a carryover from 2017 and subject to changes as the team hits the track in the coming days.

Altogether I'm extremely pleased with what Ferrari have offered, with the SF71-H seemingly an advancement over its predecessor. It's difficult to say where they'll stack up when compared to Mercedes and Red Bull, given their launch cars are generally composed of plenty of placeholders, whereas the Ferrari is not. However, the early signs are positive, so lets see what happens when they all hit the track....

Don't forget if you like the content I create I'm trying to ramp things up for 2018 and will be providing full car illustrations for most of the field, I'll update these throughout the season to give a 'story mode' of their development throughout. You'll be able to follow this by contributing via my Patreon page - www.Patreon.com/SomersF1