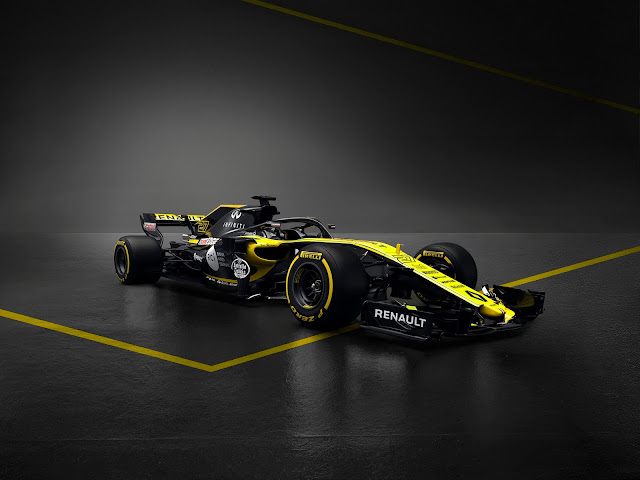 The RS18 was the fifth car to be released ahead of pre-season testing and is frankly, livery aside, the most disappointing. A large percentage of the car can be classed as carryover from its predecessor and without looking too closely one might mistake it for last years car with a halo tacked on. 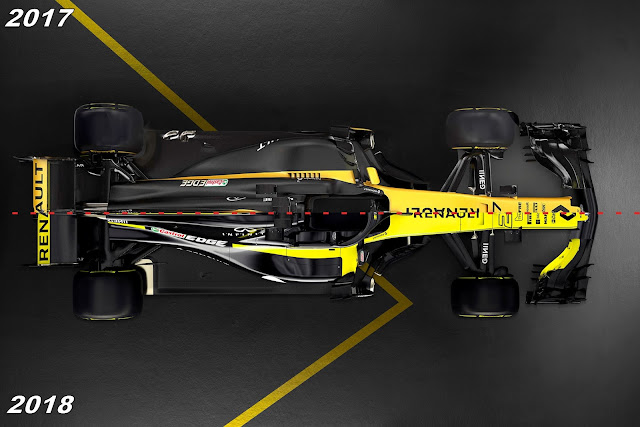 However, studying the images more closely does bear some fruit, with a comparison of both cars from above highlighting a shift in the cars wheelbase, which has been lengthened for 2018. It’s a trait exhibited by most of the field so far, converging on Mercedes overall concept, which helps to deal with the tyres in a more frugal manner - viewed as critical for 2018 given each compound has been lowered by a step, a softer and harder tyre added to the range in order to mix strategy and 2 and 3 stop races placed firmly on Pirelli’s menu.


The longer wheelbase also brings with it some advantages in terms of aerodynamic consistency, with the wider tyres having presented problems to the designers in their first year under the new regulations, something they’re working hard on overcoming this season. Considering this concern it’s odd that Renault are thus far the only team not to utilise an extravagant sidepod solution, either by means of lowering the side impact support spar or as in Sauber’s case creating a secondary more rearward inlet atop an already slender main inlet.


In those instances the primary objective is to get clean flow into and around the sidepod, pushing back the inlet in order that it’s not as affected by the front tyre wake as it would be using a conventionally positioned pod, presenting the opportunity to alter the cars overall centre of pressure and have an impact on the cars weight distribution, something that has been fouled up by the introduction of the halo.


Generally the lack of development in this area of the car gives the impression that Renault may have missed a beat, or they have something even more aggressive hidden up their sleeve that they are trying to hide by showing only renders, seeing as the physical car used in the photoshoot with team personnel was an RS17 mocked up to look like the new car.


I remain hopeful, yet unconvinced of the latter given the lead time to testing is now very short and everyone else’s design is essentially locked in, with their development programme very much committed to the concept they’ve already chosen given Renault no real reason to be coy at this stage.


The top-down overview comparison does provide some solace in regard to the sidepods though, with the longer wheelbase enabling a tighter curvature of the bodywork into the coke bottle region, which should allow a much tidier flow of airflow over the floor at the rear of the car. 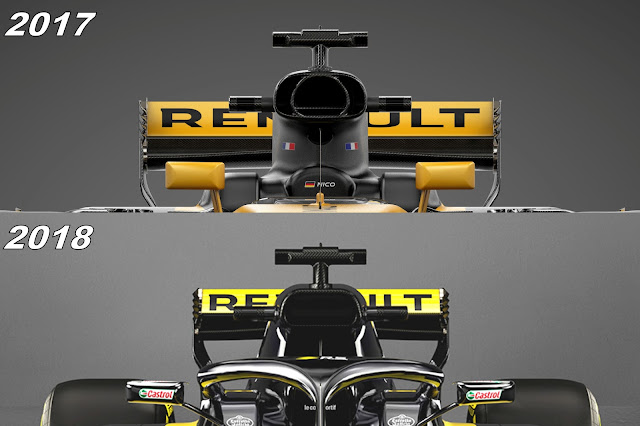 The car’s airbox has also been revised, with the design team keen to limit the effect the halo has on the powerunits performance. The lofty periscope style inlet has been retained but its shape appears to be shorter and more boxy.


The rest of the car is littered with placeholders, that will change during the course of pre-season testing and the first race of the season, with the front wing, turning vanes, bargeboards, diffuser and rear wing all items already seen last year. 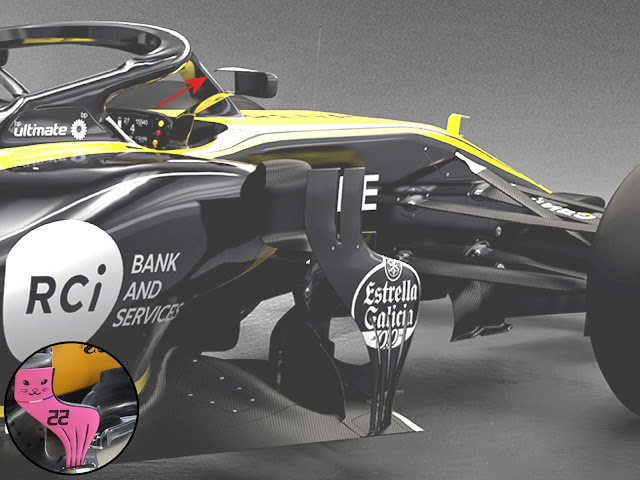 Meanwhile, there are some consolation prizes for us to pick over too, with last years ‘Aerocat’ - aptly named by the team due to its uncanny resemblance to a feline, sporting a slot that would effectively give it two heads, whilst the team have opted for some very McLaren-esque wing mirrors (arrowed), framed by some aerodynamically aggressive extensions. 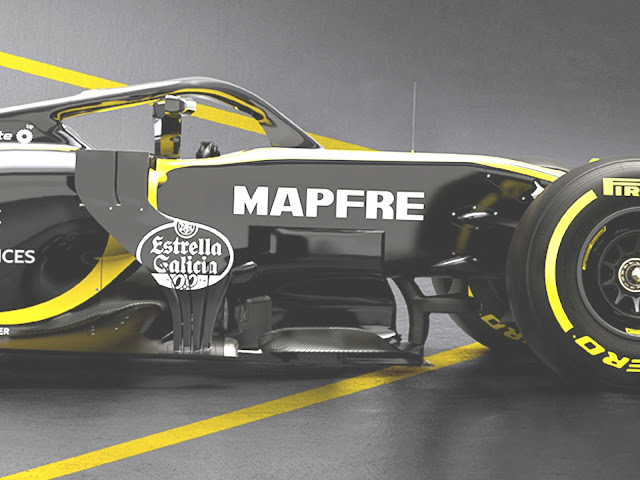 Underneath the tub we find the splitter support which has been shaped very similarly in recent years but this year has been joined to the ride height sensor (a trick used by Toro Rosso before), making use of the pairing to influence the airflow in that region.

At this stage, running in this configuration (which they clearly won't), they'd be attempting to do what Red Bull tried and abandoned in the opening phase of 2017. In conclusion the RS18 is a rather underwhelming design at this stage, minding me of when a parent says "I'm not angry, just dissapointed". However, I remain optimistic, hoping that we are all part of some elaborate joke and not part of a reality where they've spent all their money on a fancy driver line-up, a better powerunit and a new espresso machine to keep all their new sponsors and partners entertained.

Don't forget if you like the content I create I'm trying to ramp things up for 2018 and will be providing full car illustrations for most of the field, I'll update these throughout the season to give a 'story mode' of their development throughout. You'll be able to follow this by contributing via my Patreon page - www.Patreon.com/SomersF1
Tagged
Newer Post Older Post