Red Bull, the canny media operator, have launched their 2018 challenger - the RB14 with a special livery that has got fans going "Please keep it", "That's amazing", all whilst knowing they'll get another injection of media buzz when they unveil their race livery in Barcelona.


This all comes with the team having moved forward their schedule for 2018, albeit only by a week, as a sign of their intent to get out of the blocks earlier this year. They were the team on the move last season and undoubtedy had the largest leap in terms of performance from day one to the chequered flag in Abu Dhabi. However, whilst their 2017 campaign was fraught with development issues from a chassis and aerodynamic perspective - having had correlation issues, caused by the switch to wider cars, their 2018 campaign may be held back by the very same issue that has been a thorn in their side since 2014 - the powerunit.


The Red Bull and Renault alliance has been on shaky ground ever since the French outfit bought back into the sport as a 'Works' entity, ploughing more and more resource into their own efforts, at the expense of the close relationship that had been forged with Red Bull at the tail end of the V8 era.

2018 is supposed to be last year of this tie-up, and with Mercedes and Ferrari extremely unlikely to supply one of their closest adversaries it seems that Red Bull may have to do some extreme sucking up to Renault or drink the Honda kool-aid, just as their sister team Toro Rosso have had to this year.


It'll be interesting to see how these relationships unwind during 2018, as antagonising the French supplier will only lead to a reduction in information and co-operation, which will hurt their championship chances. On the flip side it'll be fascinating to see how they interact with their potential bedfellow for 2019 - Honda.

From a technical perspective the RB14 is once again an evolution of its forebears, retaining much of the DNA of the RB13 but also taking on ideas seen elsewhere on the grid. 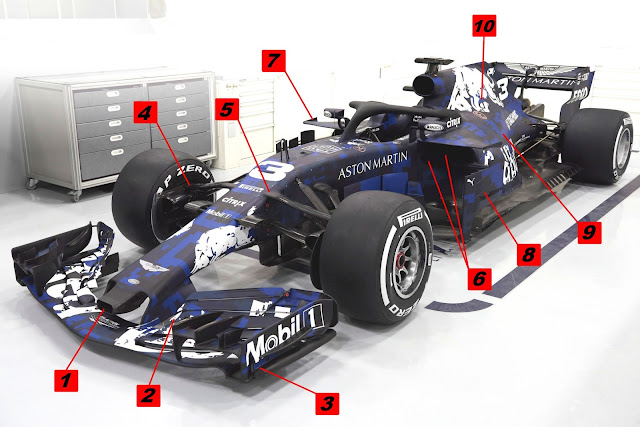 The open ended nose tip [1] utilised throughout 2017 makes a triumphant return allowing the oncoming airflow a less obstructed pathway under the nose. Meanwhile, the front wing is a carry over from last year, with the drooped flap tips [2] on display that were used at the post season test in Abu Dhabi. Elsewhere the team continue to distance themselves from much of the field, especially with their endplate/footplate interpretation [3].

The car retains a similar setup in terms of the nose shape, camera supports, ‘S’ duct, brake ducts, blown axle and turning vanes, the latter of which will likely change during testing. However, the most intriguing part of this area of the RB14 is the way in which the suspension is mounted, with the outer connecting point raised up in a similar, albeit not as aggressive way to the choice made by Mercedes and Toro Rosso last season [4]. 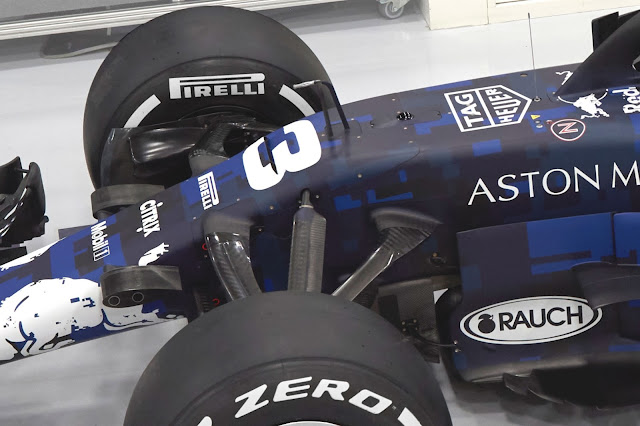 This has also led to an aggressive approach on the inboard end too, with supports that jut out from the chassis connecting them to the upper wishbone [5]. The forwardmost of these inner mounting points is exceptionally high, positioned relatively far forward and angled in a downward slope, meaning the wishbone sleeving is not only twisted but swept rearwards in order to have the desired aerodynamic effect. Meanwhile, the rear leg of the wishbone also has a chassis spar with which it connects and whilst it is less aggressively angled it is swept too, albeit in the opposing direction, and used to direct airflow around the revised sidepods.

The bargeboards are a development of the ones used by the team in the latter part of 2017, with an extra vertical panel assisting with the flow pattern that’s changed with the introduction of the new sidepod concept. This will undoubtedly be an area of intense development again throughout 2018, as the designers still come to terms with the freedom they have.
If the Haas and Williams reveals told us anything it was that most of the field would follow in Ferrari’s footsteps and utilise the low-slung position [6] for the side impact spar that they did in 2017. The introduction of a specification side impact spar for 2014 took away some of the creativity that had come to bear in previous seasons but, as the FIA put it would improve safety and reduce costs.

As we can see with the overlay the specification style spar had locked the designers into a similar design path, with the spar ordinarily traversing the area just above the inlet (see RB13, right), whereas the option taken by Ferrari in 2017 and copied by at least Haas, Williams and Red Bull in 2018 allows much more freedom, allowing the sidepod to be pushed back, limiting the aerodynamic inefficiencies created by the front wheel wake but is also creating an opportunity for the designers to alter the aerodynamic center of pressure and weight distribution of the car.
As you’d expect Red Bull have taken this concept and pushed the limits further, creating a very narrow periscope inlet [7], in as high a position as possible, which undoubtedly works well with the complex front suspension in order to get cool air through the sidepod, whilst also resulting in extremely tight packaging that’ll improve aerodynamic performance.

Flanking the sidepods we find a large array of deflector panels [8], taking what the team learnt from the introduction of their Ferrari style deflectors in Singapore last season and giving them a more Mercedes twist, utilising four vertical panels in order to protect the sidepods shoulder from the wake created by the front tyre and improve the flow of air along the cars length.

Astride the top of the sidepod we find a deltoid shaped winglet [8], similar to the one used by Toro Rosso in 2017, but rather than terminate at the sidepods shoulder it extends beyond it tapering off into an endplate that likely creates a vortex that influences the airflow passing around the sidepod, rear tyre and rear wing.

The sidepods themselves have a whiff of RB5/6 about them, such is there shrink wrapped appearance [9], which is staggering given the additional content required for the ancillary coolers associated with turbocharging and the hybrid systems.

The engine cover [10] features a collection of panels, rather than the single element used by the team in the last few seasons, suggesting that they intend to make more changes in this area as the season progresses, in order to improve cooling and aerodynamic performance. The team retains its single centreline support pillar for the rear wing but, they’ve utilised an inverted Y-Lon style appendage to surround the exhaust and then mount to the top of the crash structure this year, rather than having it mounted to the engine cover.

The RB14 appears to be a very well put together machine, taking the best technical elements of Red Bull's late charge in 2017 and combining it with the novelties used elsewhere on the grid. What will be interesting to see going forward is how much scope for development the team have throughout the season.


Don't forget if you like my content I'm trying to ramp things up for 2018 and will be providing full car illustrations for most of the field, that I'll update throughout the season to give a 'story mode' of their development throughout. You'll be able to follow this by contributing via my Patreon page - www.Patreon.com/SomersF1