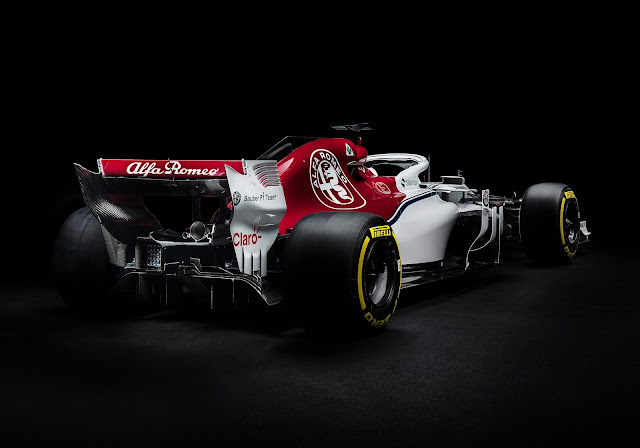 Sauber are the fourth team to release images of their car ahead of the new season and it’s worth noting that the C37 has several bold and interesting features. 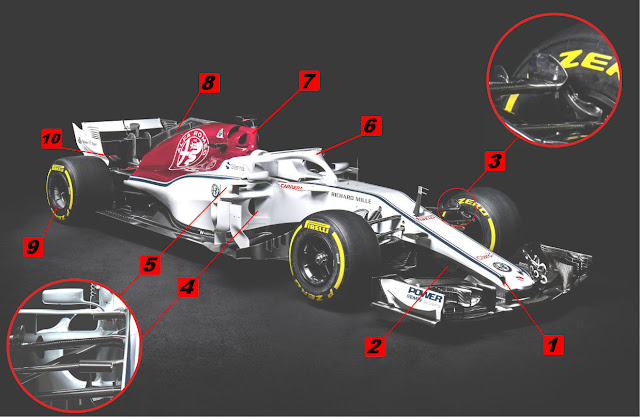 As you cast your eyes over the car the first thing that strikes you as noteworthy is the inlets created either side of the thumb style nose tip [1]. They’re similar to the ‘nostrils’ used by Force India since 2015, with the intent of improving the flow around the cars frontal section, which has also seen the front axle moved forward, inline with an increase in wheelbase as a direct consequence of using the 2018 Ferrari powerunit.


Aft of this the team have added some control vanes on the side of the nose [2], influencing the expected improvement in the airflow in that region, a design choice already used by the other two Ferrari powered teams during 2017 and augmented further by at least Haas so far in 2018. It’s unclear at this point whether the inlet for the ‘S’ duct resides under the nose at this point of the car or whether it’s been joined upto the nostril inlets. Similarly the launch images reveal what looks like a double ‘S’ duct outlet, one ahead and one behind the Pirelli logo, however, the forwardmost one may well be just a convex panel that ‘trips’ the airflow on its way to the ‘S’ duct and the nose/chassis transition.

The car shown is completely devoid of brake duct fairings, which is either a sign of them not being ready for the launch or that the team didn't want to disclose their design ahead of the pre-season tests.


Interestingly the team have adopted the raised upright position for the suspension [3] as used by Mercedes and Toro Rosso in 2017, the intent of which is to give more flexibility in terms of setup, an improvement on the management of the tyres and places the entire upper wishbone into a more aerodynamically desirable position. 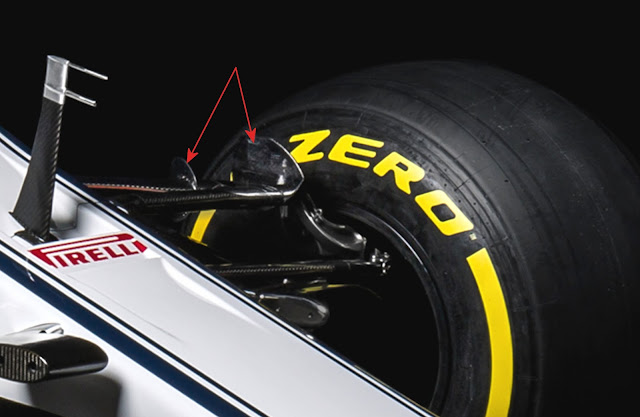 However, Sauber have gone one stage further, as vortex generators have been placed on both the forward and rearward leg of the upper wishbone to maximize how the airflow moves around that region, reshaping the wake generated by the front tyre that may also be detrimental to the performance of the floor, sidepods and rear wing downstream. 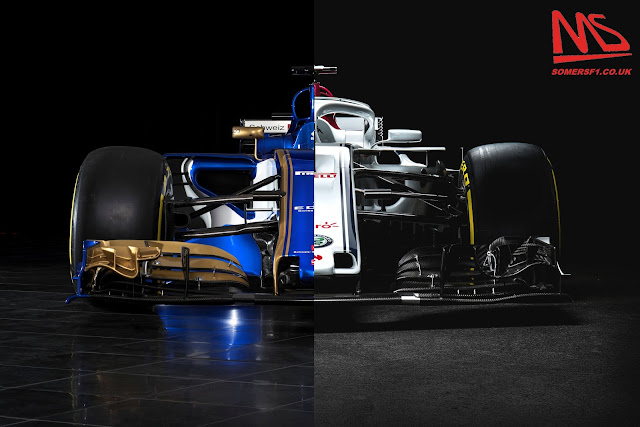 The C37’s sidepod layout may seem conventional when compared with the launches we’ve had so far - where those teams have lowered the upper side impact spar similarly to Ferrari’s 2017 design. However, on closer inspection the sidepod has been compacted vertically in order that the main inlet can be narrowed considerably [4]. 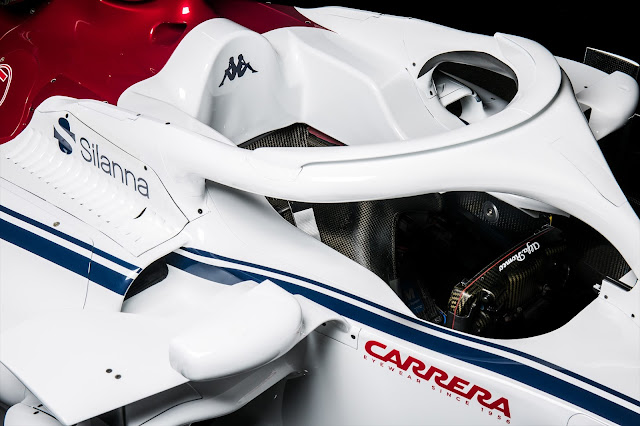 Furthermore, the team have a supplementary cooling inlet above the main one set slightly back down the sidepod [5] and partially disguised from certain angles by the sidepod slat, which resides in quite a high position over the top of the lowered sidepods leading edge. Although not as large the inlet brings to mind Benetton’s 1989 challenger - the B188, which also sat atop the main sidepod inlet.


Although we’d seen teams utilise the 20mm of freedom for halo fairings in the last test of 2017, Sauber are the first to show their 2018 challenger with a winged, rather than streamlined, variant. 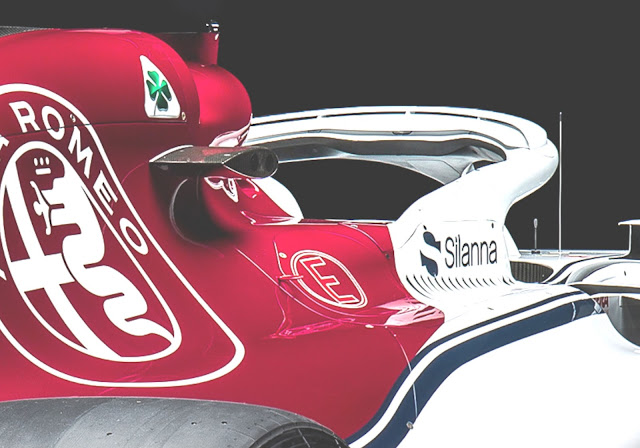 The halo fairing shown by the team features two large winged elements, both of which are used to realign the airflow, tidying up some of the aerodynamic inefficiencies the structure creates. 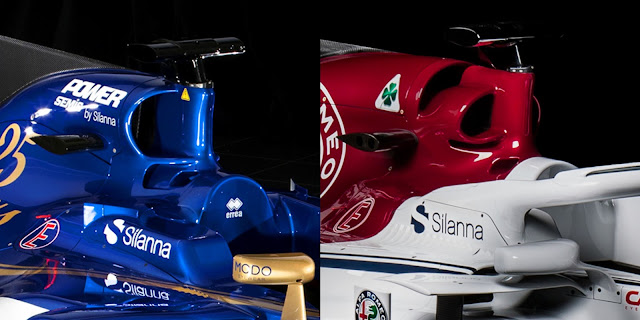 The bladed roll structure used in 2017 (left) has been retained, with the compartmentalised inlets also preserved, albeit made smaller, with a large inlet set further back over the top of the engine cover in order to deal with the revised airflow discharged by the halo.


Gone is the shark fin, as per the instructions of the FIA, replaced by a shorter version [8] similar to the one tested by the team toward the end of last season. You’ll also note the supplementary periscope inlet, which is another feature that the team used at points last season in order to maintain temperatures under the bodywork.


The team have worked with OZ on their wheel rim design for 2018 as they search for control over the airflow that passes through them and their relationship with the tyre in terms of temperatures. At the rear of the car they have taken on board a similar design used by Red Bull in 2017, with numerous ribs [9] used as a heatsink.


During 2017 both Mercedes and Ferrari utilised a duckbill style winglet on top of the rear crash structure. Similarly for 2018 Sauber have introduced such a winglet [10] in order that the exhaust plume be upwashed.

The rear wing has been developed slightly when compared to 2017 and is now supported by two pillars, rather than a single one that intersected the exhaust, likely due to trying to save weight and due to the fact that the exhaust must be longer this season.


Overall the C37 is an interesting machine that should see some decent gains for the team but, it really comes down to how that correlates with everyone else's improvement from last season.  Many elements of the car are direct descendants of the development work done by the team throughout 2017, including the front wing, turning vanes, bargeboards and floor, all of which are likely candidates to be revised as testing and the opening part of the season unfolds.


Don't forget if you like my content I'm trying to ramp things up for 2018 and will be providing full car illustrations for most of the field, that I'll update throughout the season to give a 'story mode' of their development throughout. You'll be able to follow this by contributing via my Patreon page - www.Patreon.com/SomersF1
Tagged
Newer Post Older Post