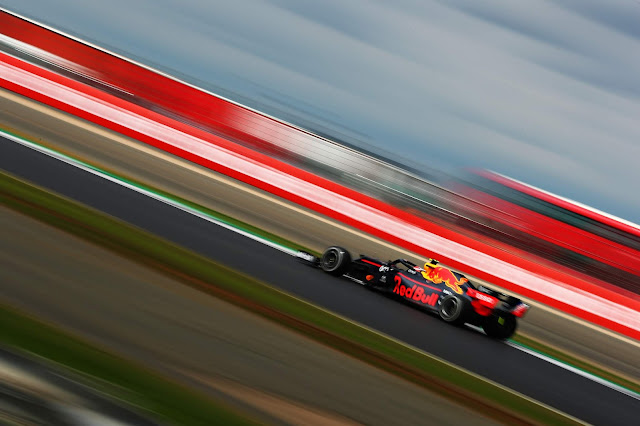 Usually a little slower out of the blocks, Red Bull publicly announced their intent to throw weight behind their 2019 campaign earlier than usual. This was an attempt to make early headway against Ferrari and Mercedes during a period where gains are easier to find with new rules.

This early shift in focus also had to be managed arm-in-arm with a change in powerunit supply, as the team jumped into bed with McLaren outcast - Honda. It’s a relationship that had been allowed to brew behind the scenes with their junior outfit - Toro Rosso, the pair seemingly working well in their first season with Honda making a sizeable leap forward on both performance and reliability throughout.

This new relationship has flourished, in part, due to both parties embracing the challenge of working with one another and whilst Honda had shunned McLaren’s advances to assist them in the early phase of the project they’re working hand-in-hand with Red Bull with ideas, funding and personnel straddling both projects.

It’s this harmony between different departments that’s helped Mercedes to profit from their entire operation since the hybrid era got under way, as working groups within mesh ideas together that don’t necessarily work in isolation.

As pre-season got into full-swing it was apparent that Red Bull were still a few beats off of their rivals and that adjustments would have to be made in order that they be able to profit from not only their learning phase of the new aerodynamic regulations but also how they needed to position the aerodynamic platform and chassis in order to maximise performance from the Honda powerunit, given it’s now in a much grander position than it had been.

As such, Red Bull have been busy back at Milton Keynes developing an update pathway that would help to unlock the RB15’s latent potential, a potential that’s started to surface in the last few Grand Prix.

As we can see from the chart the season opener had the gap pegged at around 8 tenths during qualifying, a gap that reduced over the next few races to around 5 tenths, with Spain and France being the outliers - suited more heavily to the Mercedes package and their ability to extract performance from the tyres than their counterparts at Red Bull.

However, that gap has shrunk massively at the last two rounds, with the performance gap during the race also lessened significantly, putting them in a position to not only usurp Ferrari but also take the fight to Mercedes.

So, let’s take a look at their updates throughout that period to try and glean just where that leap has occurred.
The development glide path of every team in the opening few rounds is pretty much set in stone, unless of course the team arrives at the first test and realise they’ve made a massive error. At that point a decision has to be made about whether to halt production immediately or continue to plough on, in the hope that those updates may actually help with the issues at hand. 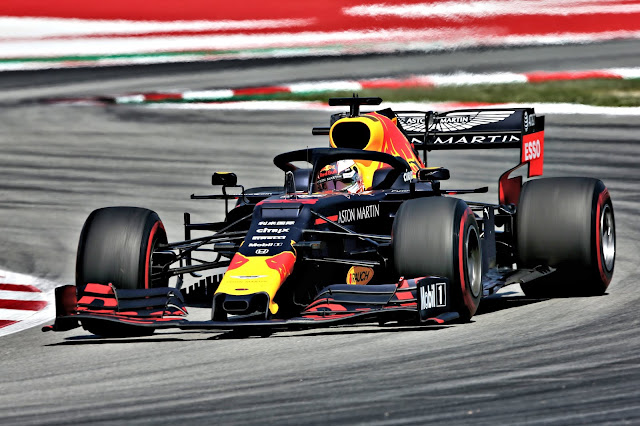 It’s the reason why we usually see an extensive update package arrive at round 5 of the championship, in Spain, as it’s a venue that the teams know inside out and already have data from pre-season testing in order to ascertain that the revamp is working as expected. The smaller alterations that you see in the chart are indicative of this, as are the sweeping changes made for Barcelona.

However, whilst substantial, the package taken to the Spanish GP didn’t ultimately bring swathes of performance, instead it looked to improve the cars balance and realign the L/D ratio of the car, inline with the gains made by Honda. Returning to the qualifying comparison chart it’s actually an outlier in a steady gap to the silver arrows and perhaps one created not only by a similarly powerful update introduced by Mercedes around that time, but also due to the fact that Red Bull and Honda had to relearn their approach to accommodate the changes.

Tyres also become a huge factor at this point in the season too, as whilst the team and sometimes more importantly the driver have learnt how to get the best from them over one lap and a stint, they must reset and respond to the changes that the aero has had on the behaviour of the car. 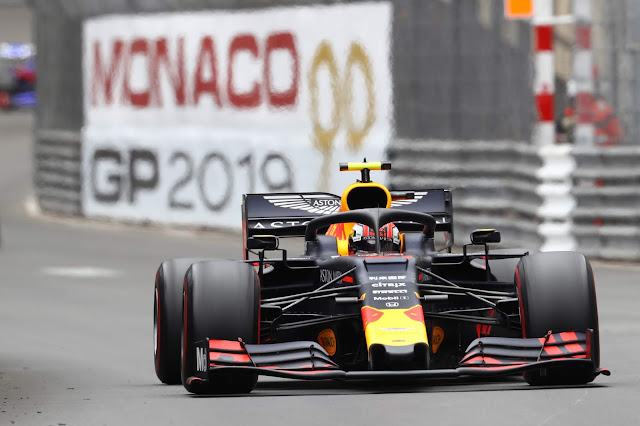 Monaco is always a relatively happy hunting ground for Monaco, the tight narrow street track playing to the chassis strengths of Red Bull and whilst they didn’t have what might be considered huge updates they did have some interesting ones.

The main one was a redesign of the nose, which would have required a new crash test, so not the making of a moment. The switch will have undoubtedly resulted in a slightly lighter structure too, as the design with a through-flow tip requires bulk in key areas in order to pass the crash test. This also raises aerodynamic question marks about the behaviour of the nose tip in relation to the surrounding airflow, especially its interaction with the front wings neutral section below. 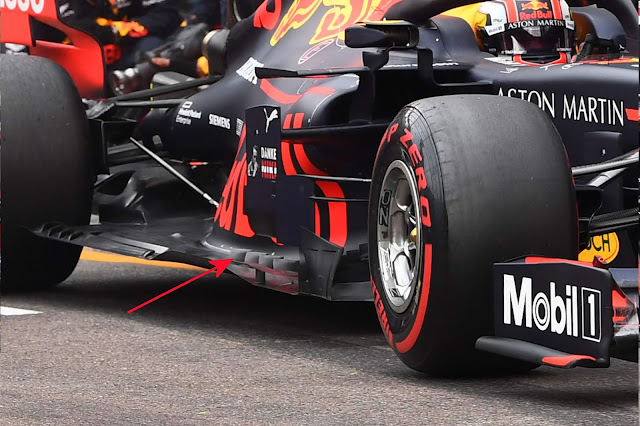 The team also had a new floor, complete with these four vanes on top of the longitudinal floor slots, guiding the airflow as it moves away from the bargeboard area, around the sidepod undercut and through the floor slot. These vanes just pick up that airflow and prevent it from becoming a turbulent mess that doesn’t do as it’s being told.

Canada saw a couple more minor modifications, including the nose horns that flank their ‘S’ duct and a revision to the outer portion of the diffuser but it was in France that we saw the team make another bold leap forward, and just like the last time they did that it came with some pain too, as we saw them with their furthest outright pace difference to Mercedes. The updates changed key design parameters on the RB15, with alterations made at both the front and rear that improve aerodynamic, chassis and powerunit performance. 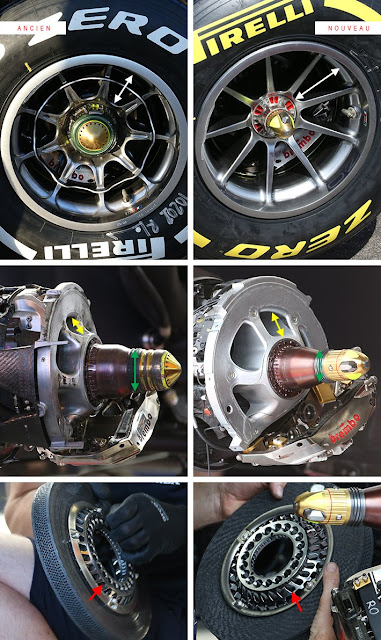 In this image from Nicolas Carpentiers of F1i.com we can see the different approach that the team have taken to the design of their front wheels and upright, which on the face of it might seem fairly innocuous, but is far from it, as they work as a unified system. 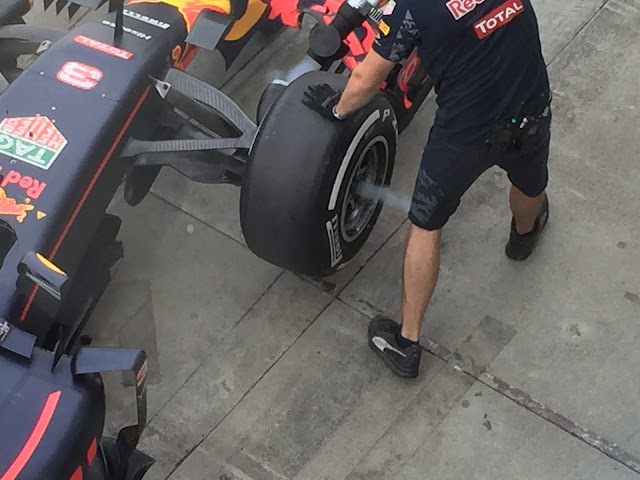 The regulation changes for 2019 prohibit the teams from using the open axle design they have used for years (see above, the mechanic is cooling the brakes and has inadvertently given us a display of the blown axle in action, albeit without the turbulent mess created by the wheel and tyre that it would then help to mitigate, as it follows this jet of air).

This ‘blown axle’ was a concept used extensively by Red Bull and enabled them to weaken the outwash requirements of the front wing and allow the designers to concentrate their efforts in other ways. 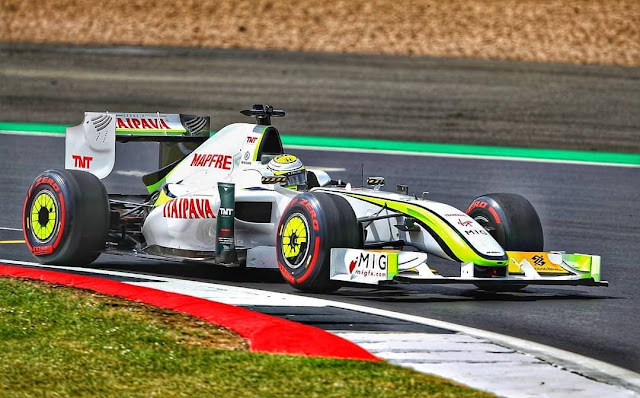 The through flow of airflow essentially lessened the turbulence created by the rotating wheel and tyre and acted in much the same way as the wheel rim covers that were en vogue circa 2007-09 and seen here in day-glo yellow on the BrawnGP BGP001.

Knowing how powerful such a design can be from an aerodynamic perspective they won’t give up on it and Red Bull already had design features in their pre-existing design, such as the band on the wheel rim which would guide airflow and the small holes in the axle which would emit some airflow to the outside. However, the new design is a much bolder concept and required an entirely new upright, brake assembly, brake duct, brake disc and wheel rim to achieve the required result. 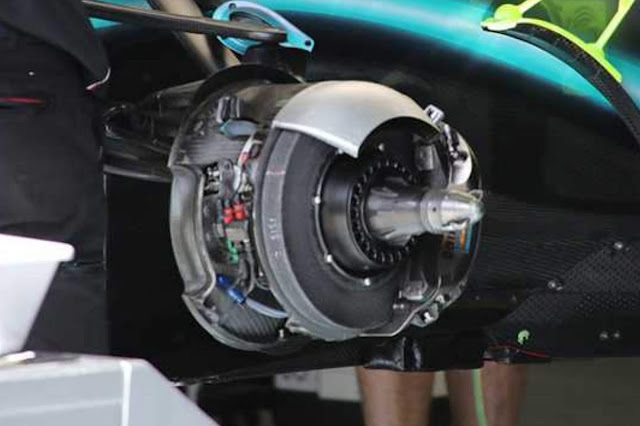 It’s a design that actually comes straight from the ‘follow the leader’ playbook too, as whilst Mercedes never actively sought to use a blown axle during the previous era they’ve used a similar design on the W10 since the start of the season, meaning their front wing has to do a little less work in terms of creating outwash too. 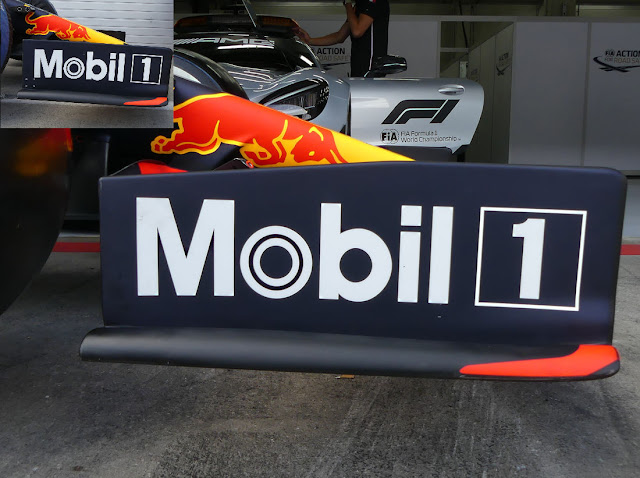 Again, these changes made by Red Bull have coincided with changes to the front wing, as they look to harmoniously harness both aerodynamic structures. This has resulted in the use of a tapered endplate, that alters how it interacts with the outboard upper profiles of the flaps and subsequently generates outwash. Meanwhile, the Y250 region has not gone unchecked either, with alterations to the leading edge of the mainplane and changes to the shape of the flap tips. 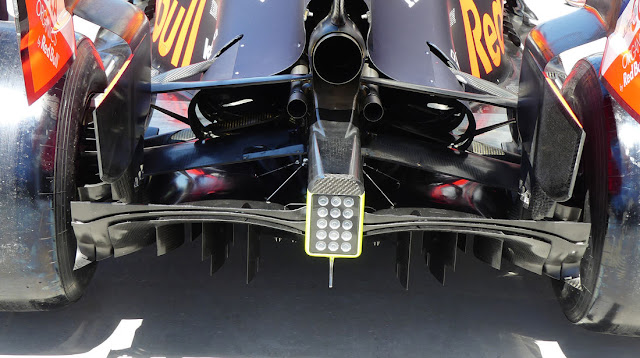 But, perhaps most interestingly Red Bull made several changes at the rear of the car too, some of which have circuit specificity in mind, such as the use of a T-Wing and an extra vertical slot on the leading edge of the rear wings transition, whilst others, such as the repositioning of the wastegate pipework has wide sweeping ramifications. These pipes had previously been mounted quite low on the RB15 (above) with any evacuating flow likely having a bearing on the cooling outlet they emerged from. 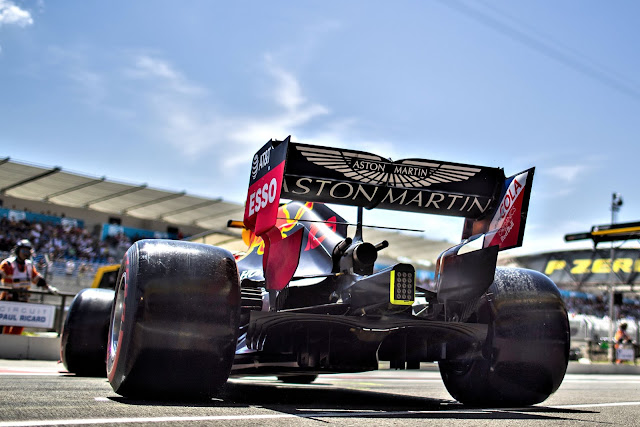 However, the new position is the highest and widest positioning we’ve seen from any team so far and begs the question - "When the wastegate is open are they throwing gas at the rear wing?" It’s a question and solution that’s been posed and trialled by many teams in the past, but given their experience with blowing techniques and their past experience of navigating an engine manufacturer toward such gains (as they did with Renault), it would be of no surprise to me that they’re leveraging some aerodynamic gains from the transitional period when the wastegate is open and the turbo is being driven by the MGU-H instead.

The performancee gap in France didn't make me think much of it at the time, but the Austrian GP really made me sit up and take notice, in fact, in a weekly discussion I have with a friend about Formula One my ‘hot take’ was their performance leap between France and Austria didn’t quite add up. Even taking into account the struggles that others encountered with the combination of heat and altitude at the Red Bull Ring and raised some questions about not only Red Bull’s improved performance but also how much Mercedes and Ferrari have been hurt by the supposed 7 technical directives that were issued ahead of the French GP.

Directives aside it’s clear to me that this is not a one-off and whilst their performance relative to Mercedes will clearly yo-yo over the course of the next few races, they seem to have found the necessary performance that’s pulled them well into the battle with Ferrari, if not beyond. As such, I look forward to the German GP and hope they have found what they need and can once again find themselves in the mix.

This post was made possible due to the kind donations of my Patrons. If you liked this post, or any of my content for that matter, please feel free to donate as little as $1 per month via my Patreon page.
Tagged
Newer Post Older Post