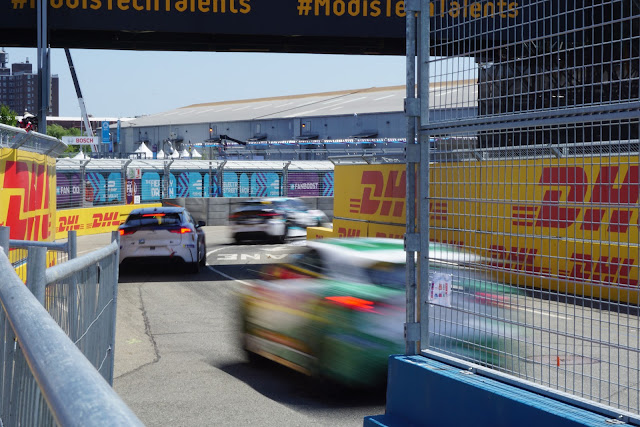 iPace Race 1 : It all started in qualifying. Brian Sellers, having not the greatest of sessions, gave the wall a bit of a swipe. He entered the pits, was cleared, but on his next high speed run coming out of T10 he had a suspension failure on the front that sent him into the wall and his entire crew into a high state of activity as they now had just under 5 hours to do a fairly major rebuild on the car.

It was a mistake that had championship implications as well, as with a win Sergio Jimenez would claim the inaugural Jaguar iPace Championship and Sellers had been his closest competition throughout, P2 going into the penultimate race of the season. As the cars took to the grid it was a lonely Brian Sellers, sat in the garage, talking with the head mechanic as every last hand was on deck, gathered round the stricken car, which was still jacked up with a tyre propped under the front end, where all the attention was focused.

As the cars rolled into their grid spots on the screens behind their heads, Sellers walked over and watched the lights go red one by one and then extinguish, the race starting without him. It was a good start from Jimenez, and given the constraints of the track there was little action early on, save for the Pros separating themselves from the Pro-Am's. Trailing Jimenez was Bueno, Evans and then Legge whilst Alesayi led the Pro Am category. At least until lap 8 when Z Zhang, trapped behind guest driver Hacking, took advantage of a door left open into T10 as hacking got offline and into the dust.

Zhang was up the inside but Hacking didn't yield and on exit there was the inevitable contact, which sent Hacking into the wall, shredding the right side of his car. After another lap with double waved yellows it was time for the Safety Car as the JCB was needed to remove the stricken vehicle. By time it was removed there was just enough time left on the clock for a single lap, and having obviously read the rule book, Jimenez was off while Bueno was still napping.

He closed Jimenez back down over the course of the final lap, but there was never a real threat and as the checquers fell it was Jimenez clinching the championship and Bueno vaulting ahead of Sellers into P2, to be settled for good in the final race of the season on Sunday.